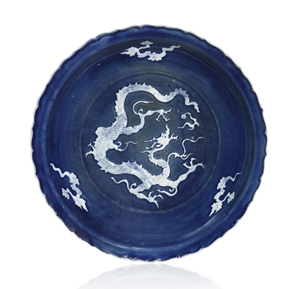 LONDON – A casual visitor wandering the broad, flower-adorned boulevards of the European Fine Art Fair (TEFAF) in Maastricht last week might reasonably have wondered how so many expensive, museum-quality works of art could possibly find buyers during the deepest recession Europe has seen in a generation. But many of those objects did sell. One partial explanation comes from a recent Forbes report on the world’s billionaires. The report found 1,645 billionaires in the world with an aggregate net worth of $6.4 trillion, up from $5.4 trillion a year ago, offering another reminder, if any were needed, that money makes money. Furthermore, the report revealed a record 268 new 10-figure fortunes, including 42 new women billionaires.

Such research is interesting enough, but while it would be wrong to assume that art buying at high-end art fairs is restricted to so-called Ultra High Net Worth Individuals (UHNWIs), there is no doubt that newly minted billionaires in the fast-developing economies of China, South America and the Middle East are having an impact on the art market. Indeed it was reportedly a Chinese buyer who paid one of the highest prices at the fair: $22 million for a Yuan Dynasty (1271-1368) blue and white porcelain dish decorated with a dragon chasing the flaming pearl. It was on the stand of Hong Kong dealers Littleton and Hennessy. (Fig. 1)

The TEFAF still feels like the classiest art fair in the world. Visitors this year were greeted by Alexander Calder’s 1969 monumental stabile, Janey Waney 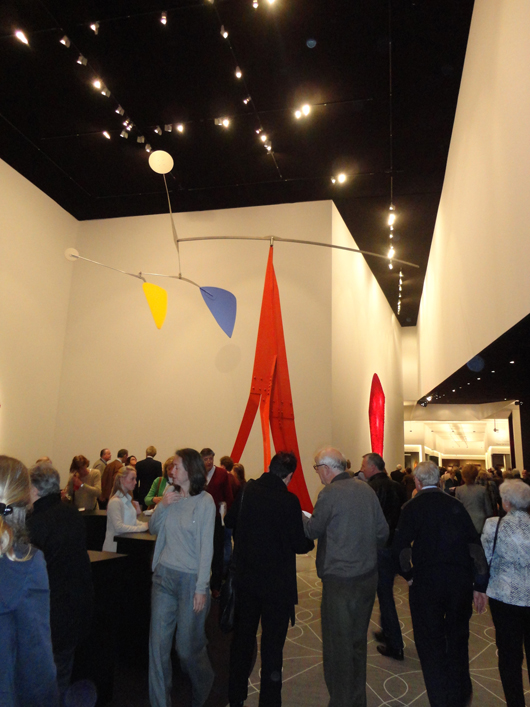 which, priced at $20 million by New York dealers Van de Weghe Fine Art, was surely aimed at the billionaire club revealed in the Forbes report.

Big-ticket prices are all very well, but what makes TEFAF so different from other fairs and so appealing to the casual visitor is its sense of inclusion. Unlike the proliferating contemporary art fairs that garner so much breathless media attention, the emphasis at the Maastricht fair is still on collecting and connoisseurship rather than pure financial speculation. It is by no means unusual to encounter an impromptu seminar into materials or techniques, such as the small group of people gathered on the stand of London dealer Sam Fogg where they were discussing the finer points of gilding and polychromy in early European devotional sculpture. 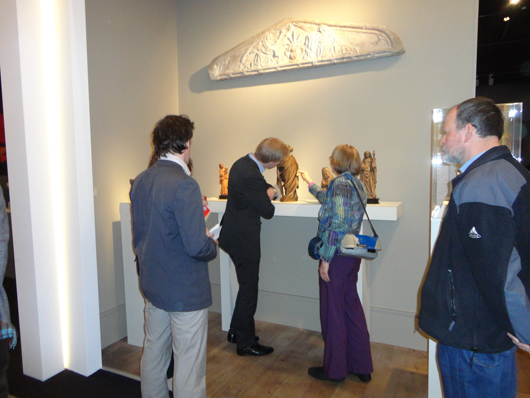 Visitors at the European Fine Art Fair in Maastricht investigating the gilding on an early European sculpture on the stand of London dealer Sam Fogg. Image Auction Central News.

Even works by Damien Hirst looked entirely at home among the ancient works of art. We were struck by the atmospheric display of Hirst’s butterfly works and animal sculptures on the stand of Leeds and London dealers Tomasso Brothers.

In the dramatic half-light of the stand, Hirst’s Styx, (2013), combining entomological specimens with Hammerite paint, might almost have been mistaken for a faience work by Bernard Palissy.

It was priced at £200,000 ($332,750) while The Dance, a pair of dangling animal skeletons cast in patinated silver and mounted on a four-legged stool, looked like Vesalius crossed with Marcel Duchamp.

‘The Dance’ by Damien Hirst, a work in patinated silver priced at £1,750,000 ($2.9 million) with Tomasso Brothers at the TEFAF Fair. Image Auction Central News. 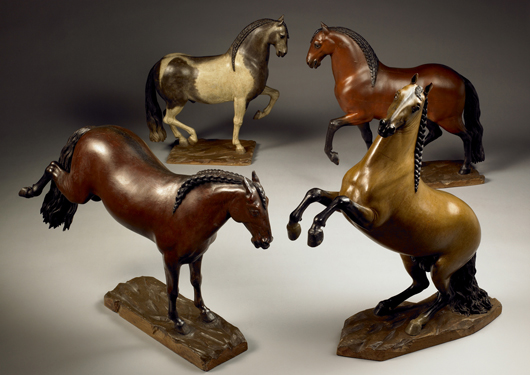 Four Spanish horses in polychromed wood by Juan Chaéz, priced in the region of €350,000 ($482,350) for the set, on the stand of Tomasso Brothers at TEFAF. Image courtesy Tomasso Brothers.

Last year the London-based Fine Art Society enjoyed a constant buzz around its stand thanks to an innovative work by British couple Rob and Nick Carter that combined fine art with computer animation. This year they exhibited a new work by the duo titled Transforming Nude Painting, showing a nude sleeping in a Renaissance landscape based on the famous Sleeping Venus, a 1510 work by Venetian artist Giorgione. 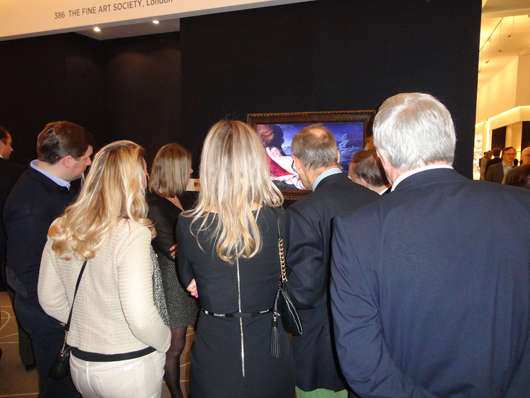 A new animated video work by British artists Rob and Nick Carter entitled ‘Transforming Nude Painting,’ based on a High Renaissance work by Giorgione, which was attracting curious onlookers at the stand of the Fine Art Society at the European Fine Art Fair. Image Auction Central News.

The Fine Art Society stand was constantly thronged with visitors clustered around the screen watching closely for the moment when the model, the memorably named Ivory Flame, made almost imperceptible movements. Her belly rose and fell with her breathing; her toe twitched; the background trees flickered in the breeze. We were on hand to witness Ivory open her eyes for a moment before falling back to sleep. The bewitching work, in an edition of 10, priced at £100,000 apiece, had sold out, perhaps demonstrating the enduring appeal of realism and verisimilitude in all its manifestations.

The trading performance of London furniture dealers Mallett has been under scrutiny by speculative market analysts for some time, but since their move to the stately premises of Ely House in Dover Street their fortunes seem to have markedly improved. Their stand at Maastricht looked particularly inviting. 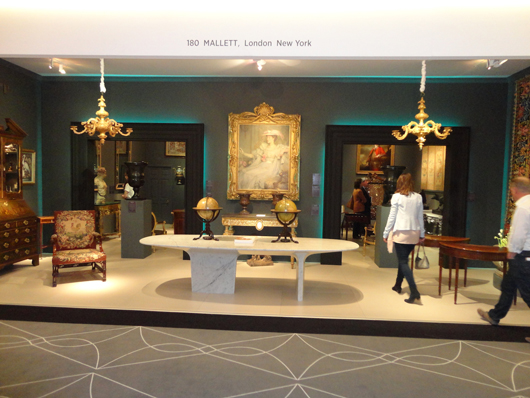 We strolled in to meet May Geolot who helpfully introduced us to two of their star objects – a superb pair of George II armchairs, formerly in the collection of the Spencer family of Althorp, and a Savonnerie woven wool six-panel screen after designs by Jean Baptiste Oudry. 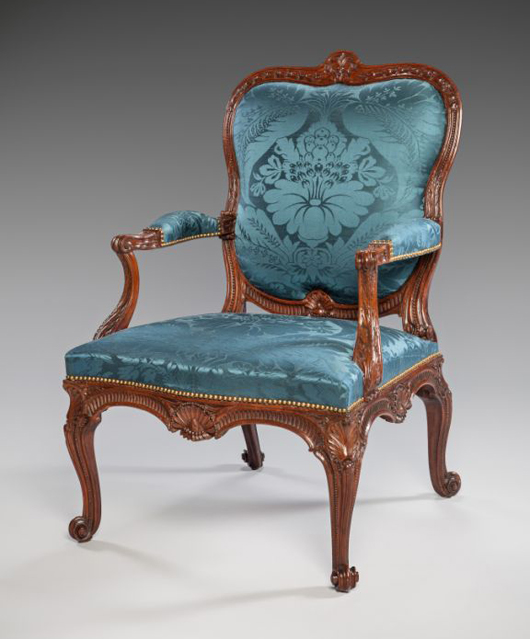 London dealers Mallett were offering this important pair of George II period armchairs in carved sabicu, known as the Spencer House Chairs. Originating from Althorp, the family home of the late Princess Diana, and attributed to John Gordon after designs by the famous architect and designer James ‘Athenian’ Stuart, they were priced at £1 million ($1,660,000). Image courtesy of Mallett.

At the European Fine Art Fair London dealers Mallett were looking for a buyer for this important and rare set of six Louis XV Savonnerie panels, circa 1735, decorated with scenes from Aesop’s fables by the great French still life painter Jean Baptiste Oudry. Image courtesy of Mallett.

As the above references to the Renaissance-inspired animated painting and the Damien Hirst works make clear, the European Fine Art Fair is not aimed only at the super-rich; it is also entertaining and hugely educational. Visiting the fair later in the week has its benefits – one finds many dealers only too happy to chat and share their knowledge.

The British Antique Dealers (BADA) Fair in London the week after the Maastricht event might take a leaf out of the TEFAF book. By comparison with its Dutch counterpart it looks and feels decidedly old-fashioned and sedate. It was so quite when I visited I almost fell asleep. Quite how one could bring such an event kicking and screaming into the 21st century would be an interesting challenge for a creative young entrepreneur. That said, the dealers we spoke to when we visited had done some business and at the end of the day that’s all that counts. Furthermore, the 18,500 visitors represented a 5.7 percent increase on the 2013 fair so BADA must be doing something right. The fair also attracts its fair share of celebrities with this year’s luminaries including minor royals, premiership footballers, British film star Julie Christie, rock entrepreneur Bob Geldof, and super-collector Charles Saatchi with his new squeeze, the TV personality Trinny Woodall.

We also spotted Sotheby’s specialist furniture consultant Christopher Payne admiring a fine, elegant table by English Arts and Crafts designer Edward Barnsley on the stand of Holly Johnson Antiques of Macclesfield. Commissioned by the previous owner in the 1960s and made from a lovely, golden-hued black bean wood, it was priced at £16,750 ($28,000). 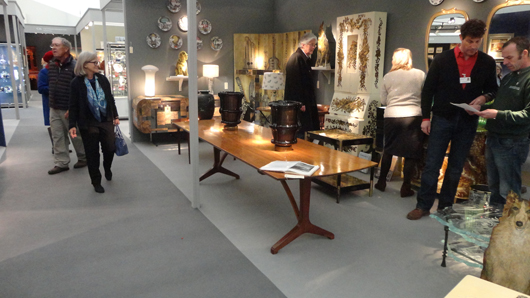 The stand of Holly Johnson Antiques at the British Antique Dealers’ Fair in London, featuring a fine dining table dating from the early 1960s by the English Arts and Crafts-influenced designer Edward Barnsley (foreground), priced at £16,750 ($28,000). Image Auction Central News.

It is not widely known that the Edward Barnsley Workshops survive in Froxfield, near Petersfield in Hampshire where they continue to create fine craftsman-built furniture. The exacting standards set by the late great Edward Barnsley (1900-1987) are still appreciated by a discerning clientele seeking unique pieces for specific locations. Give them a call and make a visit. 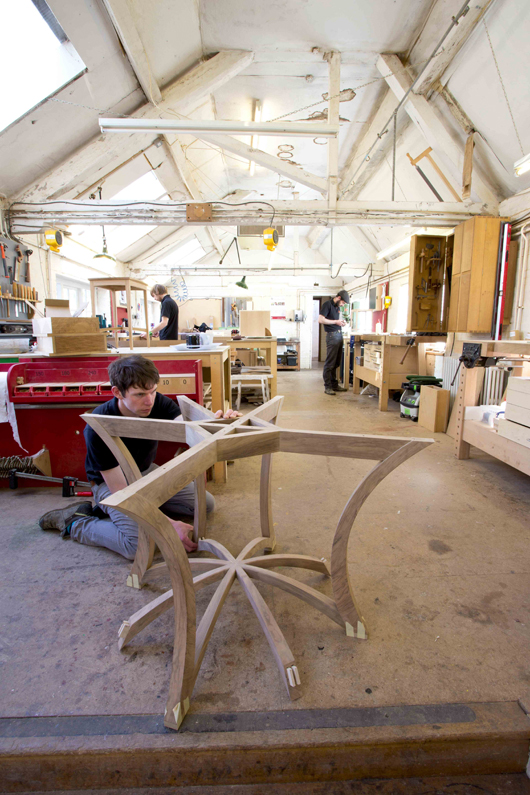 The Edward Barnsley Workshop near Petersfield, Hampshire, where exquisite, craftsman-designed furniture is still made to the same exacting standards established by their illustrious founder. Image courtesy of Edward Barnsley Studios. 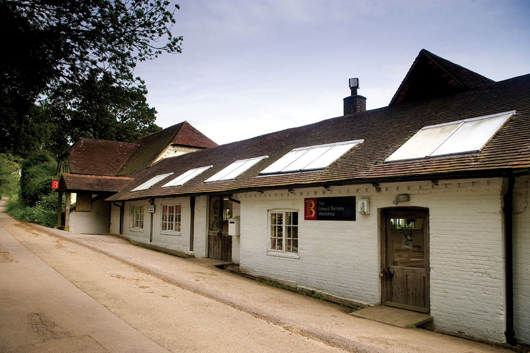 From a commercial perspective, one of many satisfactory outcomes at the BADA Fair was the successful sale by Sutcliffe Galleries of a recently rediscovered Orientalist oil on canvas by the 19th-century painter Jerry Barrett, titled Lady Mary Wortley Montague in Turkey. Lady Mary Montague seems to have done through her Turkish adventures what Emily Eden achieved on her Indian expeditions and the image captured her luxuriating in her Turkish finery. 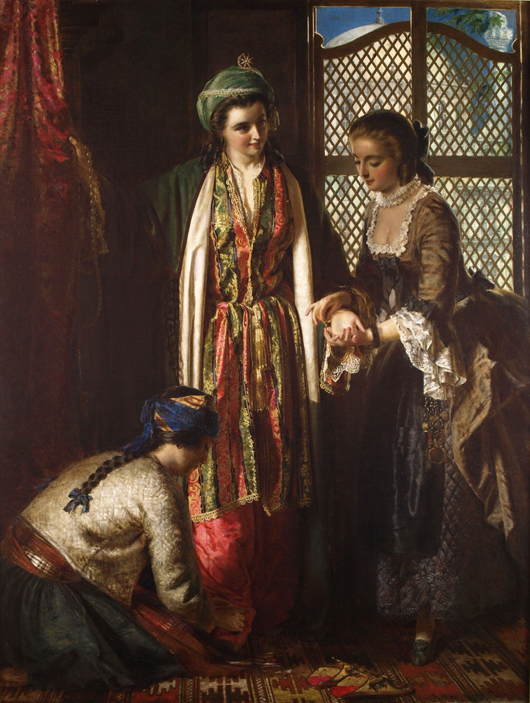 This oil on canvas titled ‘Lady Mary Wortley Montague in Turkey’ by Jerry Barrett (1824-1906) was among the highlights of the British Antique Dealers’ (BADA) Fair in Chelsea from March 19 to 25, where it sold at the asking price of £180,000 ($300,130) to a private UK buyer. Image courtesy of Sutcliffe Galleries.

It sold to a UK private collector for £180,000 ($300,130), vindicating the comment by BADA Fair director Gillian Craig, who said: “The dealers have an increased confidence in the market, which could be seen in the exceptional quality of the stock that they brought to the fair and was reflected in the very strong sales this year.”

It seems that the familiar truism of the art and antiques market still holds firm: quality sells. A few billionaires on hand also helps.