LONDON — Here the main political parties have begun the breathless sprint towards voting day for the general election on May 7. Never before has the likely outcome been so unpredictable, nor induced so many yawns from the public. Meanwhile, British summer time has officially begun. Daffodils line the roadside and the trees are brimful of blossom. This would normally put a spring in one’s step, but the unsavory prospect of the looming general election tends to take the shine off things.

On the upside, those of us fortunate enough to have attended this year’s installment of the European Fine Art Fair (TEFAF) in Maastricht, were treated to another intoxicating taste of available fine and decorative art. This brightened the month of March considerably, despite us being unable to make the purchases our hearts desired. Still, the entrance foyer looked stunning and as usual the fair provided another stimulating, if exhausting, visual treat.

Perhaps unsurprisingly, given the wealth that descends on Maastricht for TEFAF week, the organizers have been celebrating another successful year. This rather chimes with the latest findings of their annual research report, which indicated that the art market is blooming like the Dutch tulips that adorn the fair.

The art market blossoms: The aisles of the European Fine Art Fair in Maastricht were once again blooming with traditional tulips at this year’s event. Image Auction Central News.

Prior to the 2008 global credit crunch, the TEFAF report was registering annual global revenues of around 47 billion euros. It is often said that when a recession strikes, the art market feels the pinch later than other asset classes and rebounds sooner. That would seem to have been confirmed by this year’s report, which shows that while most European economies are languishing in the financial doldrums and the majority of working families are struggling to stay afloat, the art market has again taken flight. Its global revenues now stand at 51 billion euros, the highest ever recorded total. This might come as good news to those who see the art market as a foretaste of an imminent, broader economic recovery. Wiser minds know that it is little more than confirmation of how the rich continue to get richer, despite the economic crisis.

One does not have to be at TEFAF for long to get a sense of how seriously the trade takes these events, some claiming to do up to 50 percent of their annual business during the 10 days of the fair. The stand of Munich dealers Röbbig offered the clearest indication of how some dealers regard it as no longer enough to simply bring the stock. It also has to be shown within a convincing recreation of the interior of a Parisian aristocrat’s ancien régime hôtel, or the palace of some minor Hapsburg prince. 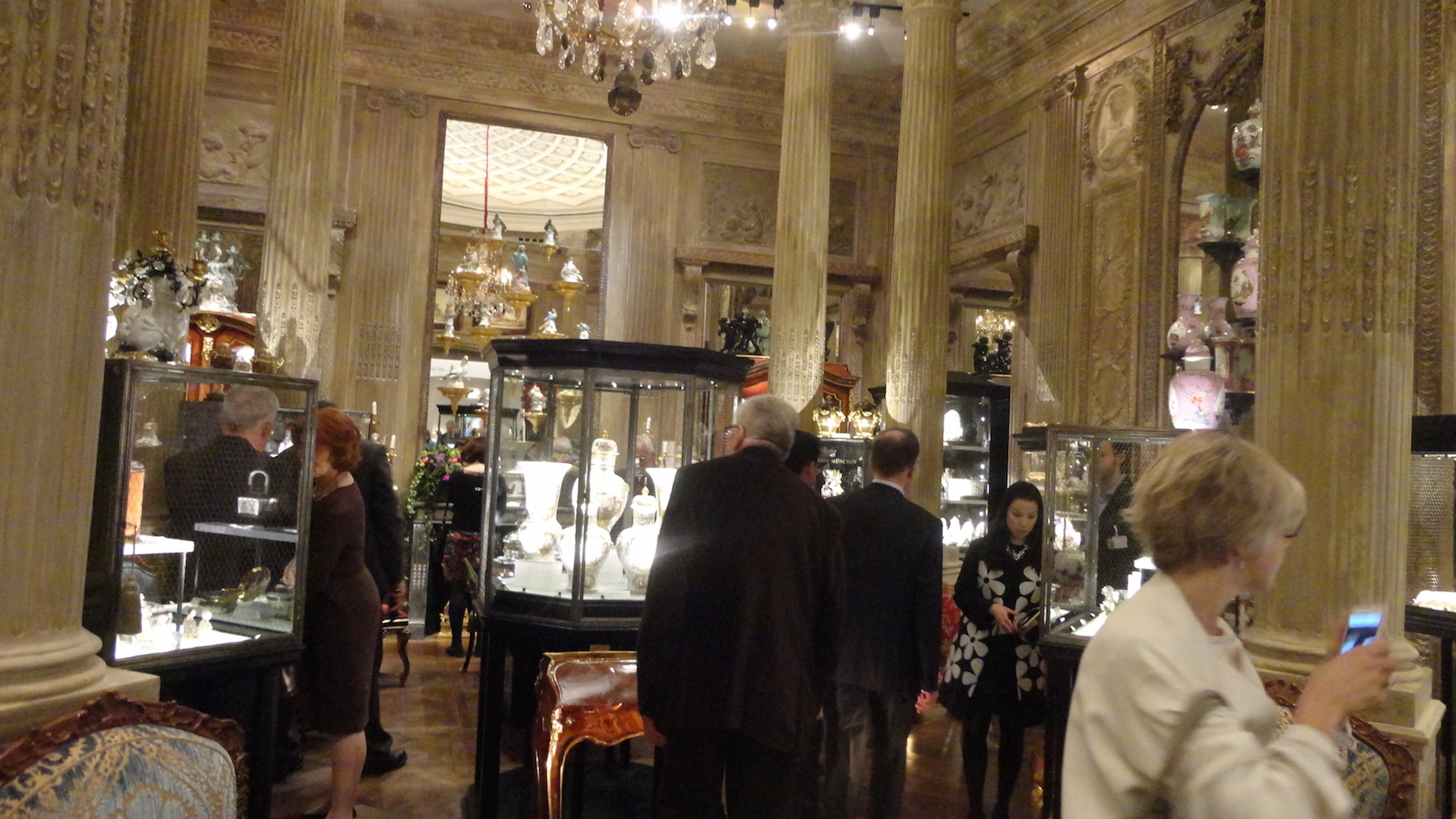 Peter Osborne, director of London-based Modern British dealers Osborne Samuel spoke to Auction Central News about the punishing travel schedule that dealers now have to undertake in order to keep pace with the event-driven global market. “This is the way it is now, and this is the future,” he said, commenting on the number of fairs stacked into a four-month period from March to July across several continents. “You simply have to go with it.”

The TEFAF fair traditionally has one or two blue-chip works of art in the Old Master category, but this year it seemed notably short on true masterpieces. It was, however, packed with antiquities of one kind or another, a worrying development given the widespread looting of ancient sites across the Middle East and developing world. We spotted a Cambodian statuette with no provenance to the label, a surprising omission at a fair as prestigious as Maastricht, particularly given how Cambodian temple sites are still being ravaged by subsistence looters. (Fig. 4) One assumes that this particular object has a legitimate provenance, even if it wasn’t clearly displayed as one might expect. 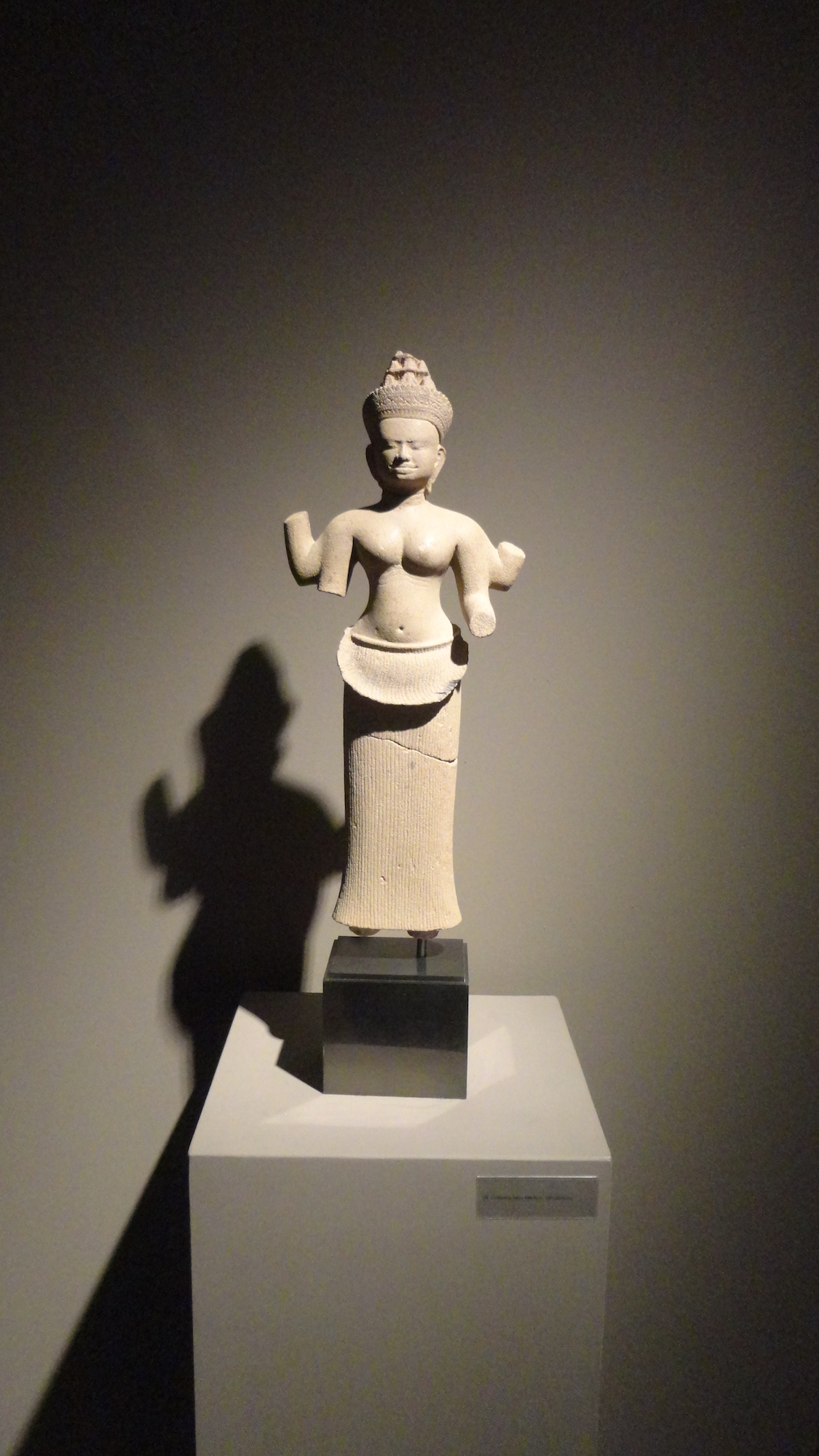 This 10th-century Cambodian statuette of a devi or goddess, from Pre-Rup in Angkor, was one of numerous antiquities on sale at the European Fine Art Fair in Maastricht in March. Image Auction Central News.

Should we take comfort from the fact that TEFAF is strictly vetted? Well, it has just emerged that a painting recently identified as having been looted by the Nazis from a Viennese family in 1944 was offered for sale at TEFAF just a few years ago. An enquiry to TEFAF’s organizers as to how this might have happened is yet to receive a response. 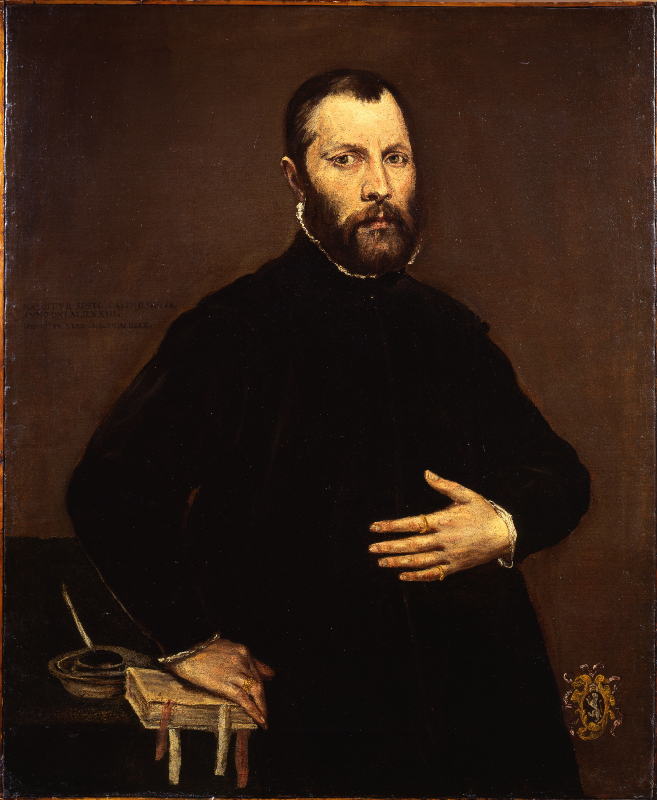 ‘Portrait of a Gentleman’ by El Greco, shown a few years ago at the European Fine Art Fair, and subsequently found to have been looted from a Viennese family by the Gestapo. It has now been restituted to the heirs of its original owner. Image courtesy the Commission for Looted Art in Europe and Art Recovery International.

The picture, Portrait of a Gentleman by El Greco, was seized by the Gestapo in 1944 from the noted Viennese industrialist Julius Priester, along with the entire Priester family collection. The portrait has now been restituted to the descendants of Julius Priester by the Commission for Looted Art In Europe working with Art Recovery International, the new London-based due diligence service for the international art trade.

Before moving on to a few other interesting events in the UK in the coming month, a brief mention of one or two of the more striking objects at the TEFAF fair. London and New York dealers Mallett have been enjoying a significant resurgence of good fortune over the past couple of years, seemingly since moving to their new premises at Ely House, Mayfair. Their TEFAF stand looked terrific, combining traditional furniture and works of art with a few selected works of modern design. These included a “Fig-Leaf” wardrobe by Dutch designer Tord Boontje, although the term wardrobe doesn’t really do it justice as the accompanying image shown here makes clear. 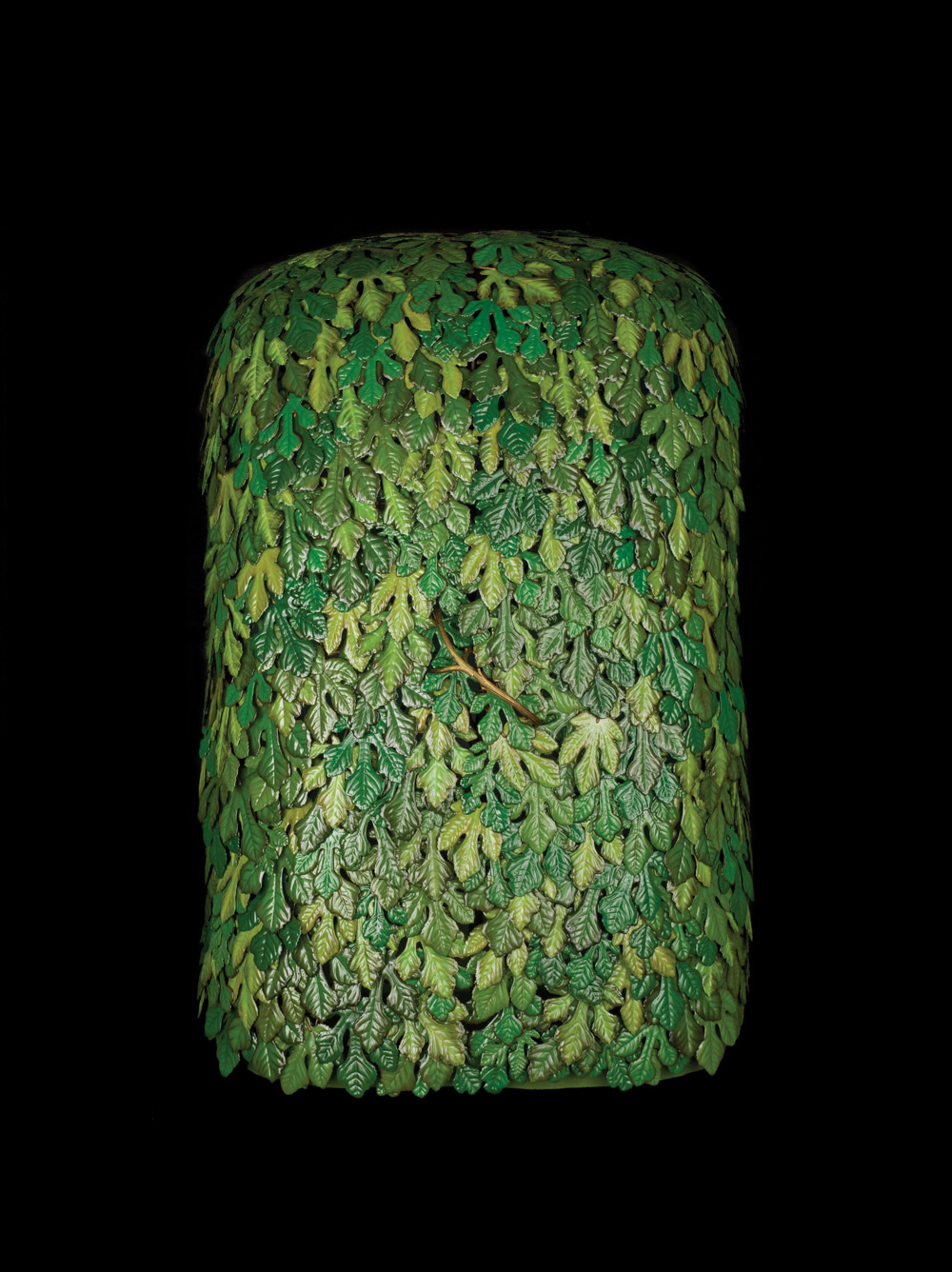 ‘Fig-Leaf,’ a bronze and enameled wardobe by Dutch designer Tord Boontje, featured on the stand of London and New York dealers Mallett at the European Fine Art Fair in Maastricht. Image courtesy of Mallett and Tord Boontje.

Fans of C.S. Lewis’ The Lion, the Witch and the Wardrobe might have nightmares with this in the room, but instead of opening onto Mr. Tumnus, a tree-form coat-hanger appears. Every leaf of the doors has been individually designed and enameled, making it a classic example of what is now being described as “meta-luxury.” Its innovative design and exquisite craftsmanship amply justified its price tag, which good manners (and the fact that it had sold) prevents us from disclosing. 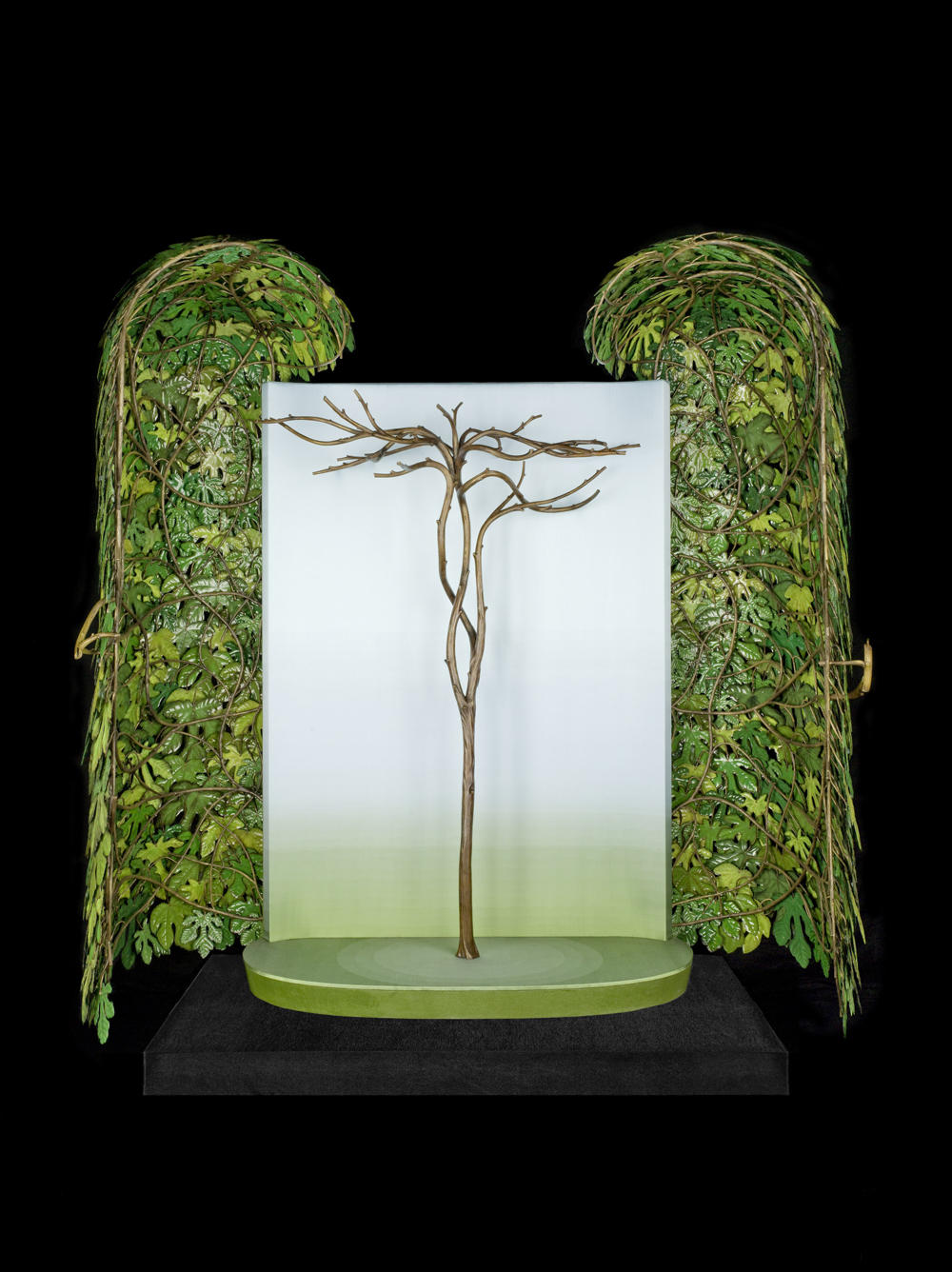 The open interior of Tord Boontje’s bronze and enameled ‘Fig-Leaf’ wardobe, with Mallett at the European Fine Art Fair in Maastricht in March. Image courtesy of Mallet and Tord Boontje.

Elsewhere Parisian dealer François Laffanour’s Galerie Downtown had teamed up with top-drawer art adviser and consultant Philippe Ségalot to present a superb display titled “Masterpieces of Shaker Design. Star” of the stand was a birch trestle table by a Massachusetts maker dating from 1840. It was long enough to accommodate the entire cast of Amish barn-builders from Harrison Ford’s Witness movie and yet it was constructed from a single plank of a noble birch tree. 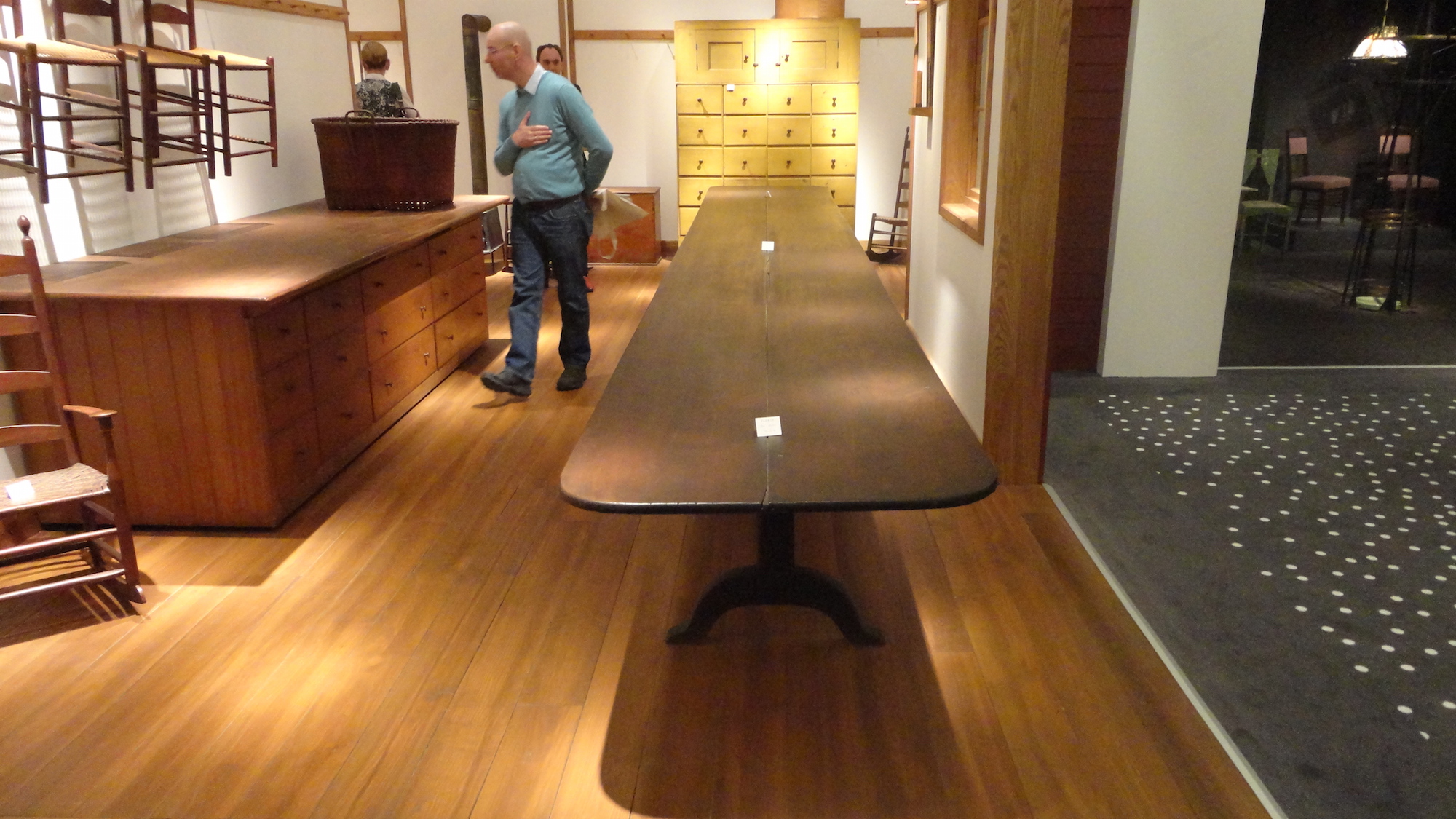 By now, most people will be suffering from a surfeit of fairs news but on a more local and affordable level it is worth casting a brief glance toward the Cotswolds Art and Antiques Dealers’ Fair, which opens on April 16 until April 19 at the famous Blenheim Palace in Woodstock, Oxfordshire. Now in its fourth year, the fair will host 24 exhibitors, all members of the Cotswolds Art and Antiques Dealers Association, so it comes with a stamp of quality. We have been alerted to far too many objects appearing at the fair to mention them all here, but we were struck by a splendid papier-mâché tea caddy decorated with a scene of cattle in a landscape by Henry Clay, circa 1800. It is priced at 5,500 pounds ($8,150) from Hampton Antiques, while Catherine Hunt Oriental Ceramics will no doubt be hoping for Asian interest in a transitional double gourd blue and white bottle vase priced at 13,500 pounds. 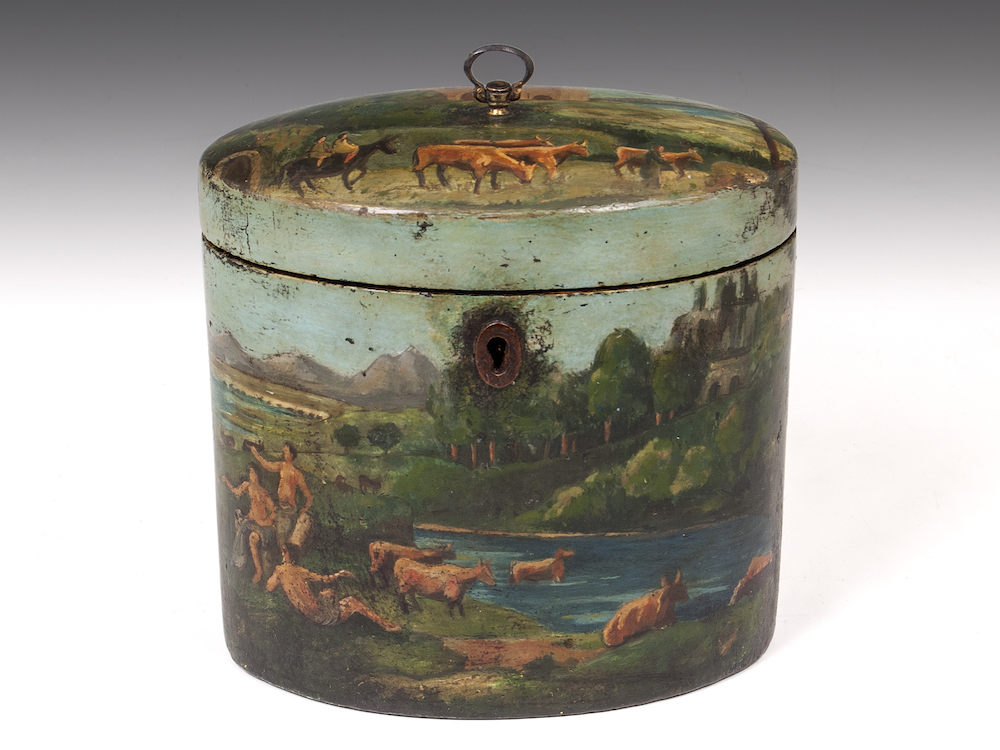 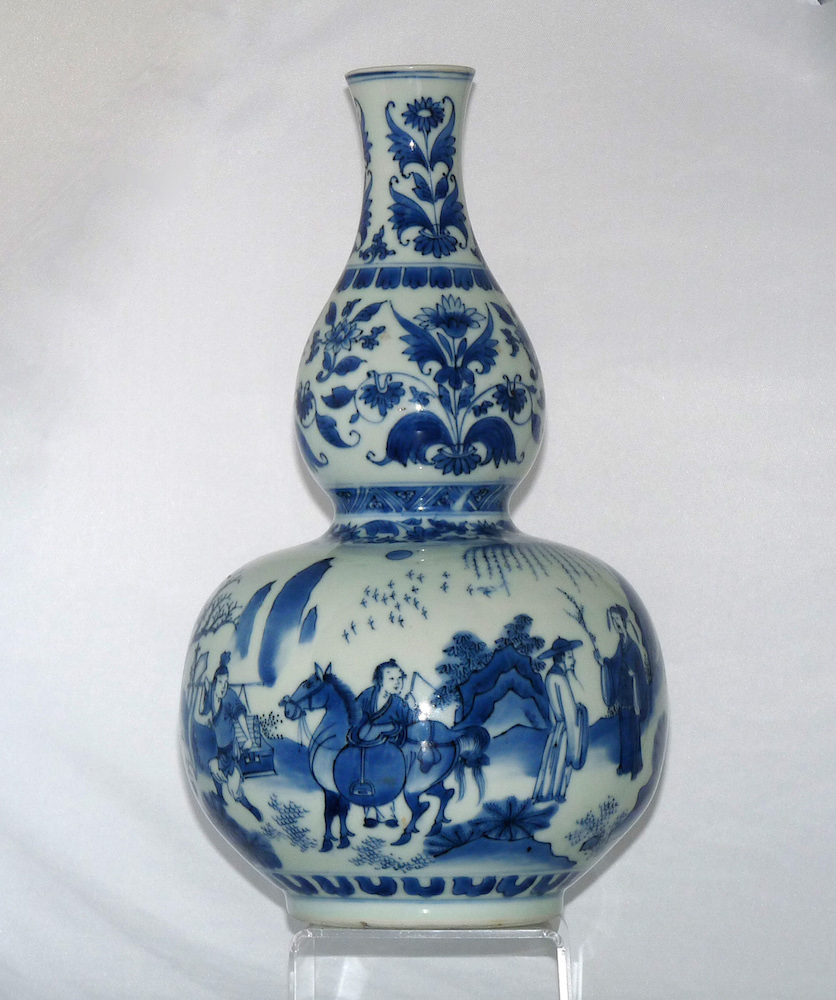 Finally, the ever-reliable Jerram Gallery in Sherborne, Dorset, is about to stage a mixed exhibition of new landscapes and still lifes by Charles Jamieson, Elsa Taylor and Vivienne Williams, which opens on April 11 until April 29. 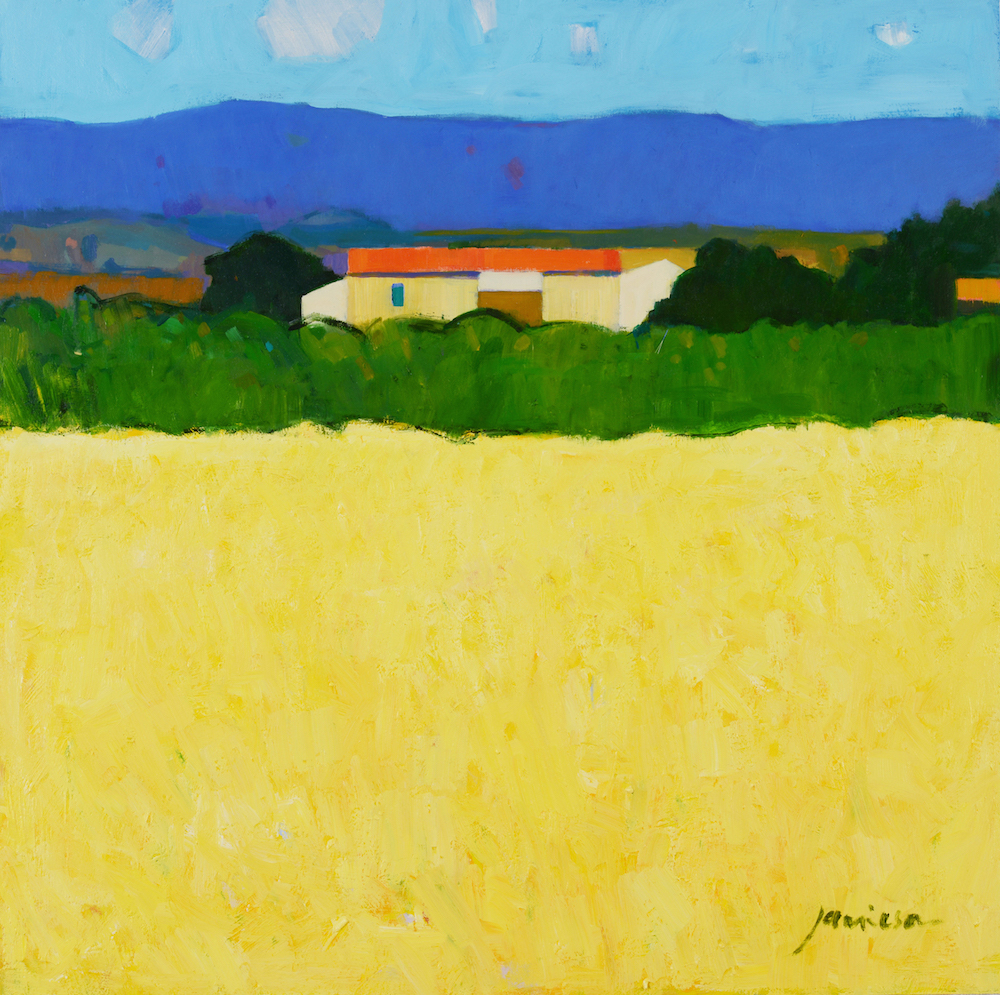 Charles Jamieson, ‘Yellow Field,’ oil on board, to be included in the Jerram Gallery’s group show of landscapes and still lifes in Sherborne, Dorset. Image courtesy of Jerram Gallery. 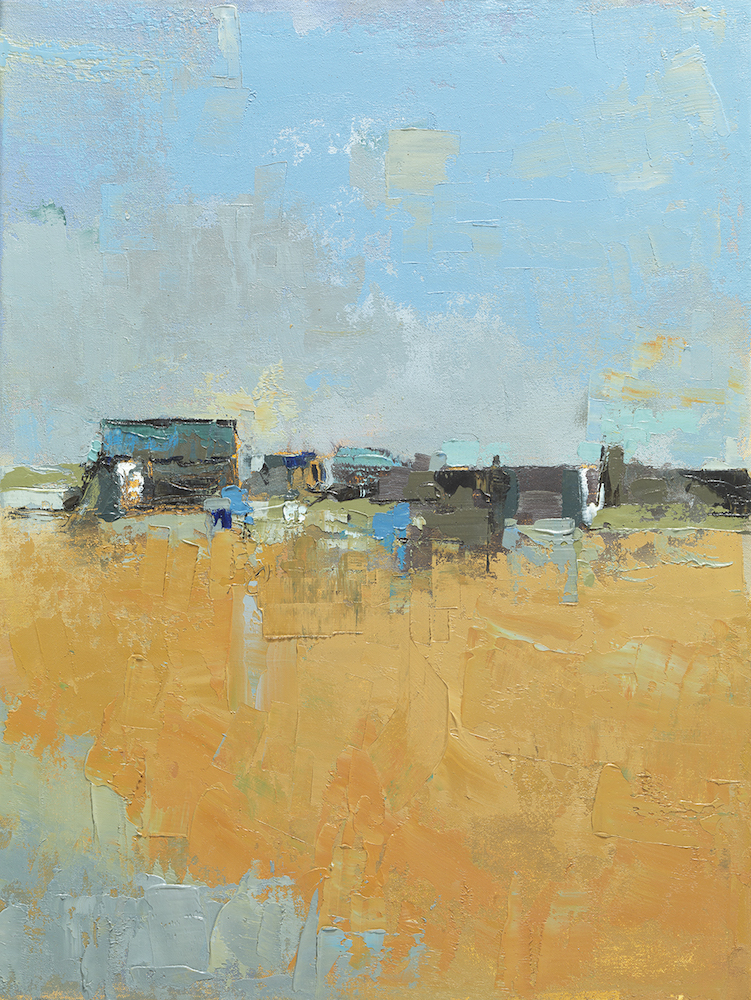 Exhibitions like this are a welcome reminder that the so-called “art market” comprises not only the high-ticket masterworks that so preoccupy the wealth-obsessed media, but also includes affordable work shown by regional galleries keen to support local artists and to serve the many less well-heeled, but no less passionate, collectors.

Next month we’ll be previewing an exhibition of works by Jeff Koons in, of all places, Norwich. Quite what the gentle folk of East Anglia will make of Jeff’s ironic take on popular culture remains to be seen.