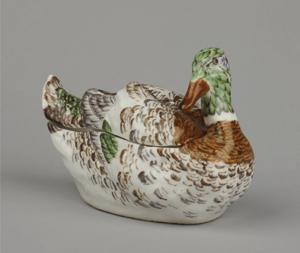 As an unpronounceable volcano in Iceland continues to belch clouds of ash across European airspace, interrupting flight schedules from Reykjavik to Rome, it is not only holiday makers who are looking with trepidation toward an uncertain summer. This June, London is hosting a string of new and established high-end art and antiques fairs whose organizers will be hoping to attract a significant influx of buyers from Europe, North America and beyond. Clear blue skies would help those aspirations.

Intrepid dealers and collectors who manage to fight their way through the dust clouds will find plenty of good reasons to stay in London for the month of June, the most significant being the venerable London International Fine Art Fair at Olympia, June 4-13, the new Art Antiques London fair at Kensington Gardens, June 9-16, and the new Masterpiece fair at the former Chelsea Barracks, June 24-29.

The June jamboree kicks off with the London International Fine Art Fair at Olympia, the focal point this year being Modern British Masters — a loan exhibition of 15 rarely seen paintings from the collection of rock star and former Roxy Music frontman Bryan Ferry. Ferry was an art student before he began warbling for Roxy Music so one expects to see a collection reflecting a cultured eye. The exhibition includes works by Sir William Orpen and Augustus John, confirming Ferry’s preference for the early 20th-century British avant-garde.

This year’s Olympia fair will also be notable for being the first event under the directorship of new owners David and Lee Ann Lester, who are seeking to breathe fresh energy into what had by broad consensus become a rather tired and uninspiring event, now in its 37th year. Some 150 dealers have signed up for the fair so it will be fascinating to see whether the new brooms will bring in better business. Volcanoes aside, there is also a recession to wrestle with.

Mid-June, meanwhile, sees the launch of the new Art Antiques London fair, organized by seasoned fairs impresarios Brian and Anna Haughton and set to take place in a custom-built marquee opposite the Royal Albert Hall in South Kensington. This is an interesting site for a number of reasons, not least of which is its proximity to the original site of the Great Exhibition of 1851 — the locus classicus of all fairs. More importantly, if it is successful, Art Antiques London could help set a new template for the South Kensington precinct, which is currently being transformed into what promises to be a new pedestrian-friendly, museum-rich cultural quarter.

The new fair also incorporates the International Ceramics Fair and Seminar. Given its location a few minutes stroll from the Victoria & Albert Museum’s new ceramics galleries, this could turn Art Antiques London into a must for ceramics lovers. Specialist ceramics dealers such as Robyn Robb and Paul Reeves will be among the many dealers unveiling prize pieces for the inaugural fair and doubtless hoping the crowds will materialize too. 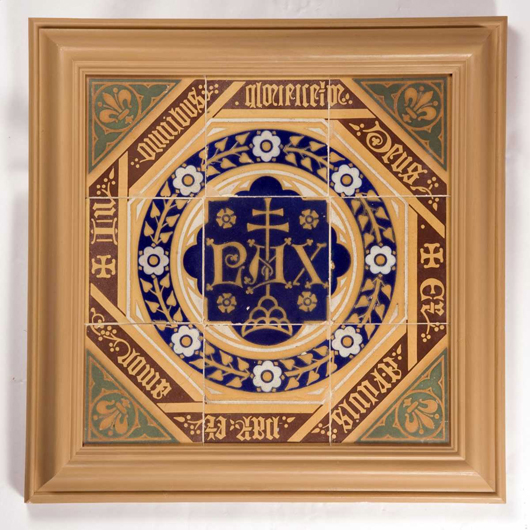 A panel of encaustic tiles by Robert Minton Taylor, designed by Edward Welby Pugin for Stanbrook Abbey, Worcestershire, circa 1870, which will be on show with specialist ceramics dealer Paul Reeves at Art Antiques London. Image courtesy Paul Reves and Art Antiques London.

Phase 2 of the V&A’s Ceramics Galleries — the Study Galleries — will open to the public on June 10, coinciding with the fair. Fairgoers holding an Art Antiques London ticket will have a unique opportunity to see the new Ceramics Study Galleries at a special preopening viewing as part of the Members’ Preview Day on June 9, 10 a.m-5:45 p.m.

The Masterpiece event is arguably the most interesting of the three big June fairs. It has been organised by four London dealers — Harry Apter of London furniture dealers Apter Frederick, Simon Phillips of Ronald Phillips, Robert Procop of Asprey, and Thomas Woodham-Smith of Mallett — who have put their heads together to try and fill the vacuum created by the demise of the Grosvenor House Art & Antiques Fair.

Their new event seeks to break the rather staid mold of traditional fairs by embracing luxury goods such as fine wines and classic cars as well as the usual art and antiques. For example, a highlight of this inaugural event will be a 1932 Bugatti from classic car specialists Fiskens and Coys, which will be for sale at an eye-watering £3 million ($4.35 million). Elsewhere the spread of objects on offer is broadly typical of the sort of thing one sees at the TEFAF fair in Maastricht every March, with many of the same exhibitors. It will be fascinating to see whether the fair’s organizers succeed in establishing a unique ambience that will set Masterpiece apart from its competitors. London Eye will be there to report on their efforts.

One other interesting June fair is the Russian, Eastern & Oriental Fine Art Fair at London’s Park Lane Hotel, June 10-12. Given that some 400,000 Russians are currently domicile in London, one expects this to be reasonably well attended, particularly since the volcanic ash has not yet had an adverse effect on taxi travel.

Max Rutherston, who is responsible for the Japanese activities of leading London-based Asian art dealer Sydney L. Moss, writes to tell us of his optimism about this year’s Park Lane event. A fluent Russian speaker, Rutherston has conducted a significant amount of business in the Russian-speaking world in recent months, specifically in the Ukraine, where he says there is particular interest in Japanese art, especially netsuke, swords and sword fittings. Given Sydney L. Moss’s established reputation in the field of netsuke, Rutherston is expecting lively business on the firm’s stand, where prices will range from £200 to £20,000 ($290 to $29,000). 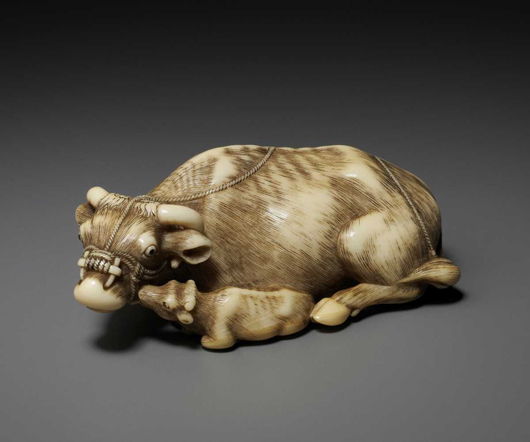 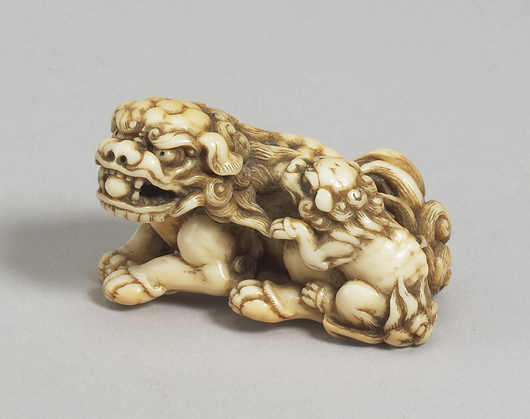 An 18th-century ivory netsuke of a shishi and cub, signed Tomotada, Kyoto, circa 1760-80, 2 inches long, will be on the stand of London dealer Sydney L. Moss at the Russian, Eastern & Oriental Fine Art Fair. Image courtesy Sydney L. Moss.

One notable exception upwards of that price bracket is the superb 18th-century ivory netsuke of a boar by Masanao of Kyoto, which Rutherston has priced at £80,000 (around $115,400). 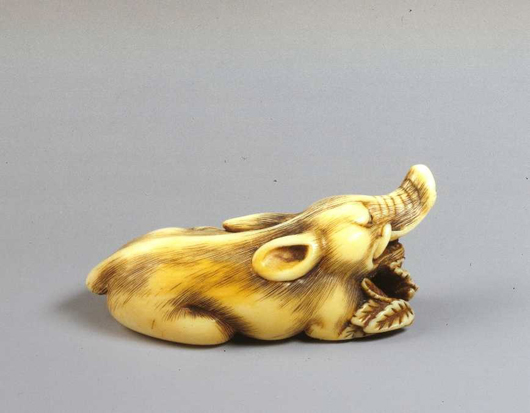 Twenty years ago, a cloud of volcanic ash might have done a lot more damage to the art and antiques trade than it is doing today. Now, of course, we have the Internet. But let’s not forget the trusty old telephones, which remain a stalwart part of saleroom technology, as was demonstrated recently at the Salisbury salerooms of Woolley & Wallis. Their early May silver and jewellery sale was notable for two items in particular.

The first of these was an elaborate George IV silver-gilt presentation vase and stand, made by the celebrated silversmith Philip Rundell for Sir Henry Russell in honor of his work with the Indian army. Despite having lost its cover, this beat beat an estimate of £30,000-£40,000 when a telephone bidder offered £95,000 ($137,200). 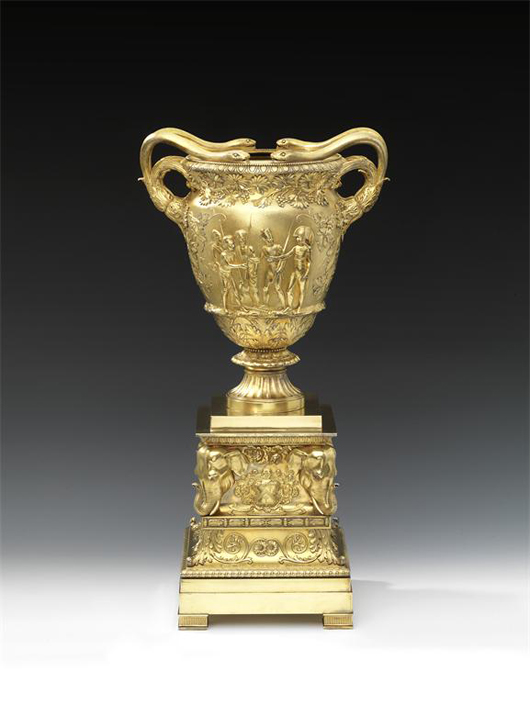 This George IV silver-gilt presentation vase and stand by Philip Rundell fetched a hammer price of £95,000 ($137,200) at Woolley & Wallis in Salisbury, despite having lost its cover. Image courtesy Woolley & Wallis.

The second item was a superb Lalique diamond and plique à jour enamel pansy collar pendant (Fig. 7), the fifth important piece of Lalique jewelry offered by Woolley & Wallis in recent seasons. At first, the Salisbury firm were concerned that their jewelry expert Jonathan Edwards might not make it to the sale, having been stranded in the Far East due to the volcanic ash cloud. Happily, however, he managed to make it back just in time to see the pendant sell for a hammer price of £40,000 ($57,750), demonstrating that solid prices can generate healthy business for provincial firms as other sellers step forward. 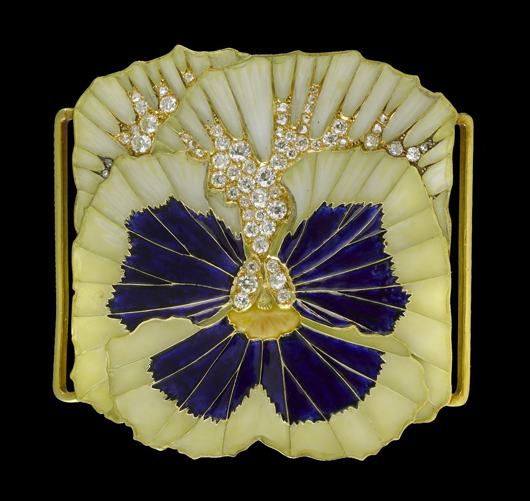 Staying on the silver theme, the Sir John Soane Museum is joining forces in June with specialist silver dealers Koopman Rare Art to stage The Classical Ideal: English Silver 1760-1840, an exhibition that will include loans from the Royal Collection, the National Trust, Lloyds of London and other museums and private collections. 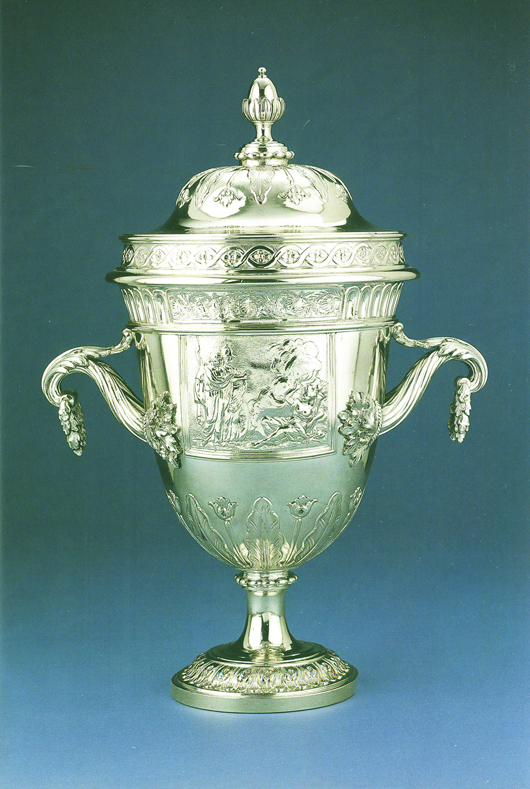 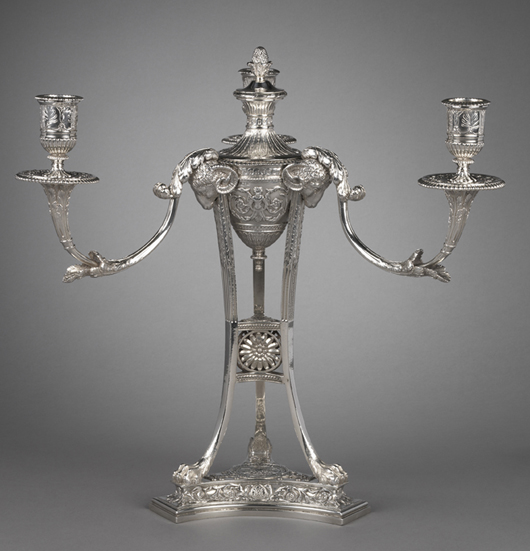 A three-light candelabrum, 1774-75, by John Carter, designed by Robert Adam, loaned by Lloyd’s of London to the exhibition ‘The Classical Ideal: English Silver 1760-1840’ at Koopman Rare Art in London from June 3-25. Image courtesy Lloyds of London and Koopman Rare Art. 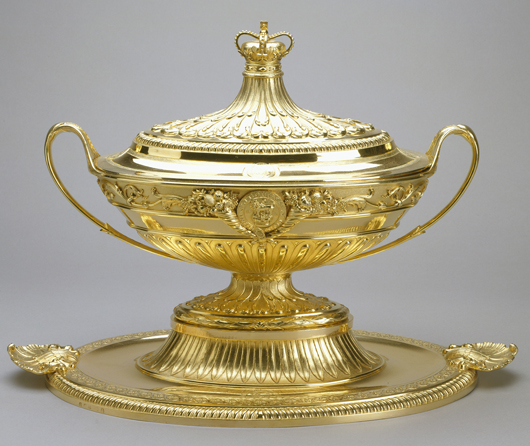 The main exhibition takes place at Koopman’s premises at 53-64 Chancery Lane, London, June 3-25, and there will also be a publication to coincide with the exhibition written by curator Christopher Hartop, as well as a conference on neo-classical metalwork on June 19 at the Royal College of Surgeons in Lincoln’s Inn Fields.

The Sir John Soane Museum is, of course, the ideal museum to partner with Koopman on this project, being the spiritual home of 18th-century neoclassical taste in London. Not only is the museum a shrine to Soane’s antiquarian interests and one of London’s most intriguing and deeply atmospheric museums, it is also the repository of a world-class collection of 9,000 drawings from the office of the great neoclassical architects and designers Robert and James Adam, some of which will be loaned to the exhibition.

Finally, some good news for lovers of Baroque painting. A fine work by the great 17th-century Baroque artist Domenichino entitled Saint John the Evangelist, dating from the 1620s, has been saved for the nation. The painting had been sold to an oversea buyer for just over £9 million ($13 million) at an auction in December, but the Reviewing Committee on the Export of Works of Art and Objects of Cultural Interest placed an export licence deferral on the painting, owing to its outstanding aesthetic importance. Happily, a new collector came forward to acquire the painting and thereby keep it in the UK. It will be on display in the National Gallery’s Baroque rooms for 18 months. 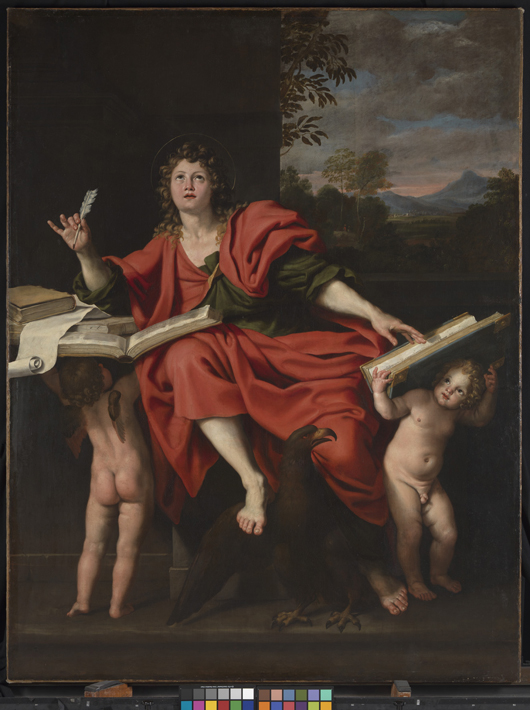 Considered one of the greatest works by the Italian Baroque master Domenichino (1581–1641), this painting of St. John the Evangelist has been saved for the nation and will go on public display at the National Gallery, having been acquired by an anonymous private collector.

National Gallery Curator Dawson Carr said, “It is undoubtedly the best work by the artist remaining in private hands and its export would have been lamentable for the representation of Italian Baroque painting in this country.”