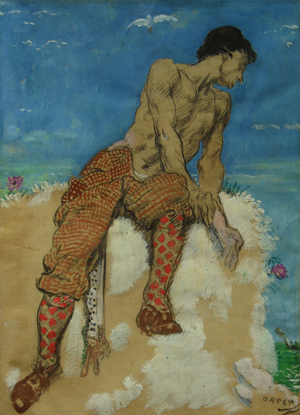 Sir William Orpen’s ‘Self-Portrait on a cliff top in Howth,’ charcoal with gouache and oil on buff colored paper, on exhibition with Jean-Luc Baroni during the Master Drawings London event from June 27 to July 5. Image courtesy Jean-Luc Baroni.

LONDON – You may need to be of a certain age for the name Supertramp to ring any bells. Even if the name strikes a chord, it is surely only die-hard Supertramp fans who will be aware that Dave Winthrop (born 1948), a member of that hugely successful rock band in the early 1970s, is also an accomplished artist. Like many rock musicians of that era, Winthrop combined his musical career with forays into art school. Although his art training at Colchester School of Art never proved quite as thrilling as gigging with the likes of Supertramp and the now largely forgotten Chicken Shack, Winthrop never stopped drawing. The notebooks and sketchpads he kept while touring with the likes of Dr. John, The Eurythmics and other bands, reveal him as a highly skilled draftsman. 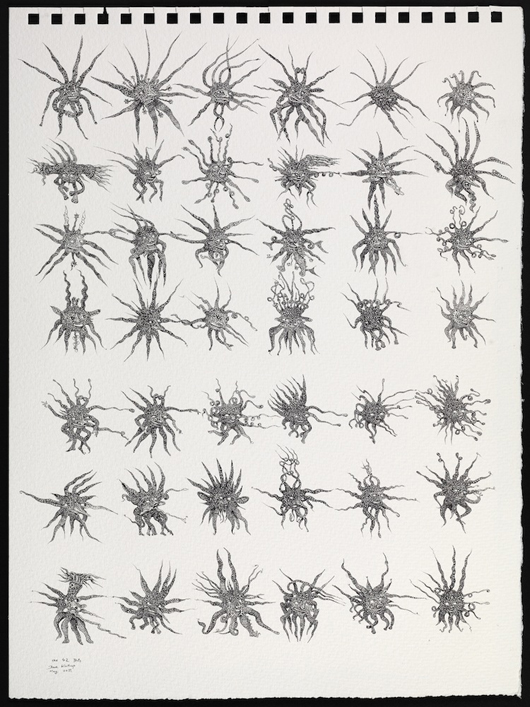 This Rotring pen drawing, entitled ‘The 42 blots,’ by David Winthrop (born 1948), a former member of rock band Supertramp and also an accomplished draftsman, will be on display at Day and Faber’s gallery in Old Bond Street during the Master Drawings London event. Image courtesy Day & Faber. 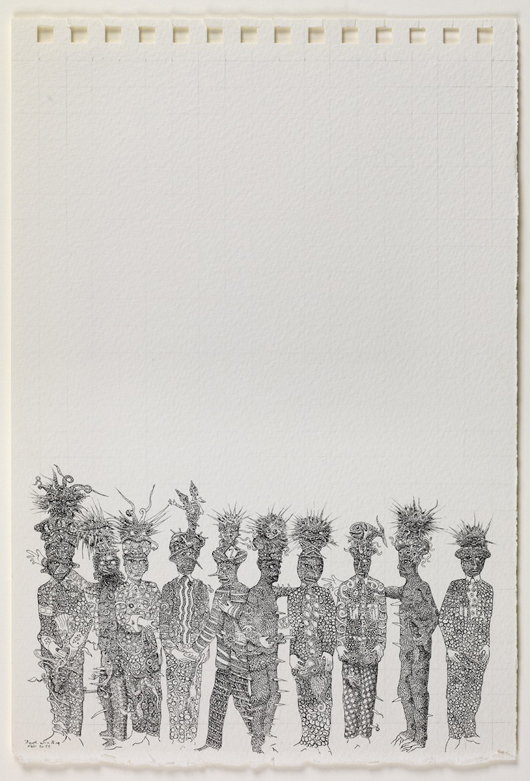 Today, when not blowing a saxophone, he continues to make art from his studio in Ramsgate, Kent.

Winthrop’s meticulously dense, highly idiosyncratic drawings and designs will form one of the more unusual attractions of the 12th edition of Master Drawings London—the capital-wide event in which specialist drawings dealers from around the world show a broad range of works from the Renaissance to the present at galleries throughout Mayfair and St. James. Winthrop’s work will be on display at Day & Faber’s gallery at 14 Old Bond St. for the duration of the drawings festival from June 27 to July 5.

Meanwhile, rather more typical of the sort of thing for which Master Drawings London has become known over the years, is British modernist painter William Orpen’s vigorous Self Portrait seated on a cliff top, 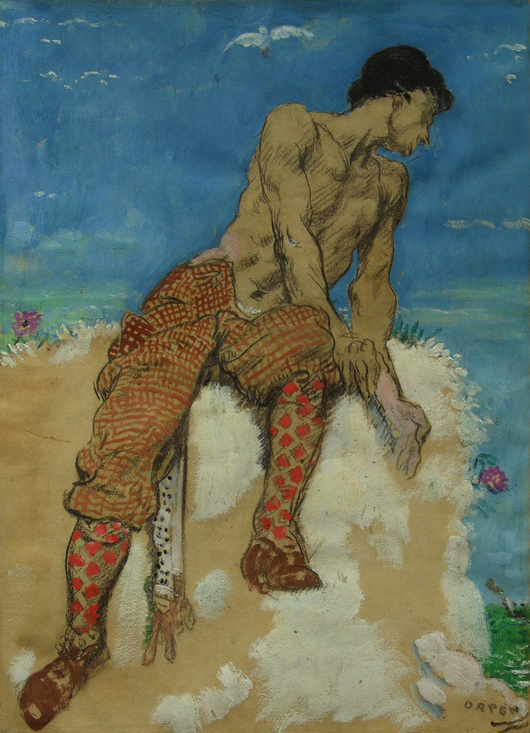 Sir William Orpen’s ‘Self-Portrait on a cliff top in Howth,’ charcoal with gouache and oil on buff colored paper, on exhibition with Jean-Luc Baroni during the Master Drawings London event from June 27 to July 5. Image courtesy Jean-Luc Baroni.

on display with Jean-Luc Baroni in Mason’s Yard, St. James, and Salvator Rosa’s A Standing Halberdier in pen and brown ink and brown wash, which will be offered by Stephen Ongpin, also based in Mason’s Yard. 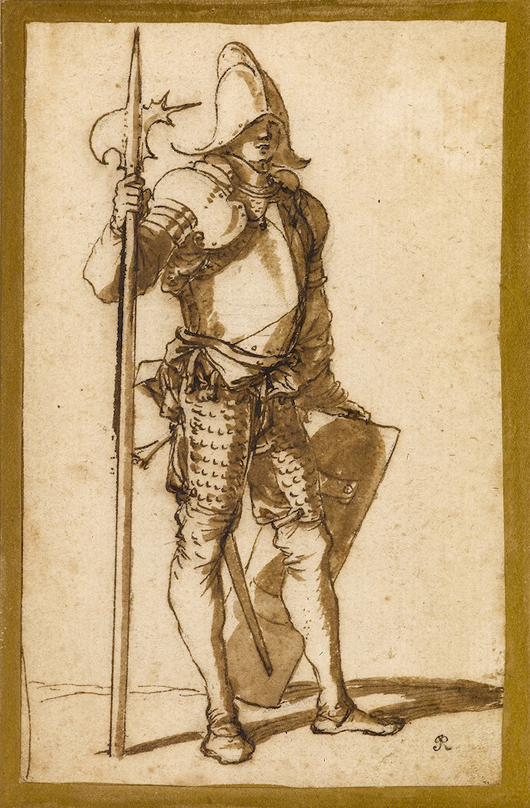 Salvator Rosa (1615-1673), ‘A Standing Halberdier,’ pen and brown ink and brown wash, over a black chalk underdrawing, laid down on an 18th century (Richardson) mount. On show during Master Drawings London at the St. James gallery of Stephen Onpin. Image courtesy Stephen Ongpin.

Master Drawings London is nothing if not varied.

It is a truism frequently repeated these days that the art market is now largely “event-driven,” which is another way of saying that fairs have become the motor powering a good deal of international art commerce. London in June veritably explodes with art and antiques fairs and this year the more important ones will be hoping to benefit from the “Olympic bounce” of the London 2012 Games.

If a group of dynamic London dealers had not moved swiftly to fill the vacuum, London would still be mourning the demise of the Grosvenor House Art & Antiques Fair of fond memory, which folded in 2009 after 75 glorious years. In the event, the Masterpiece fair, now in its third year, not only filled the gap left by the Grosvenor, but delivered an even more spectacular international display that confirms the rude health of the luxury, blue-chip end of the art market. This year’s Masterpiece provides further evidence, if any were needed, of the ever-widening gap between ultrahigh net worth individuals, those with investable assets of more than $30 million, and everyone else.

As if to drive that point home, this year’s fair, located in a purpose-built pavilion in the grounds of the Royal Hospital, Chelsea from June 28 to July 4, includes a print of one of the most expensive paintings ever sold — Edvard Munch’s The Scream. 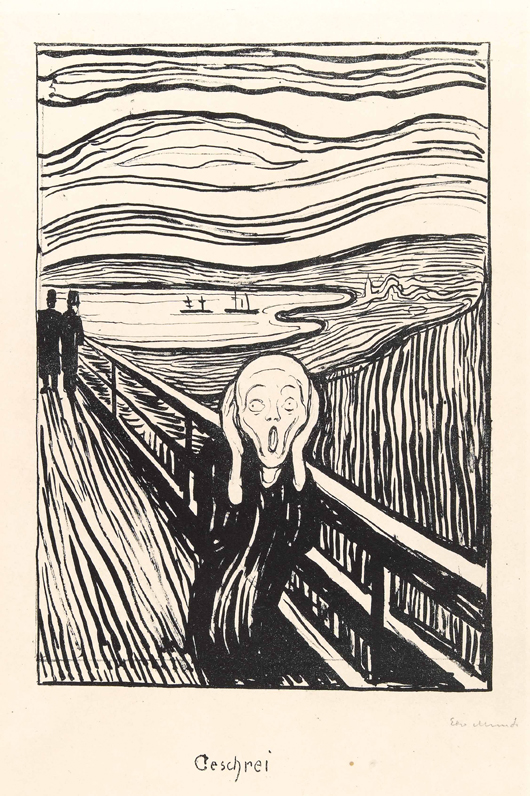 This extremely rare lithograph from 1895 will be on the stand of Oslo-based dealer Kaare Berntsen whose entire Masterpiece display will be devoted to Munch’s work. Original Scream prints of this kind have only been offered at auction twice in the last 20 to 30 years. The Munch Museum in Oslo inform us that this impression is one of only 26 such prints and one of very few which includes both the artist’s signature and an inscribed poem. Those features have contributed to its price tag of “approximately £2 million” ($3.1 million).

It is futile to even attempt to summarize the extraordinary panoply of treasures on display at Masterpiece, but typical of the quality on offer is the only known example of an oversize Cary “terraqueous” globe 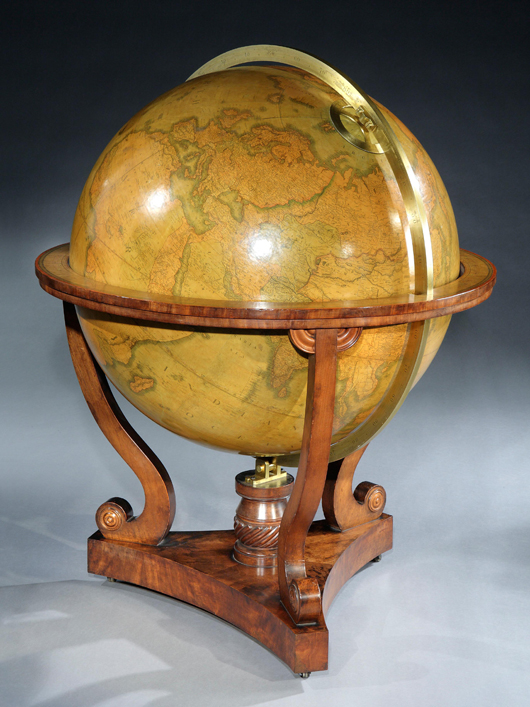 that maps the 1839 expedition in the Great Northwestern Passage—complete with rediscovered documents, maps and photographs. This will be offered by Butchoff Antiques, while Whitfield Fine Art will show a newly discovered and fully authenticated Caravaggio, shown for the first time in the UK since its recent rediscovery. 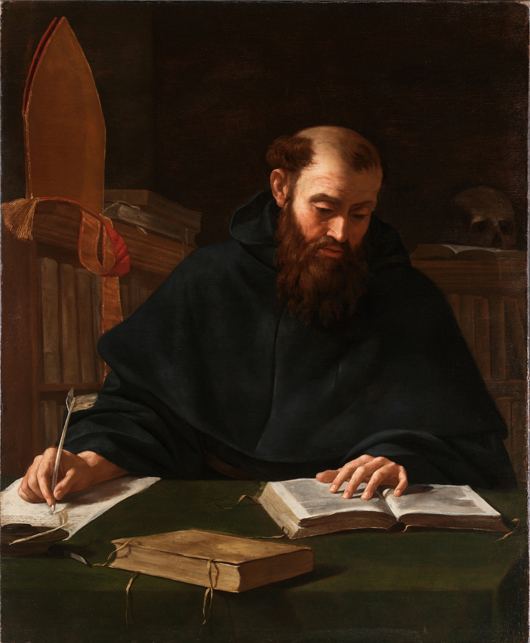 Painted around 1600 for Cardinal Benedetto Giustiniani, this masterful portrait of Saint Augustine uses the same model who featured as one of the apostles in the National Gallery’s Supper at Emmaus, one of many works that Clovis Whitfield brilliantly analyses in his recently published scholarly book on the artist, Caravaggio’s Eye (Holberton, London 2011).

The increasingly global, multicultural nature of the art market has become one of its most notable features in recent years. London may have slipped from its once seemingly unassailable position as one of the top two international art market hubs (alongside New York) both of which have now been overtaken by China. It remains, however, a vibrant and incredibly multicultural center of art commerce as the next month will demonstrate. This week, Russia’s wealthy will once again be in force to contest the sales of Russian art offered by Christie’s, Sotheby’s and MacDougall’s and doubtless many will remain to peruse the plethora of fairs that follow soon after. Meanwhile, Islamic and Middle Eastern art are also powering their way up the league tables as Qatar and other Gulf states stake their claim to cultural supremacy.

That crosscultural theme is revealed in a new work commissioned specifically for another important London art fair happening this month — Art Antiques London — taking place for the third year in a specially built pavilion opposite the Royal Albert Hall in Hyde Park from June 13-20. New York gallerist Jane Kahan has commissioned the Islamic artist Ahmed Moustafa to create a new Aubusson tapestry titled Frolicking Horses, which will be priced “in the mid-six figures” at the fair. 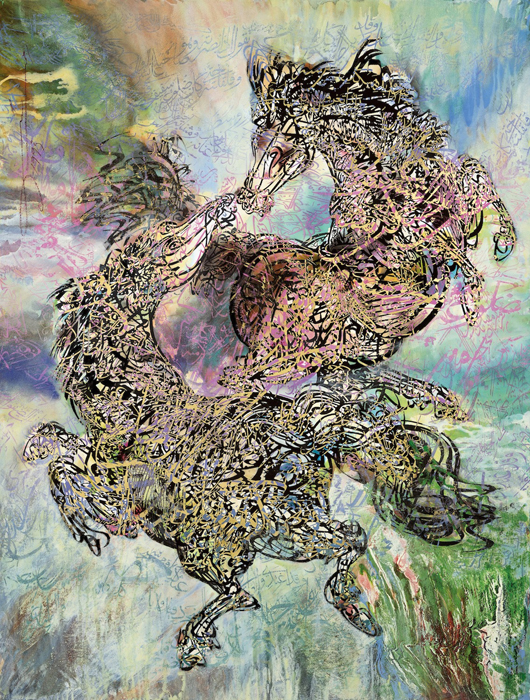 ‘Frolicking Horses,’ a painting by Egyptian artist Ahmed Moustafa, from which an Aubusson tapestry will be woven. The finished work, commissioned by New York gallerist Jane Kahan, will be shown at the forthcoming Art Antiques London fair in Hyde Park from June 13-20. Image courtesy Jane Kahan and Art Antiques London.

A coming together of an American-based dealer, an Egyptian artist, and a French tapestry company at a London fair — it’s hard to imagine a more eloquent expression of the hybrid nature of today’s contemporary art market.

Another interesting trans-Atlantic connection appears in an auction scheduled to take place in Edinburgh, Scotland in September. The ambitious Edinburgh forms of auctioneers, Lyon & Turnbull, have won the prestigious instructions to disperse the contents of the Greenwich Village, N.Y., home of Donald and Eleanor Taffner. 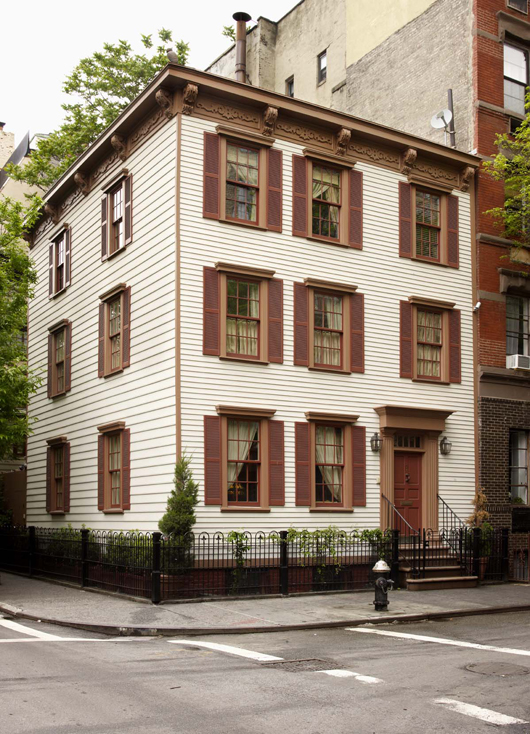 The Greenwich Village home of Donald and Eleanor Taffner, the contents of which will be offered by Lyon & Turnbull in Edinburgh in September. Image courtesy of Lyon & Turnbull.

Mr. and Mrs. Taffner were independent television producers responsible for bringing successful television shows to the American public, including Three’s Company, Too Close for Comfort and The Benny Hill Show. They were also responsible for classic British productions such as My Family and As Time Goes By.

However, it is the Taffners’ love of Caledonian art and culture, and most specifically the work of the Glasgow School of artists and designers, led by Charles Rennie Mackintosh, that makes the forthcoming auction so fascinating. Being such passionate collectors of Glasgow art and design and of the paintings of the Scottish Colourists, the Taffner’s New York home turned out to brimful of works that will be keenly contested in September. 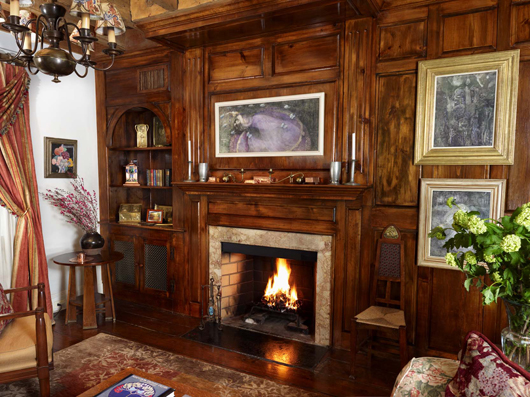 The drawing room at the Greenwich Village home of Donald and Eleanor Taffner showing Glasgow School works, which will be dispersed by Lyon & Turnbull in Edinburgh in September. Image courtesy of Lyon & Turnbull.

It is some time since such an important collection of Glaswegian Art Nouveau came to market. Highlights include a watercolor landscape executed in France by Charles Rennie Mackintosh titled Boultenère, 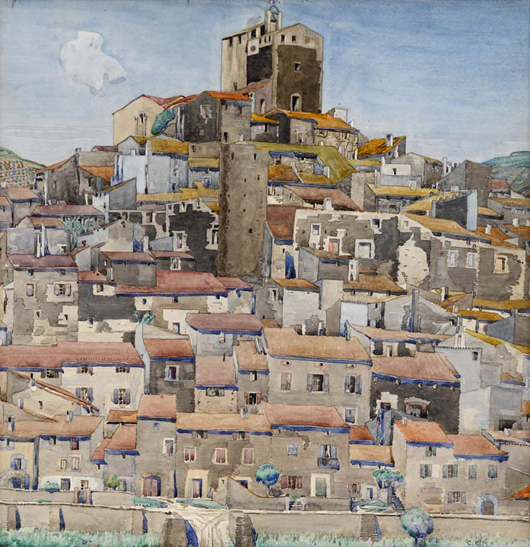 ‘Boultenère,’ a watercolor of 1925-27 by the Glasgow School artist and designer Charles Rennie Mackintosh, which is expected to be a highlight of Lyon & Turnbull’s sale of the collection of Donald and Eleanor Taffner in Edinburgh in September, where it is estimated at £80,000-120,000 ($127,000-$190,000). Image courtesy of Lyon & Turnbull. 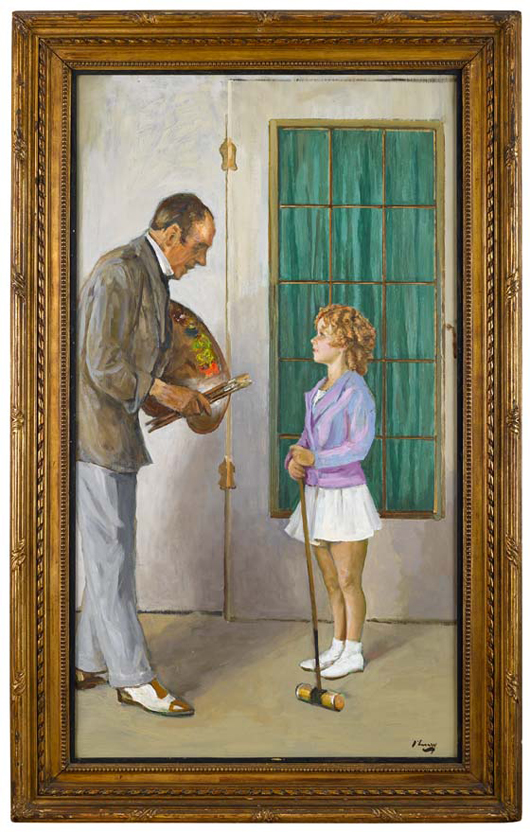 This self-portrait by Sir John Lavery, showing him with the child star Shirley Temple, is estimated at £30,000-50,000 ($47,000-$79,500) when Lyon & Turnbull disperse the collection of Donald and Eleanor Taffner in September. Image courtesy Lyon & Turnbull.