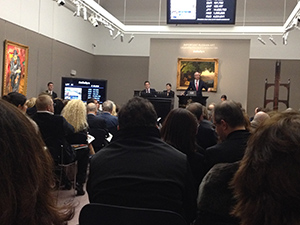 LONDON – Back in the dot-com boom period of 2000-2003, the staid and conservative world of fine art auctioneering looked with something of a jaundiced eye on the new-fangled Internet and the so-called World Wide Web. Few indeed were those who recognized the potential of new technology to radically alter the commercial landscape of the traditional art market. While most auctioneers battened down the hatches and hoped it would all go away, a few plucky individuals took a risk, jumped ship from their secure posts in the world of bricks and mortar and joined one of the new Internet start-ups. Sadly, few of those early pioneering businesses survived the subsequent financial meltdown, but by effectively taking one for the team they thus paved the way for the world we now inhabit in which Internet bidding is playing an increasingly prominent role.

Mark Poltimore, current chairman of Sotheby’s Russia, was one of the brave souls who a dozen years ago packed his gavel and set off for the sunlit uplands of Internet auctioneering. In doing so he gained perhaps a deeper insight into Internet auction technology than less adventurous colleagues in the art market. That experience may have been in the back of his mind as he mounted the rostrum at Sotheby’s in London on Monday evening to conduct a sale of Russian art.

Halfway through the evening, he brought the hammer down on Lot 19 – a painting of a seated nude by Nikolai Fechin (1881-1955) – one of a number of lots that had been deaccessioned by the Palm Springs Art Museum. 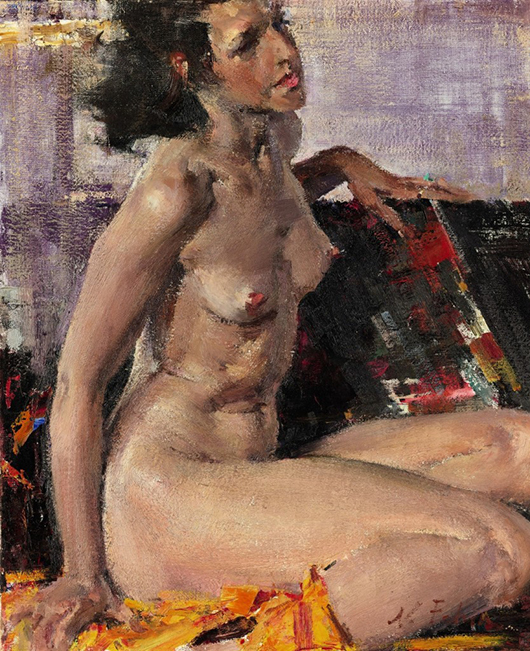 “That was one of the largest internet bids I’ve ever taken,” pronounced Lord Poltimore from the rostrum. The significance of those throwaway words in the context of his earlier experience with the now long-defunct E-Hammer.com would have been lost on a saleroom packed with members of the Russian nouveau riche.

Fechin’s Nude was a welcome highpoint in a sale that had been deprived of much of its promised blue-chip action by the fact that the two star lots had been sold by private treaty prior to the auction. Petr Petrovich Konchalovsky’s enormous Family Portrait in the Artist’s Studio, and Robert Rafaelovich Falk’s Man in a Bowler Hat (Portrait of Yakov Kagan-Shabshai), both dated from 1917 and were prominently hung in the center of the salesroom. 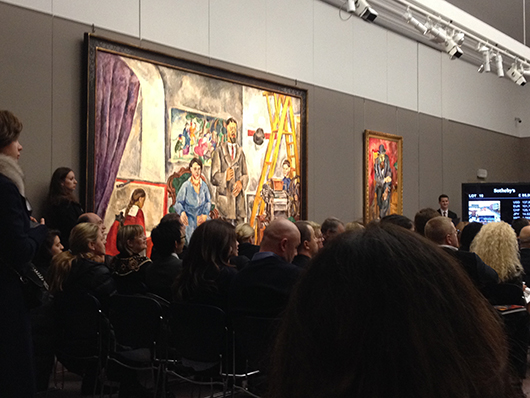 Petr Petrovich Konchalovsky’s monumental ‘Family Portrait in the Artist’s Studio,’ and Robert Rafaelovich Falk’s ‘Man in a Bowler Hat (Portrait of Yakov Kagan-Shabshai),’ hanging at Sotheby’s on Monday Nov. 25. Both lots were sold by private treaty prior to the auction. Image Auction Central News.

Drawing heavily on the prevailing painterly language of postimpressionism, both works reportedly sold to London-based Russian billionaire oligarch Pyotr Aven, chairman of the Alfa Banking Group. Sotheby’s declined to confirm the prices, but Russian trade sources at the sale told Auction Central News that the prices were £4.75 million ($7,775,000) for Family Portrait and £6.1 million ($10 million) for Man in a Bowler Hat. 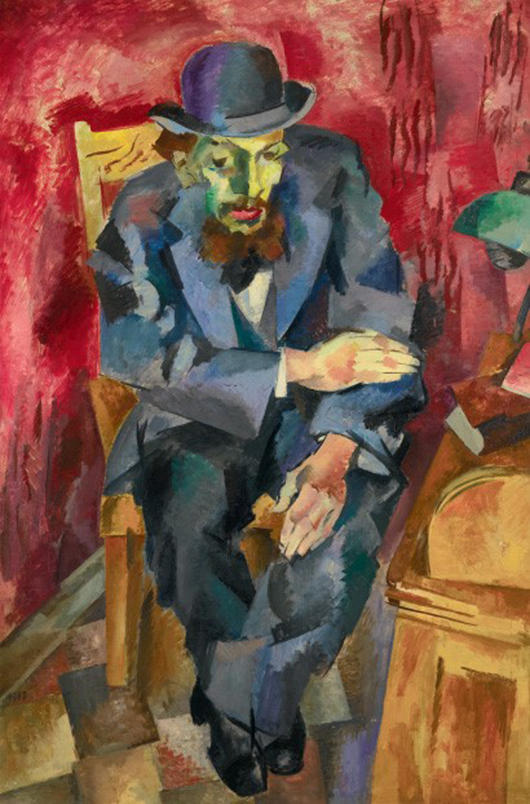 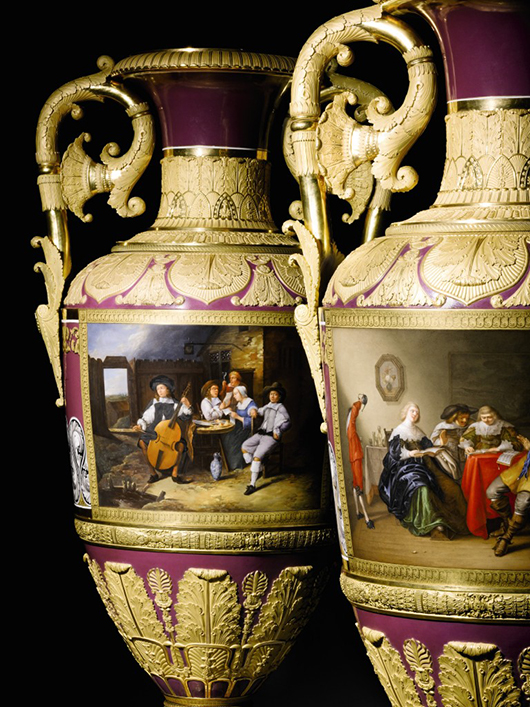 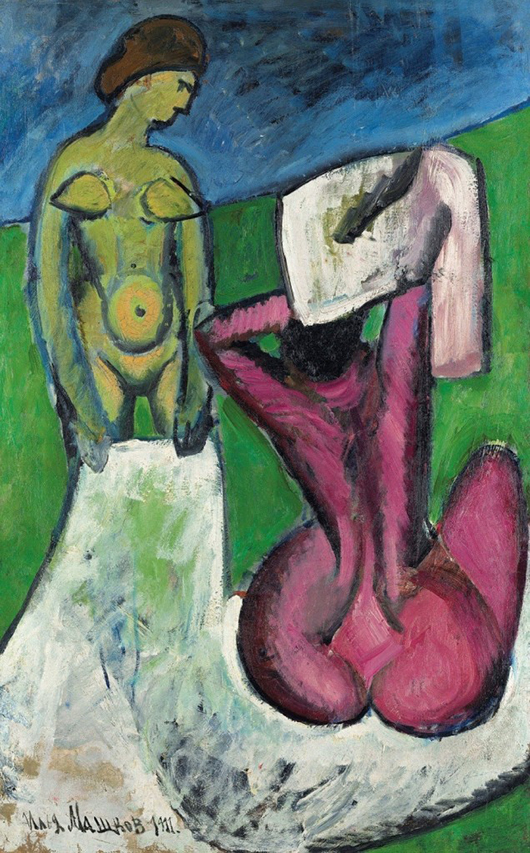 There are said to be around 500,000 Russians domicile in London — hence the capital’s new sobriquet “Moscow-on-Thames.” Certainly the high-spending Russian and Eastern European contingent were in evidence for the Russian sales. If the London auction sales confirmed their taste for art, we know rather less of their taste in music, but it is a fair bet that the majority of them would be familiar with the output of one Robert Zimmerman, known to most of the world as Bob Dylan. One had only to wander across the street from Sotheby’s to the Halcyon Gallery to witness Dylan’s most recent project and it had nothing to do with music. 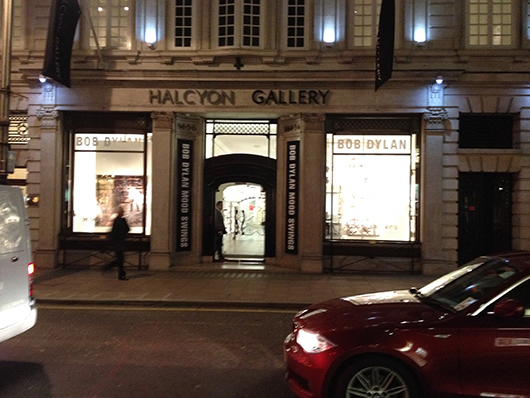 “Mood Swings” is a huge exhibition devoted to Dylan’s sculpture in iron and steel. The recently opened Halcyon Gallery is a vast building but Dylan seems to have had no trouble filling its many rooms with his elaborate screens and wall panels composed of welded chains, bolts, springs and clamps. 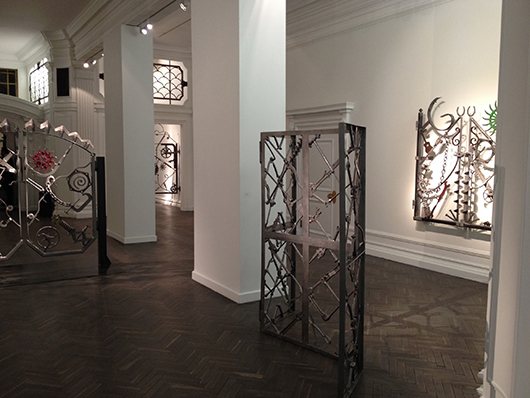 “I’ve been around iron all my life ever since I was a kid,” says Dylan in a wall panel in the exhibition. “I was born and raised in iron ore country where you breathe it and smell it every day. And I’ve always worked with it one way or another.” His sculptural activities may come as a surprise to the legions of fans who have listened to Bob’s music through the decades, many of whom will now be wondering how he ever found time in his busy writing, recording and touring schedule to brandish a welding torch (Monday write, Tuesday weld?).

Dylan’s sculpture is a derivative take on the work of the modernist sculptor David Smith, and lacks the visual poetry and sense of composition that established Smith’s reputation as a great American master. Unlike Smith’s muscular constructions made from discarded engineering components, these Halcyon works seem to have been made from preordered parts that have the shiny, box-fresh quality of off-the-peg interior design. 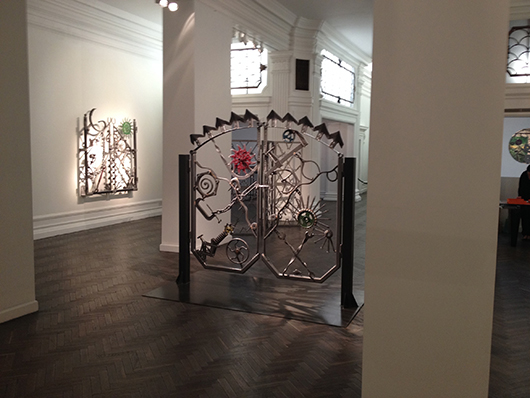 Dylan’s sculptures may have been inspired by visual artists of far greater renown but at least he is not being accused of plagiarism. Damien Hirst, on the other hand, is once again in the news for allegedly drawing a little too much on the work of another artist. Hirst’s recent photo shoot for GQ magazine features pop diva Rihanna as Medusa crowned with snakes with a python around her neck. Now artist Jim Starr is claiming that the image seems strangely similar to one of his own works which, coincidentally, had appeared in a Dreweatts auction catalog adjacent to one of Hirst’s works. Approached by the London Evening Standard newspaper, Hirst’s dealers, the fashionable White Cube gallery, declined to comment.

Happily no such brouhaha surrounds the work of London-based Anglo-Indian artist Natasha Kumar, whose Indian-inspired paintings, prints and drawings are winning her a broad collecting base around the world. Her recent exhibition at the Royal Geographical Society in Exhibition Road, a mere stone’s throw from the great Asian collections of the Victoria and Albert Museum, has won her even more admirers. 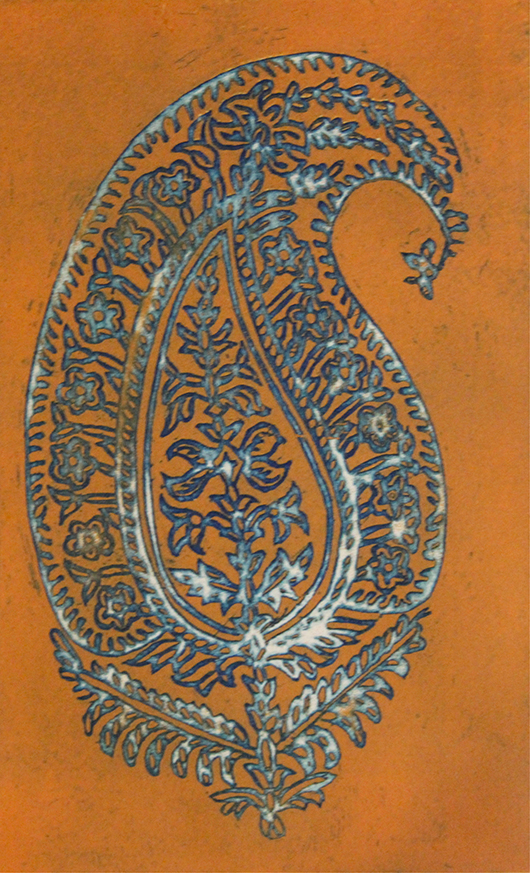 This work by Natasha Kumar was recently on display at the Royal Geographical Society in South Kensington and will be on show at the Asia House Christmas Fair at 63 New Cavendish St. on Dec. 6-8. Image courtesy Natasha Kumar. 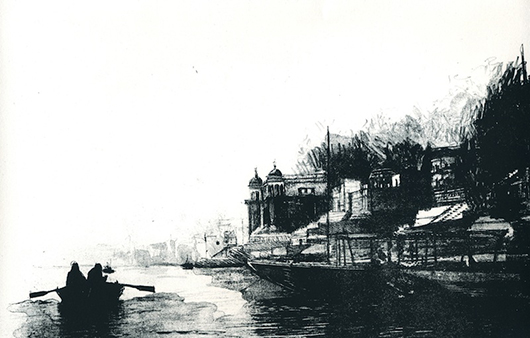 ‘On the Ganges, Sunrise,’ by British artist and printmaker Natasha Kumar, which will be among works on display at the Asia House Christmas Fair at 63 New Cavendish St. on Dec. 6-8. Image courtesy Natasha Kumar.

The exhibition featured paintings and drawings based on her travels in Rajasthan and were complemented by outdoor sculptures in polished stone by British artist Paul Vanstone.

“It is always a real joy to be part of the Royal Geographical Society,” Kumar told Auction Central News. “This is our second Kumar and Vanstone exhibition in the Pavilion Gallery. The glorious building has surprising spaces with wonderful lawned gardens that back onto the Royal Albert Hall. Paul’s large torso works and his heads in pure black and pure white marble look amazing here.” 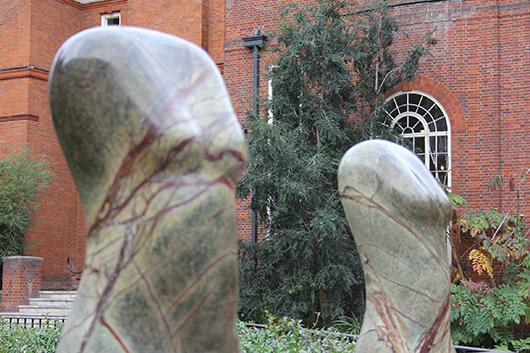 Kumar’s works will be on show at the Asia House Christmas Fair at 63 New Cavendish Street on Dec. 6-8.

Asian works also featured in the recent Antiques for Everyone Fair at the National Exhibition Centre in Birmingham in early November. One of the fair’s most interesting and successful components was a ‘Young Guns’ section devoted to dealers under 40 years of age.

The Young Guns pavilion at the Antiques for Everyone Fair at the National Exhibition Centre in Birmingham in early November where organizers reported a ‘genuine improvement’ in trading conditions. Image courtesy Antiques For Everyone Fair.

“It’s been a thrill to bring my eclectic stock to such a popular and well-known fair and do such good business,” said George Johnson, who trades as Lady Kentmores, an antiques shop in Callandar, Perthsire. Among the more encouraging sales at the fair was a Llanrwst oak dresser, circa 1730, offered by Melody Antiques of Chester, (Fig. 14) which sold for around £8,000 ($13,000), a Guanyin female figure in wood and gesso, that sold for £800 on the stand of antiquities specialist A.B.Antico, (Fig. 15) and a late 19th century equestrian oil on canvas titled Colonel Arthur Hill with his Favourite Hunter, by Benjamin Cam Norton, dated 1873, sold by Blackbrook Gallery, Leicestershire for £5,950. (Fig. 16) 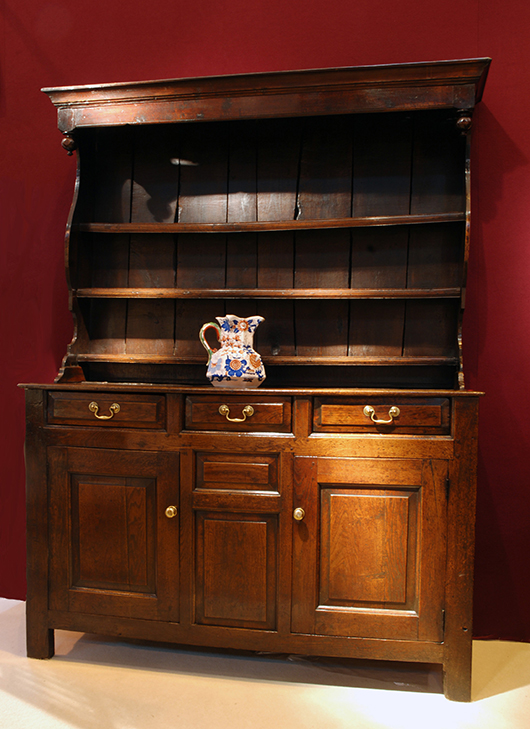 A Guanyin female figure in wood and gesso that sold for £800 on the stand of A.B. Antico at the Antiques for Everyone Fair in November. Image courtesy Antiques For Everyone Fair. 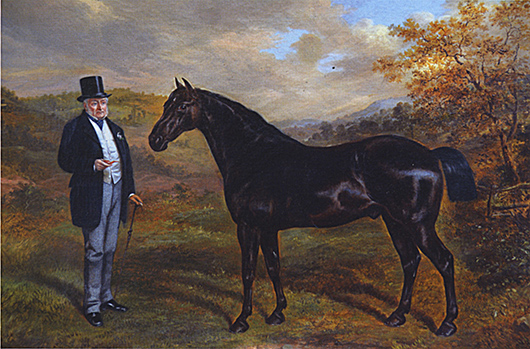 The fair’s organizer, Dan Leyland, said afterwards: “It’s been particularly pleasing to welcome the support of the Young Guns and to see so many of our new and returning dealers report good business. The market genuinely appears to be improving. We’ve welcomed more exhibitors than for some years, and the prospects for 2014 look most promising.”

Given the prominence of Scottish dealers at the fair, one wonders what impact the forthcoming referendum on Scottish independence might have on Caledonian representation at future events of this kind. Only time will tell.