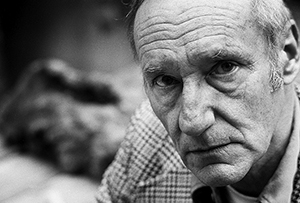 Willam S. Burroughs, who is the subject of the exhibition ‘Can You All Hear Me?’ at October Gallery from Dec. 4 to Feb. 7. Image courtesy of October Gallery. Photo copyright James Grauerholz.

LONDON – There is a distinct American theme to this month’s report from rainy Britain, and we are not referring to the bizarre shopping phenomenon known as Black Friday, which has now crossed the Atlantic, bringing retail mayhem to British high streets as members of the public do pitched battle with over heavily discounted consumer durables.

Happily that style of shopping is yet to reach the art and antiques sector where a certain genteel restraint is still the order of the day. No, instead the American flavor referred to comes from two events this month, one in a London gallery, the other in a Yorkshire auction room.

London’s October Gallery is about to stage an exhibition devoted to the work and influence of William S. Burroughs, one of the leading figures of the 1960s counter-culture. Meanwhile, up in North Yorkshire on Dec. 6, the Leyburn auctioneers Tennants will sell a major collection of mainly British porcelain, furniture and works of art accumulated over the past 80 years from UK galleries and auctions by a long-standing client of the auction house based in Virginia, USA. What is the going rate for an older American flag, I hear you ask. Lot 270 is estimated at £60-100 ($95-$1,560). 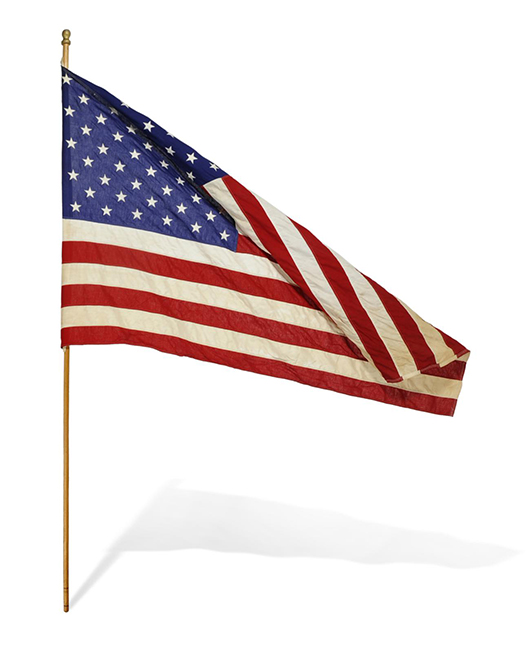 William Burroughs’s association with the October Gallery’s founders dates back to 1974. It was a friendship that led to the gallery staging Burroughs’s first UK exhibition in 1988. Burroughs died in 1997, but his off-center influence can still be felt, as the October show seeks to demonstrate.

Internationally renowned as the spiritual home of the Transvangarde, October Gallery promotes innovative creative projects by established and emerging artists from around the world. Located just a stone’s throw from the British Museum, it continues to provide a meeting place for discussion, experimentation and cross-cultural collaboration for artists, musicians, poets and performers and is thus the most appropriate place for “Can You All Hear me?” the current show of Burroughs’s work. The exhibition, which runs from Dec. 4 until Feb. 7, will include a number of Burroughs’ own abstract works and “talismanic objects” in a range of media. 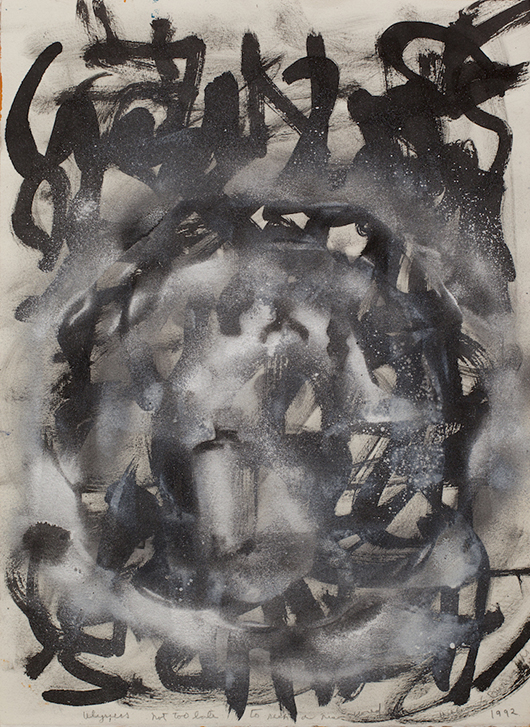 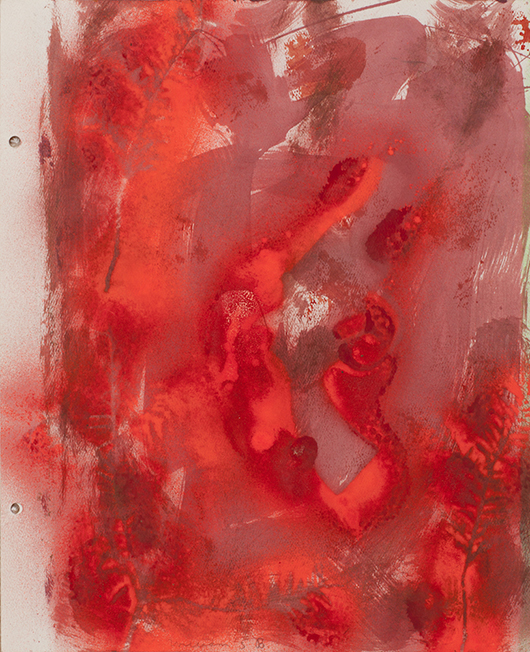 Burroughs had an important influence on many of his contemporaries in Britain and beyond and the exhibition will communicate something of his impact on London-based and international avant-garde artists, poets and musicians such as Lilian Lijn, Genesis Breyer P. Orridge, Shezad Dawood, Cerith Wyn Evans and Brion Gysin. Gysin’s “cut-up” technique was in turn to exert a major impact on Burroughs. The October exhibition is sure to keep the Burroughs flame burning. 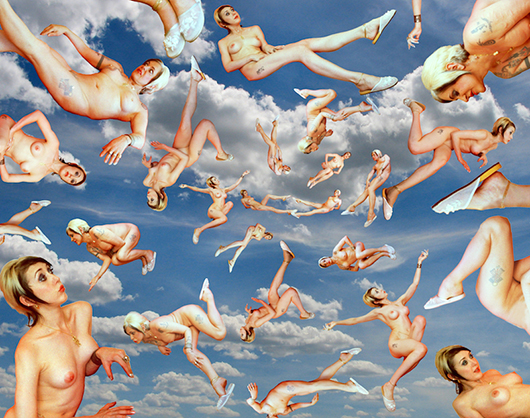 Genesis Breyer P-Orridge, ‘Snoflakes DNA (Clouds)’ 2008. C-Print mounted on Plexiglass. Featured in an exhibition devoted to the work and influence of William S. Burroughs at October Gallery from Dec. 4 to Feb. 7. Image courtesy the artist and October Gallery. 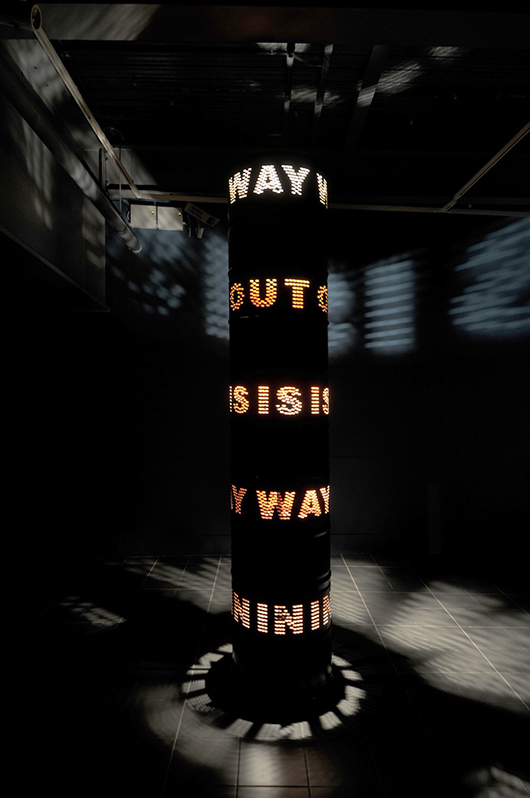 William Burroughs had an influence on many artists, including the British artist Liliane Lijn, whose multimedia work titled ’Way Out Is Way In,’ 2009, is included in the October Gallery’s exhibition devoted to Burroughs. Image courtesy October Gallery and the artist.

Turning to more traditional matters, Yorkshire auctioneers Tennants’ sale on Dec. 6 of the surplus contents and reserve collection of their Virginia client contains some real treasures. In many ways it is the sort of coherent collection that was relatively common under English hammers in the 1970s and early 1980s, but is rarely encountered these days. There is English porcelain aplenty here, including a selection of lovely Worcester cachepots on stands by Flight & Barr and other makers. 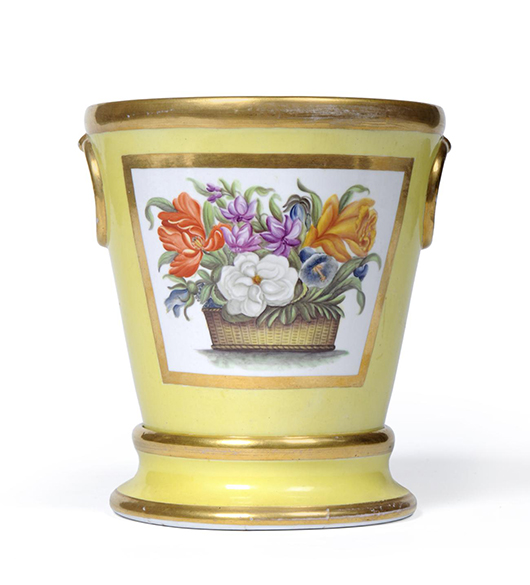 There will no doubt also be huge interest in the sale from Chinese dealers and collectors keen to buy back examples of their own material culture, although my expert industry contacts tell me that Chinese export wares are yet to catch on among Asian buyers. It will therefore be interesting to see who competes for the monogram-decorated Chinese porcelain dinner service, circa 1790, that is forecast to realize between £2,000-£3,000 ($3,125-$4,700). 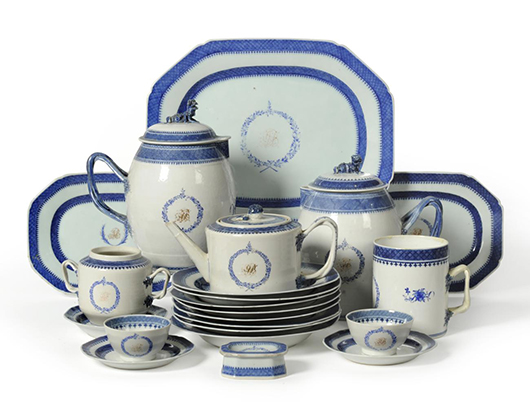 This Chinese porcelain dinner service, decorated with a monogram, is expected to make around £2,000-£3,000 ($3,125-$4,700) when Tennants disperses the estate of a Virginia private collection on Dec. 6. Image courtesy of Tennants.

One of the most interesting items in the sale is a very elegant and simple American Windsor ash and maple stick-back bench settee. 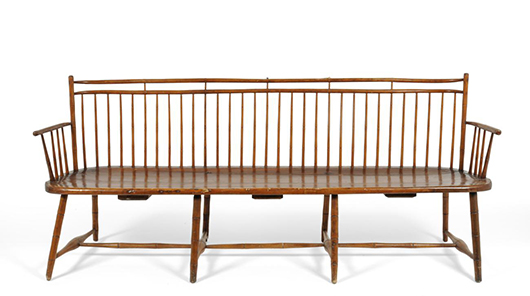 The auctioneers have been careful to hedge their bets somewhat in speculating on the origin of this, suggesting “Philadelphia, Pennsylvania or Rhode Island,” possibly by Joseph Henzey or John B. Ackley. Once again, it will be interesting to see where this ends up, given the combination of its obvious historical interest and its clear interior decorator appeal. It has been estimated at £2,000-£3,000 ($3,125-$4,700) but one suspects its lovely Shaker-like shape and warm color could see it sail over that.

Finally, one of the most potentially expensive items in the sale is a George III silver épergne of pagoda form by Thomas Pitts, London, 1762. 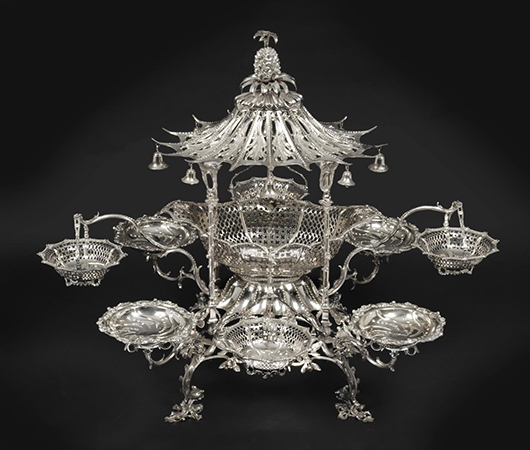 The catalogers clearly had some fun doing justice to the extraordinarily ornate construction of this confection, with its swing handles, pierced baskets and dangling bells, all of which are expected to help steer it to a hammer price in the region of £50,000-£70,000 ($78,225-$109,500).

From small porcelain teacups and saucers to massive, scaled-up porcelain teacups and saucers of the kind that would bring a double-take were you to encounter one of them in a field somewhere in the English countryside. Unless, of course, that field was in a sculpture garden like Broomhill Art Hotel and Sculpture Garden in North Devon. Broomhill’s annual Sculpture Prize has become quite a coveted award for practicing artists making large exterior pieces. Launched, in 2009, the prize has an annual fund of £15,000 ($23,500) offered to new and emerging UK based sculptors. Each year, 10 short-listed artists selected by the judges receive £1,000 each to create a proposal, which is then exhibited at the Broomhill Sculpture Park in the annual summer Exhibition. The winner gets £3,500 ($5,475) and the work goes into Broomhill’s permanent collection. That may not seem like a lot of money, but the award also represents valuable recognition for artists seeking to assert themselves in today’s highly competitive contemporary art world.

The 2014 judges had the usual thorny, but clearly enjoyable, task of weighing up a range of highly imaginative, accomplished and occasionally wacky creations. 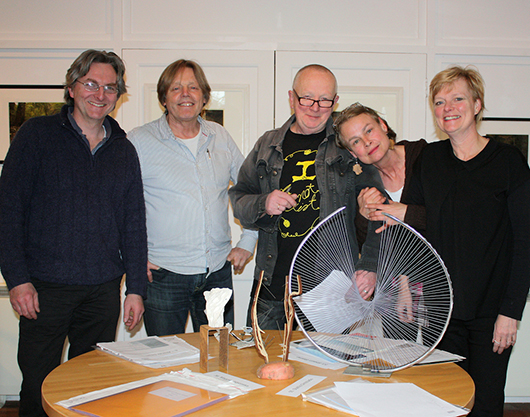 Sculpture is fun. British sculptor Simon Hitchens (left) and fellow judges of the annual Broomhill National Sculpture Prize pause in their deliberations over the 2014 winner of the award. Image courtesy of Broomhill Sculpture Garden.

Their winner this year was Tian Zhu’s Hiccup, an enormous teacup buried in the earth. A graduate of the Royal College of Art, the artist has said of her sculpture, “I would like my work to serve as a ‘hiccup’ – to interrupt and to disturb.” 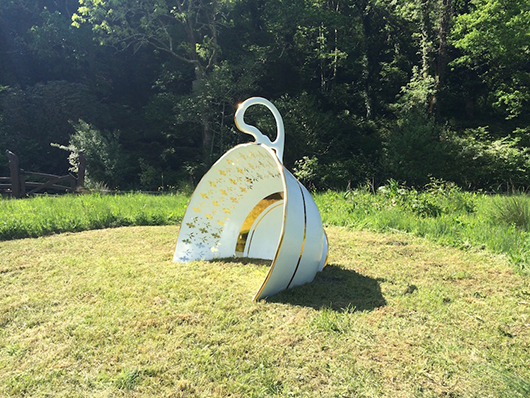 And so finally, to a piece of interesting London art market news. It is now common knowledge that the European sanctions imposed on Russia as a result of the Ukraine conflict and the country’s alleged involvement in the downing of Malaysia Airlines Flight 17 are hitting the country where it hurts most — its economy.

Those geopolitical developments may also be having an indirect impact on the art trade. MacDougall’s, the specialist London-based auctioneers of Russian art, held one of their regular sales of Russian material on Nov 26, selling over £7.7 million ($12 million) worth of art. However, despite some high prices, such as Nicholas Roerich’s And We Continue Fishing, from the “Sancta series,” which made £1,228,500 ($1.9 million) and Ivan Shishkin’s Pine Forest, which fetched £1,215,600 ($1.9 million), the general outlook was cautious. 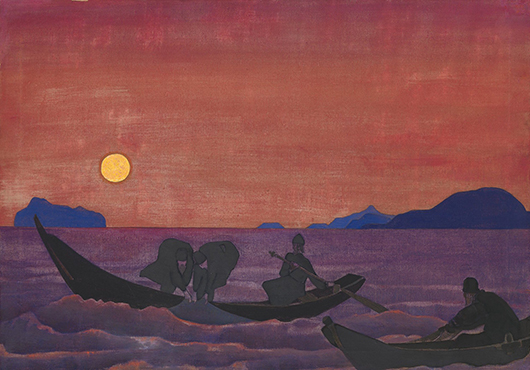 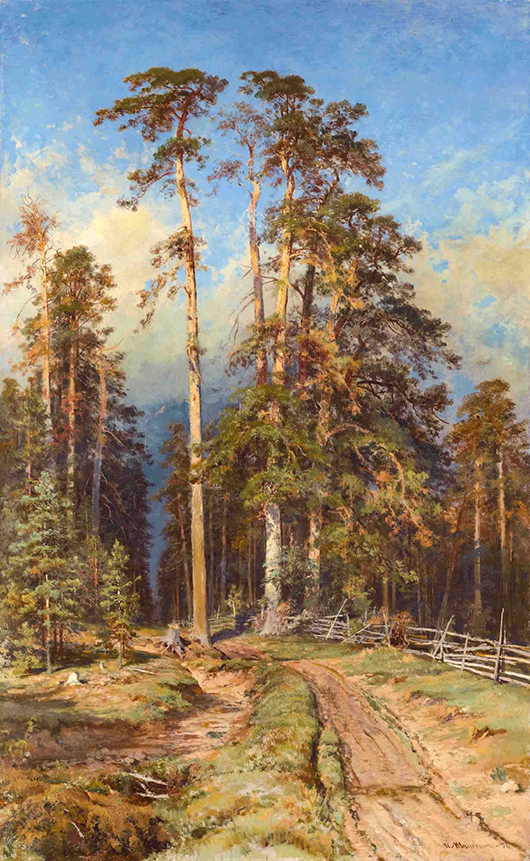 MacDougalls’s founder director Catherine MacDougall said afterwards, “Clients have money but are not in a great mood to buy, given the political and economic situation. Nevertheless, the general trends continue — top lots sell, sometimes exceeding the reserves.”

If there is one thing the art market hates, it’s uncertainty.