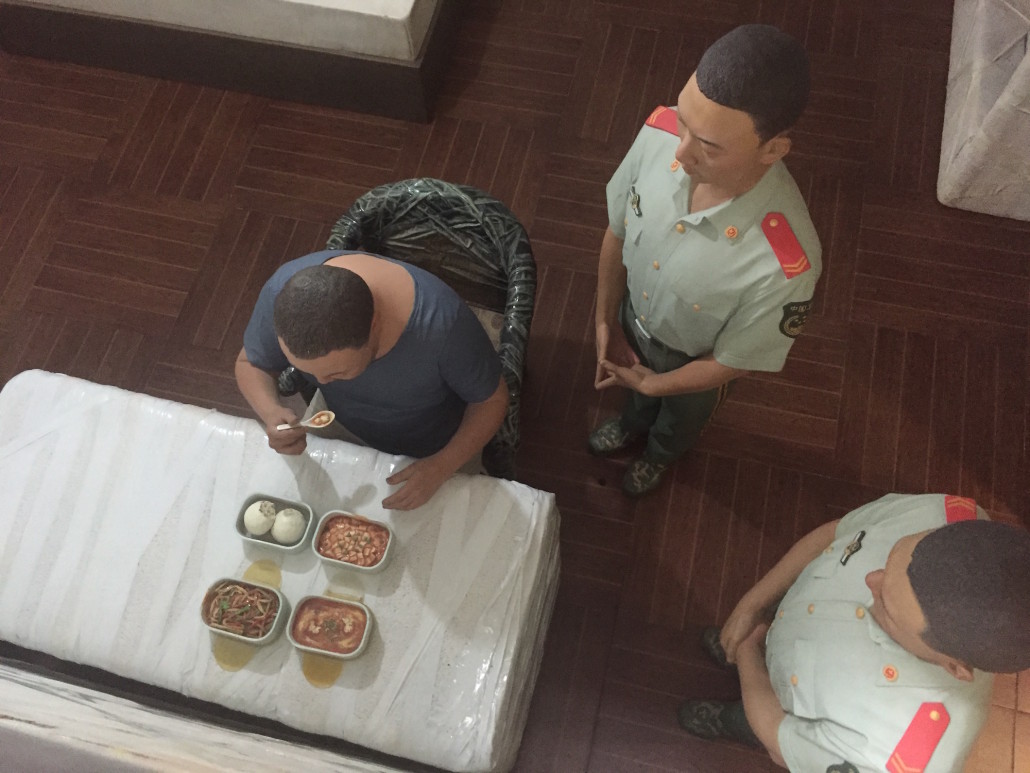 A re-creation of the close-quarter prison confinement of artist Ai Weiwei at the Royal Academy of Arts, which continues until Dec. 13. Image Auction Central News

LONDON — Considering the many successful collaborations between the great modernist painters and sculptors and their counterparts in modernist music it’s a wonder that our museums and galleries don’t do more to bring the two art forms together in the gallery space. Clearly there are logistical difficulties to be overcome, but as London’s Tate Modern recently demonstrated, the results can be intriguing, if occasionally somewhat challenging to the ear.

The mobile sculptures made by the American artist Alexander Calder are now a familiar part of the modernist visual canon, but seldom if ever have his seminal early works been brought together in one exhibition. Thus it is not surprising that the Tate’s current major retrospective of Calder mobiles has been going down a treat with visitors. 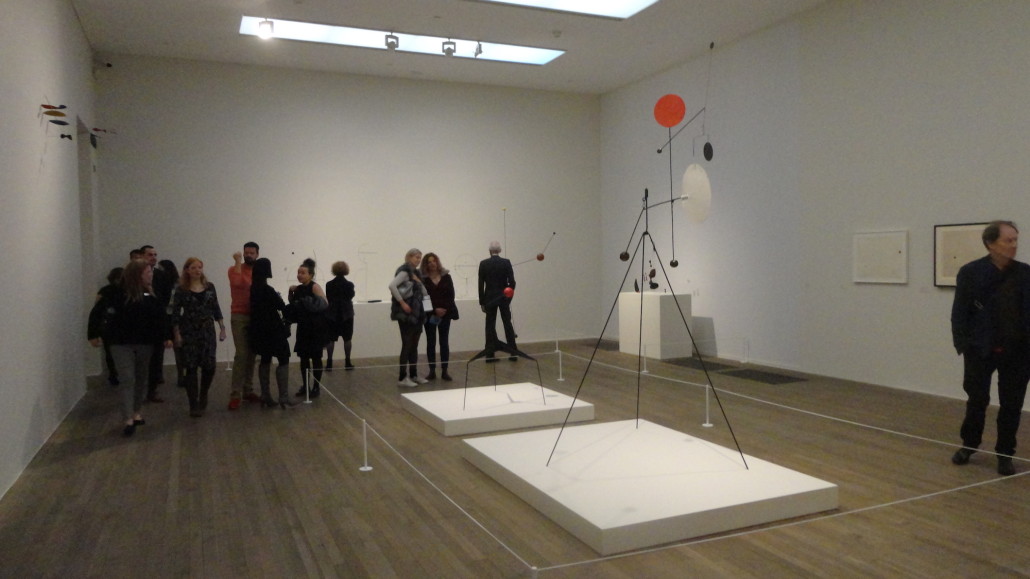 Sadly, however, it was only the great, the good and the glitterati of the London art world (plus a few lucky hangers-on) who were treated to a rare visual-musical performance at the opening of the Tate’s major exhibition of Calder’s mobiles earlier this month. 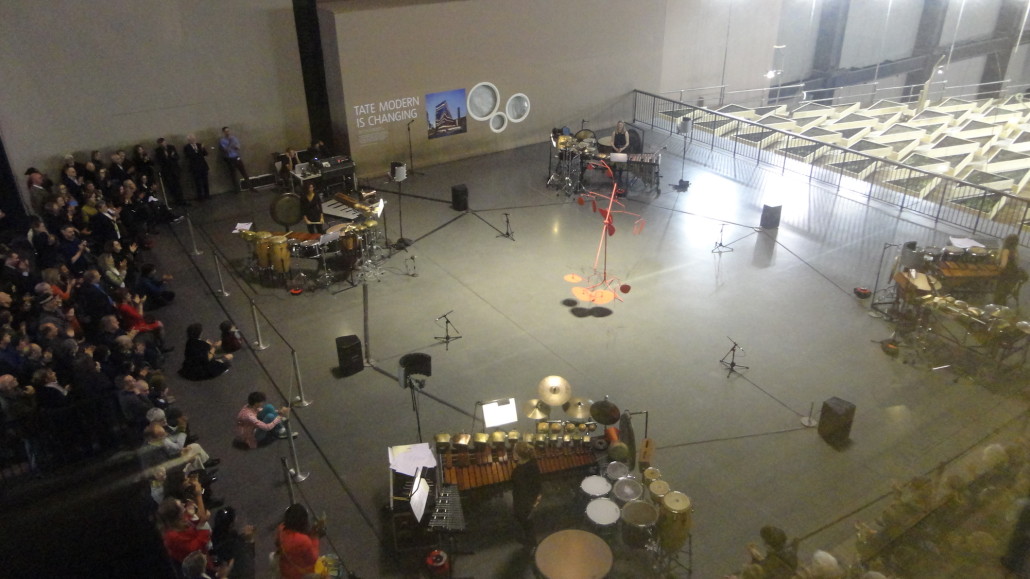 It would have been enough to simply stand and gaze in wide-mouthed wonder at the most extensive survey yet of these exquisite, playful works; but this was an opening night with a difference. Four talented young women percussionists from the Guildhall School of Music were on hand to perform a composition created by Calder in collaboration with modernist composer Earle Brown that drew not only on a vast array of tuned instruments, but also the services of a floor-standing, red-painted revolving Calder mobile from which the musicians occasionally coaxed a range of sonorous chimes. 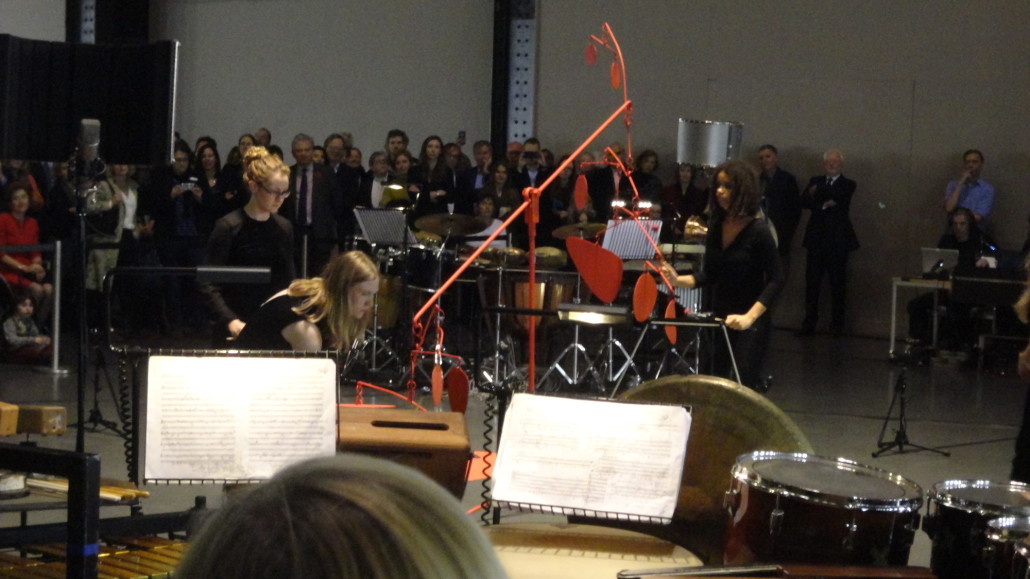 This was contemporary art its most ambient and cerebral, but like a lot of the more thoughtful works of performance art one sensed it was something of a privilege to have experienced it. Calder, it is clear, not only broke ground in creating sculpture that moves, but sculpture that sings as well.

As we mentioned last month, another artist drawing huge crowds in London at present is the Chinese dissident Ai Weiwei. The Chinese president is now back at home after his state visit to the UK, but Ai Weiwei’s extraordinary exhibition of sculptures, films, photographs and re-created interiors continues to enrapture visitors to the Royal Academy. Anyone interested in ancient Chinese furniture and decorative arts will have been charmed by his transformations of antique ceramics, tables, chairs and stools. 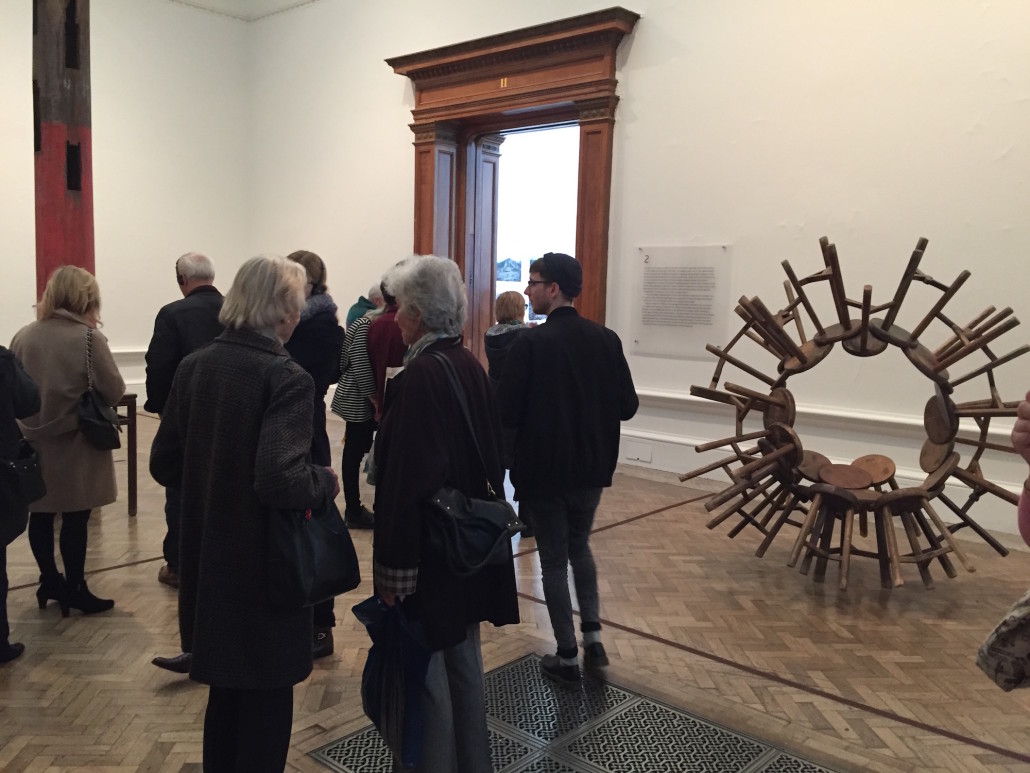 Visitors to the Ai Weiwei exhibition, which has drawn huge crowds to the Royal Academy of Arts. Image Auction Central News

Much more revelatory for those unfamiliar with the circumstances of his incarceration by the Chinese authorities are his re-creation of a series of rooms containing realistic models of himself and his guards, who stood watch over him at unnervingly close quarters during every waking and sleeping moment of his long imprisonment.

A stone’s throw from the Royal Academy in a corner of fashionable Mayfair is Shepherd’s Market, a warren of interesting little bars, buzzing boutiques and conversation-filled coffee shops. It is here that Abby Hignell, for the past nine years assistant to leading London sculpture dealer Robert Bowman, is poised to open her new gallery.

“It was time I broke out on my own,” Hignell told Auction Central News, “and finding this superb location has been a stroke of great good fortune.” 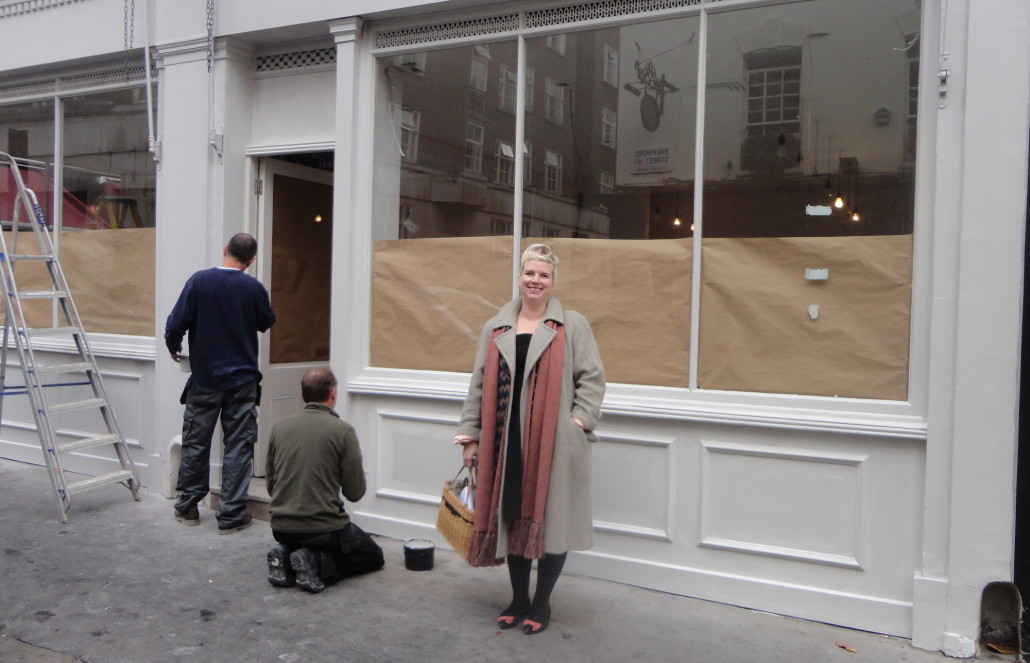 Sculpture dealer Abby Hignell in front of her new gallery in Mayfair, which will officially open in January. Image Auction Central News.

Having gained a wealth of experience essentially handling every aspect of the day-to-day business of a major London dealership, there’s not much Abby Hignell doesn’t know about the art trade. She is aware, however, that it will be a tough road ahead.

“I’m ready for the challenge,” she said as she instructed the builders and electricians who were busy transforming her premises into a smart new gallery for contemporary sculpture.

“Come and see me again at the end of January,” she said. “I promise things will look quite different by then.”

And so to the UK auction circuit. Seldom do military medals engender such a poignant reception as that currently greeting the imminent arrival on the auction block of the Distinguished Flying Cross posthumously awarded to Flight Lt. John Vere “Hoppy” Hopgood (1921-1943). 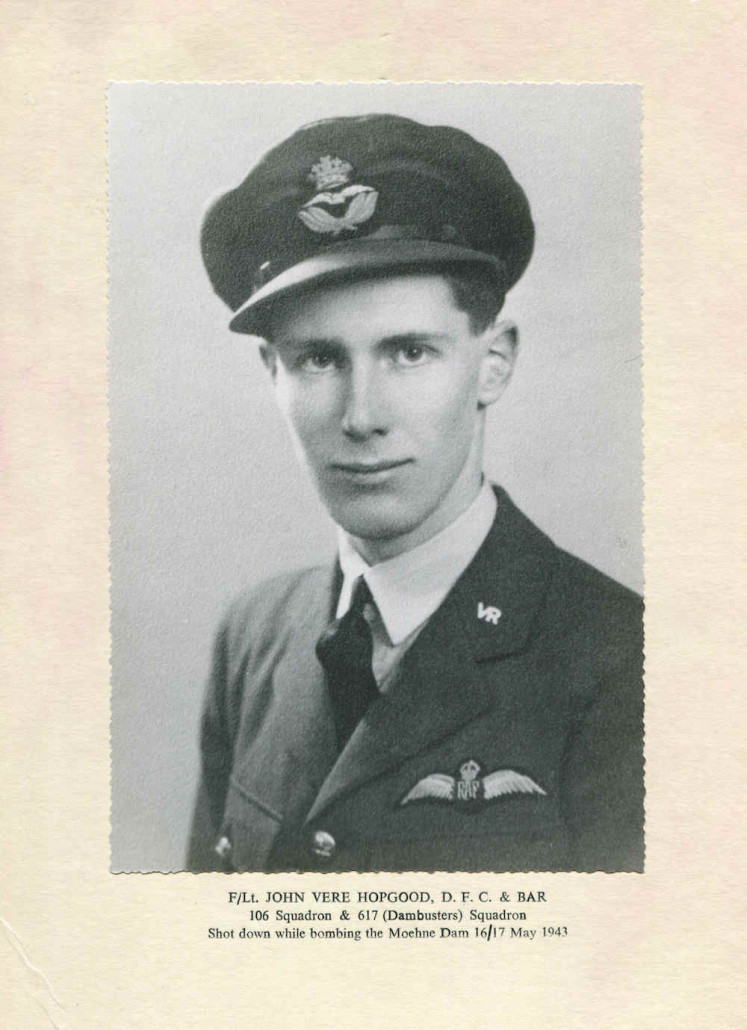 Lt. Hopgood was one of the heroes of the famous “Dambusters” raid on the Möhne, Eder and Sorpe dams in Germany on the night of the May 16-17, 1943. As recalled in the eponymous 1955 movie starring Richard Todd and Michael Redgrave, Hopgood’s Lancaster bomber, nicknamed “Mother,” was fatally struck by anti-aircraft fire. But before Hopgood crashed his plane he ascended to a sufficient height to allow his co-pilots to bail out to relative safety as prisoners of war. David Kirk, of London medal auctioneers Morton and Eden, who will sell the medal on Dec. 15, where it is estimated to fetch £30,000-£40,000 ($45,000-$60,000), described the medal as one of the most iconic DFCs (below) to come to auction in recent years. 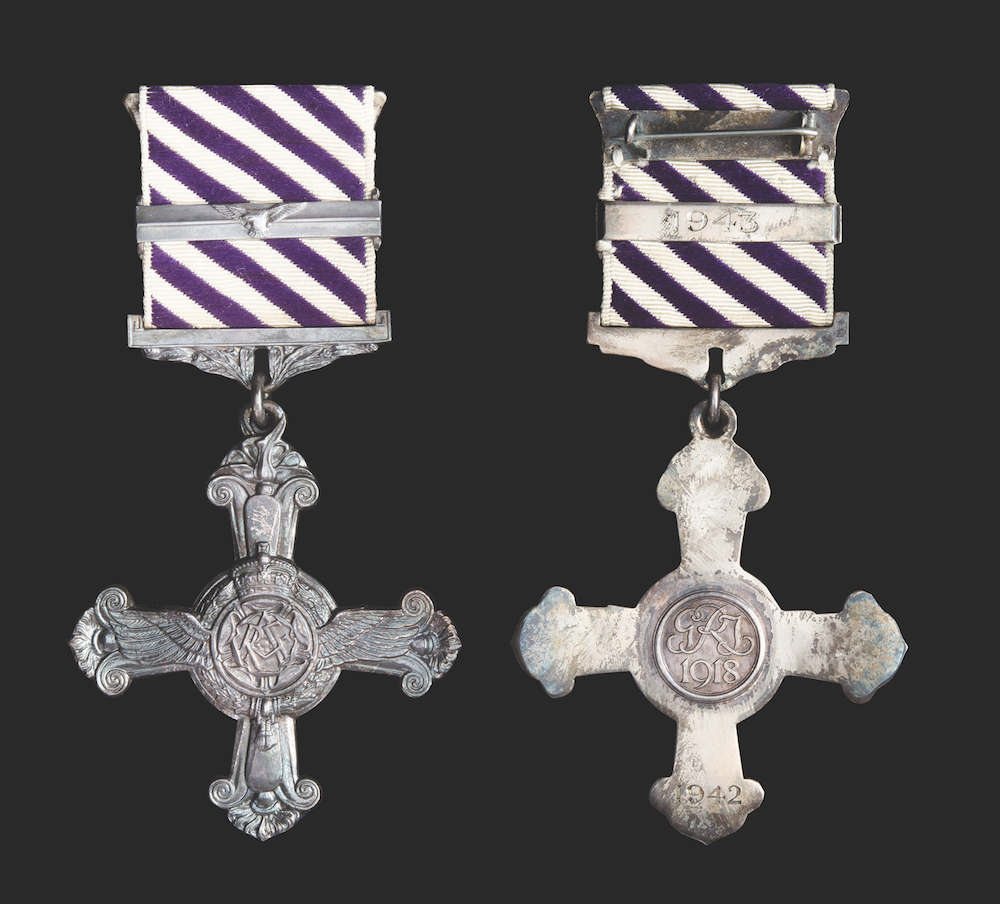 The Distinguished Flying Cross and Bar medal awarded to Flight Lt. John Vere ‘Hoppy’ Hopgood for his part in the famous Dambusters raid of 1943, to be sold by London auctioneers Morton and Eden on Dec. 15. Image courtesy of Morton and Eden

“Flight-Lieutenant Hopgood’s family has agonized over the decision to part with the medal but feel that John Hopgood himself would approve,” he said.

The proceeds of sale will go to the charity WaterAid, fittingly to help build a much-needed “sand dam” to benefit thousands of people in Uganda.

“Lieutenant Hopgood was evidently a very thoughtful and idealistic young man,” said Kirk. “The new dam will form a fitting memorial to his heroism and self-sacrifice on the Dambusters’ mission, of which his family can be duly proud.”

By way of contrast, one of the more interesting exhibitions on the near horizon is a display of material culture from the Pacific island of Fiji, which is due to open at the Sainsbury Center for the Visual Arts in Norwich in March. 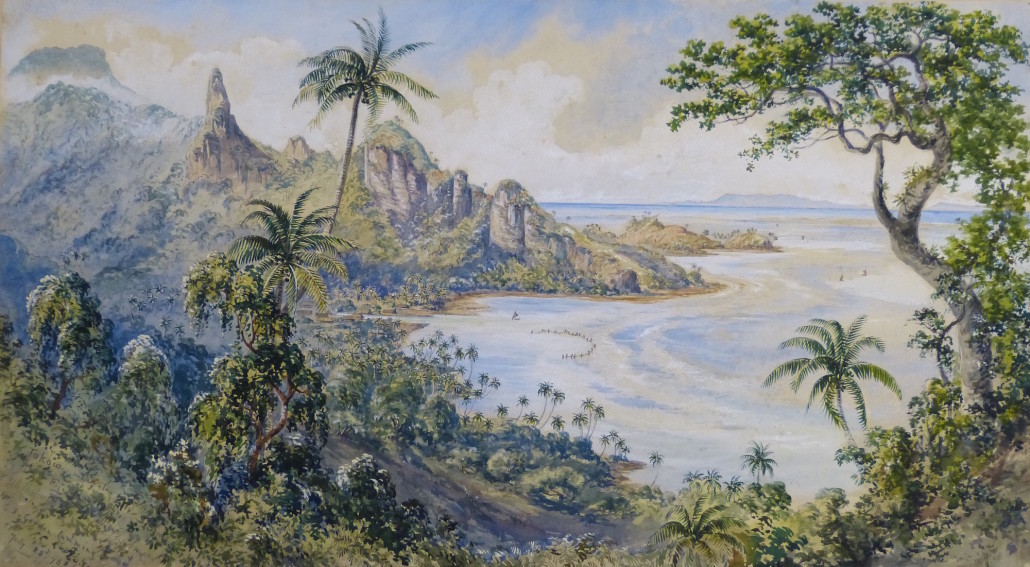 “Fiji: Art and Life in the Pacific” is a collaborative endeavor between the Sainsbury Research Unit, the University of East Anglia in Norwich and the Museum of Archaeology and Anthropology at the University of Cambridge. Artifacts, archives and pictorial material, including photographs, are being brought together to allow fresh perspectives on the art and history of Fiji, a place perhaps hitherto most familiar in the popular imagination from the Mutiny on the Bounty movies and the national team’s many memorable performances at the recent Rugby World Cup.

Certainly a small sample of the material that will be on display reveals an extraordinary level of craftsmanship. Nowhere is this more apparent than in the duck-form priest’s dish (below) included in the exhibition. 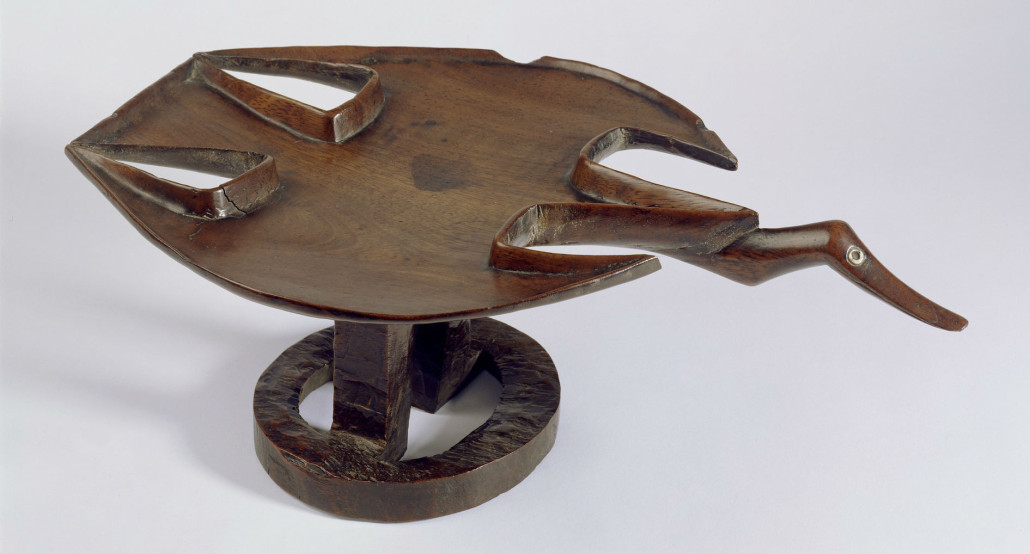 A ‘priest’s dish’ in duck form on pedestal, included in ‘Fiji: Art and Life in the Pacific’ at the Sainsbury Center. Image courtesy of Sainsbury Center for the Visual Arts Collection

Meanwhile one can only imagine how tired you would need to be to get a good night’s sleep with your head resting on a wooden pole (below). Perhaps 40 minutes of international rugby would do the trick. The exhibition runs March 7 to Aug. 12 at the Sainsbury Center in Norwich. 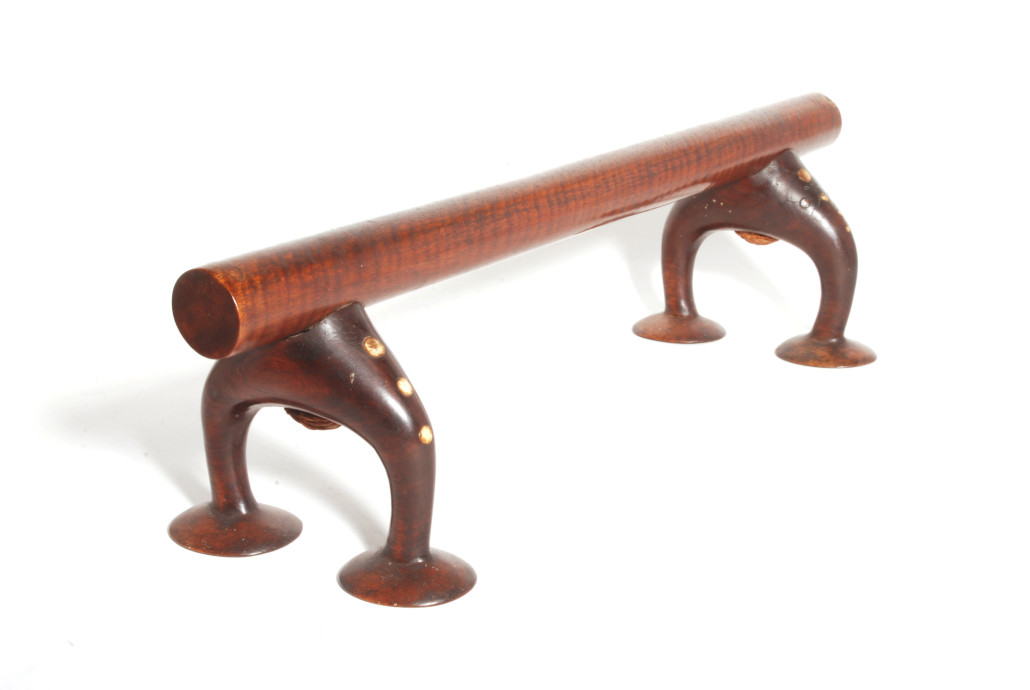 A wooden Fijian headrest which will be on display in ‘Fiji: Art and Life in the Pacific’ at the Sainsbury Center in Norwich from March 7 to August 12, 2016. Image courtesy of the Museum of Archaeology and Anthropology, Cambridge

Finally, a couple of interesting prices from today’s sale of important Irish art held by Dublin auctioneers Whyte’s. Top price of the sale was the €78,000 ($82,450) for Louis LeBrocquy’s oil on canvas titled Being of 2000, which sold just under the lower estimate, while Paul Henry’s lyrical landscape titled Connemara, depicting turf stacks in a boggy terrain set against distant mountains (below), which had been estimated to realize €40,000-€60,000, was eventually contested up to €66,000 ($69,700). 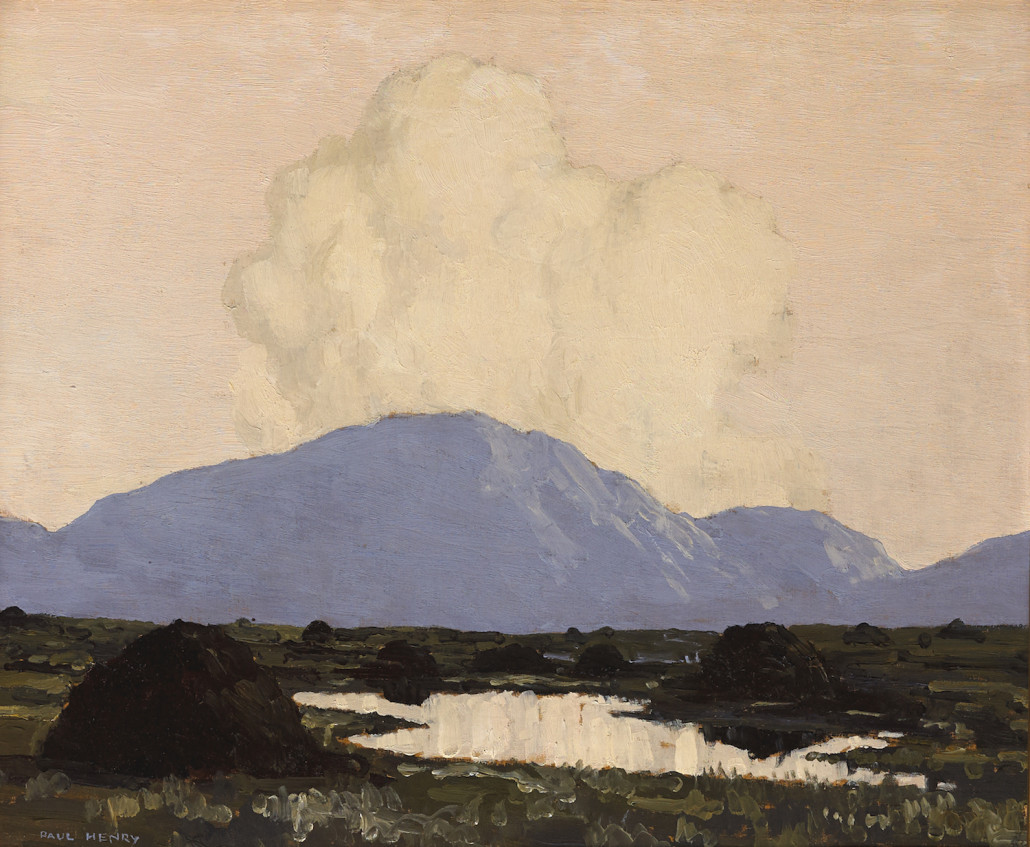