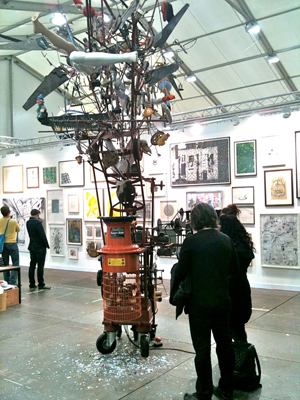 With the Eurozone teetering on the brink of oblivion, it may not be long before we’re all shredding our credit cards. At the Frieze contemporary art fair in London this week, British artist Michael Landy was happy to do it for you in return for a free drawing. Landy’s huge Rube Goldberg-style card-mashing contraption on the stand of London dealer Thomas Dane was just one of a multitude of wacky ideas that now passes for contemporary art at the annual fair in Regent’s Park.

If the atmosphere at last year’s fair signalled a sense of relief that the art market was, however miraculously, weathering the global downturn, this year’s fair seemed altogether more uncertain. Since its foundation nine years ago, Frieze has become notable for showing art that is way out on the ragged edge of experimentation. However, Landy’s mad machine notwithstanding, the work on display this year seemed relatively safe and cautious, with many of the bigger dealers eschewing the challenging material and opting instead for safe art by familiar brand-name artists. 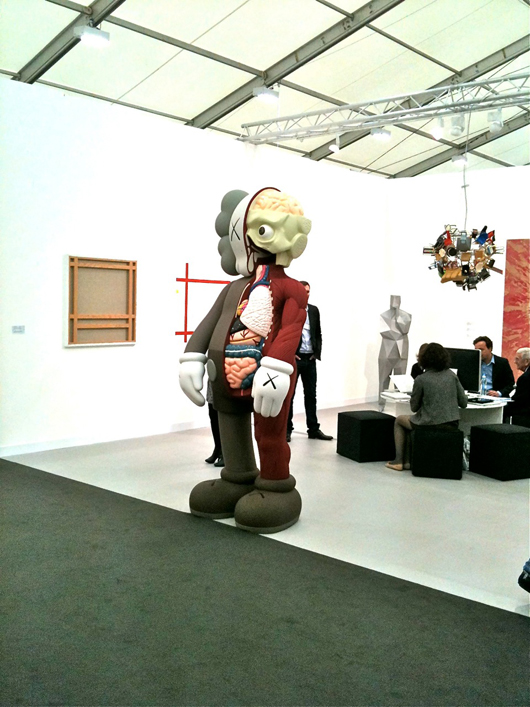 Most of the significant sales at Frieze take place in the first 24 hours and yet the fair’s most expensive item — a €75 million ($103 million) super-yacht — was still seeking a buyer when we visited on Thursday. This is a collaboration between young German multimedia artist Christian Jankowski and the Italian luxury yacht manufacturers CRN. If you buy the boat as a boat, it will cost you €65 million ($89,4 million); if you pay an extra €10 million, Jankowski will bless your purchase with a certificate that magically turns the yacht into art. If your budget won’t stretch that far, there is also a Riva power-boat on sale at €500,000 ($688,000) if bought as a boat, or €620,000 ($853,000) if anointed by Jankowski as a work of art. 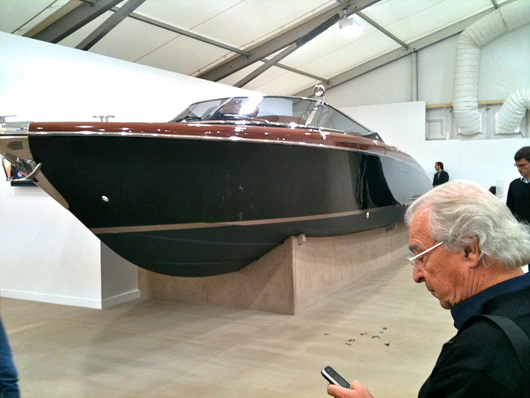 This Riva power boat, a collaboration between Italian luxury yacht manufacturers CRN and German artist Christian Jankowksi, is priced at €500,000 ($688,000) at the Frieze Fair. For an extra €120,000 ($165,000) Jankowski will give you a certificate that transforms it into a ‘Readymade’ work of art. Image courtesy of Auction Central News.

Luca Boldini, CRN’s marketing director, was on hand to reassure Auction Central News that the boat was no art world hoax. “This is very much in the tradition of Marcel Duchamp and the idea of the Readymade,” he told us. “Christian is very serious about this work and I am very confident that we will sell it. If we do, it will send a great wave around the world that will confirm the value of the project.”

Frieze Fair is now the London art world’s most important annual event, its influence spreading across the city as buyers fly in from around the world to see work brought by 173 exhibitors from 33 countries. Frieze may hog the limelight, but the buzz it generates also helps other events elsewhere in the capital in October.

The Pavilion of Art and Design in Berkeley Square, now in its fifth year, offers an opportunity to see works by the classic American modernists such as Robert Rauschenberg and Robert Motherwell, or by British masters like Henry Moore and Ben Nicholson that would look positively ancient compared with what is on show at Frieze. 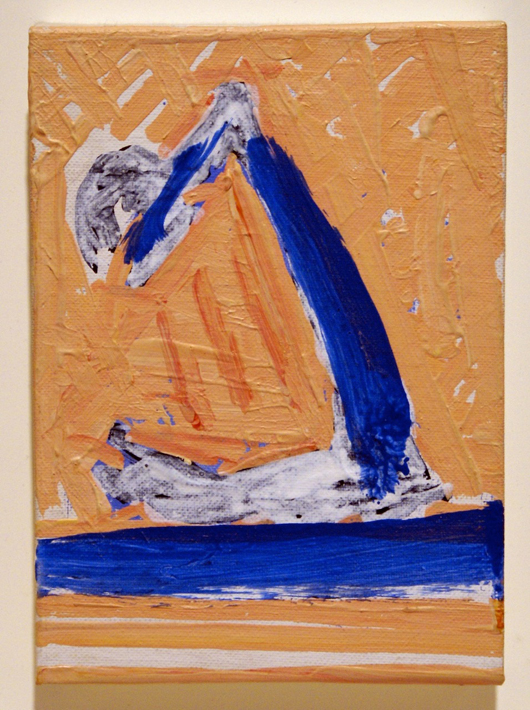 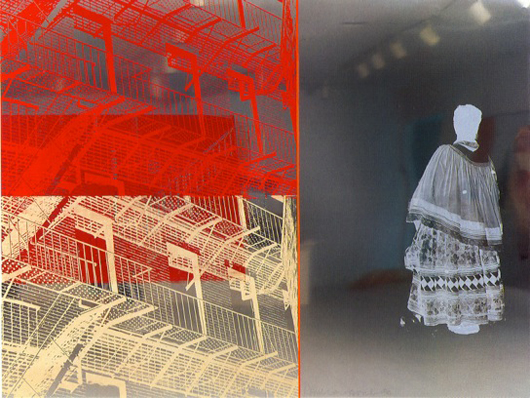 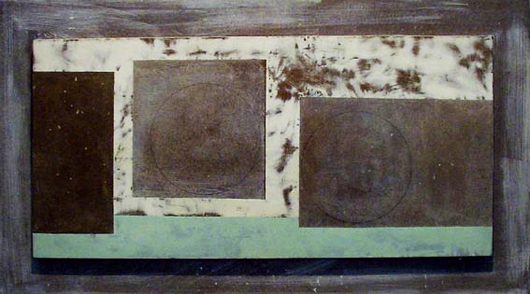 London dealer Bernard Jacobson is showing this work by Ben Nicholson (1894-1982) — ‘Dec 61 (Greek and Two Circles)’ of 1961 — at PAD London. Oil and pencil on carved and incised gessoed board. Image courtesy of Bernard Jacobson Gallery.

By early November, the Frieze frenzy will have subsided, and the more considered atmosphere of “Asian Art in London” will commence, with many of the world’s most important Asian art dealers and collectors flying in for the 10-day event from Nov. 3-12. Typical of the more promising shows in the Asian art calendar is an exhibition entitled “Ivory — Material of Desire” to be held at the Dover Street premises of London textile and works of art dealer Francesca Galloway.

Ivory is now widely recognised as one of the most controversial materials in the history of the decorative arts. In the late 19th and early 20th century, vast quantities were harvested from the Congo under the brutal regime of King Leopold II of the Belgians. Art nouveau ivory objects from that era deftly disguise the ghastly source of the raw material. Ivory has, of course, been a precious commodity since antiquity and Francesca Galloway’s exhibition will include a carefully selected range of objects dating back to the 16th century, the material here predominantly originating from Asian elephants.

Among the most beautiful items on display is a 16th- or 17th-century Ceylonese ivory openwork jewel casket fitted with a multitude of interior drawers veneered in tortoiseshell and ivory with silver mounts and handles and enclosed by a pair of doors.

Two views of a 16th/17th-century casket from Ceylon for storing jewelery and precious objects, veneered in tortoiseshell and ivory with silver mounts and handles. On display in Francesca Galloway’s exhibition ‘Indian Goods for the Luxury Market’ at 31 Dover St. from Nov. 3 to Dec. 9. Image courtesy of Francesca Galloway.

Two views of a 16th/17th-century casket from Ceylon for storing jewelery and precious objects, veneered in tortoiseshell and ivory with silver mounts and handles. On display in Francesca Galloway’s exhibition ‘Indian Goods for the Luxury Market’ at 31 Dover St. from Nov. 3 to Dec. 9. Image courtesy of Francesca Galloway.

This is the sort of thing that would not have been out of place in a Spanish or Portuguese princely collection and it will be a rare treat to see it at close quarters.

Also included is an 18th-century howdah from Murchidabad decorated with Mughal openwork ivory over mica, a technique designed to make the seat shimmer in the sunlight, thereby adding to the sense of luxury. 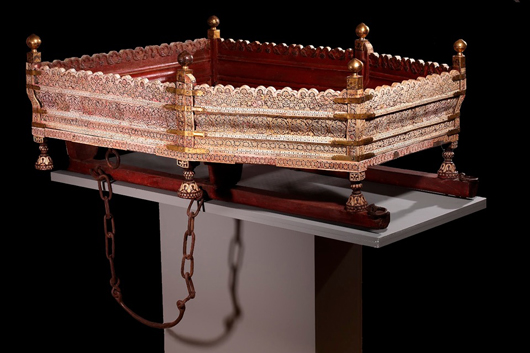 This 18th-century howdah decorated in openwork ivory over mica, Murchidabad 1760-80 is included in Francesca Galloway’s exhibition ‘Indian Goods for the Luxury Market’ from Nov. 3-Dec. 9. Image of courtesy Francesca Galloway.

Although it may seem somewhat rarefied and specialist when compared with the often crude impact of much of the contemporary art on display at Frieze, Asian Art London offers some astonishing visual delights for those prepared to keep their eyes and minds open. One of the most extraordinary objects going on display in November is an 11-headed Tibetan bronze Avalokitesvara figure inset with precious stones and dating from around 1400. 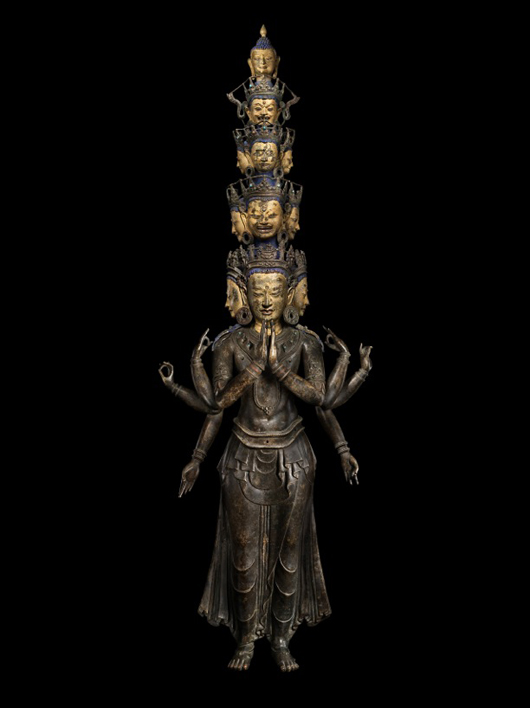 An Avalokitesvara Buddhist figure inset with precious stones and dating from around 1400, to be shown at London dealers Rossi and Rossi’s ‘Asian Art London’ exhibition at their gallery at 16 Clifford St. from Nov. 3-12. Image courtesy of Ross and Rossi.

This 4-foot 3 1/4-inch masterpiece will be the prize of London dealers Rossi and Rossi’s “Asian Art in London” exhibition at their gallery at 16 Clifford St. from Nov. 3 to 12. The exhibition focuses on a private European collection of ritual objects formed over two decades from the late 1970s and includes several works exhibited at the Guimet Museum in Paris and published in their landmark catalog, Rituels Tibétains: ‘Visions Secrètes du V Dalai Lama.’

Also timed to coincide with the “Asian Art in London” event is the launch of an important new publication devoted to Chinese export porcelain — The RA Collection of Chinese Ceramics: A Collector’s Vision by Maria Antónia Pinto de Matos, director of the National Tile Museum in Lisbon.

Welsh and his business partner Luísa Vinhaís will be launching the book on Saturday, Nov. 5, at their gallery at 116 Kensington Church St. when the author will give a lecture at 5 p.m. and will sign copies of the book.

A selection of works from the Albuquerque Collection will be on display at the gallery, including an extraordinary Qing dynasty Qianlong period crab tureen and stand 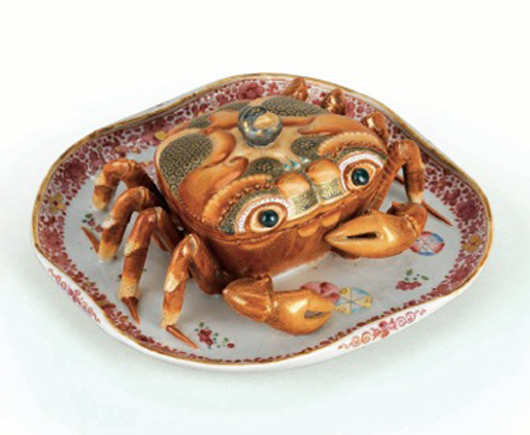 This superb Chinese Qing dynasty, Qianlong period export porcelain crab tureen, decorated in Famille Rose enamels and gold, circa 1770, from the collection of Brazilian entrepreneur Renato de Albuquerque, is illustrated in a new book on the Albuquerque collection to be published by London dealer Jorge Welsh and launched during the annual Asian Art in London event from Nov. 3-12. Image courtesy of Jorge Welsh. 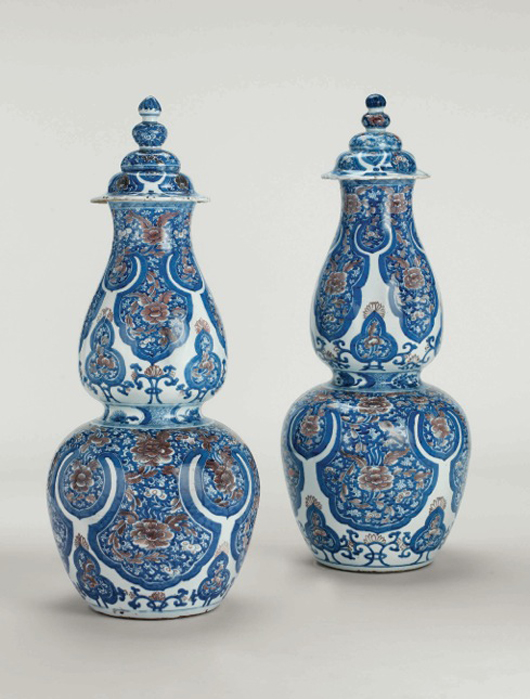 The launch will coincide with an exhibition at the gallery entitled “A Celebration of Chinese Export Porcelain,” which will provide yet another reason for the world’s most passionate collectors and dealers in Asian art to make the trip to London in November.