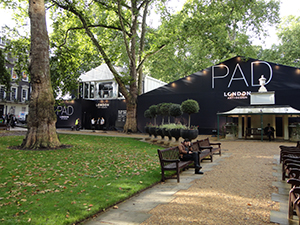 LONDON – One or two events in London this October offered a telling indicator of how the art market here has changed almost beyond recognition in a very short space of time. The extent to which the enormous, sprawling Frieze art fair and its recent offshoot, Frieze Masters, now dominate the autumn London art calendar is perhaps not surprising given the inexorable growth of contemporary art as an alternative investment target for High Net Worth Individuals (HNWIs). This year, Frieze deepened still further the seemingly irreversible marriage of culture and finance by adding fashion designer Alexander McQueen to its list of prestige sponsors that already includes Deutsche Bank.

So much for commerce, but rather more surprising is how the Frieze brand continues to bewitch the general public given the fairs’ staggeringly high entrance fees. The apparent willingness of the average punter to fork out the £50 fee to get access to both Frieze tents is surely evidence that the new “event-driven” art market is as much about entertainment and fantasy window-shopping as it is about the big-ticket art investments that only privileged HNWIs can afford. That said, the fact that in a single month London can absorb both the Frieze fairs plus the prestigious PAD (the Pavilion of Art and Design) in Berkeley Square, which hosted a further 50 high-end dealers, testifies to just how much wealth is now concentrated in the capital.

Not everyone sees the rise of Frieze as a positive development, however. British artist John Keane, the UK’s official Gulf War artist in 1994, complained that Frieze’s exclusivity hinders other artists’ opportunities. “While Frieze is going on it is hard for anyone else to be seen,” he told The Guardian newspaper. “All the newspapers cover the same shows and you tend to see the same artists’ names coming up at the Tate, Hayward and Whitechapel galleries.”

London Eye might take issue with that assessment, however. We patrolled the smaller “off-piste” London art galleries during Frieze week and found lots of shows brimming with activity and enthusiasm. The Josh Lilley Gallery in Riding House Street shows work by a carefully selected group of artists of a very high caliber. When we visited the gallery’s recent exhibition of work by Italian-born, Berlin-based artist Benedetto Pietromarchi there was an exciting buzz in the air 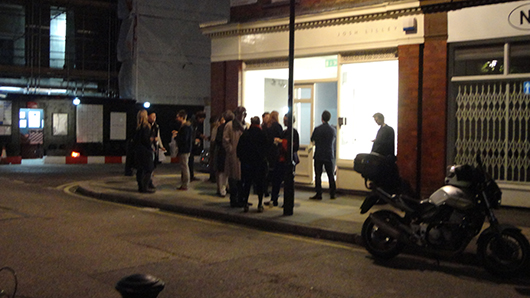 A young gallery crowd assemble at the Josh Lilley Gallery in Fitzrovia for the exhibition of work by Benedetto Pietromarchi during Frieze week. Image: Auction Central News.

. Unlike so many of the blue-chip contemporary artists one encounters at Frieze, Pietromarchi is classically trained and thus is an accomplished draughtsman, ceramicist and sculptor who makes all his own work. His exhibition comprised beautifully modeled ceramic birds of prey perched on pipes and cylinders, juxtaposed with handmade, polychrome-glazed ductwork fragments that might have been retrieved from the seabed, all encrusted with suggestions of marine flora and fauna. This was magical, hugely original work of the kind that can only emerge from a fertile imagination harnessed to exquisite craft skills. 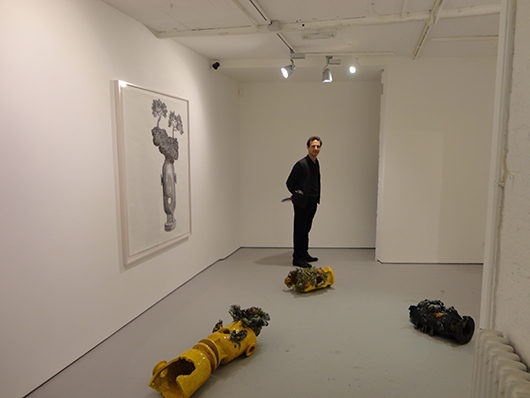 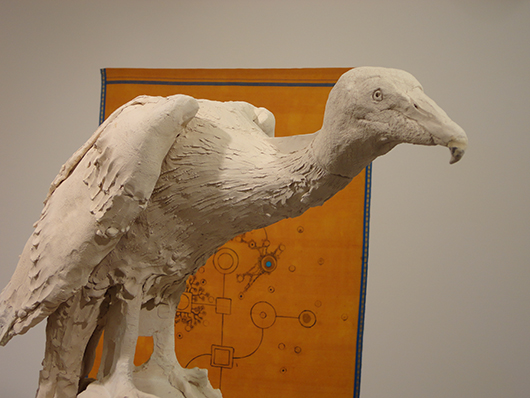 Directly opposite the Josh Lilley Gallery, the T.J. Boulting Gallery was showing an astonishing installation of life-size sculptures of cattle modeled in clay by British artist Stephanie Quayle. 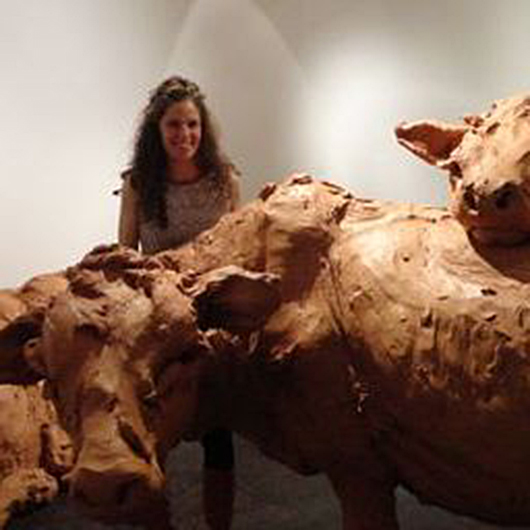 Quayle, who lives on a farm on the Isle of Man, has an intimate knowledge of the livestock with which she spends her working days. This enables her to bring an extraordinary expressive realism to her figures. She had several tons of clay delivered to the gallery and modeled the cattle on site, the finished work having a robust surface texture alive with evidence of the artist’s hand. 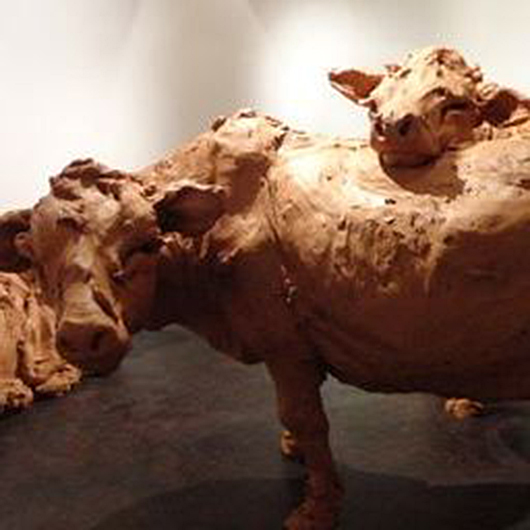 A detail of the life-size installation of clay cattle by Isle of Man-based sculptor Stephanie Quayle at the T.J. Boulting Gallery. Image: Auction Central News.

In an adjoining room other works explored the deep primal connections between man and beast, giving rise to the exhibition’s title—“Lion Man.” The gallery was packed when we visited, proving that Frieze cannot suck all the air out of the city.

After seeing these thrilling, handmade shows in the funky heartland of Fitzrovia it was hard not to look with something of a jaundiced eye on “Candy,” a joint exhibition of work by Damien Hirst and Felix Gonzalez-Torres over at the Blain Southern Gallery just round the corner from Sotheby’s main saleroom. 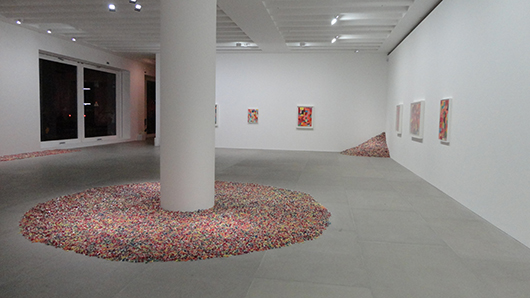 The show tried to promote some sort of correspondence between the late Cuban-born American sculptor and the erstwhile enfant terrible of British art. If anything it offered another emphatic reminder that Hirst can neither paint nor sculpt. All his most celebrated animal, spot and butterfly works were made by anonymous artists who were paid to fabricate the stuff on his behalf. Thus the juxtaposition at this recent London show of his infantile abstract canvases with Gonzales-Torres’s now famous heaps of wrapped candy came over not as an intellectually stimulating fusion of disparate creative practices but rather as a desperate attempt to capitalize on the fact that London during Frieze week is teeming with people with more money than critical sense.

The brains behind the Blain Southern “Candy” show—London dealers Harry Blain and Graham Southern—were once the founding proprietors of the Haunch of Venison contemporary art gallery just up the road in New Bond Street. That gallery grew out of a marriage of Blains and the celebrated Anthony d’Offay Gallery and became so successful that it was eventually acquired by Christie’s auction house, who saw it as an opportunity to grow their private treaty interests. The most recent example of the morphing of Christie’s into dealers also came during Frieze month when they launched their new Christie’s Mayfair private treaty business at what was originally the Haunch of Venison premises at 103 New Bond Street. ( 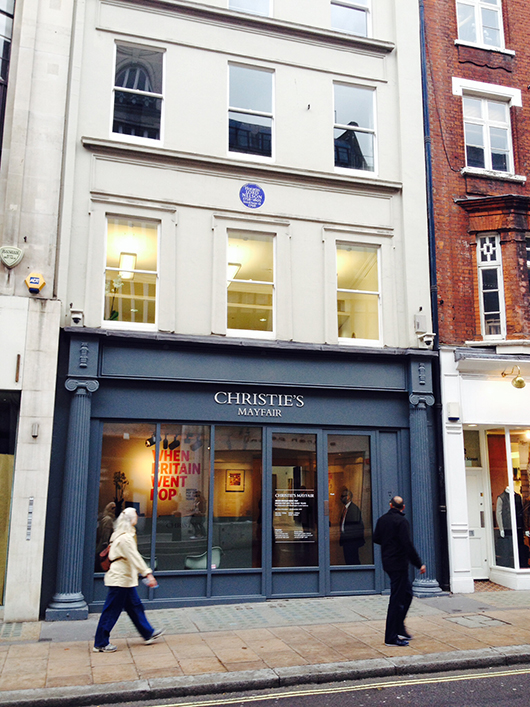 The inaugural exhibition—“When Britain Went Pop!”—was a collaboration between Christie’s and leading London dealers Waddington Custot Galleries. Waddington Gallery founder Leslie Waddington had been a pivotal figure in the promotion of Pop Art in Britain in the 1950s and 1960s and this exhibition grew out of his friendship and association with Christie’s director Hugues Joffre. Arguably one of the most comprehensive surveys of a movement which, despite many misconceptions, was actually born in Britain rather than in America, the show included numerous seminal works by David Hockney, Richard Hamilton, Eduardo Paolozzi, Peter Blake and many of their contemporaries.

Apart from the marvelous catalog, the most notable thing about the “When Britain Went Pop!” exhibition was the sheer number of works accumulated over the years by the dealers involved. We asked where the works came from and were told that many of the canvases and sculptures originate from Waddington Custot’s inventory and have not been seen in public for decades. A major downside, however, was the lack of precise information and the overcrowded hang. 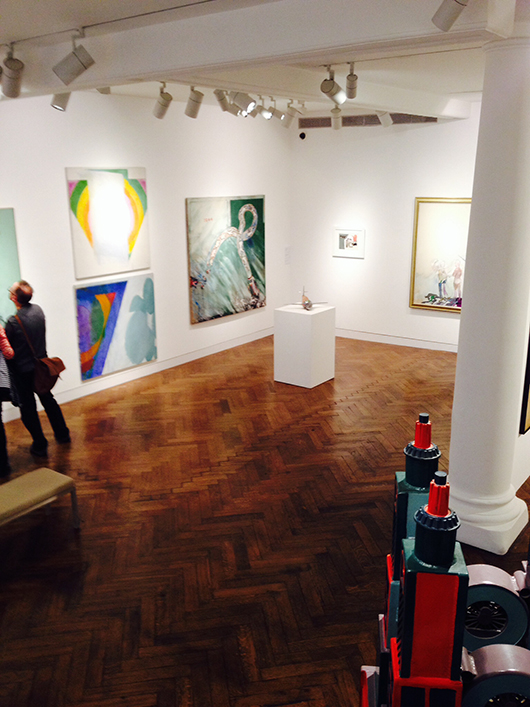 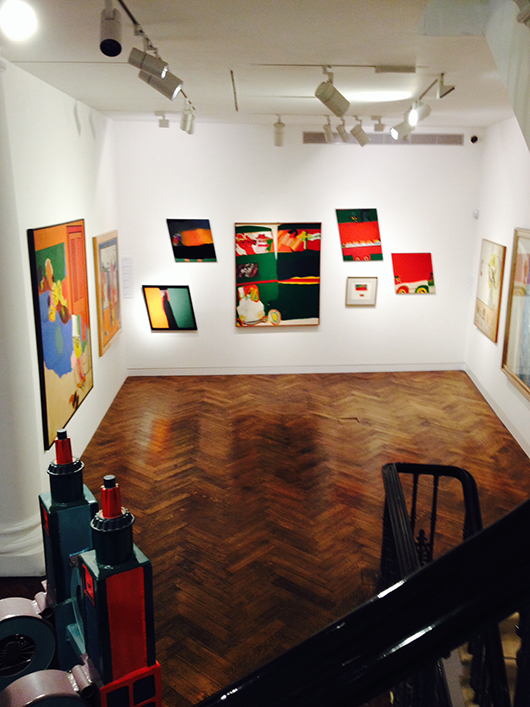 The title labels had been stuck in random clusters to the extreme edges of the walls making it difficult to see which works they referred to. Nevertheless, it was remarkable to see such an important show assembled not by a public gallery like the Tate, but by the trade—auction houses and dealers working in collaboration.

If the dominance of art fairs and the transfiguration of auctioneers into dealers were not enough to make a case for a changing art world landscape, we could add the ever more prominent role of the emerging economies in the London scene. Barely a month passes without another show popping up to cater for the thousands of Chinese, Brazilian, Middle Eastern or Russian collectors either just visiting London or already domicile in the city. Increasingly many of the city’s major real estate projects are being bought up by overseas investors seeking a bricks-and-mortar foothold in one of the world’s leading centers of unbridled wealth generation. And they need works of art to hang in these homes and offices.

There are now estimated to be around 500,000 Russians living in London, a statistic that doubtless has not gone unnoticed by the Willow Gallery in Duke Street. They have teamed up with Amsterdam-based icon dealers Jan Morsink Ikonen to launch an exhibition of Russian icons to coincide with Russian art week in London, Nov. 23-29. This highly specialist field ought to chime with London’s wealthy Russian community since the Russian art market, like the Chinese art market, is driven by a combination of new money and a desire to regain their nation’s dispersed cultural heritage. The Willow Gallery exhibition includes some wonderful hieratic imagery such as the Christ Enthroned as a High Priest 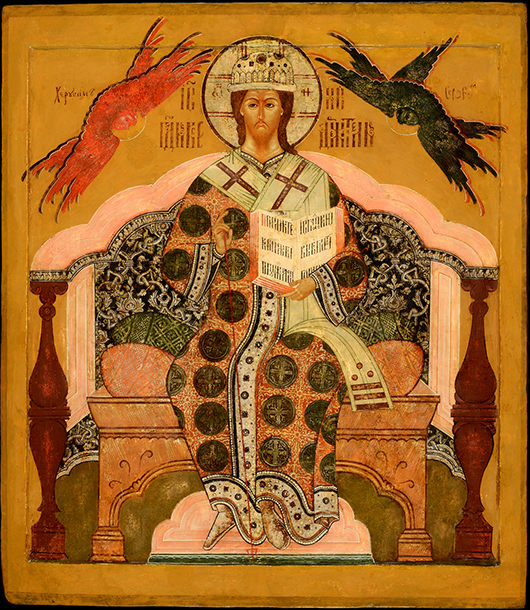 This Russian icon titled ‘Mother of God Tichvinskaya,’ Moscow, dating from the second half of the 16th century, from the collection of Jan Morsink, Amsterdam, will be on display at the Willow Gallery, 40, Duke Street, for Russian Art Week, Nov. 23- 29. Image courtesy Willow Gallery and Jan Morsink.

and the gentle Mother of God Tichvinskaya 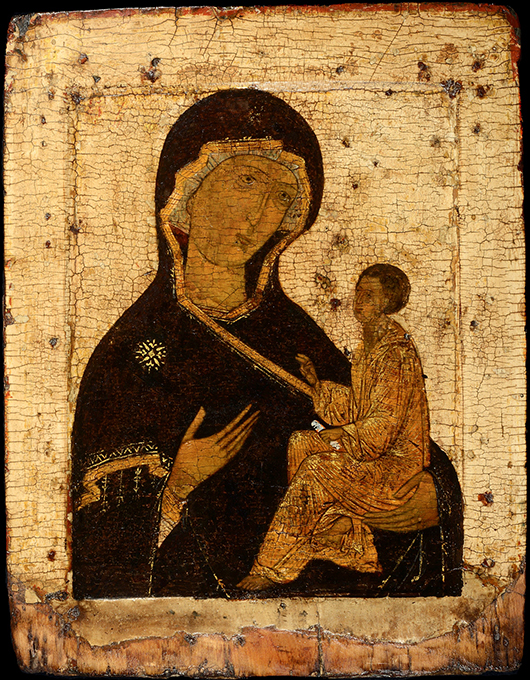 ‘Christ Enthroned as High Priest,’ Russia, Kostroma region, mid-17th century, from the Jan Morsink collection, will be on view at the Willow Gallery from Nov. 23 to 29. Image courtesy Willow Gallery and Jan Morsink.

Kimball Sterling to sell canes made in US, Europe Nov. 9
Scroll to top