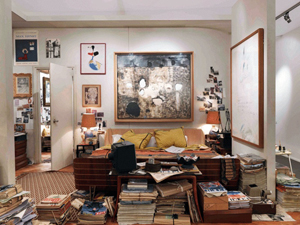 LONDON – The mighty Frieze fairs are over for another year and for once all the post-event chatter was focused not on which celebrity flew in for the opening night, but how one particular stand managed to inject some imagination into what is in grave danger of becoming a tired retail format. Helly Nahmad, son of the much talked-about Nahmad art brokerage dynasty, broke with convention by turning his stand into the interior of the home of an imaginary art collector circa 1968. (Fig. 1)

The interlinked rooms were furnished with 1960s period chairs, beds, desks, shelves groaning with artists’ monographs, and even a black and white television showing scenes from nouvelle vague cinema classics and news clips from the Paris student riots. A Miles Davis track played in the background and even the ashtrays bulged with cigarette butts as if our chain-smoking aesthete had just popped out for a Pernod. 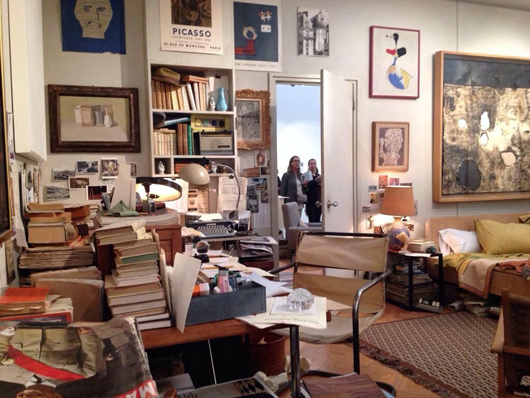 ‘The Collector’, Helly Nahmad’s stand at Frieze Masters, which bewitched most visitors through its forensic attention to detail. Image courtesy Frieze Masters.

“He’s not living to entertain people here, he’s living and breathing art,” Nahmad was quoted as saying about his absent subject. His comment was apparently intended as a critique of today’s investment-fixated socialite collectors and not, as a few more jaundiced commentators suggested, as an obliquely coded snipe at his New York-based art-dealing brother (also called Helly) who was recently released after serving a jail term for his role in organizing illegal poker soirées for his rich Hollywood film star friends.

Nahmad’s “Collector” diorama is being viewed by many as what could be a game-changing intervention into high-end art fair stand design. It may be some time, however, before it exerts its influence on the more staid tradition of middle-market antiques fairs such as the LAPADA Fair in Berkeley Square and the forthcoming Winter Olympia Art and Antiques Fair taking place from Nov. 3-9. That said, the recent LAPADA Fair was, by all accounts a resounding success. 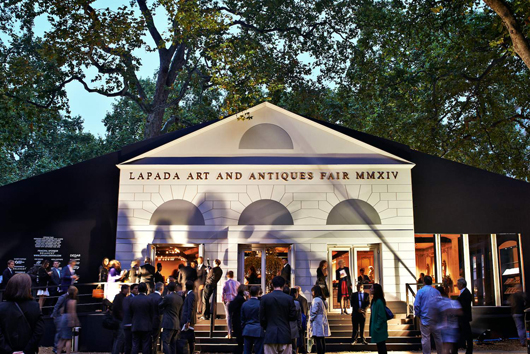 An exterior shot of the recent LAPADA Fair in Berkeley Square, which saw record attendance figures. Image courtesy of LAPADA. 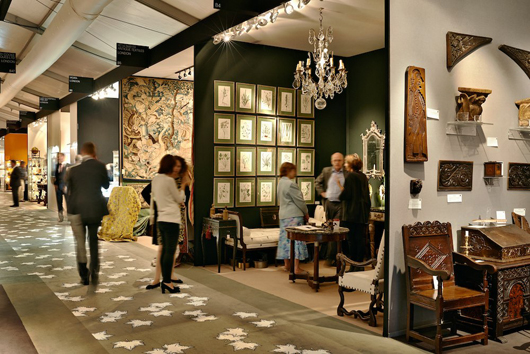 Many of the world’s wealthiest individuals are now choosing to make London their first or second home, with overseas investors having a marked impact on property prices. These emerging economies are also driving up prices in the art market as Russians and Chinese seek to buy back important examples of their cultural heritage. This week sees the beginning of Asian Art London, the capital-wide festival that brings Asian collectors flocking to visit London’s leading specialist dealers, so the buying frenzy is set to continue.

With some 150 cities in China expected to have populations of 1.5 million or more by 2020, the country’s museum-building boom is in full spate. All those museums need filling with art, and thus it is no surprise that China is now such an active presence in the global market, particularly for Chinese porcelain and contemporary art.

The interior of the impressive Yuz Museum of Contemporary Art in Shanghai, one of the new breed of high- profile museums going up all over China. Image Auction Central News.

The Ming exhibition now on at British Museum is rekindling interest in China’s 15th century blue and white wares and the art trade is responding with a range of relatively affordable ceramics aimed at “entry level” collectors. We hear much about the replicas being churned out of Jingdezhen, home of the famed Ming porcelain kilns, but not everything if quite so problematic. A new wave of beautiful contemporary Chinese ceramics are also coming out of Jingdezhen, albeit bearing a striking resemblance to their ancient cousins.

New York gallery FitzGerald Fine Arts, who also have bases in Jingdezhen and Beijing, will be located at the Weiss Gallery in Jermyn Street during Asian Art London, where they will be showing a range of contemporary wares made in Jingdezhen. 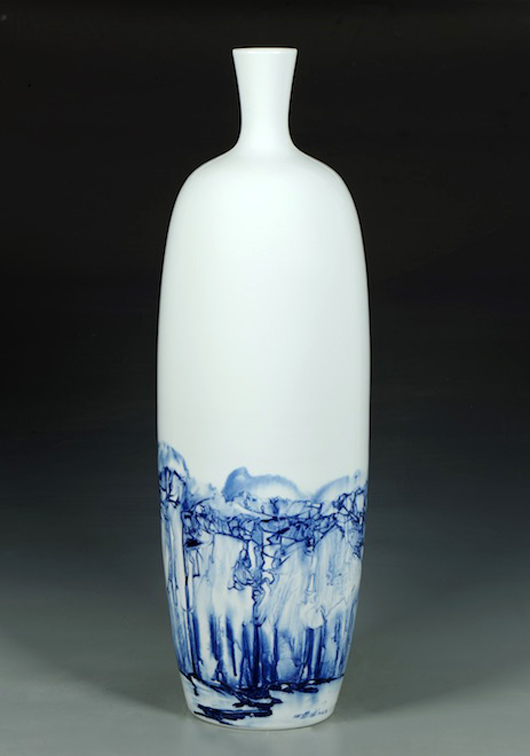 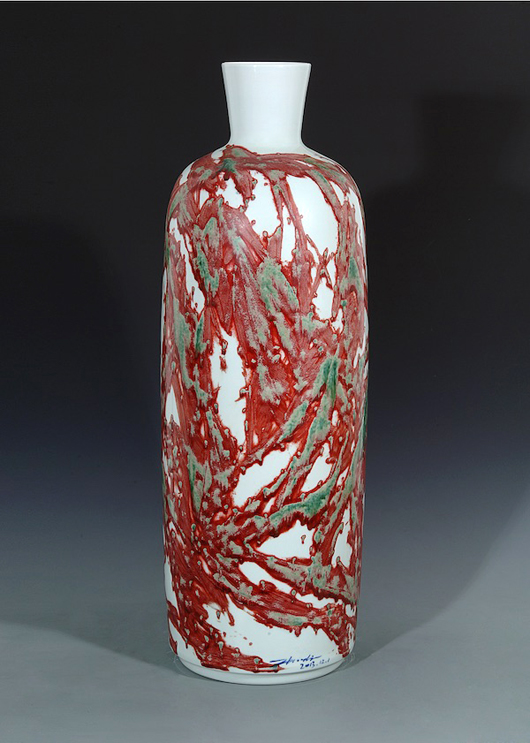 And so to one or two other interesting exhibitions opening in London this month. Modern British dealer Osborne Samuel in Bruton Street is launching an exhibition of photography in association with London dealers Beetles and Huxley that will span a broad range of artists, periods and subjects.

Bill Brandt’s 1957 portrait of Salvador Dali, which will be on show at Osborne Samuel’s groundbreaking photography exhibition from 20 November to 23 December. Image courtesy Osborne Samuel and Beetles & Huxley Gallery.

Also on view will be a rare and unusual group of exploration photographs, including some of Frank Hurley’s iconic photographs of the Shackleton Expedition, plus a selection of original, rare NASA photographs from seminal space missions. These are sure to capture the imagination in a month when the American space program saw a setback with the explosion of the unmanned Cargo Space Shuttle in Virginia and with Christopher Nolan’s epic new space movie Interstellar poised to hit UK film screens.

Another inviting photographic exhibition opening this month is a display of photographic images by the great Latvian-born ballet dancer Mikhail Baryshnikov, opening at ContiniArt in Mayfair on Nov. 29 and continuing until Jan. 31. Baryshnikov the dancer is considered by many to have been the true heir to Rudolf Nureyev, but his work as a photographer of dance is less well-known. It will come as no surprise that his experience on stage has given him extraordinary aesthetic vision as a photographer and his work is alive with a sense of color and movement and the dynamic energy of bodies under the controlled stress of dance discipline. 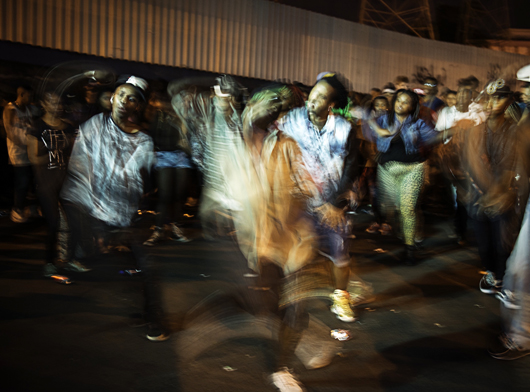 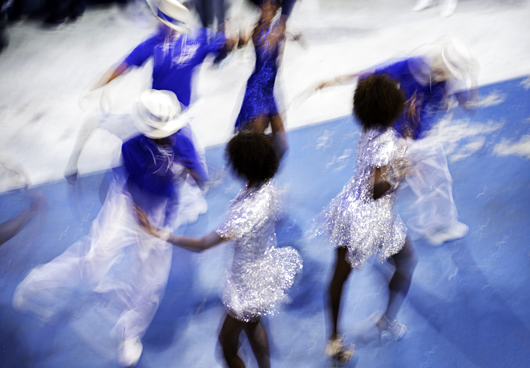 The work of Turner Prize-winning contemporary artist Gillian Wearing will be familiar to most enthusiasts of contemporary art. Her work has also made extensive use of photography, most notably in her 1993 work, Signs that Say What You Want Them To Say and Not Signs That Say What Someone Else Wants You To Say. Now she has made a work of public sculpture in traditional bronze titled A Real Birmingham Family.

An alternative title might have been A Work of Public Sculpture That Says What Real Birmingham Families are Like and Not What the Media Wants You To Think They Are Like. The subjects of the work, the Jones family, consist of two sisters, Roma and Emma, both single parents, and their two sons Kyan and Shaye. They were selected in August 2013, as “a real Birmingham family” by the artist and a diverse panel of community, cultural and religious figures. The work is now on display in Centenary Square outside the new Library of Birmingham. Given the work’s innovative take on the conservative tradition of public sculpture, it will be interesting to see how A Real Birmingham Family goes down with the broader Birmingham public.

And finally, we regret to report the theft of two works of contemporary sculpture from FOLD Gallery in Clerkenwell, in the East End of London. The two works, by the popular young British artist Tim Ellis, went missing from the gallery last Saturday.

FOLD Gallery director, Kim Savage, said, “It appears the gallery was broken into for the sole purpose of obtaining certain sculptures on display from the Tim Ellis solo show. Four of the 11 sculptures were selected, each with a bold and common aesthetic. What convinced us this was a ‘steal to order theft’ was that none of the paintings, which hang like banners and would be easily transported, were touched. The gallery was left in good order and there was no damage to the remaining artwork. The thieves went to significant effort to gain access to the gallery, entering through a side door hidden from the street and using heavy equipment to pry and destroy the magnetic, code-operated lock.”

If you have any information regarding the theft or have seen or heard mention of the works in question, please contact Kim Savage at kim@foldgallery.com, Tel: 0207 253 3039.

Jade gets the green light at Sworders auction Nov. 11-12
Scroll to top