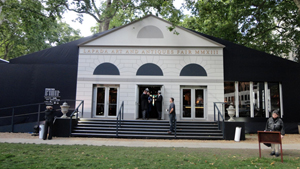 The LAPADA Art and Antiques Fair marquee in London’s Berkeley Square was the place to be, kicking off the autumn fair season in the capital. Image: Auction Central News.

“This is busier and more lively than the private view evening at the Masterpiece Fair,” a London-based Russian art consultant told Auction Central News as she strolled around the 2013 LAPADA Fair marquee in Berkeley Square on Sept. 27.

The fair’s location in one of Mayfair’s prettier squares makes it a great place to stop for lunch.

The view from the first-floor restaurant at the LAPADA Fair in Berkeley Square. Image: Auction Central News.

However, you need to keep your wits about you when walking around inside the fair if you don’t want to bump into a tree. 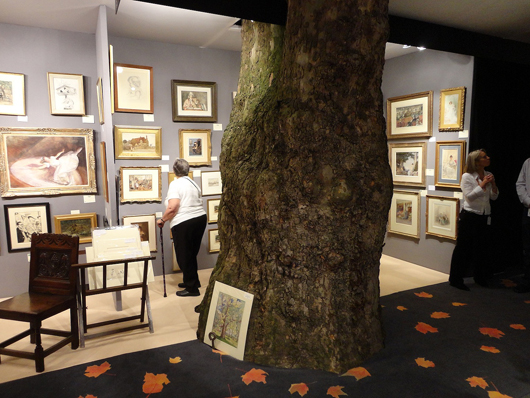 Nature and culture: a mature tree is no impediment to the enjoyment of the LAPADA Fair. Like the fair, you just walk around it. Image: Auction Central News.

Happily the British trade is made of stern stuff and won’t let little things like tree trunks or recessions get in their way.

A “busy” fair does not necessarily mean business is being done, however. Seasoned fairgoers can generally tell within an hour of walking around one of these events whether people are buying or just looking. The real picture emerges only when you start talking to the trade. 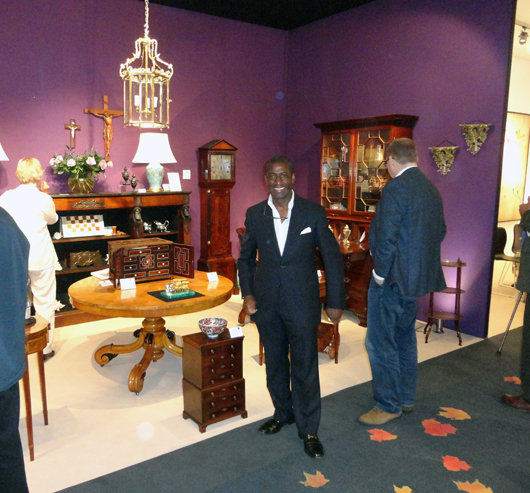 “The wealth is out there but rich people tend to lack confidence and the recession is still biting.” This makes it tough for dealers who need to cover the increasingly high cost of stand rentals at these events: “You won’t get much change from £20,000-£25,000 ($32,250-$40,350) and then you’ve got to make something for yourself,” said Cato. Among the pieces he was hoping to sell was a fine and rare Regency rosewood cylindrical bookcase priced at £23,000 ($37,100). 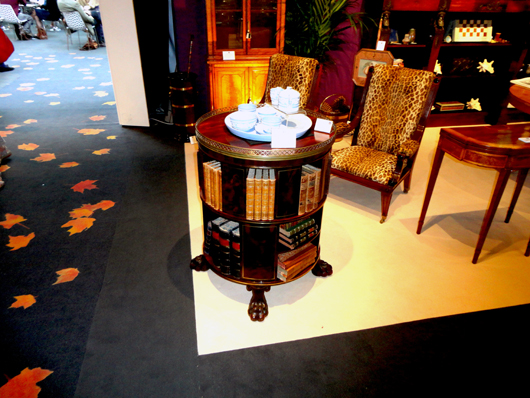 This Regency rosewood cylindrical bookcase was for sale with Edenbridge dealer Lennox Cato at the LAPADA Fair, priced at £23,000 ($37,100). Image: Auction Central News.

Specialist glass dealer Mark West was reasonably upbeat. He showed us a beautiful Bohemian ruby overlay glass vase engraved with a view of the Crystal Palace Great Exhibition, priced at £4,400 ($7,100). How much business was he doing? “Put it like this,” he said. “We’ve got fewer things now than when the fair opened two days ago.”

Versatile dealer and decorator Peter Woodward of The Blanchard Collective in Wiltshire was showing a wide range of paintings and affordable works of art and was optimistic about the atmosphere and the interest shown during the first two days. 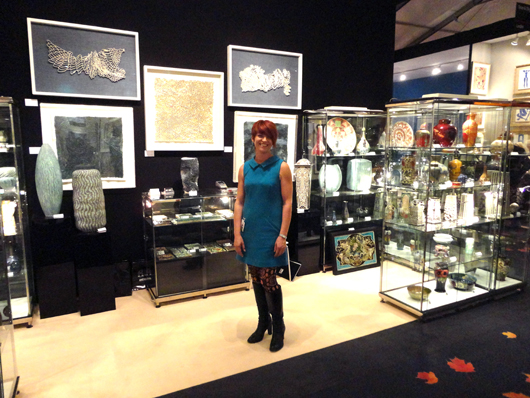 Alison Davey of ‘Signed and Designed’ in Chipping Camden, whose decorative ceramics were finding favour with buyers at the LAPADA Fair. Image: Auction Central News.

“It’s been good,” he said. “I do the Decorative Fair in Battersea, but this is the first time I’ve done LAPADA and I’ve sold a few things.” A similar response came from Gloucestershire decorative arts dealer Alison Davey of Signed and Designed in Chipping Camden. 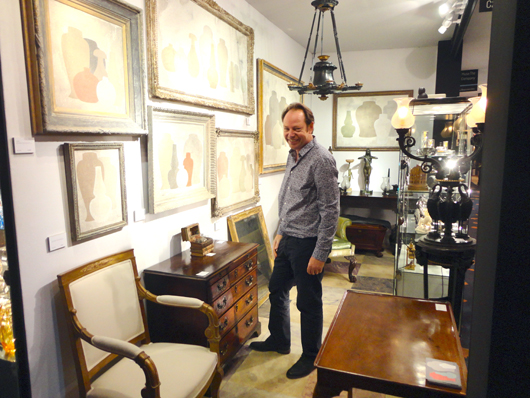 The overriding message from the LAPADA event was that until the recession lifts business is likely to be slow, however, much money there might be in leafy Mayfair.

Autumn is a fine time to be in the capital. After some fantasy antique shopping at the LAPADA Fair, Auction Central News grabbed a ‘Boris bike’ and cycled over to Hyde Park to check out the new Serpentine Sackler Pavilion by superstar architect Zaha Hadid, her first major commission in the UK.

The new Serpentine Sackler Pavilion in Hyde Park by superstar architect Zaha Hadid, her first major commission in the UK, which opened to the public this week. Image: Auction Central News.

It’s a very pretty building that sits beautifully in the surrounding landscape. Whether its bijou dimensions will be sufficient to accommodate the crowds that are sure to flock to it remains to be seen.

London’s many parks are now the go-to locations for the art trade. Hot on the heels of the LAPADA Fair in Berkeley Square Park comes the Autumn Decorative Fair in Battersea Park from Oct. 1-6. No sooner will that come down when Frieze and Frieze Masters, the two blockbuster events in the London fairs calendar, will go up in Regents Park. The fact that London can sustain so many fairs of this kind says something about the art market’s relative immunity from the broader economic downturn. However, this makes it all the more critical for dealers to source the right kind of material to show.

London-based specialist dealer in Indian works of art and textiles, Francesca Galloway, seems particularly adept at this. At the forthcoming Frieze Masters fair from Oct. 17-20 she will be offering a selection of Indian miniatures of uncommon rarity and quality. The works originate from “a princely collection” of 22 Mughal miniatures assembled by a nobleman from the collections of four of the most important collectors of Indian painting. Galloway will unveil a selection at Frieze Masters and then show the collection in its entirety at Asian Art week in London in November. Typical of the kind of work on offer is a Mughal miniature, circa 1570-80, showing a keeper trying to restrain an elephant. 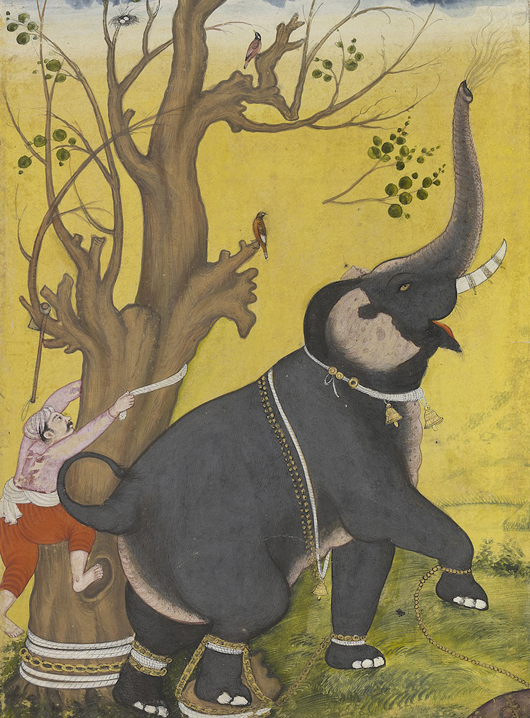 A Mughal miniature, circa 1570-80, showing a keeper trying to restrain an elephant, which will be on the stand of London specialist Indian works of art dealer Francesca Galloway at Frieze Masters, Oct. 17-20. Image courtesy of Francesca Galloway.

Also on the stand will be a 19th-century Mughal-style princely howdah or ceremonial seat from Northeast India, veneered with carved ivory and with silver mounts. 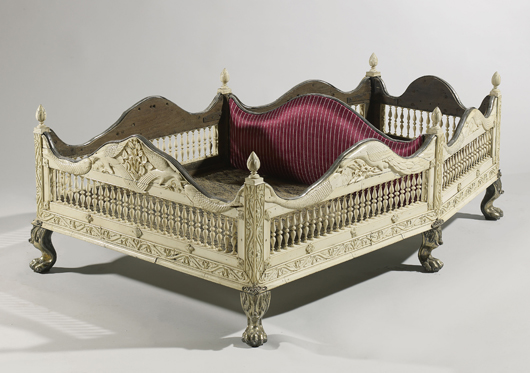 According to Galloway, “Whereas several years ago the  market for howdahs was predominantly  museum-based, more collectors of  Indian art than ever are keen to add howdahs to their collections of royal artifacts, and this piece is exceptionally rare.”

This coming week is Islamic week at the main London salerooms where even more fine Indian works of art will be up for sale. Auction Central News will be present to take the pulse of that burgeoning market. Meanwhile in the regions, Duke’s, the Dorchester auctioneers, will be offering a selection of vintage clothing and accessories on Oct. 15. The sale will include collectible handbags such as a navy blue Hermès Kelly bag with its original lock and key, estimated at £800-1,600 ($1,300-£2,500); 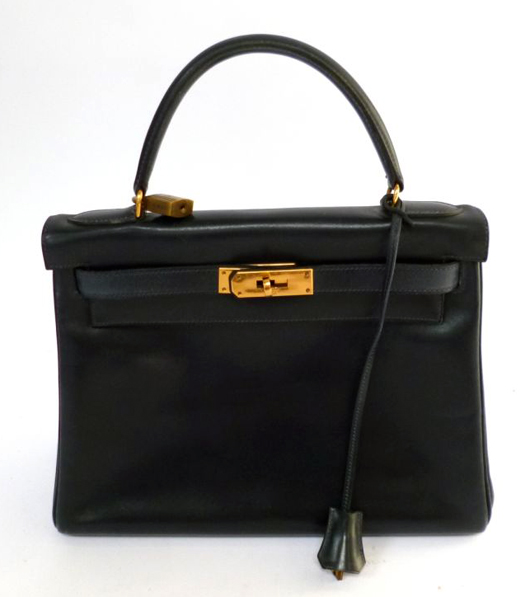 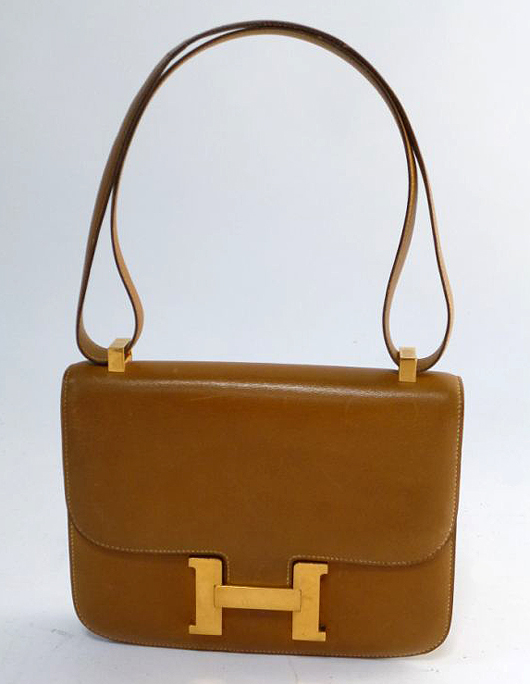 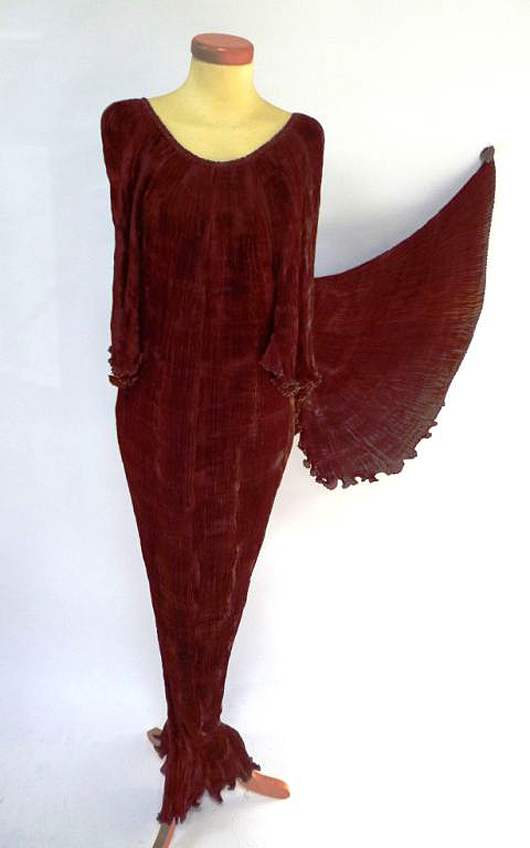 Finally, our main focus on London fairs is not intended to ignore interesting things happening on the regional circuit. So a brief word about the Esher Hall Antiques and Fine Art Fair taking place at Sandown Racecourse from Oct. 11-13. Described by its organizers as “an elegant, boutique-style vetted fair” and “a haven for interior decorators and collectors” you’ll find everything from Swedish furniture to fragments of fallen meteorites. A meteorite shower is not the sort of thing that a traditional barometer is capable of forecasting, or at any rate not the handsome Regency example being offered at the Esher Hall fair by Ottery Antiques, which is priced at £8,250 ($13,300).

Ottery Antiques have priced this Regency clock barometer at £8,250 ($13,300) and will offer it at Esher Hall Antiques and Fine Art Fair at Sandown Racecourse from Oct. 11-13. Image courtesy of Ottery Antiques. 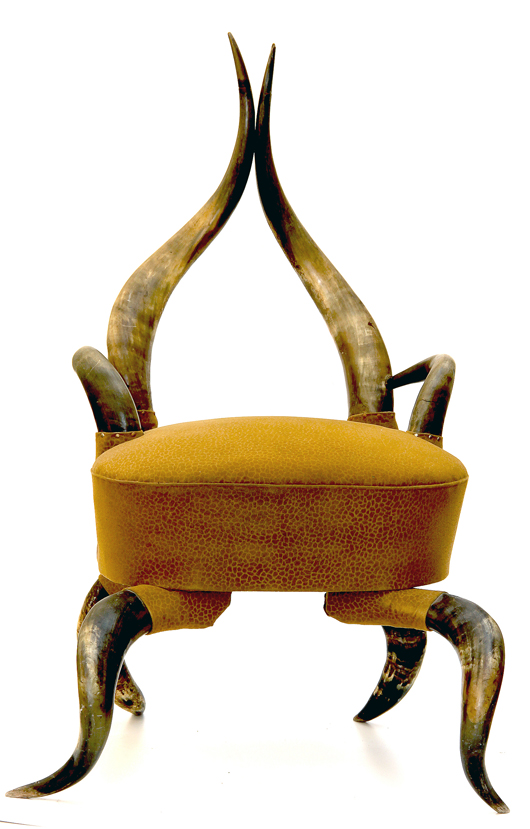 Not a chair to back into after a few drinks!

In our next installment toward the end of October we will be reporting on the prestigious Frieze Masters, so watch this space.