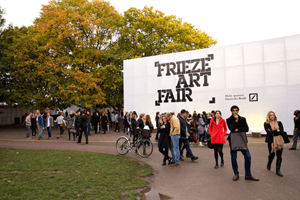 Frieze contemporary art fair to be held in Regents Park on Oct. 15-18 is set to dominate the London art scene over the next few weeks. Image courtesy of Frieze.

LONDON – Winter is approaching and Londoners are already bracing themselves for the big freeze. Or perhaps that should be the big Frieze. The capital’s hippest art fair, and its more sedate cousin Frieze Masters, are set to hoover up all the media attention in the coming weeks as contemporary art moves to the top of London’s cultural agenda. (Fig. 1) The process started a week ago when Frieze’s co-founders Matthew Slotover and Amanda Sharpe announced their decision to step down as the fairs’ directors to pursue new projects. 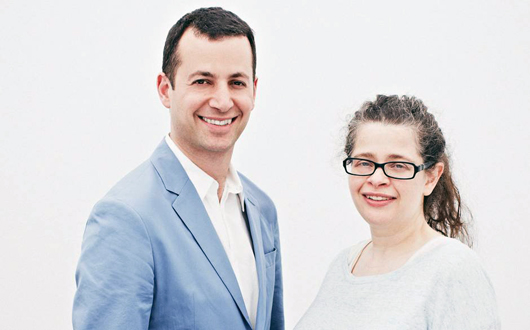 Matthew Slotover and Amanda Sharpe, co-founders of Frieze fair empire, who have announced that they will step down as the fair’s co-directors to pursue other projects. Image courtesy of Frieze.

They have handed over the reins to Victoria Siddall, current director of Frieze Masters, who will direct both Frieze London and Frieze New York.

Frieze is not the only London art fair to undergo a recent change of leadership. The LAPADA Fair — the annual fair organized by the UK’s leading antiques trade association — has just closed its 2014 edition in Berkeley Square and by all accounts it was another successful event. The association is now under the wing of its new CEO, Rebecca Davies, who took over from Sarah Percy-Davis who stood down in May. Percy-Davis is widely credited with having transformed the organization during her 10-year tenure. 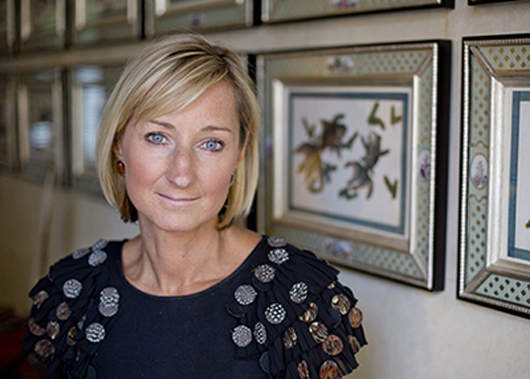 Sarah Percy-Davis, who recently stepped down as chief executive of the UK antiques trade association LAPADA, has started her own art market consultancy. Image courtesy of Sarah Percy-Davis.

She is now using those same skills to develop her own art market consultancy, offering business support and advice to a range of private and corporate clients, galleries, dealers, e-commerce companies and collectors. She continues to collaborate with LAPADA, however, and organized a hospitality event at this year’s fair for high-profile investors. “It was a huge success,” she told Auction Central News. “The group thoroughly enjoyed the fair and I’m delighted to report that around 20 significant purchases were made as a result of the initiative.”

The musical chairs has also extended to the British Antique Dealers’ Association, the other main trade body for UK dealers. Michael Cohen, director of Cohen & Cohen, the world’s leading dealers in export porcelain, was recently appointed the association’s new chairman. 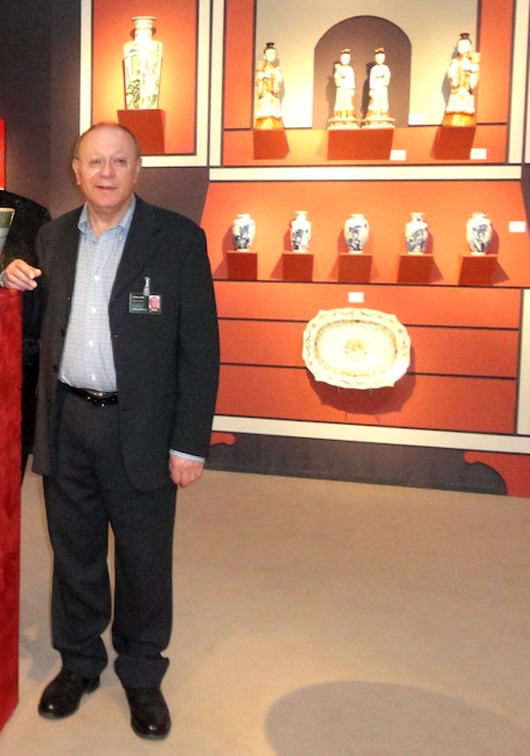 One of Cohen’s first initiatives was to introduce BADA buyer certificates, which will accompany works of art sold by BADA members. Innovations of this kind will be broadly welcomed by those in the industry who attach importance to issues of provenance and due diligence as a means of reassuring buyers.

Staying on questions of title and provenance, this month also saw the relaunch of Art Resolve, the cultural property dispute resolution service, has developed a new approach to settling title disputes over works of art and cultural and historic objects. Art Resolve’s directors, members and friends met recently at the ancient St. Olave’s Church in London to celebrate the relaunch of what is likely to become an important agency in an increasingly critical area of the market. 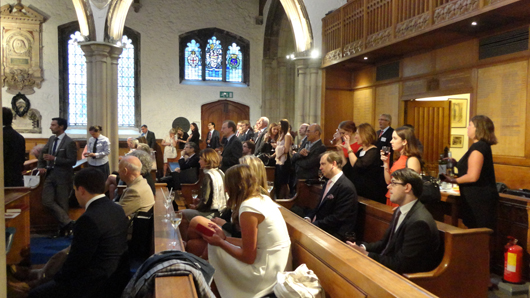 The Art Resolve service is under the chairmanship of Norman Palmer QC, CBE, one of the world’s leading experts in art and cultural property law. The professor gave one of his characteristically witty and erudite speeches to the assembled guests at the relaunch evening. 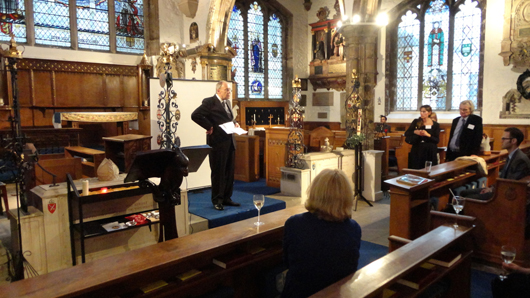 Sir Norman Palmer, CBE, addresses the faithful at the relaunch of Art Resolve at St. Olave’s Church in the City of London in September. Image Auction Central News.

Palmer has assembled an impressive roster of art market professionals, lawyers and experienced mediators to assist him in running the organization. Panel members include, among others, the specialist mediator Lord Strathcarron, barrister Malcolm Taylor, city solicitor Hetty Gleave, and Diana Cawdell, founder/director of Cawdell Douglas, one of the UK’s leading strategic communications organizations for the international art market. 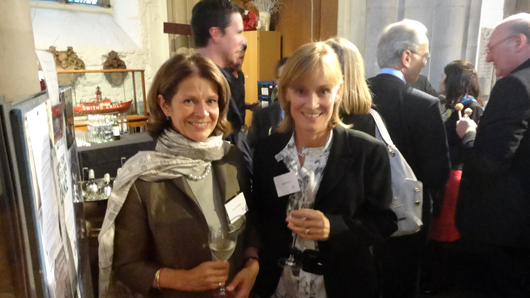 Gleave and Cawdell told Auction Central News that Art Resolve aims to fulfill an important role by mediating in what are often thorny issues of authenticity, title, family disputes and restitution. “We’re able to bring a less stressful, more confidential and more cost-effective approach to dispute resolution, offering the parties greater control than the conventional court process,” said Gleave. The note of cultured calm was subtly reinforced at the relaunch by lyric soprano Charlotte Derry and pianist Horacio Redondo Lopez, who together filled the famous medieval church of St. Olave’s with glorious music.

There was a palpable sense of business coming back to life in the capital this month as summer began to fade and early autumn set in. The darker evenings do bring opportunities for a little romance, though. Twenty years ago it would have been unheard of to witness Mallett, one of London’s oldest and most venerable antique furniture dealers, collaborating with a team of funky Vancouver-based postmodern designers. 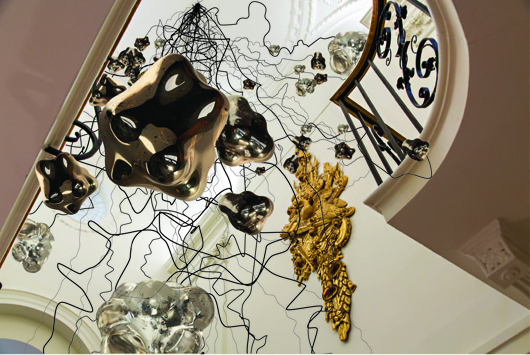 One of the striking interior lighting designs by Canadian designers Bocci, on view at Mallett at Ely House as part of London Design Festival. Image courtesy of Mallett.

But that is what happened in September when Mallett opened the doors of its suave Dover Street premises, Ely House, for an evening of drinks and discussion to show off their innovative partnership with Canadian architectural and interior design firm Bocci. The building looked spectacular from the street, as one of Bocci’s exterior light installations cascaded down from the windows of the upper floors over the building’s neoclassical facade. 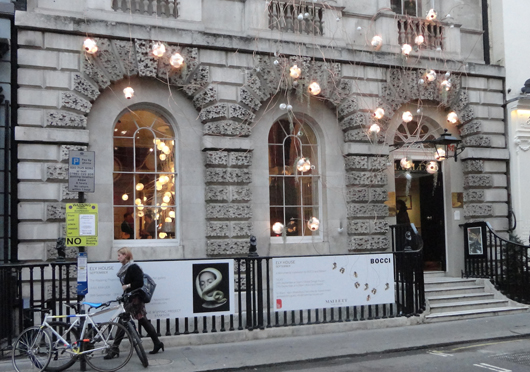 Scheduled to coincide with the London Design Festival, the evening offered an opportunity for a leisurely stroll around the sumptuous Georgian interiors of Ely House. The move to the “Bishop’s Palace,” as it has been known since the 1720s, seems to have helped Mallett, who have seen their business begin to recover over the past 12 months. 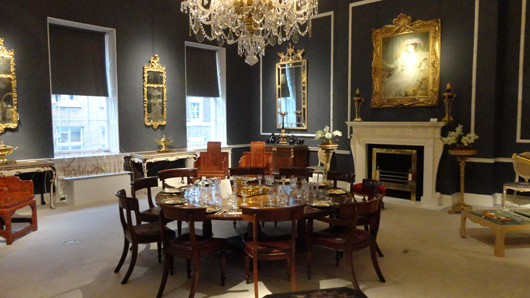 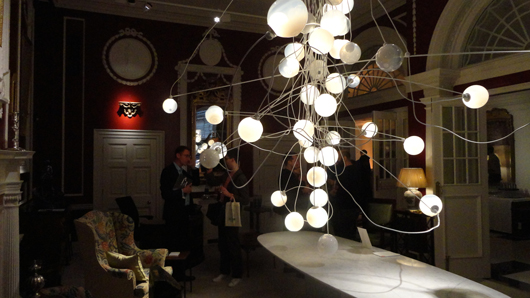 A chandelier by Bocci, part of the fantasy lighting display at Mallett’s Ely House premises as part of the London Design Festival. Image Auction Central News.

London antiquities dealer Charles Ede Ltd. has also recently announced an imminent move to new premises. The firm will be holding their inaugural exhibition at Three King’s Yard, Mayfair from Oct. 15 to Nov. 14, which will feature a range of important antiquities from the Greek, Roman and Egyptian periods. 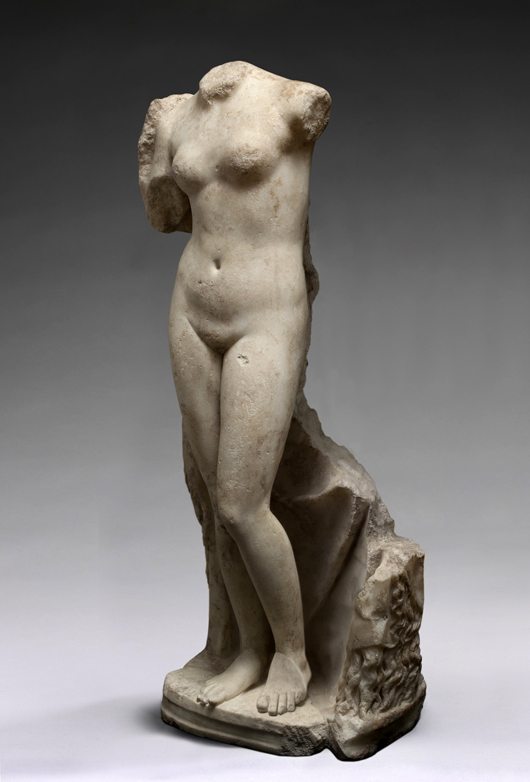 Antiquities have become a hugely controversial field in recent years as looted objects continue to make their way onto the international art market. However, Charles Ede’s managing director James Ede has been a key figure in pressing for best practice in the London antiquities trade through stringent approaches to provenance research on items offered for sale. We are told that the title of the company’s new exhibition, “A Flourishing Tradition,” seeks to reflect that ethos, referring to both the history of the gallery and the long tradition of antiquities collecting. However, given the current geopolitical turmoil that is bringing increasing quantities of illicit material onto the open market, one wonders whether dealing in antiquities will be able to “flourish” for much longer.

The state-of-the-art refurbishment of the new gallery aims to “reference the age of the Grand Tour whilst embracing a contemporary aesthetic.”