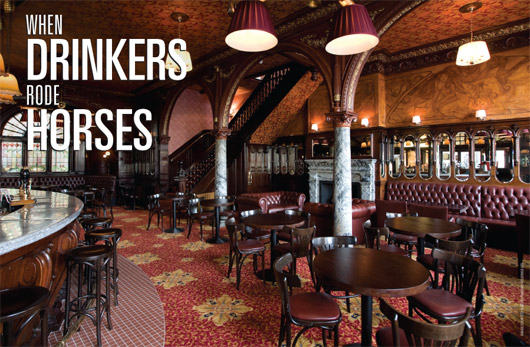 At that time, the establishment then known as the Warrington Hotel had adjoining stables for its customers’ convenience. Maybe that rider wanted to buy his horse a pint?

Whatever the case, The Warrington celebrates a grand drinking tradition dating back to 1859. Tucked away on a shady corner of London’s oh-so-trendy section of Maida Vale, The Warrington has a history as old as its neighborhood. The building first appeared on a map in 1863, but a developer may have built it in 1859 on what was once a pasture, later renting out the building.

“Warrington” may refer to Warrington, Lancashire, or possibly honors Sir Henry Booth, first Earl of Warrington (1651-1694), who was known for his support of the Church of England.

“The Warrington Hotel” is emblazoned in block letters on the top pediment of the stucco-finished brick building. This is a bit of a misnomer, because although it has many bedrooms on the top floor, there is no record of its having been a hotel. Two sculptural busts, one of which could be the Earl of Warrington, silently observe outdoor customers from the north side of the building.

“Gordon Ramsay was able to walk into the old building and see The Warrington’s former glory,” said Marriott. It took imagination, however. Ramsay, a celebrity chef and former customer, had to look beyond the pub’s blackened carpets and hazy windows to recognize its good architectural bones. Ten million dollars later, this landmark building has been polished into its former state and operational as a Gordon Ramsay Holdings Ltd. pub and restaurant.

Entering the ground floor pub is a jaw-dropping experience. It is a red/gold, carved, gilded, arched, mirrored, mahoganied, marble-topped extravagance. The crowning point of the room is the curved bar. Stretching from its carved mahogany base to its cool gray marble top, the back bar reaches ever higher, past the very angels of heaven to a mythical mural of elegant nudes zigzagged by chained hanging lamps and brass seashells.

If a city pub’s purpose during the 1800s “gin palace” times was, as pub expert Jane Peyton suggests, to transport working-class people into another world, The Warrington must have taken them to the moon. It’s hard to imagine a horse in there.

“Because the building has landmark status we couldn’t really touch anything. All we could do was to clean it up and give it a nice makeover,” said Marriott. “Anything that needed to be replaced had to be replaced with a replica.” The building was given new life by duplicating and replacing yards of red-patterned carpeting. Hanging alabaster lamps were specially made in Italy, and handsome leather seating was crafted. Its elaborate Art Nouveau stained-glass windows were carefully cleaned. The enormous marble fireplace was made ready for use. Years of dirt were removed from The Warrington’s complexly carved arches and column capitals, and its brass fittings were burnished to a new sheen. On the opposite side of the bar, the saloon room maintains its separate entrance.

Today the saloon room is just a more intimate bar that overflows into the informal outdoor seating on the north side. The frosted glass windows and circa 1912 textured wallpaper, repainted a deep burgundy color, are perfectly preserved. Marriott hopes to get the petite fireplace working for the winter season.

At the top of a brass-railed mahogany staircase and under the lovely canopy of an Art Nouveau glass skylight, is the entrance to the second floor Gordon Ramsay restaurant. This floor was originally divided into two billiard rooms, hence the name “The Billiard Room” for the small, private dining room. Lurking along the windows in the restaurant, but not active by daylight, is The Warrington’s official ghost.

“This used to be the bottle shop, where you got your takeaways from,” said Marriott.

WARRINGTON HOTEL IMAGERY click on any image for a slideshow

“Our managers have all said basically the same thing,” noted Marriott. “When we’re turning out the lights and locking up for the night, you just get a very unpleasant feeling. You know someone is watching you, but there’s no one there.” He went on to explain that while the Church of England owned The Warrington Hotel it was rumored to have been a brothel. “We think the ghost was probably a prostitute who had an unfortunate accident,” said Marriott.

Every owner of the Warrington has left his touch on the building. Evidence of renovations appears around 1900, in 1913, and then again in 1927-28. Copies of old photos brought to Marriott by customers show various incarnations of The Warrington. The building even survived the World War II bombing that hit neighboring properties. But miraculously none of the ostentatious details that make The Warrington magnificent were ever lost.

“We’re still looking for historic pictures and stories about The Warrington,” said Marriott, adding that he welcomes information at dominicmarriott@gordonramsay.com.

Anyone who finds history as filling as good food and ale will enjoy a visit to The Warrington. The pub and saloon room serve hot and cold food day and night, and feature a weekly “guest ale.” Located at 93 Warrington Crescent, it is easily accessible via the Maida Vale stop on the London Underground. Telephone 0207-592-7960 or visit www.gordonramsay.com.

WHAM-O: From Slingshots to Superballs