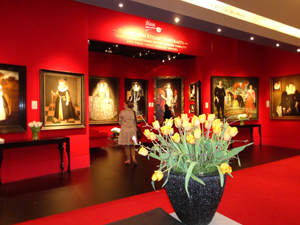 The TEFAF stand of London’s Weiss gallery who sold the four important Tudor portraits on the back wall during the opening hour of the fair. The full-length portrait of Henry VIII on the right, known as The Ditchley Henry VIII, sold at an asking price of £2.5 million ($3.9m). Image Auction Central News.

In 1641 English diarist John Evelyn visited Holland and reported that Dutch peasants “were so rich that they were looking for investments and often spent 2,000-3,000 florins for pictures.” Wandering around the European Fine Art Fair (TEFAF) in Maastricht last week it was clear that the Dutch peasants to whom Evelyn referred have long since been replaced by a rather more cosmopolitan clientèle with an even larger disposable income.

This year marked the 25th anniversary of the Maastricht Fair and the organisers had pulled out all the stops to create a reception foyer with the glitzy ambience of a five-star Dubai hotel. 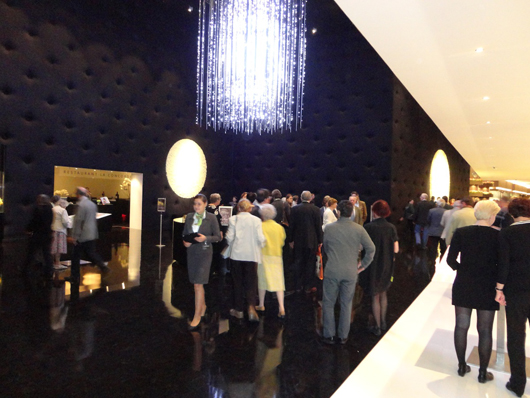 The European Fine Art Fair (TEFAF) in Maastricht celebrated its 25th anniversary this year. The entrance foyer provided a suitably chic welcome to the 72,000 people who flocked to the fair from 15-25 March. Image Auction Central News.

Ultimately, however, these events are judged not on the interior decor but on the volume of sales. By the end of the week many dealers were reporting buoyant business and a renewed confidence among buyers. What made this year’s fair markedly different to past years was the greater number of Asian visitors, reflecting the fact that China has finally overtaken America as the world’s largest market for art and antiques.

London Eye spoke to Catherine Weiss, a director of London’s Weiss gallery, dealers in Old Master portraits, who had sold four important English portraits from a private collection during the opening hour of the fair. The most notable of these was a full-length portrait of Henry VIII known as The Ditchley Henry VIII, for which they had been asking £2.5 million ($3.9 million). The gallery also sold three late 16th century portraits by Robert Peake, including a portrait of Catherine Carey, Countess of Nottingham, circa 1597, which went to an international buyer at around £2 million ($3.1 million) and two related pendant portraits at £350,000 ($560,000) and £650,000 ($1.03 million).

“Clients were in great form this year,” said Weiss. “They want to buy.” She also noted the new influx of Asian interest, proving that TEFAF’s promotion of the fair within China had paid off in visitor numbers if not yet in sales. “The Chinese visitors didn’t buy from us,” said Weiss, “but they were here in some numbers and expressed great enthusiasm for the English ancestral pictures, which bodes well for the future.”

Although Asian buyers were more conspicuous on many stands at this year’s fair, they remain slow to catch on to the rich appeal of Chinese export porcelain, the market for which, for now at least, remains predominantly North American. London-based Michael and Ewa Cohen are the world’s leading specialists in Chinese export porcelain and did an encouraging amount of business at this year’s fair. Their stand was once again brimful of superb examples of 18th century wares decoratively displayed thanks to the theatrical flair of their research colleague William Motley. When we visited their stand they spoke of steady sales throughout the week and reported serious interest in a rare and important Famille Rose bowl decorated with an early New York landscape subject 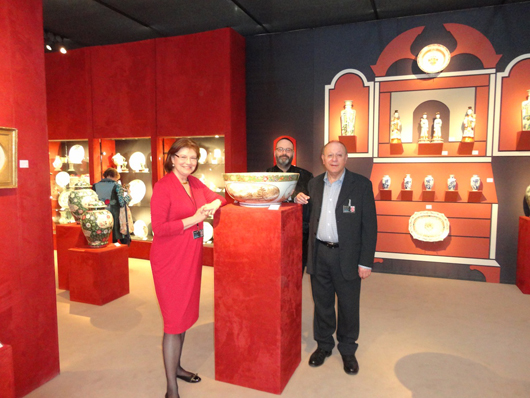 The TEFAF Fair grew from a core group of Old Master dealers who, 25 years ago, hatched a plan to turn Maastricht into the premier annual destination for museum-quality pictures. Despite having since expanded to accommodate sections devoted to modern and contemporary art and modern design, the Maastricht fair still derives much of its strength and appeal from the Old Master paintings market. It was thus not surprising to hear that Johnny van Haeften, one of the original founders of the fair and the doyen of the London Old Master trade, had sold pictures “in double figures” during the first three days of the fair. Meanwhile, silver dealers Koopman Rare Art generated welcome media coverage thanks to the sale of an important early 18th century silver inkstand by Paul de Lamerie for $5 million. 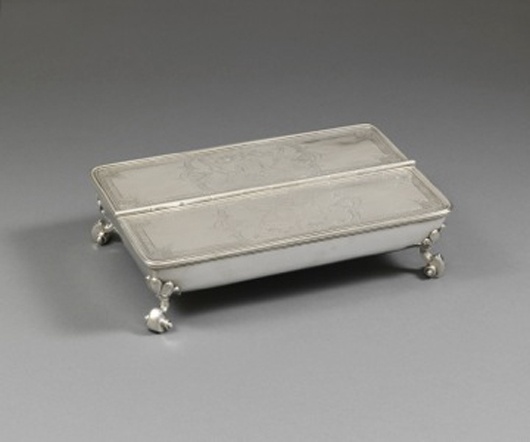 This important Huguenot silver inkstand by London maker Paul de Lamerie, formerly in the collection of British Prime Minister Robert Walpole, was one of the stars of the TEFAF Silver Jubilee fair in Maastricht in March. It was sold by Koopman Rare Art for $5m. Image courtesy of Koopman Rare Art and TEFAF.

The provenance connecting it to the first British Prime Minister Robert Walpole lent it added luster.

If bullish TEFAF sales were not sufficient to confirm a continuing market recovery across the board, the upbeat message from exhibitors at the 20th anniversary installment of the British Antique Dealers’ Association (BADA) Fair in London this month helped dispel any lingering doubts.

Visitors were flocking around the stand of decorative arts dealer Sylvia Powell for whom the international fairs circuit now provides the backbone of her business (Powell and her son Mark do the BADA, LAPADA and Olympia fairs in London and the Chicago and Palm Beach fairs in the United States). Powell had sold a number of ceramic works by Picasso and Jean Cocteau when we visited, and a blue glass Cyclops sculpture by Salvador Dali at £9,000 ($14,390). 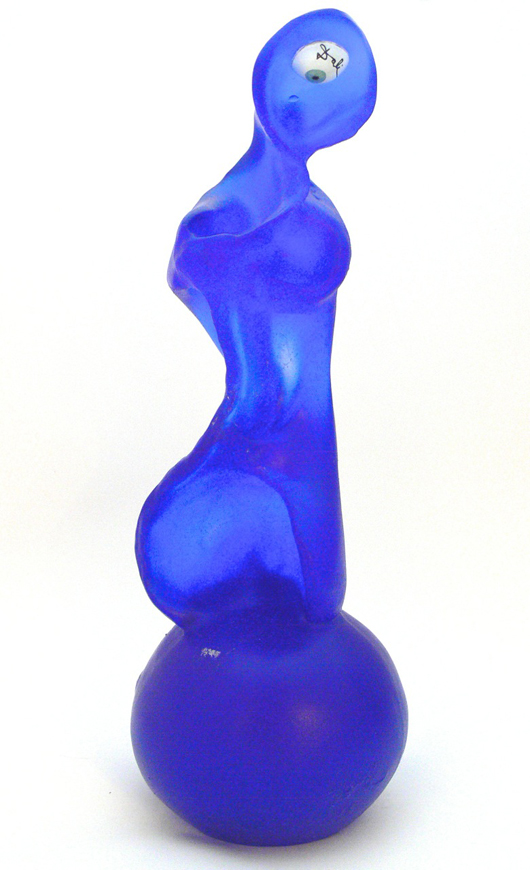 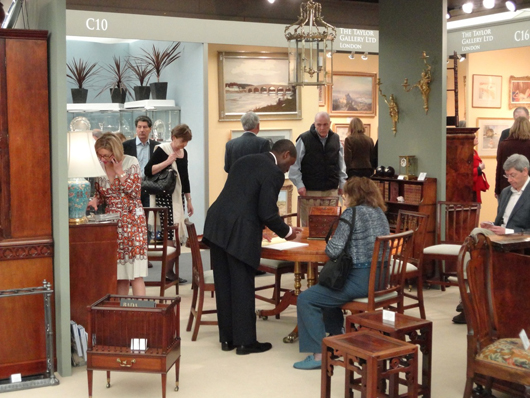 who is also a star of the BBC’s Antiques Roadshow, had thrown a prefair party for invited clients at his Edenbridge gallery a few days before the BADA event. “Business was incredible,” he said, adding, “business is better now than it has been for years.”

Asked why the market was so buoyant at retail level given the recession, he told us his clients were looking for “tangible assets as a long-term store of value.” Those assets included a set of eight Hepplewhite period dining chairs, which Cato sold to a Belgian collector, and a pair of late 18th century Chinese hardwood tables, which went to a New York buyer.

The Gold Award for “Object of the BADA Fair” was won by furniture dealer Frank Partridge, who was showing a rare English cabinet, circa 1680, decorated with pieta dura panels. 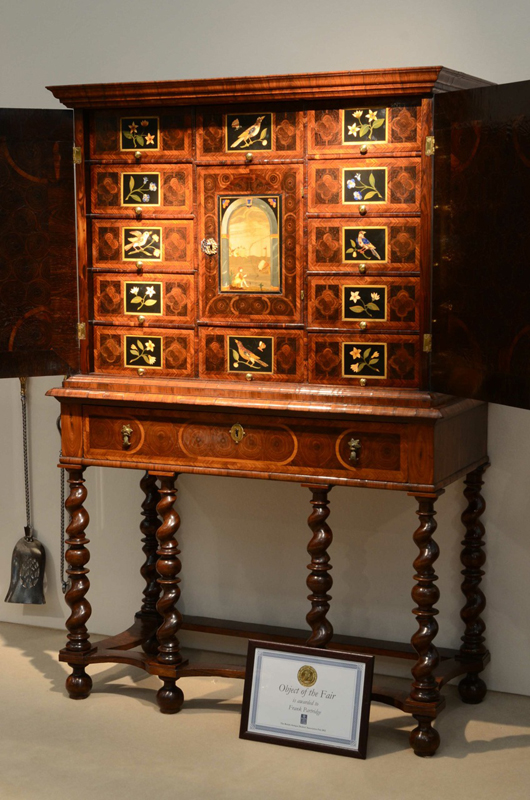 A rare late seventeenth-century English cabinet decorated with pieta dura panels on the stand of London furniture dealer Frank Partridge at the British Antique Dealers’ Association Fair in Chelsea in March. Priced at £285,000 ($455,630), it was awarded the Gold Medal for ‘Object of the Fair’. Image courtesy Frank Partridge and BADA Fair.

Although it remained unsold at £285,000 ($455,630), Partridge expressed confidence that a buyer would soon be found. Asked whether he might have had a better chance of selling it at TEFAF, Partridge shrugged and shook his head.

Away from the fairs circuit, one of the most interesting pieces of news this month was the announcement that Mallett, the once illustrious firm of London furniture dealers, is back in profit, albeit only marginally. The firm, which recently moved to new premises in London’s fashionable Mayfair district, returned a profit before tax of £0.5 million ($800,000), compared to a loss of £1.4 million in 2010. The profit, however, includes the proceeds of the sale of the lease on the firm’s former premises in New Bond Street, London. Market analysts will be watching with interest to see whether Mallett’s decision to withhold share dividends for the foreseeable future will deliver a much-needed upturn in business.

Looking ahead to the spring season, forthcoming attractions include the first ever Cotswold Art and Antiques Dealers Association (CADA) Fair to be held from 20-22 April at the historic Blenheim Palace in Oxfordshire, home to the Duke and Duchess of Marlborough. Noble country house locations are becoming a notable aspect of the UK fairs scene as cash-strapped owners of ancestral piles seek new revenue streams. Antiques fairs provide a picturesque setting for exhibitors to show off their wares and the house’s aristocratic owners raise much-needed cash. It is hard to imagine a more appropriate object to take to the Blenheim fair than the lady’s silver-gilt traveling dressing table service provenanced to the family of Sir Winston Churchill, to be offered by Hamptons Antiques. 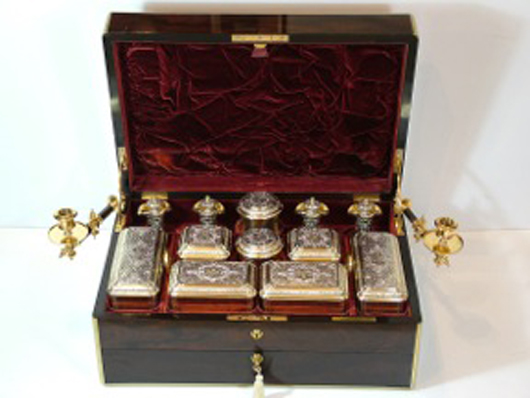 It was commissioned from London silversmiths Garrard & Co. in 1844 for Jane, Duchess of Marlborough and is decorated with the Spencer-Churchill family coat of arms.

Finally, the next few weeks will see country-wide celebrations of HM The Queen’s Diamond Jubilee. Not surprisingly, this is already providing an opportunity to brand exhibitions with a vaguely patriotic theme, even if the exhibition content is only tenuously related to Her Majesty. The career of the late and much-admired British painter and printmaker John Piper (1903-1992) spanned a good deal of Elizabeth’s reign. A new exhibition of Piper’s rarely seen work for British churches goes on view at Dorchester Abbey, Dorchester-on-Thames, Oxfordshire from April 21 to June 10.

The exhibition will reveal Piper’s extraordinary versatility across a wide range of media from paintings, stained glass and tapestries to drawings and designs for ecclesiastical vestments.

The works have been drawn from many public and private collections and will include a series of paintings of bomb-damaged churches executed by Piper while working as an official war artist.

Piper’s love of British churches will gain a new and somewhat poignant resonance in the light of the increasing incidences of thefts from churches over the past few years, driven mainly by the rise of scrap metal prices. Piper’s work will recall happier times when Britain’s ancient ecclesiastical heritage was treated with the love and respect it deserves.