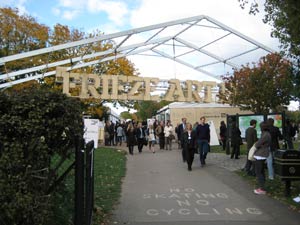 Meanwhile, the contemporary art auctions at Sotheby’s (Friday evening) and Christie’s (Sunday evening) offered the first reliable evidence that the crisis on the financial markets was finally filtering through to the art market. The combined totals from the two events came in at barely half the lower estimates, although Christie’s did manage to sell their Lucian Freud portrait of Francis Bacon – arguably the most prestigious lot of the week – for £5,417,250 ($9,404,344) albeit at the lower end of the presale estimate of £5,000,000 to £7,000,000.

Under normal circumstances it is almost impossible to get a clear sense of how much business is done at Frieze, since the fair’s organizers do not release sales figures. However, this year, clearly prompted by the credit crunch and the need to protect their investment in what is itself clearly a lucrative business venture, the fair’s organizers Matthew Slotover and Amanda Sharp broke with recent protocol and released an extensive press release quoting encouraging sales by most of the participating galleries.

Touring the fair on Friday and Saturday, it became clear that many dealers were either reluctant to divulge what they had sold or, like London’s White Cube, declared themselves too busy to talk. Most of the serious business at Frieze is done on the opening hours of the first day, and if that is slow, it traditionally sets the pattern for the fair. The general feeling this year was that activity was slower than last year at the height of the bull market. However, Tomio Toyama Gallery of Tokyo said, “It has been worthwhile, and we have sold a few pieces.”

Sunitha Kumar Emmart of Galleryske in Bangalore said, “We have had a lot of interest and are very optimistic that it will be a good fair.” On Friday her stand was buzzing, with visitors drawn to a large automated work by Sudarshan Shetty (who also showed in this year’s expanded sculpture park). The gallery had already sold a bindi painting by leading Indian artist Bharti Kher. After the fair ended, François Chantala, director of Thomas Dane Gallery, said, ‘We have done very well. Everything has gone, but our sales have been based on trust and relationships rather than hysteria, and this has made for a more pleasant fair.”

Akio Aoki of first-time exhibitor Vermelho, commented, “It has been great. We were anxious about the economic situation but then we had a lovely surprise. We’ve sold at least 70 percent of our stand, so we’re delighted.”

Arguably the greatest energy at this year’s Frieze was generated by more anarchic interventions, such as that adopted by Buenos Aires gallery Appetite, the first Argentinean gallery to be invited to Frieze. For the duration of the fair the Appetite booth was occupied by Diego de Aduriz and associates, who filled the space with random detritus, continuously rearranging the rubbish throughout the duration of the fair as an ongoing performance piece.

“It was a radical decision to bring this project to Frieze,” said Appetite’s Daniela Luna “We feel we are making history … We put ourselves to the experiment, some of it was life changing; some were crossing lines that were not meant to be crossed. But I guess this is what happens when you’re dealing with the real thing and not just a pose.”

Over at Zoo in Mayfair, disgruntled press and VIPs waited in long snaking queues to be granted access to the Friday opening’s champagne reception. Once inside, it was clear that business was being done, albeit at more accessible price levels to those at Frieze. Raphaelle Bischoff of London dealers Bischoff/Weiss had already sold a number of works by British painter Maya Hewitt, including a large four-panel work at £20,000. “I know that by the end of today I will have sold half a dozen more of the smaller paintings at £550 each,” said Ms. Bischoff.

Petra Rinck of the recently opened Petra Rinck Galerie in Düsseldorf, Germany was showing at Zoo for the first time. “I’ve heard that the bigger collectors from the U.S. are not coming,” she said. “But it’s nice to be here, and it will certainly be a worthwhile event for us as we are a young gallery keen to develop our contacts and collector base.”

By the end of the first day, Tot Taylor of Riflemaker had already sold a wax-based portrait of Barack Obama by Jose Maria Cano at £35,000. He also had sold several more pieces while setting up his stand on the previous evening. “We sell at the level up to around £150,000,” said Taylor, “so our collectors are still buying. We’re not here for the fast buck. We work to develop our artists over time, and we’re in it for the long game.”

There was a time when Zoo was seen as “the other art fair” after Frieze, but that dubious title has now passed to the Scope art fair, which this year had set up at Lord’s Cricket Ground on the west side of Regent’s Park, thirty minutes walk from Frieze. On Sunday the atmosphere was positively funereal. Dealers were bemoaning the poor organization. “They promised courtesy cars to ferry people from Frieze to us, but it just never happened,” said one London dealer who asked to remain anonymous. It was a sentiment echoed by several other dealers.

“It has been much quieter than expected,” said Constance Gounod of Saatchi Online. “We’ve seen some French, Italians and Germans, but very few Americans this year.” Nevertheless, some business was being done. Gounod pointed to two works by 23-year-old Poppy Jones, still a student at the Royal College of Art, which had sold at £700 each. Elsewhere, Antonella Palladino of Italian gallery Warehouse had sold a large abstract lambda print by Italian duo ‘Tu M’ for £3,000, while London dealers Madder 139 had seen feverish interest in a series of subtle works in pencil by British artist Paul Chiappe. “We’ve sold a number of Paul’s pieces at around £4,000 each to a major British institution and have a further 30 or 40 names wanting to buy Paul’s work,” said gallery owner Debbie Carslaw. She had also seen a lot of interest in work by talented British sculptor Rachel Thorlby.

Finally, underscoring the burgeoning interest in Chinese contemporary art, China Square gallery of New York and Beijing had sold a striking copper-plated Fiberglas figure sculpture titled Ode to Motherland No.7 by Cai Zhisong at U.S. $55,000; and a monumental oil-on-canvas portrait from the ‘2005 Chronicle  of Chinese Mining’ series by Xu Weixin, for US $55,000. Meanwhile, on the stand of Amsterdam dealer Willem Kerseboom, a large and characteristically lurid work from the stylized ‘Chinese Portrait Series’ by Feng Zhenjie – one of the artists currently on show at Charles Saatchi’s new London gallery – had sold for £125,000. 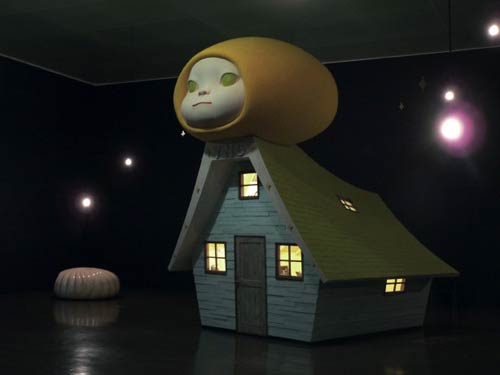 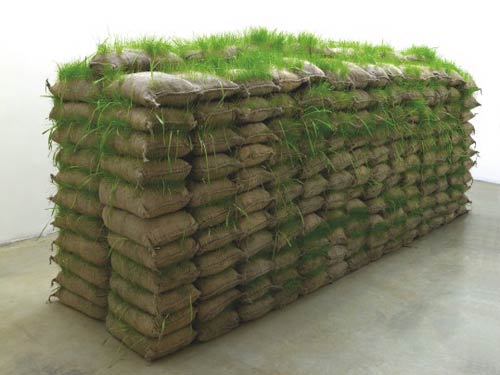 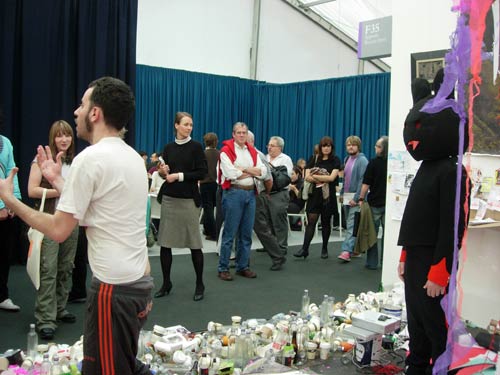 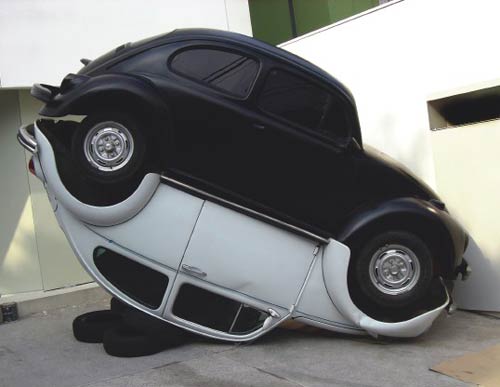 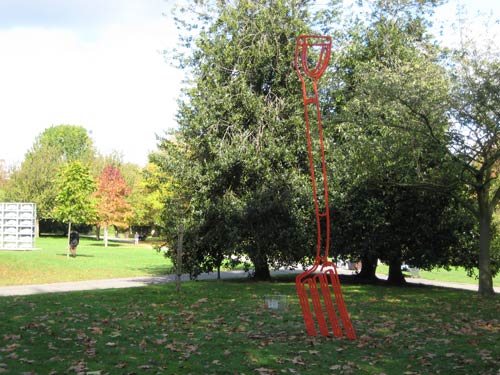 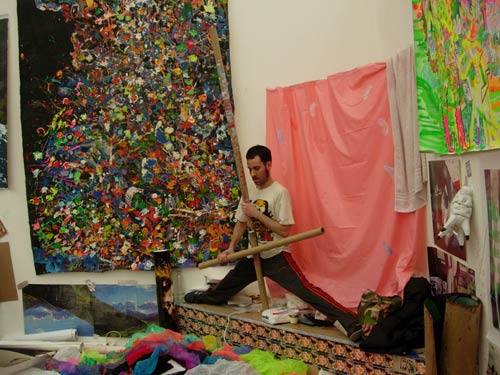 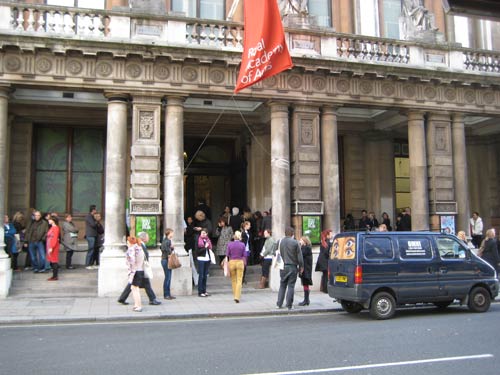 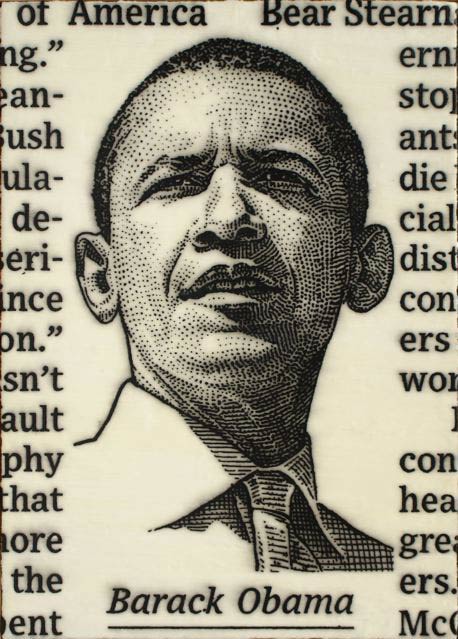 Barack Obama by Jose Maria Cano, on the stand of Riflemaker at the Zoo fair. Image courtesy Riflemaker.