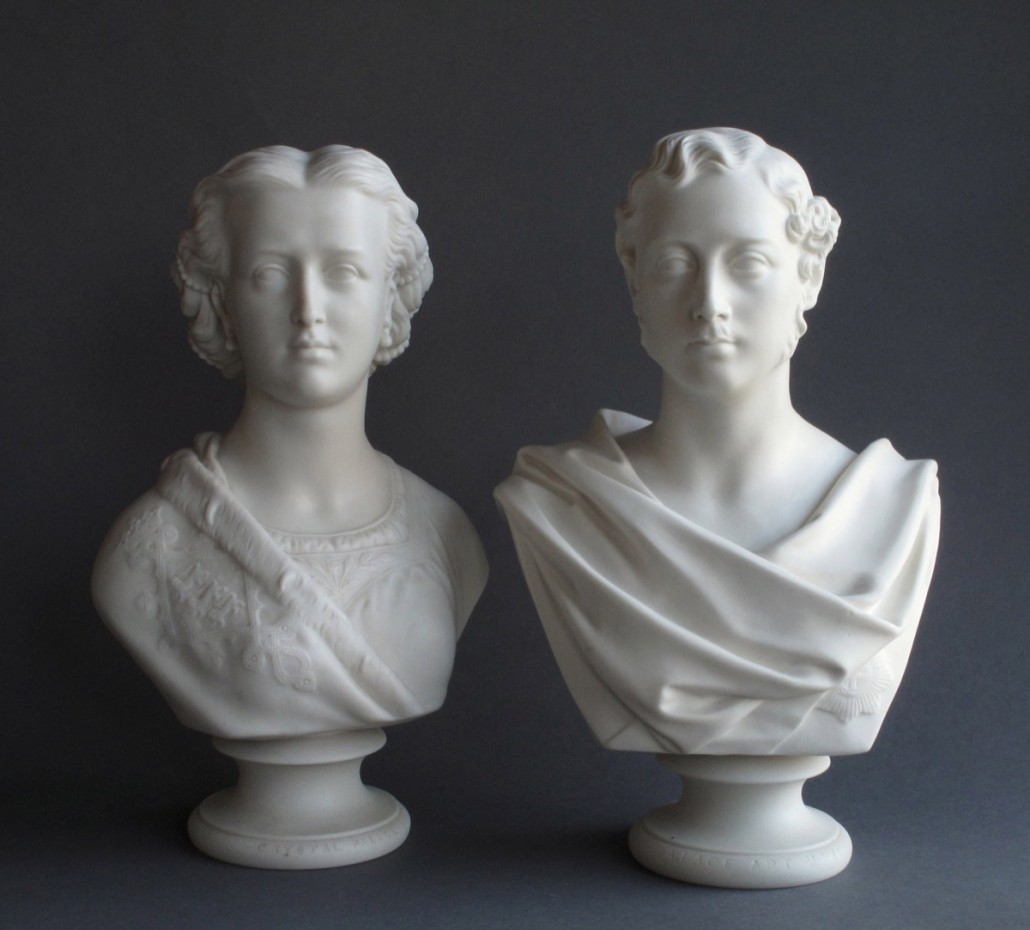 LONDON – Those of us who live in the UK have all heard of the so-called postcode lottery, but the People’s Postcode Lottery was a new one on me. If I’ve understood it correctly, every month all players in one postcode area share at least £2 million if that area is drawn.

Sounds good, but I’ve got a better idea. Instead of offering cash prizes, how about organizers commissioning living British artists to produce works of art – paintings, ceramics, sculpture, furniture and so on – who are paid for their labors by advance sales of lottery tickets.

Prior to the draw, the prizes go on public exhibition, culminating in a grand finale evening when the winners’ names are pulled out of the hat.

There are several winners. First, for the outlay of a few pounds, contestants stand to win valuable and desirable works of art that they might otherwise never have stood a chance of affording.

Second, for contemporary artists often struggling to make a living, here is the chance for them to show their capabilities, without the uncertainty that they might never sell what they have made.

Profits from each draw could go to good causes, although it would be good if some of the cash could enhance the buying power of the country’s financially stretched museums and art galleries.

The scheme would also produce the antiques of the future. After all, every famous name in today’s antiques world was once a living contemporary artist himself. His (or her) customers were simply far-sighted and imaginative collectors who recognized, and, more importantly could afford, quality and genius when they saw it.

Sadly, I can claim no credit for the idea, for it is far from new. Lotteries with works of art as prizes were popular throughout Europe until the early 19th century. They ceased in this country following an Act of Parliament in 1826 outlawing lotteries of any kind. However, it was not long before the idea was revived, using the term “Art Union” to disguise the truth.

By the 1840s, most major cities boasted an art union to educate the masses in an appreciation of the finer things in life. By 1847, the proceeds of the lottery movement were £17,871.

The period in which art unions boomed coincided with a dramatic shift in the spread of wealth and a change in patronage of the arts. Previously, it was only the landed classes who commissioned and collected works of art – the old money. The rapid and extensive growth of this country’s manufacturing base during the Industrial Revolution created a great deal more wealth and a whole new set of patrons.

Newly rich industrialists and businessmen soon began to look for ways to enjoy their wealth. They built large townhouses that needed furnishing but without the sophistication and knowledge of the upper classes, whose homes were furnished with old masters and fine antique furniture, this new money turned to the work of living artists.

Painters such as William Powell Frith and John Everett Millais; furniture makers like Gillows of Lancaster and porcelain manufacturers such as Minton and Spode saw demand for their products, and the prices they could ask for them, multiply. 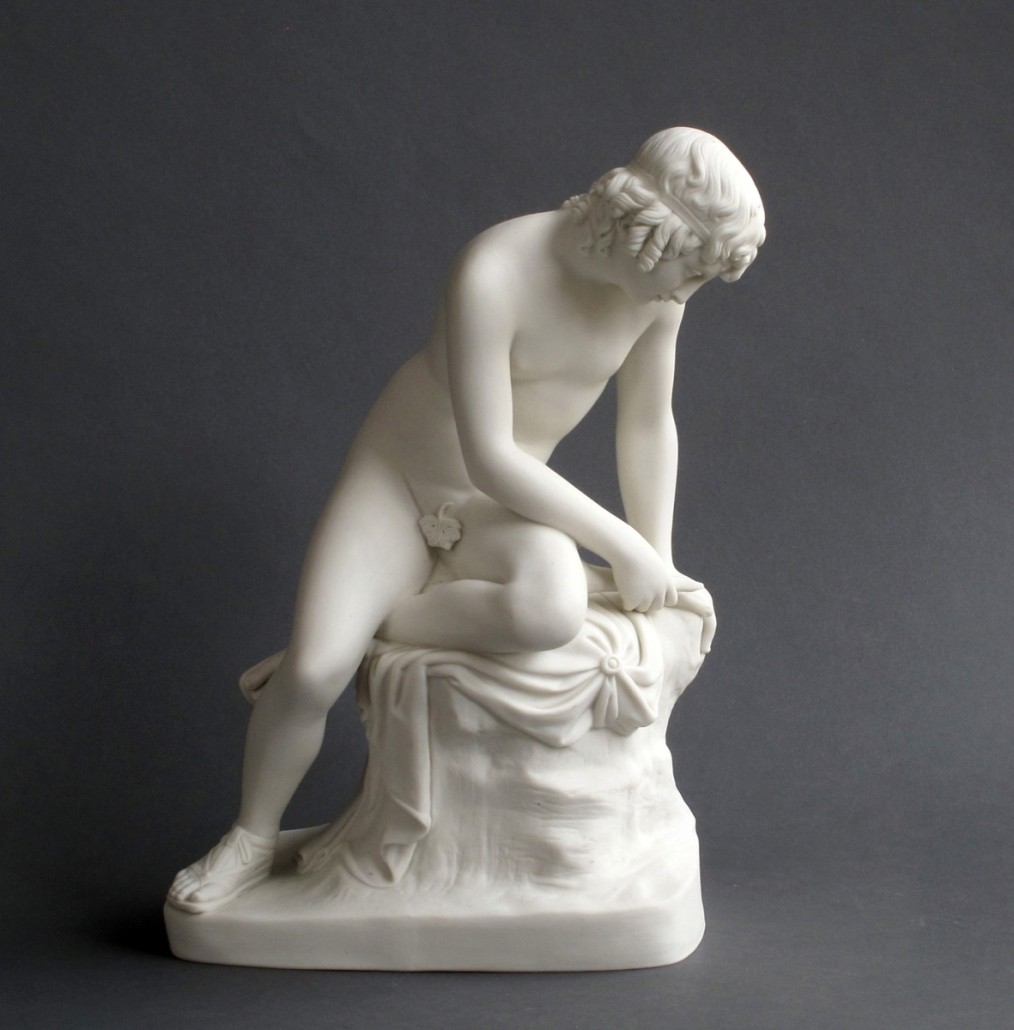 The art unions became equally important patrons of living artists and they saw themselves as vehicles for educating this new breed of collectors and connoisseurs. The idea that a lucky lottery subscriber could win a valuable work of art for a guinea, usually the price of a ticket, meant the potential audience was huge.

One contemporary commentator said there were basically two classes of person who bought art union lottery tickets. “The first consists of those who, although, possessed of taste, are not wealthy; the other are those of ample means, but who, from various causes, and especially from want of having their attention drawn directly and frequently to the subject have hitherto evinced little interest in the progress of the arts and little taste for their productions.”

The art unions played heavily on this ignorance and the general desire among the growing middle class to acquire “culture,” while the element of luck and chance afforded by the lottery principle added greatly to their success. Easily the largest was the Art Union of London, founded in 1837, which employed a network of agents in every large town and city.

In a clever marketing ploy, the London union subsequently decided to give every subscriber a free presentation engraving of a painting by a leading contemporary artist. The response was immediate and huge numbers of tickets were sold. The idea was so successful, in fact, that it almost closed art unions down. 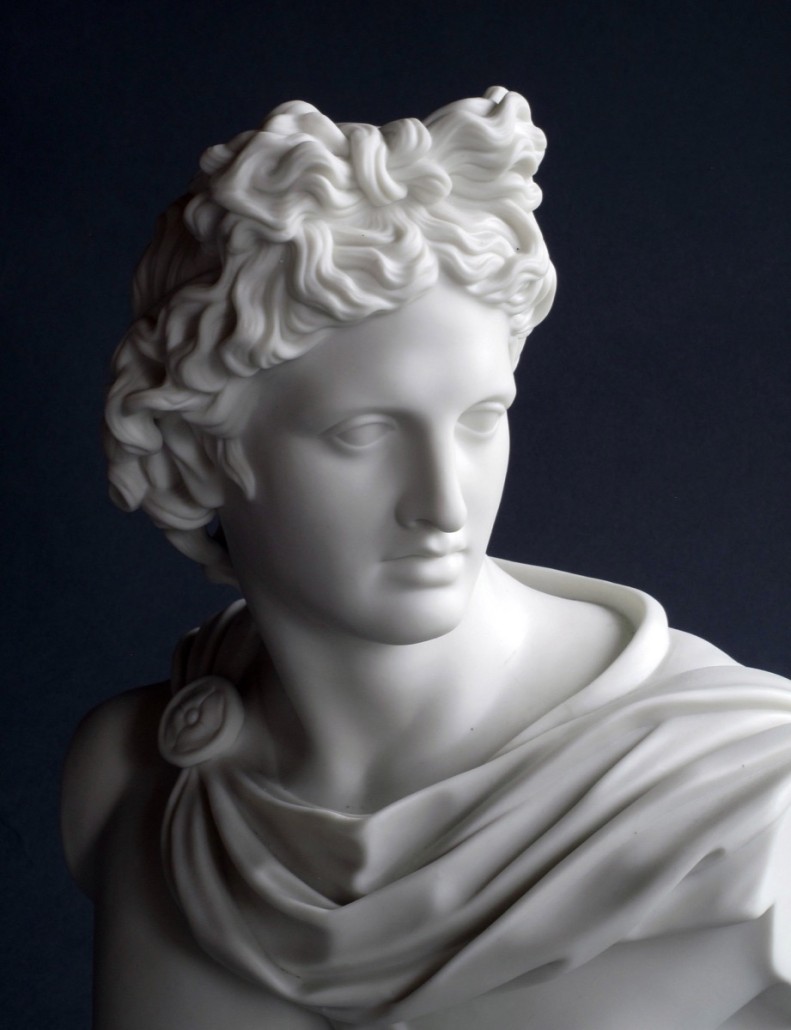 A Parian bust of Apollo Belvedere, sculpted by C. Delpech after the classical sculpture of the same name, and commissioned by the Art Union of London in 1861.

Eager to keep up with the pace set by the London union, those in other cities also took on agents to cover wider areas and began to produce free presentation engravings of their own. The result was a market flooded with cheap prints to the point where established print sellers and publishers were almost forced out of business.

They retaliated by pointing out that lotteries had been banned by statute. The embarrassed government, whose Prime Minister Sir Robert Peel was himself a subscriber, was forced to pass the Art Union Act of 1846, putting the unions outside lottery law jurisdiction.

Suitably encouraged, the London Art Union embarked on another venture, intended to boost the flagging fortunes of the artists who designed and engraved medals.

A specially commissioned series of medals would be given as prizes in annual ballots and would depict leading British artists and architects at work. The first showed sculptor Sir Francis Chantrey, which was executed by William Wyon RA, chief engraver to the Royal Mint.

Another area of interest for today’s collectors of art union memorabilia is sculpture. Small statuettes in bronze, reduced copies of larger works, were offered as prizes by the London union in 1840-41, but they proved too expensive to be continued.

At around the same time, experiments were being conducted in the Staffordshire Potteries with a type of white “statuary porcelain” which, when fired, resembled the pure white marble found on the Greek island of Paros. It was called Parian and its success, together with that of a machine that could copy a full-size sculpture in miniature, gave a new impetus to art unions’ interest in the medium.

For a fraction of the cost of bronze, Staffordshire manufactories, notably Copeland and Garrett and Minton, produced dozens of Parian copies of the work of leading contemporary sculptors, all of which were offered as lottery prizes.

The first was John Gibson’s Narcissus, of which 50 examples were given away in 1846. Thereafter, the London Art Union organized national competitions among sculptors for full-size marble figures or groups with a first prize of £500. The winning work was copied in reduced form in Parian and given as prizes in the lottery.

Thus, the London union not only raised awareness of art and new talent among its subscribers, it also patronized and encouraged sculptors to rise to the challenge of producing innumerable original works of art.

Provincial unions again followed London’s lead, although by and large, Parian busts and statuettes were simply bought in bulk from the various suppliers, rather than new pieces being commissioned. Records show that in 1849, Manchester Art Union wrote to Copeland and Garrett and Minton asking for examples of what each firm had to offer as lottery prizes. Total expenditure was limited to £100. 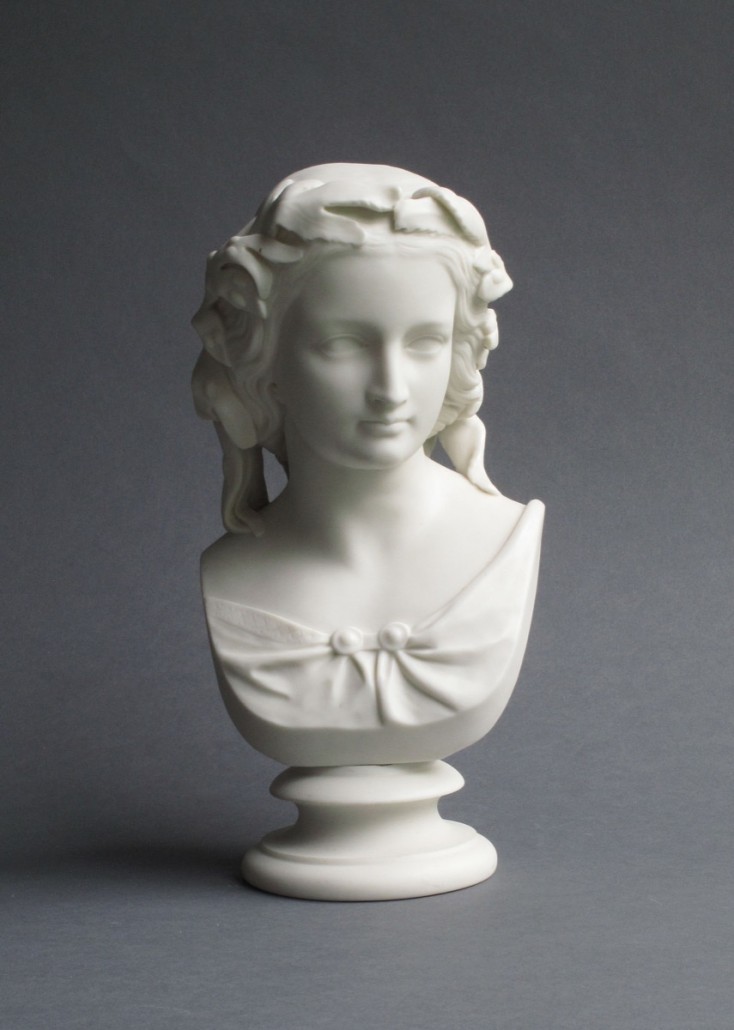 Copeland sent “on approval” a statuette of Sabrina and a bust of Dr. Dalton. The former was chosen and 10 copies were ordered, a move that was advertised widely in Manchester newspapers, advising potential subscribers of “this novel attraction.”

The rival Liverpool Art Union went one better and commissioned Copeland and Garrett to produce a Parian figure of Lady Godiva after the original by Liverpool sculptor John P. McBride. Twenty-five copies were awarded as prizes in the 1850 ballot.

Another major consumer of Parian figures and busts as prizes was the Crystal Palace Art Union. This is not surprising considering it was founded in 1858 by Thomas Battam, formerly director of art work at Copeland and Garrett and widely regarded as the man responsible for the introduction of Parian into commercial production. The result today is that one in four Parian figures found bears the Crystal Palace inscription. 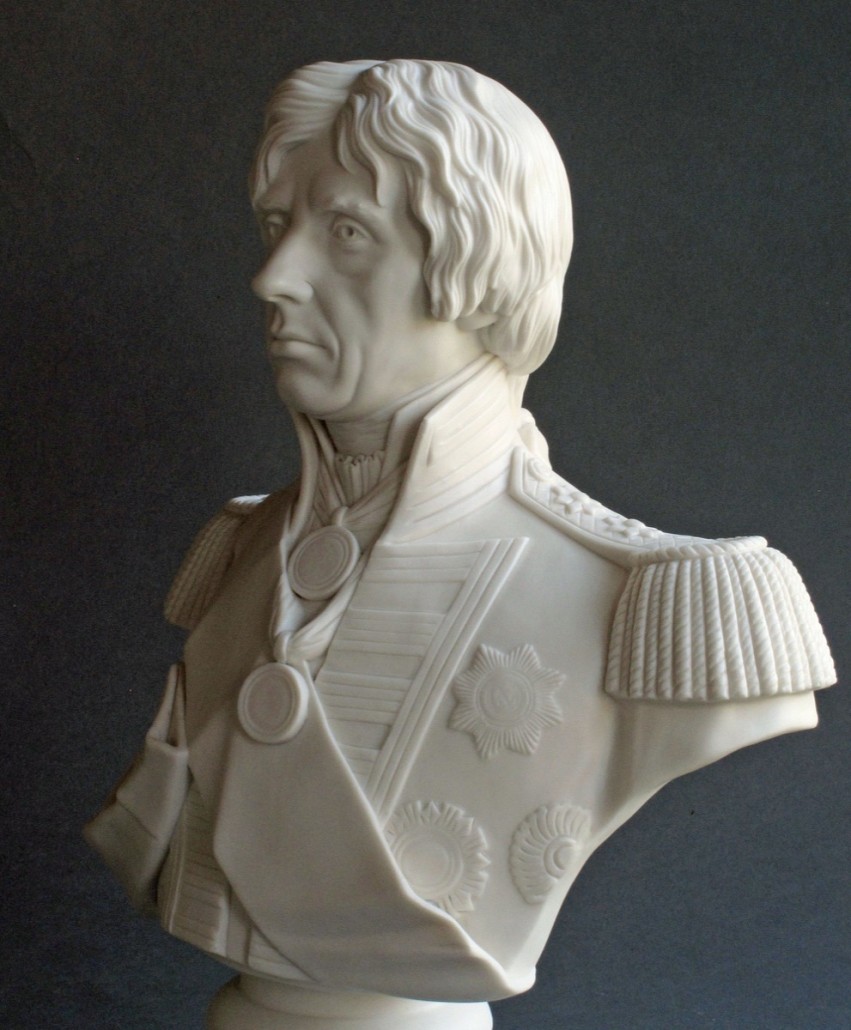 The end for art unions came in the 1890s, and it was their own fault. They failed to change with the times and continued to offer the same kind of prizes as they did when the movement started. And then came the draw of football matches and they had a lottery of their own: the football pools.

Wiltshire-based Drove House Antiques will be showing a selection of Parian, much of it produced for the art unions, at the Antiques for Everyone Winter Fair at the National Exhibition Centre Birmingham, which runs from Nov. 19-22. Admission is £15 (£12 in advance) including parking. Opening times are Thursday-Saturday 11am-6pm, Sunday 11 a.m.-5 p.m. For more information: www.antiquesforeveryone.co.uk.

Document signed by Napoleon to be sold by Alderfer Auction Dec. 9