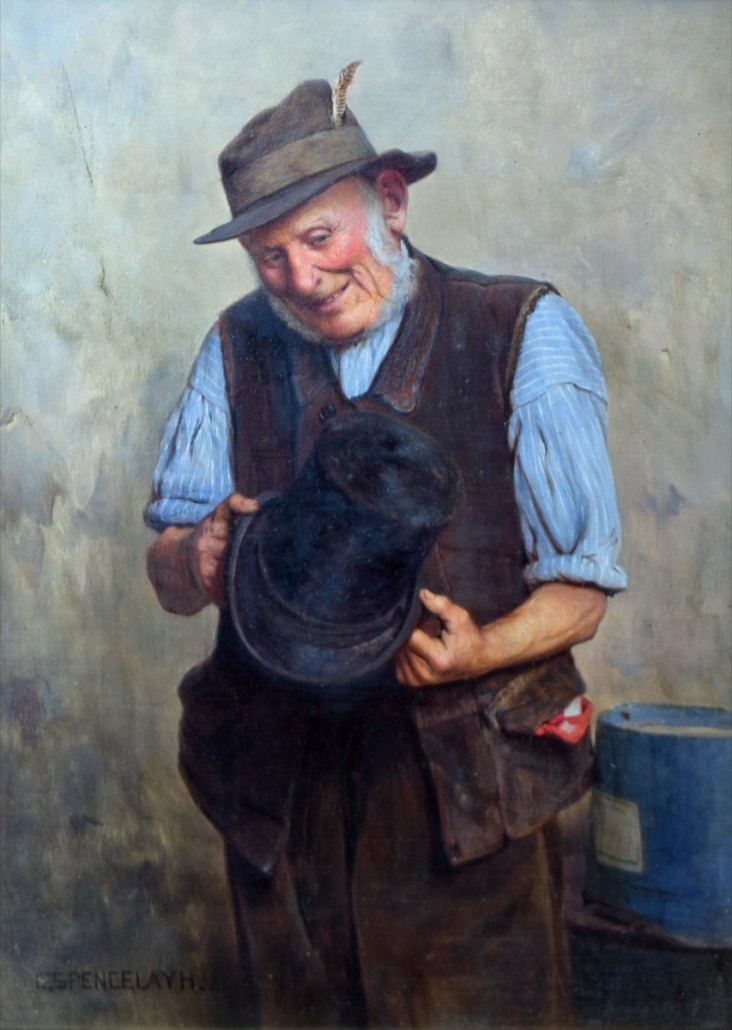 ‘Antiques,’ an oil on board by Charles Spencelayh, estimated at £20,000-30,000. Photo Peter Wilson auctioneers

LONDON – When a painting sells for a world record £280,000, it’s time to take notice. When you learn that the artist painted it while he was living and working under he patronage of a rich cotton merchant, you just have to learn more about the man whose name is spelled in such a strange way.

Charles Spencelayh was, until relatively recently, a little-known painter, unlike his pictures of old men rummaging in junk shops and at jumble sales. Without the financial backing and support from the Manchester businessman who discovered him, even they might have been destined to eternal obscurity.

So, what’s so special about an artist who’s hardly a household name? Put simply, it’s all down to his often-witty observation of daily life and the meticulous detail in which he recorded it, mostly on canvases smaller than an A4 sheet of paper and often less.

Spencelayh was born in 1865, in Rochester, Kent, the youngest of 11 children whose father’s family firm of engineers and iron founders was far removed from the art world. However, at the age of 20, Charles enrolled at the National Art Training School in London, forerunner to the Royal College of Art, where he learned a meticulous and disciplined style of painting that was to endure throughout his career. 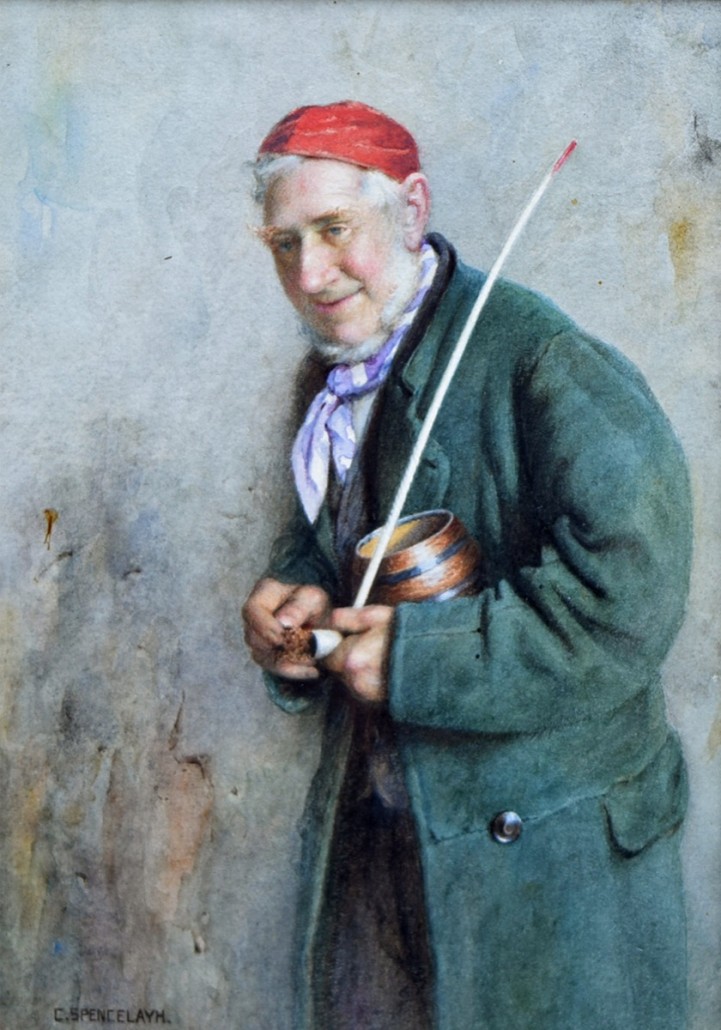 He won a prize for figure drawing and subsequently continued his training in Paris, exhibiting at the Paris Salon, returning to England to become a founder member of the Royal Society of Miniature Painters in 1897. The early years of his commercial career saw Spencelayh concentrate on painting miniature portraits. Indeed, he proved so talented in his ability to cram so much detail into his portraits, mostly in watercolors on ivory, that he earned the nickname “the Human Camera.”

This fanatical attention to detail was carried through to his later pictures but his camera-like technique earned criticism from some of his contemporaries who dismissed him as lacking in creative ability.

Spencelayh married his first wife, Elizabeth, in 1890, and the couple had a son, Vernon, who was born the following year. A year later, Spencelayh exhibited two of his miniatures at the Royal Academy for the first time. The artist showed a total of 30 paintings at the RA until his death in 1958, but he was never elected a member or accepted as an associate member, possibly because of his somewhat old-fashioned traditionalism.

In the early period, Spencelayh was commissioned to paint a number of illustrations for advertisements for products such as Colman’s Mustard and Goddard’s Plate Powder. Interestingly, a number of them feature the old men who were later to populate Spencelayh’s famous oil paintings. He also illustrated greetings cards, calendars and, latterly, sold reproductions of his more successful Royal Academy paintings.

However, the turning point in Spencelayh’s career came in the early 1920s when he was “adopted” by a Mr. Levy, a rich Manchester cotton merchant, who installed him rent free in a house at 19 Queen’s Road, West Didsbury. Levy had seen Spencelayh’s work at the RA. He had purchased a number of his pictures as they became ready and subsequently suggested the artist and his family move north. 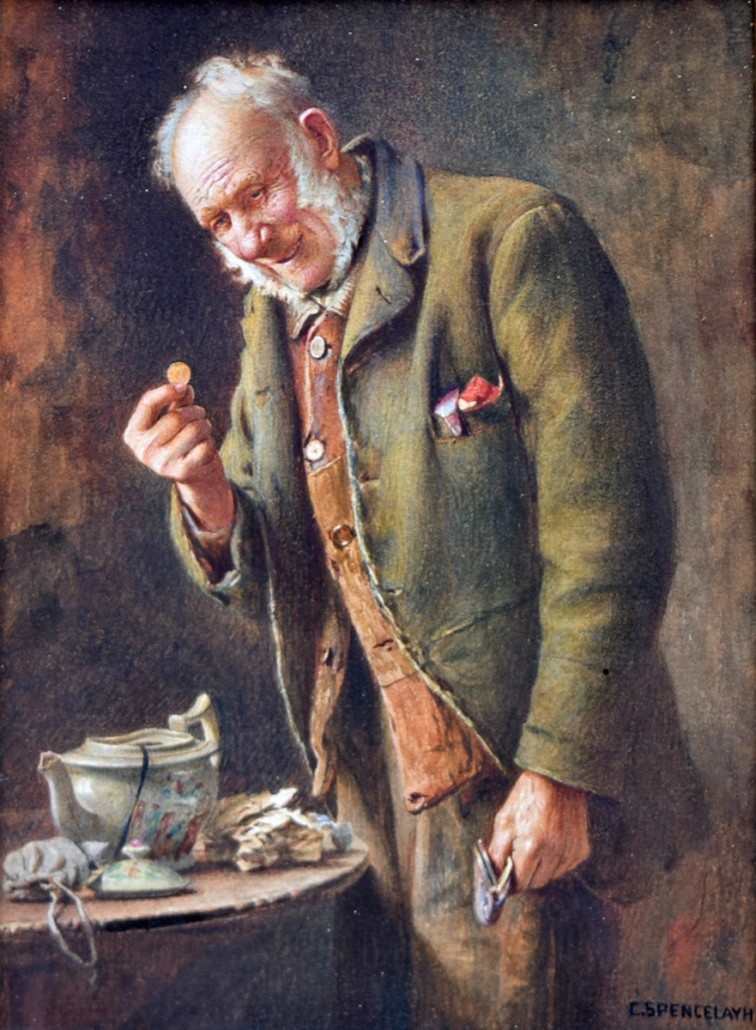 It was while he was under the Levy patronage that Spencelayh produced his best work. Levy managed the artist, found him commission customers, arranged selling exhibitions at such prestigious places at Manchester’s Midland Hotel and, with a spontaneous generosity of a true benefactor, removed all Spencelayh’s financial worries, allowing him to concentrate on his painting.

Spencelayh lived in West Didsbury for 10 years, during which time his output was prodigious. His best-known picture is probably The Old Dealer (The Old Curiosity Shop) exhibited to great acclaim at the RA in 1925. It showed an aged antiques dealer painting a birdcage, surrounded by a glorious hotchpotch of antiques that today’s collectors would give their right arm for.

In fact, such was the appeal of the bric-a-brac on display that Spencelayh was inundated with letters from admirers inquiring about whether they might be able to purchase the items in the painting.

Considered his masterpiece, it was reproduced on the front cover of the monograph on the artist published in 1978. It sold at Sotheby’s in December 2009 for £280,000 (hammer) setting the current world auction record price, in part because of its unusually large size of 51 by 61cms (20 x 24 inches).

It was in Didsbury that Spencelayh also painted a self-portrait as a gift for Mrs. Rosie Levy, his patron’s wife. A remarkable work, it shows a picture within a picture, a technique used often by the artist, in which the painting is the reflection of what can be seen in a gilt-framed oval mirror. My Reflection, as the paintings is titled, shows Spencelayh, in his studio with palette and brushes in hand, painting the self-same oval miniature self-portrait.

A chain-smoker (and he lived to 92) Spencelayh is pictured with the customary cigarette between his lips with, by way of a further visual practical joke, his ashtray placed in the right foreground, seen in full outside the reflection and in part within it. The picture sold in for £27,000 in 2008. 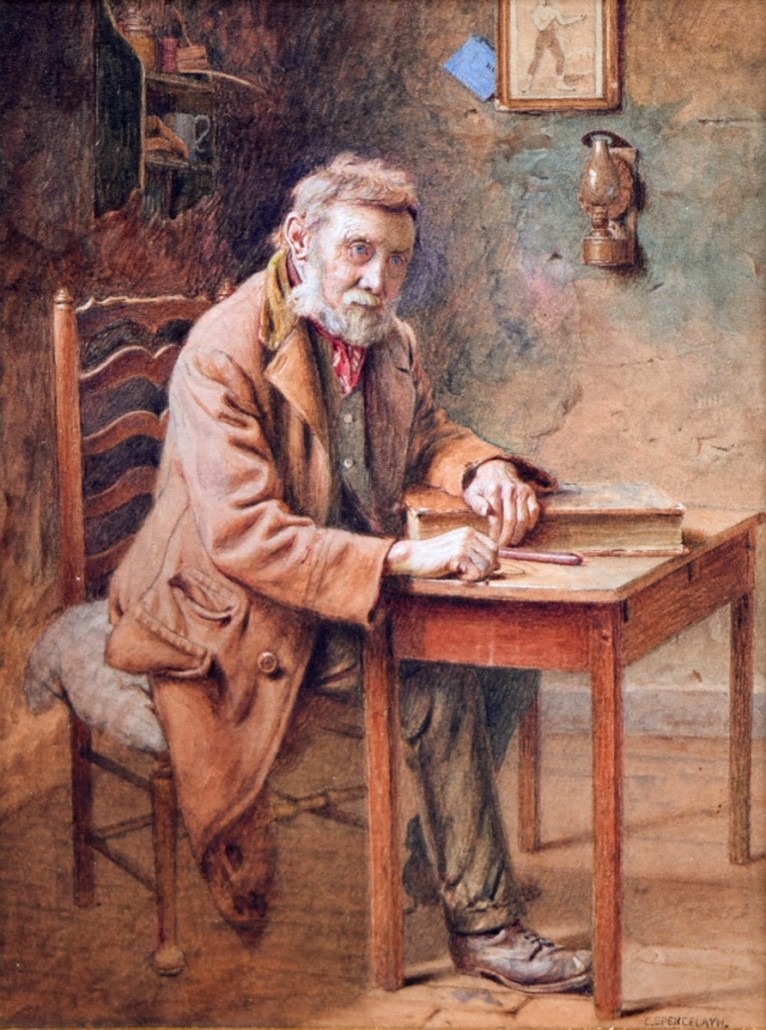 ‘The Penitent,’ a watercolor by Charles Spencelayh, estimated at £10,000-£15,000. Photo Peter Wilson auctioneers

The majority of Spencelayh’s paintings are in oil. His costliest watercolor at auction, incidentally, was achieved by The Latest Addition showing a Toby jug collector admiring his latest purchase. It sold in 2011 for £31,000.

Spencelayh’s first wife died in 1937, aged 72 and he married again in 1939, when he was 73. His second wife was Elizabeth Boxall, a widow aged 53, and the couple lived first at Lee in Buckinghamshire and then at Bozeat in Northamptonshire. She predeceased him, however, and he died three years later.
___