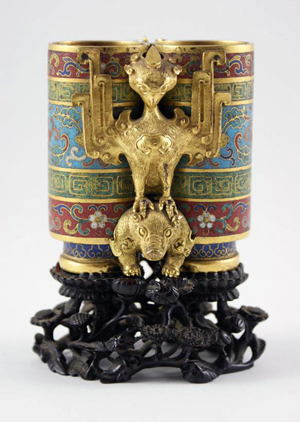 A rare 18th century gilt bronze and cloisonné vase with the Imperial Qianlong (1736-95) mark on the foot of each vessel indicating it was made by the most skilled craftsmen, possibly in the palace workshops of the Forbidden City itself. It sold for £228,000. Photo: Byrne’s auctioneers

LONDON – In his Notes on Japanese Art, Scottish architect and scholar George Ashdown Audsley (1838-1925), raved about a form of decorative enameled metalware called cloisonné. He wrote: “A careful examination of the Japanese enamels almost bewilders the mind and confuses the eye; on the one hand by the almost superhuman skill displayed in their manipulation and on the other by the marvelous diversity, intricacy and beauty of their designs.”

Clearly, Audsley was on to something to get excited about. Toward the end of the 19th century, Britain was flooded with cloisonné of varying quality as the country embraced Japonisme. Audsley continues: “We cannot attempt to describe Japanese cloisonné; it must be seen to be believed.” Thank you for that enlightening insight. So, what is cloisonné, and how can the newcomer buy wisely? Read on, and I’ll tell all.

First, what is it? Imagine that your most intricately decorated porcelain vase is in fact made of copper. Now, take the roll of 13 amp wire you keep in the scullery for when a fuse blows and, using a soldering iron, fasten the wire to the vase, following the outline of the pattern. Each separate shape and color of the design must become a tiny, self-contained partition, or cloisson, standing proud of the surface.

At this stage you’re less than halfway to creating a piece of cloisonné enamel. The next step is to fill each partition – or cloisson as they are called – with colored enamel pastes and pop into a hot oven … an exceedingly hot oven. Repeat for as many times as is necessary to produce the various colors in the correct thickness of enamel filling and finally polish for as many hours as it takes for the surface to gleam like a mirror.

That, in the very simplest of terms, gives an idea of the skill and patience employed by the craftsmen who made these delightfully decorative pieces. The only difference is that in antique versions, the vase was merely a hand-beaten, copper shape. The wire, usually thin gold or silver strips, formed decoration that was all in the creative mind of the man making it. The results were often stunningly beautiful, jewel-like creations that glint and sparkle with color.

What makes cloisonné fascinating to the collector of more modest means is the great scope it provides for someone who is prepared to research the subject. There are still many areas that are not fully understood and, although an unsigned piece of first-rate quality is seldom seen, an artist’s workshop or pupils produced some unsigned examples that the experts might have overlooked.

The art of cloisonné enamels was known to the Chinese from as early as the Ming dynasty (1386-1644). It originated as a substitute for the more expensive use of precious and semi-precious stones, the enamels acting as jewel-like ornaments.

Initially it was used to decorate copper bowls, incense burners and other religious objects with stylised decorations on a turquoise ground, the color derived from naïve mineral pigments and imported cobalt blue.

It is also interesting to note that early cloisonné enamels inspired porcelain and stoneware objects in which glazes were prevented from running together by raised strips of clay in the same manner as the soldered wire.

Almost all early Chinese cloisonné was produced in workshops in Beijing, where it received patronage from the imperial court and, because of its highly technical production processes, only the very rich. In 1680, the Kang-xi emperor established imperial workshops in the capital, where pieces of the finest quality were produced. Beijing remains a center for cloisonné production today, where old skills are still evident.

Earliest decorative motifs include cloud patterns, lotus flowers, the symbol of purity and beauty, and ling-zhi, a red mushroom found growing occasionally on plum trees, said to have remarkable medicinal value. The ancient Chinese described it as the “Miraculous King of Herbs.” Later motifs included dragons amid clouds, floral landscapes, scenes from court and mystical animals.

In the 1830s, thanks to research by Kaji Tsunekichi of Nagoya, the craft spread to Japan. He deliberately smashed one of the early Chinese bowls to learn the secret of how it was made. By the time Japan reopened her ports to trade with the West in 1853, his experiments had led to the founding of an entire industry.

The Meiji period (1868-1912) was one of dramatic and rapid change among Japanese craftsmen and artists. Full advantage was taken of the vast new market that had been opened up to them and, at first, quality was the keynote. However, factory mass-production was quickly introduced to cope with demand. Exit much of what was good.

Best advice on spotting the good from mediocre is to seek guidance from a reputable dealer or one of the major auction houses, neither of which charges a “consultation fee.” Ask to be shown how the major artists of the period signed their pieces so that in time, you can spot them for yourself.

With luck, you’ll be shown examples of the work of Namikawa Yasuyuki and Namikawa Sosuke (no relation), arguably the most important artists of the period. Pieces bearing either of their signatures can be worth up to four times more than anonymous cloisonné.

Meanwhile, try cutting you teeth on factory-made examples. At first sight, they appear to be of similar fine quality, but at prices usually less than £100, their shortcomings soon reveal themselves.

You could also try searching out cloisonné in other materials. Ceramic examples in both porcelain and earthenware were made in the late 1870-1880s and although not technically important, they are highly decorative.

Of paramount importance when buying is quality and condition, a problem in all areas of collecting, but vital when buying fragile cloisonné where damage can affect value to a frightening degree. Point is, the enamel does not fuse to the copper body, it merely adheres to it.

Consequently, the slightest knock and the fragile slivers of enamel flake off at an alarming rate. Restoration is horrendously expensive, if not impossible. So a damaged piece will always be so and can even deteriorate still further without apparent reason. 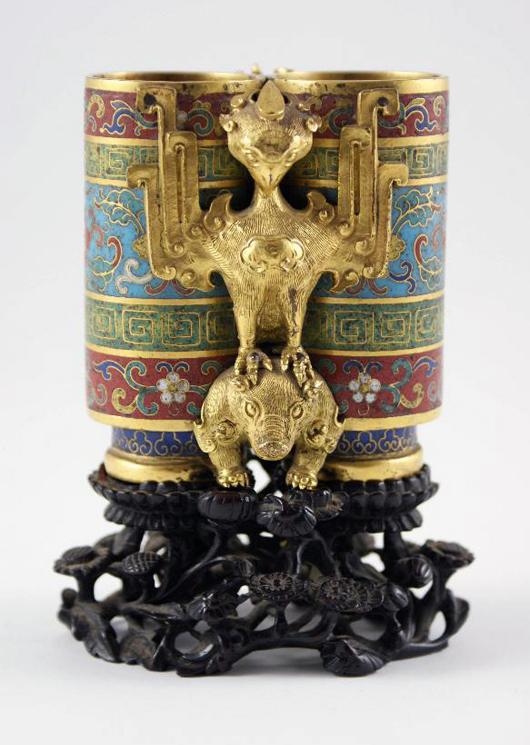 A rare 18th century gilt bronze and cloisonné vase with the Imperial Qianlong (1736-95) mark on the foot of each vessel indicating it was made by the most skilled craftsmen, possibly in the palace workshops of the Forbidden City itself. It sold for £228,000. Photo: Byrne’s auctioneers 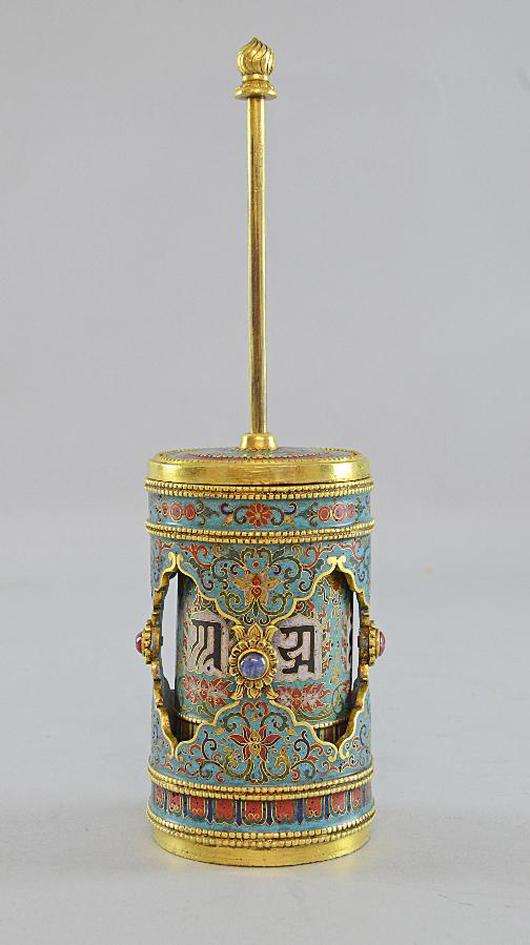 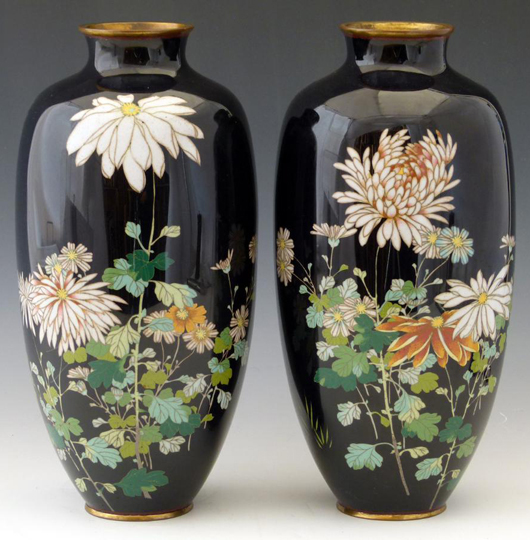 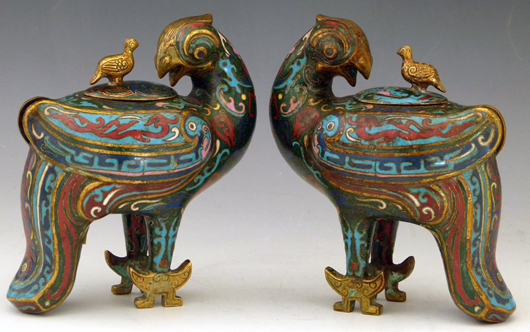 A pair of Chinese cloisonné mythical bird vessels or censers each with lidded back, estimate £500-600. Photo: Peter Wilson 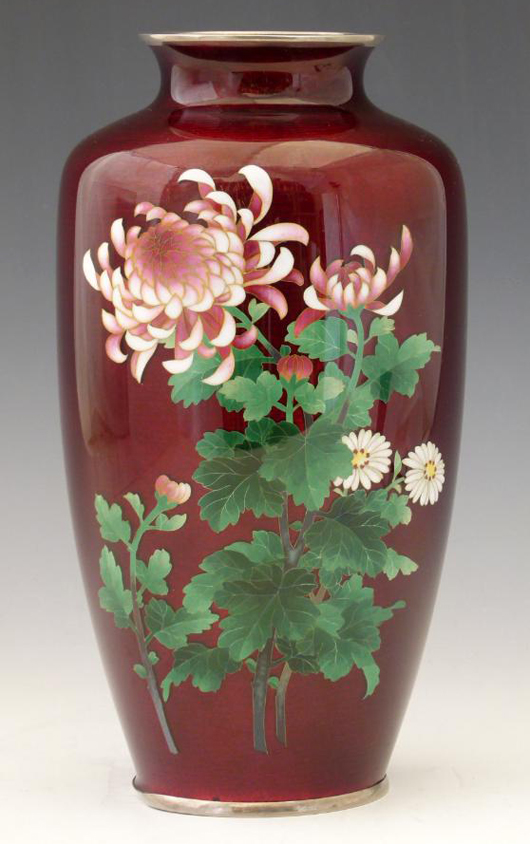 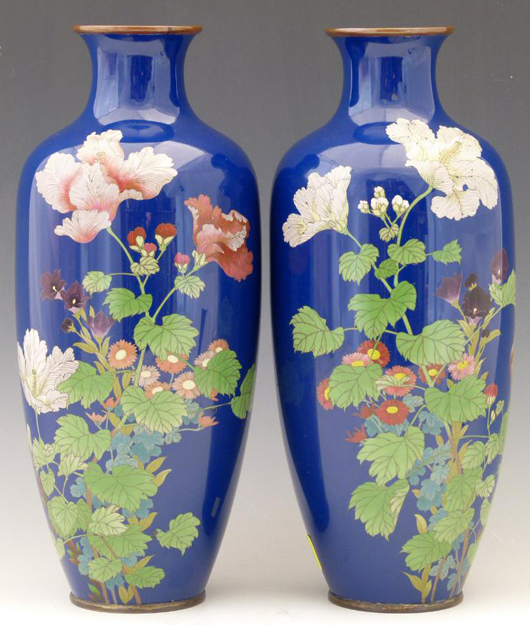 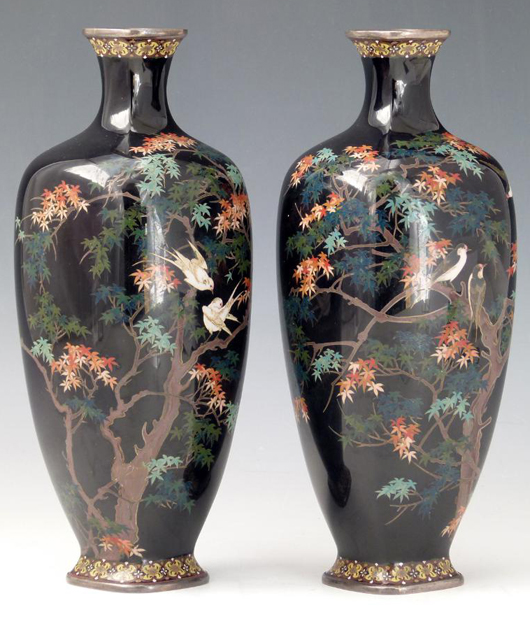 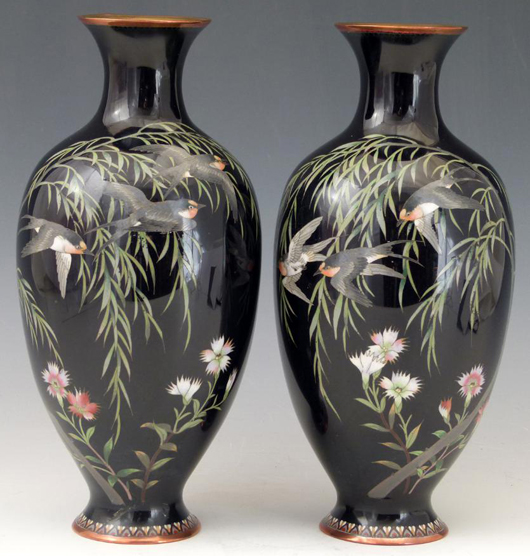 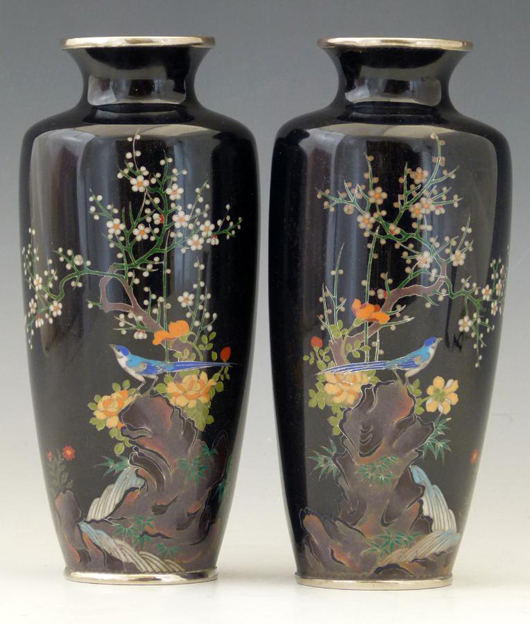 A pair of Japanese blue/black cloisonné vases decorated with a blossom on a rocky outcrop, estimate £100-200. Photo: Peter Wilson

A Japanese cloisonné vase, the turquoise ground decorated with a bird among flowers and foliage, estimate £130-180. Photo: Peter Wilson