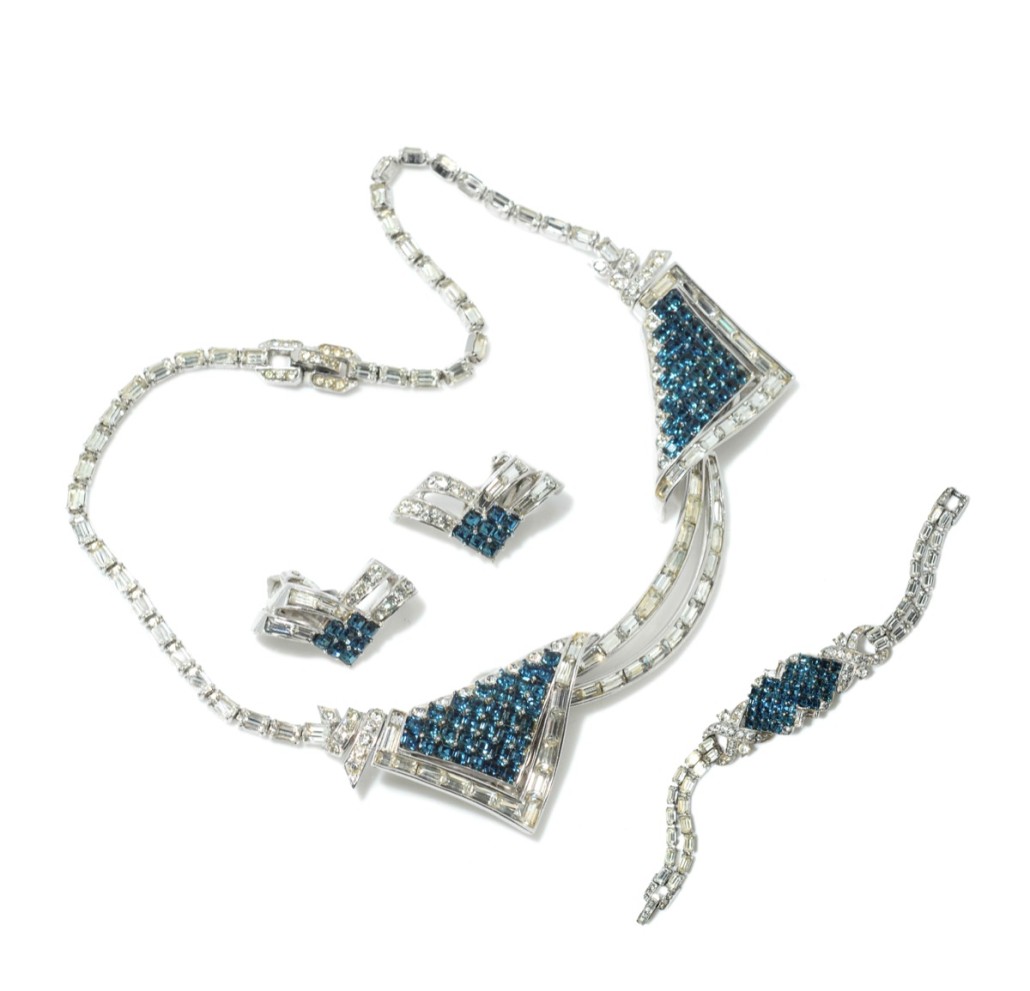 This rare parure comprising earrings, bracelet and necklace dates from the 1940s and was designed by Marcel Boucher (1898-1965). The necklace also contains a pin that can be released and worn separately to secure a fur stole. The stones simulate light blue sapphires and diamonds on silver tone metal, which is rhodium plated. Boucher was apprenticed to Pierre Cartier and moved to New York from his native France in the 1920s, working for Mazer Brothers. He set up on his own in 1937. His wife Sandra, who had worked for the Fifth Avenue jeweler Harry Winston, continued the business after her husband’s death. Photo Candice Horley

LONDON – It’s a charity shop in a prosperous town (no, I’m not letting on which) that we call on often. I buy books and CDs; the Business Manager, (Mrs. P) buys costume jewelry. All of it is really stylish and much of it so inexpensive that, if money is tight, it’s good enough to give as Christmas presents. She assures me it remains highly wearable.

Just how wearable ladies can discover for themselves at New Year antiques fairs in Knutsford, Cheshire and Harrogate, Yorkshire where there will be stands selling glittering collections alongside Art Deco prints and ceramic figures – the era when costume jewelry first appeared.

It might all glitter, but gold it ain’t, which is the whole point: It was the early 20th century before manufacturing techniques and specialized mass-production machinery first appeared that was capable of making base metals and glass sparkle like the finest gem-set jewelry.

Emanuel Ciner founded his company in New York in 1892 making fine jewelry with gold and precious gems. It moved to costume jewelry in 1931 but concentrated on pieces of the highest quality, all craftsman-designed and handmade. It continues today under the direction of Patricia Ciner Hill, Emanuel’s granddaughter. Elizabeth Taylor was one notable customer and is reputed to have once spent £20,000 on their jewelry in a day. This bracelet is set with ‘flawed emeralds and diamonds’ on silvered metal with rhodium-plated back. Photo Candice Horley

The phenomenon was not new, however. Eighteenth century aristos flaunting their diamonds and emeralds in the European courts prompted an increased demand for imitations, and in 1758 the Viennese goldsmith Joseph Strasser hit on the idea of using so-called paste glass. When polished with metal powder, this heavy, translucent glass with a high lead content, appeared to shimmer in the light like the real thing.

Victorian ladies loved their paste jewelry, while the Austrian glass-cutter and jeweler Daniel Swarovski (1862-1956) used the same high-lead-content glass to produce his famous crystals. When backed with foil, they were capable of emulating almost any gemstone.

The deceit was completed in 1892 when he patented an electric machine capable of cutting the crystals in quantity. Rhinestones were originally rock crystals found in the river of the same name, but Swarovski began producing crystal rhinestones in the 1950s. 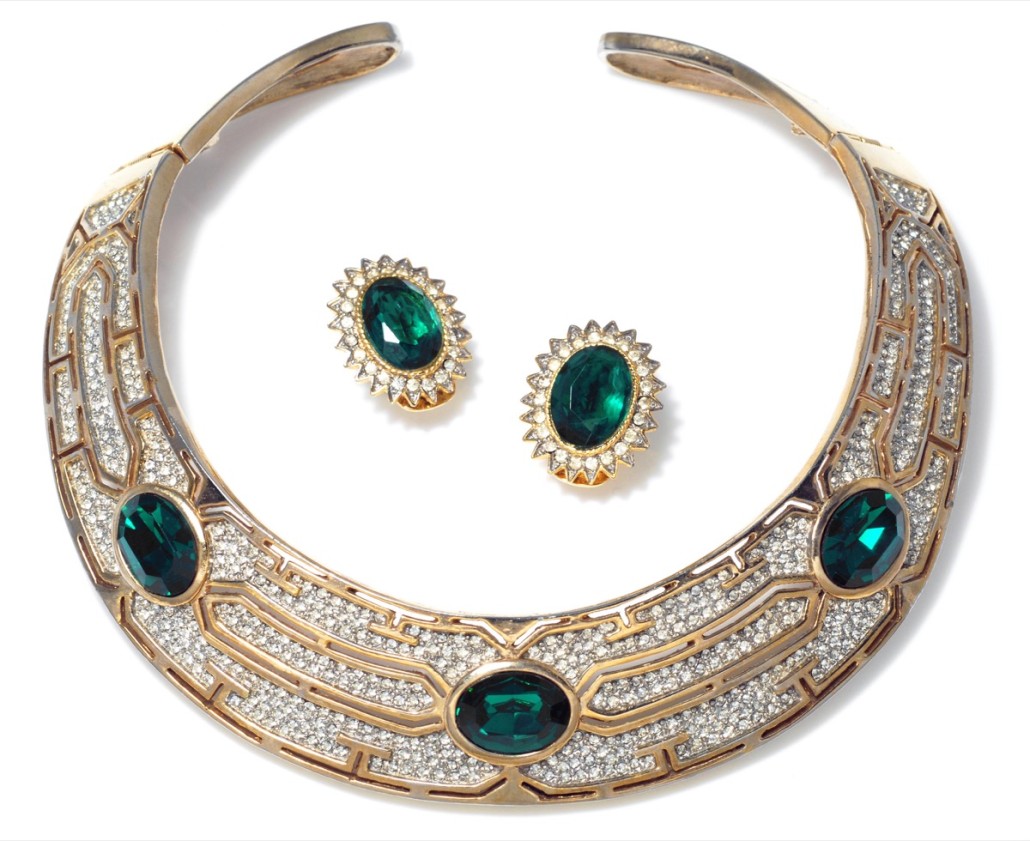 The Les Bernard jewelry company was formed in 1963 by Bernard Shapiro, son of Harold Shapiro of the Vogue jewelry company and Lester Joy, and ceased trading in 1996. Their often glamorous pieces were innovative and used techniques not tried previously such as mixing stones like marcasite and rhinestone with crystal and enamel. Some of their jewelry, similar to this ‘emerald and diamond’ collar and earrings set, was used on the set of the TV series ‘Dynasty’ in the 1980s. Photo Candice Horley

The Jazz Age of the 1920s saw the birth of the modern costume jewelry movement. Emancipated woman was no longer the stay-at-home wife restricted to wearing only the jewelry inherited by her husband and worn by her as a show of his wealth.

Instead, she raised her hemlines and went to work, experimenting with the moderne: the new colored plastic Bakelite, developed by Belgian chemist Leo Baekeland in New York in 1907, other synthetics such as celluloid and acetate and chrome, all throwaway commodities that could be replaced as the whims of fast-changing fashion demanded. 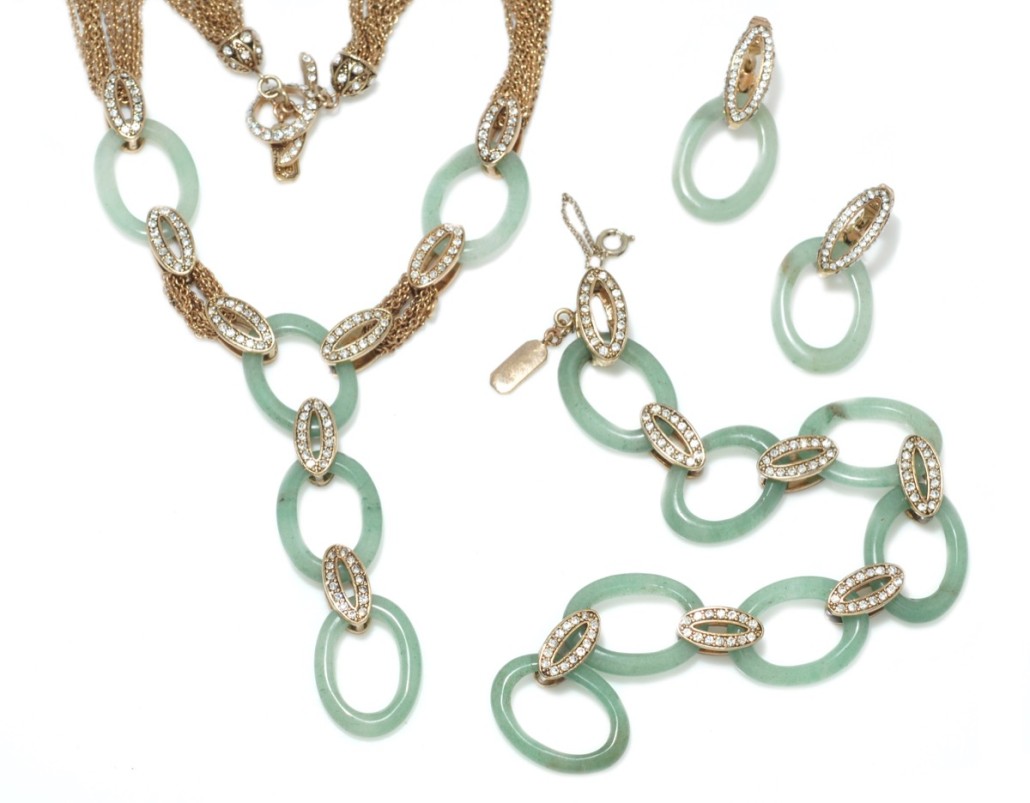 Brothers Michael and Joseph Chernow founded Monet, which began manufacturing costume jewelry in New York in 1937. Influenced by both Chanel and Schiaparelli, their early designs featured large multicolored rhinestones to represent various gemstones, but as one of the longest running companies – it is still in production – everything from charm bracelets to watches and pens can be found with the trademark name. Collectors value early pieces most, like this faux ‘jade’ parure set on gold-colored metal comprising necklace, bracelet and clip earrings, which date from 1970. Photo Candice Horley

By the 1930s, working girls could afford Hollywood chic and doyenne of the costume jewelry movement, Coco Chanel, declaring: “It doesn’t matter if it’s real as long as it looks like junk!” She and her great rival Elsa Schiaparelli led the Paris coterie of designers who dictated style with their big, bold statement pieces with fake gemstones and abstract shapes. 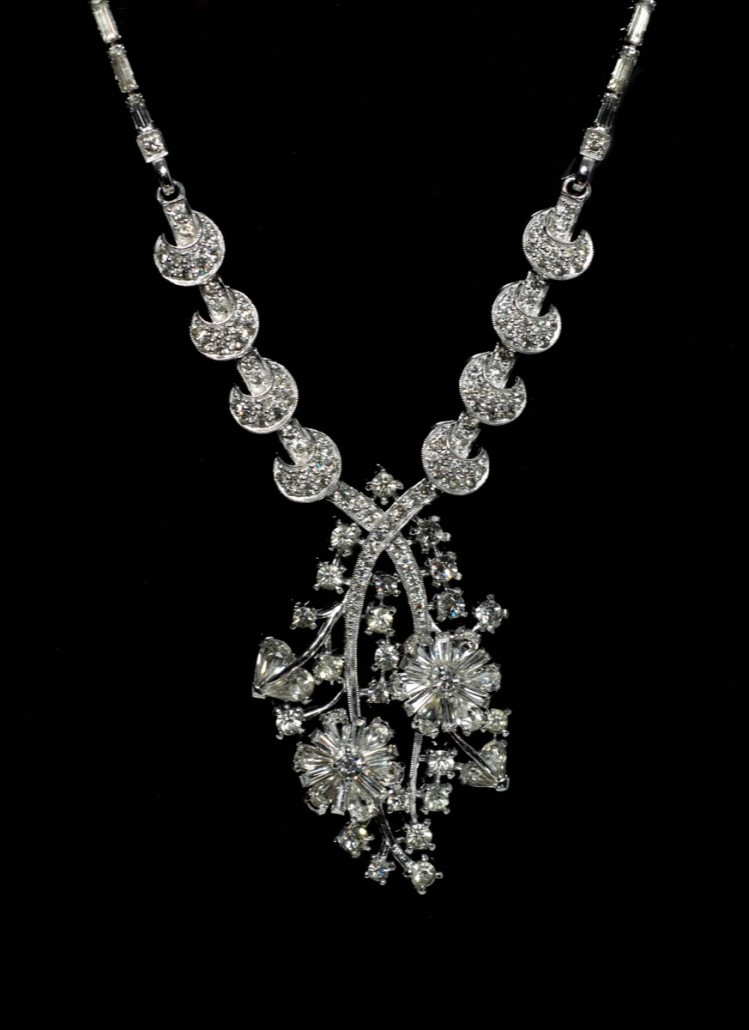 The Pennino brothers, Oreste, Frank and Jack, founded their company in New York in 1926 and made high-quality costume jewelry using rhinestones in classic design settings that echo those of the 18th and 19th centuries as well as the 1930s cocktail-style jewelry, as favored by Hollywood starlets of the era. This classic necklace dates from about 1950 but recalls a style a century earlier. Photo Candice Horley

By the second half of the 20th century, costume jewelry designers were enjoying a golden period when, ironically, the rich and famous responded by wearing the stuff even though they could easily afford of the real thing. 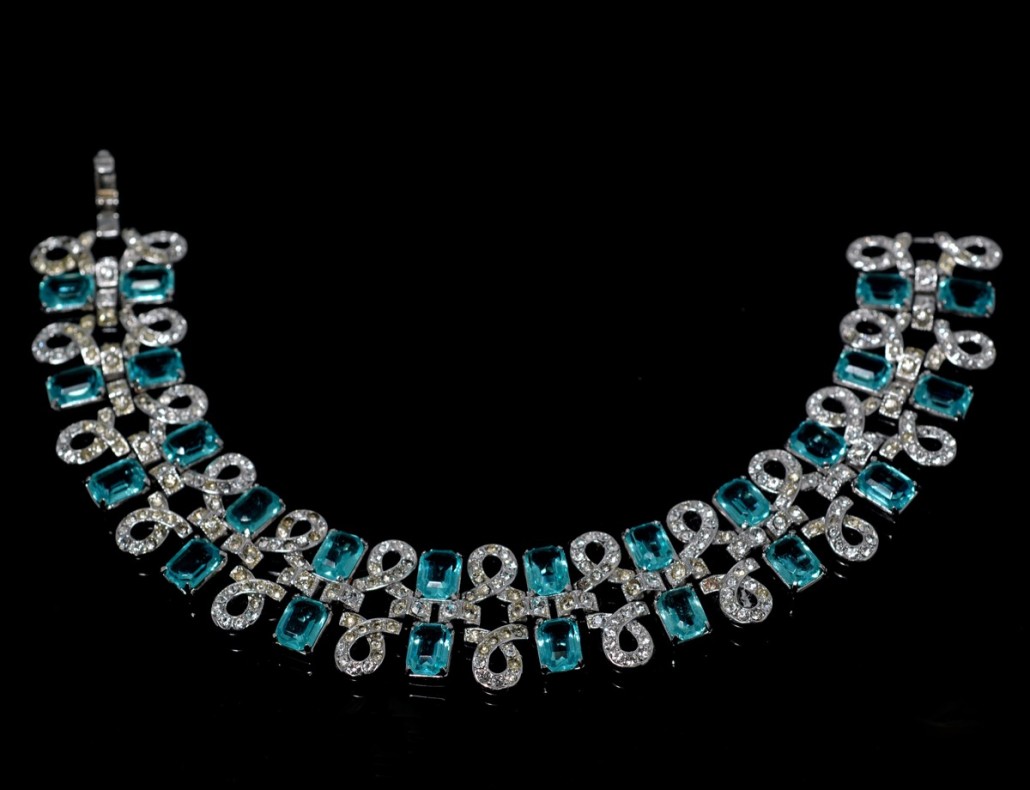 Trifari, founded in 1912 by Italian immigrant Gustavo Trifari, the son of a Napoli goldsmith, is another company still in business. It is pieces like this 1940s bracelet that collectors want most. Madonna is said to be a fan. The firm’s chief designer was Alfred Philippe from 1930-1968. His so-called Jelly Belly brooches are particularly sought after. A series modeled as domestic and wild animals, their bellies are formed by a single Lucite “pearl.” The rare poodle is among the most valued. Trifari produced a series of crown brooches in 1953 to mark Queen Elizabeth’s coronation. Photo Candice Horley

Surrey dealer Candice Horley specializes in 20th century costume jewelry from the major European and American designers and pictured are some of the pieces she will have on sale at Tatton Park antiques fair on Jan. 8-10 and at the Pavilions of Harrogate fair at Yorkshire Showground on Jan. 22-24.