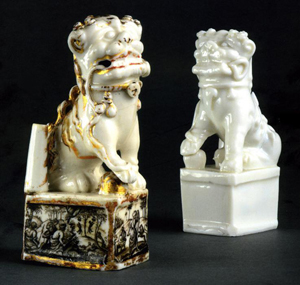 LONDON – Readers of this column are unlikely ever to be been clobbered and skinned, but anyone who collects early porcelain might well have been fleeced. Don’t worry if this sounds meaningless, read on and all will become clear.

First, a couple of definitions. If porcelain is said to have been “clobbered,” it means the piece has, in effect, been decorated twice: once when it was first created, and again by someone else, adding more designs over the top of the original.

Because some china patterns are rarer than others, it is also not unheard of for a piece of porcelain to be “skinned,” that is the original decoration removed to be replaced with a more sought-after design.

In either case the reason is obvious: If a piece is made more salable it therefore becomes more valuable. The end result is also obvious: The seller is laughing all the way to the bank and the buyer is fleeced!

Of course, that’s the simple, tongue-in-cheek, explanation. In truth, it is much more complicated but no less fascinating. The detective work and research in spotting such doctored pieces is yet another of the joys of collecting early porcelain.

Inspiration for my tackling the topic came in the form of an auction catalog for the sale of the Helen Espir collection of European decorated Oriental porcelain. The collection was sold by auctioneers Woolley & Wallis of Salisbury, Wiltshire.

Prices were generally affordable, with a few exceptions, but it was her self-penned introduction to the catalog that caught my attention, and as the author of a book on the subject, clearly Espir knows what she is talking about.

She explains that as a longstanding collector of Chinese ceramics, she had always shunned what she describes as “clobbered hybrid objects … unworthy of a serious collector.” But in 1993, she purchased a Chinese bowl because the base was marked with an inventory number from the collection of Augustus the Strong, Elector of Saxony. (For the uninitiated, he was fixated by Chinese porcelain. Having funded efforts to discover how it was made, he founded the Meissen factory. More later).

To her dismay, however, Espir discovered the bowl had been decorated with its red and blue pattern in Holland. It was the catalyst for a long period of research, culminating in publication of her book in 2005. I am on the lookout for a copy.

Prior to her research, this was an area largely ignored by connoisseur collectors. In the late 1600s and early 1700s, Europe had little or no porcelain of its own. Nevertheless, demand was massive, particularly for the tea tables and dining rooms of the landed classes, so porcelain was imported in vast quantities from China.

However, much of it was relatively plain white with simple underglaze blue decoration or just plain white undecorated ware that was perhaps too subtle and understated for Western tastes. After all, if you were rich, you wanted to show off your wealth.

No problem. Such pieces were the raw materials, the blank canvases if you like, for the porcelain decorators of such centers as Amsterdam, London, Liverpool and Staffordshire. In a few short years, hundreds of thousands of pieces flowed from the China-trade Dutch East India cargo ships to be overpainted in grand and colourful style before going on sale in the finest shops in Europe’s capital cities.

Augustus was among the best customers. His collection of more than 20,000 pieces filled his palaces and storerooms. Indeed, he spent so much money on his passion for fine porcelain that China became known as “the bleeding bowl of Saxony.” He is even said to have swapped a regiment of dragoons for 48 Chinese porcelain vases, today still preserved among the 8,000 pieces that remain at Dresden, and known as the “dragoon vases.”

In his quest for the means to pay for his obsession, Augustus engaged the services of a young apprentice apothecary named Johann Friedrich Bottger, who was said to have discovered a means of turning base metals into gold. It was a myth, of course, but having failed to deliver the gold, Bottger’s chance discovery of how to make hard paste porcelain in about 1708 – something the Chinese new centuries before – was the next best thing.

The Royal Saxon Porcelain Factory was founded at Meissen in 1710 and enjoyed continued and extensive patronage from Augustus. Just to add to the complexity of the topic, Augustus sent undecorated Meissen porcelain to Holland to be painted in Oriental patterns popular at the time.

China painting is recorded as having become established in London by 1720, notably in works in Limehouse and Southwark, where decorators are known to have purchased white Chinese porcelain directly from the China-trade importers. These white blanks were of such high quality, it was no longer necessary to paint on top of Chinese blue and white in attempts to westernise the designs.

Instead, they developed patterns of their own which, while their influence lay in the Orient, had a charming Englishness about them. Meanwhile, the development of English porcelain factories, notably Worcester, meant customers who wanted ware with European decoration were readily supplied by the home market.

As a result, European painters had stopped using Chinese porcelain almost completely by about 1775. At the end of the 18th century, however, a new trend developed, that of clobbering in the true sense of the term. By then traditional Chinese blue and white ware had fallen out of fashion and became unsalable.

To use up old stock, some of it already up to 200 years old, and to create colorful porcelain better suited to taste and fashion of the day, decorators set about overpainting pieces in thick enamels, for example turning boring blue and white into expensive Japanese Imari ware. To the purist collector of today, they are crude and have none of the elegance and sophistication of earlier examples.

The same collectors are also horrified by the “modern” practice of removing the pattern altogether to replace it with something more valuable. In the 19th century, for example, the Paris factory copied 18th century Sévres porcelain by adding painted panels of landscapes or classical scenes to enhance domestic china intended for everyday use.

And if that wasn’t bad enough, they also drilled the bases of the ware to imitate kiln holes found only in genuine Sévres pieces.

Question is, though, do these deceptions render doctored pieces unworthy, or are they simply part of the complex and fascinating story of European porcelain? I’ll leave you to decide. 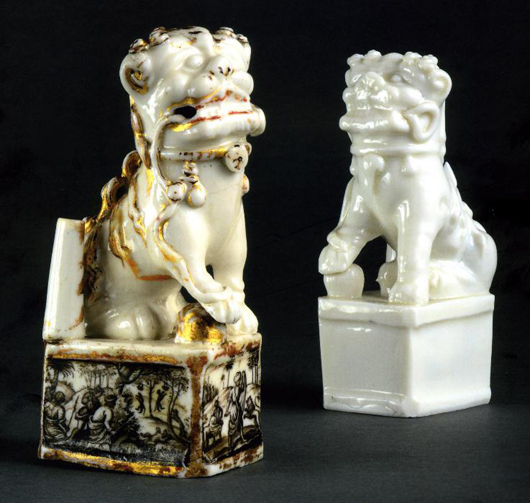 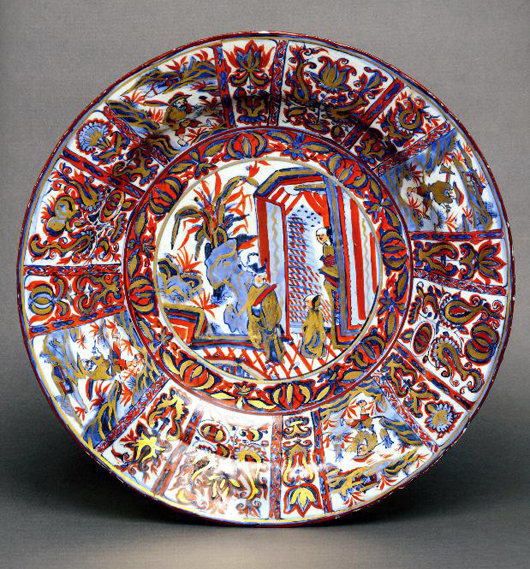 A massive mid-17th century Chinese porcelain charger – it measures 20 inches in diameter – decorated twice: first in underglaze blue when it was made and later in Holland with later, much more popular Imari pattern with red and gilt highlights. Saleroom estimate: £1,000-2,000, not sold. Photo: Woolley & Wallis 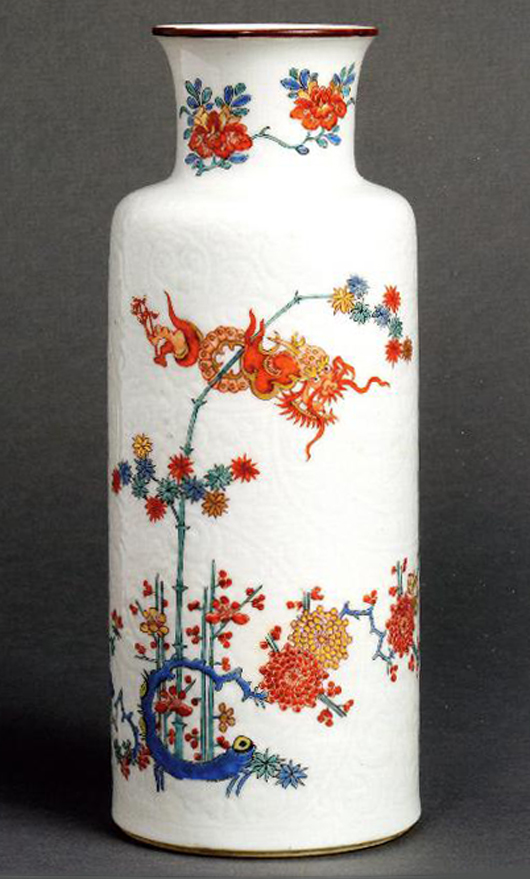 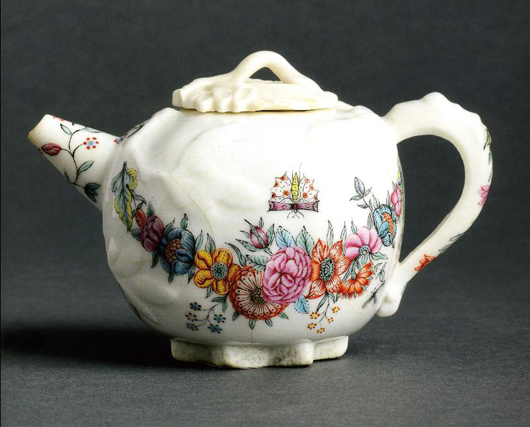 A rare early 18th century teapot which would have arrived as blanc de Chine, that is white and undecorated. It is believed the Germanic decoration of bees and butterflies around a spray of flowers was done by a German decorator working in Holland. Saleroom estimate: £3,000-5,000, sold for £5,800 ($9,206). Photo: Woolley & Wallis 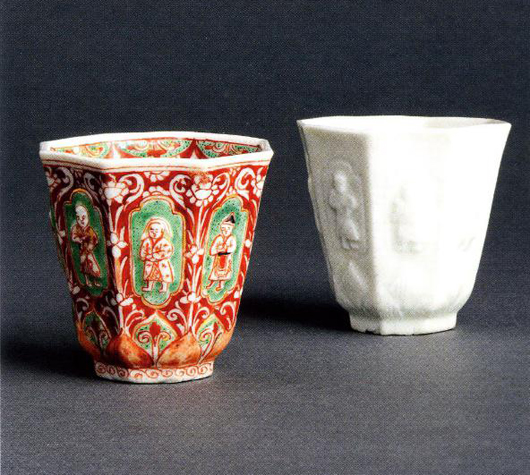 Two late 17th or early 18th century blanc de Chine beakers molded with images of the Eight Immortals. That on the left was decorated in England in green and red with black highlights. Saleroom estimate together: £500-800, sold for £1,000 ($1,587). Photo: Woolley & Wallis 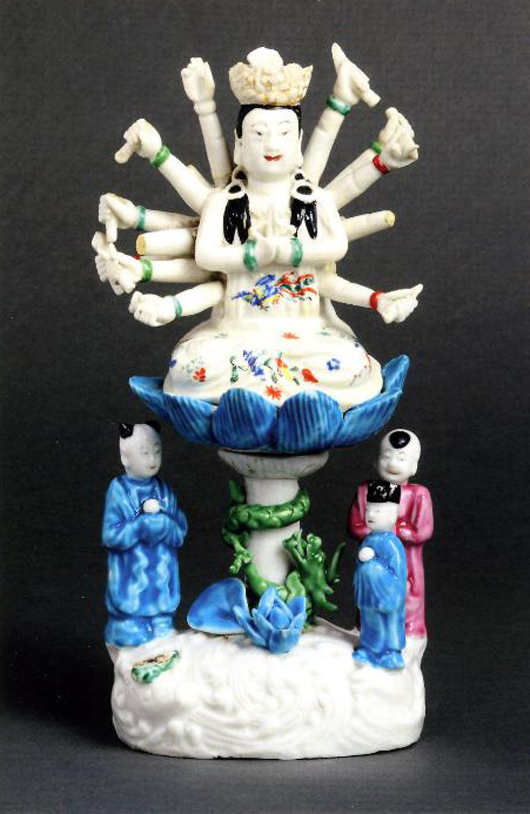 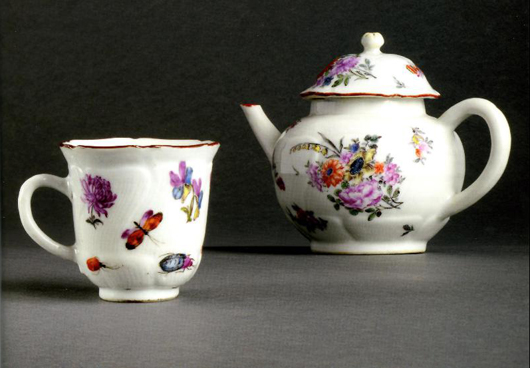 An 18th Chinese teapot and an associated cup, later painted with European flowers, butterflies, moths and insects in London. The artist’s name ‘F. Smith’ has been found on the back of a saucer with the same decoration. Saleroom estimate together: £1,000-2,000, not sold. Photo: Woolley & Wallis