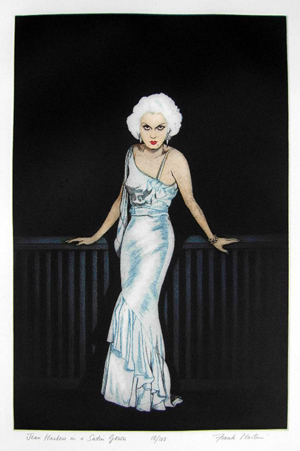 LONDON – Frank Martin might well have been one of the London’s countless “jobbing artists” – his description of himself – but his heart was in Hollywood. As a boy he had been enthralled by the stars of the silver screen, one of his heartthrobs being Norma Talmadge (1895-1957) credited as being the first actress to leave her hand and footprints outside the Chinese Theatre on Hollywood Boulevard’s Walk of Fame.

Today both are all but forgotten by today’s generation of collectors. A visit to a Cheshire antiques fair later this month will serve to raise both their profiles. For sale on one of more than 40 dealers’ stands at Tatton Park’s annual autumn show is a group of limited edition etchings by Martin, Norma’s portrait being one of the most compelling.

Unlikely subject matter for a member of the Society of Wood Engravers, Norma, Tallulah Bankhead, Clara Bow, Greta Garbo, Lillian Gish, Jean Harlow, Rita Hayworth, Greta Garbo, the Ziegfield Follies, the Keystone Cops and Montgomery Clift were all immortalized by Martin with skill and verve. That the prints were produced from carved wooden blocks is hard to believe.

Norma’s life was somewhat different to Martin’s. To impress her fans, she claimed to have been born in Niagara Falls, but in truth it was Jersey City, the daughter of an unemployed alcoholic. She began her film work as a teenager in 1910 at the Vitagraph Studios in New York and moved to Hollywood in 1922, establishing herself as one of the most elegant and glamorous film stars of the Roaring Twenties.

A specialist in melodrama, her most famous film was Smilin’ Through (1922), but she also scored artistic triumphs in Secrets (1924) and The Lady (1925). She met and married millionaire film producer Joseph Schenck in 1916 and they created their own production company. She retired after her two talkies proved disappointing at the box office, but by then she was extremely wealthy. Her younger sister, Constance, was also a movie star.

Interestingly, Frank Vernon Martin (1921-2005) was the son of a professional stage actress of the 1920s and ’30s, although father was altogether more serious: a scientist, he was secretary of the Royal Institution and biographer of the chemist and physicist Michael Faraday. Nevertheless, wherever his mother was appearing, her son went with her to watch from backstage. The experience inspired Martin’s life-long fascination with the acting profession, reinforced by him going to the cinema to see every available silent or talkie.

Martin was born in Dulwich, South London, and educated at Uppingham School, where he won a scholarship to study at Hertford College, Oxford. His studies were interrupted by the war and in 1941, he enlisted in the Royal Artillery. On demobilization he enrolled in the printing school at St. Martin’s School of Art, where he studied etching under Clifford Webb and wood engraving under Gertrude Hermes, one of the greatest 20th century wood engravers, later becoming her studio assistant.

Branching out on his own in 1949, he was elected to the Society of Wood Engravers in 1952, quickly becoming its secretary. There he met the New Zealand artist John Buckland Wright, who taught him etching privately and the following year found him a teaching post at Camberwell School of Art.

He taught etching, engraving, lino-cutting and graphic design, becoming senior lecturer in graphic design in 1965 and head of the graphic arts department from 1976 until his retirement in 1980.

Buckland-Wright also introduced Martin to Charles Ede, the founder of the Folio Society, who commissioned 11 two-color wood engravings for an edition of Thornton Wilder’s The Bridge of St Luis Rey (1956). He received seven further major Folio Society commissions in the succeeding 10 years, including Stendhal’s Scarlet and Black (1965), works which were described as “the best series of post-war English illustrations.” In 1961 he was given an exhibition at the Folio Society.

He began producing limited edition prints of his movie stars in the late 1970s and early ’80s, first with large linocuts, then woodcuts, etchings and drypoints, in color and monochrome. Some he published himself, while others were published by galleries in Britain and the United States.

An exhibition of his Hollywood prints at the Roundhouse, in London, coincided with celebrations marking the 75th anniversary of cinema. It was opened by Harold Lloyd, the Hollywood silent movie star, who subsequently visited Martin in his Chiswick studio.

The prints became much sought after. At the same time he produced a considerable number of large drawings and watercolor paintings, many of which are illustrated in his book Hollywood-Continental, published in 1988

Martin held his first one-man show in 1956. In all, there were 25 exhibitions at, among other venues, the Folio Society, the National Film Theatre, the Lyric Theatre, Hammersmith, and the Leeds International Film Festival. Overseas, he exhibited in Berlin, Dublin, New Zealand and the United States.

He was elected a fellow of the Royal Society of Painter-Etchers and Engravers in 1961, a member of the Society of Industrial Artists and Designers in 1959, and an honorary academician of the Accademia delle Arti del Disegno of Florence in 1965.

A full catalog of his work, The Wood Engravings of Frank Martin, was produced in 1998, at the end of which Martin modestly described himself as a “jobbing artist.” In later years, he wrote and illustrated four large limited edition books, the last of which was Drawn From Life (2005), a series of reminiscences about the young female models whose likenesses and personalities he had encapsulated over the years.

The prints illustrated here will be offered in the Knutsford, Cheshire, fair by exhibitors Candice Horley and Steven Bishop. They will be among more than 40 dealers from across the UK showing treasures from the past 300 years and valued at more than £1 million.

The fair runs daily from Sept. 19-21 (11 a.m.-5 p.m.) and admission is £5. However, readers can get complimentary tickets by registering online at www.cooperfairs.com . Admission to Tatton Park is £5 per vehicle and includes the opportunity to enjoy the park facilities. 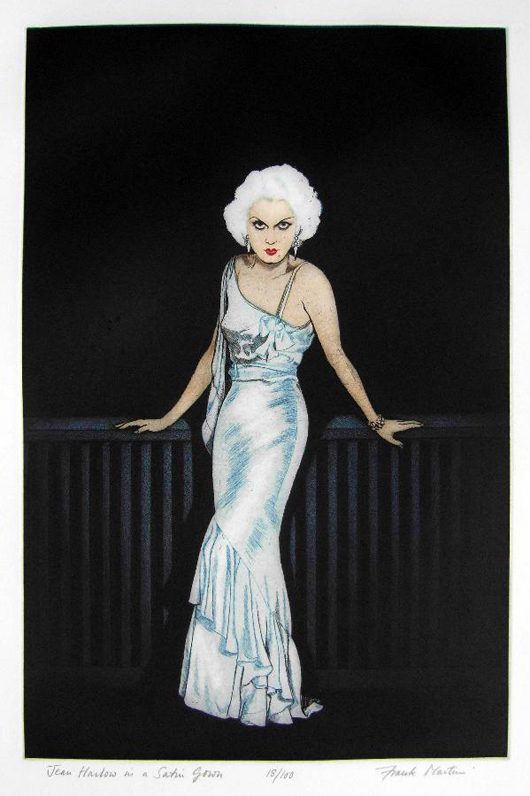 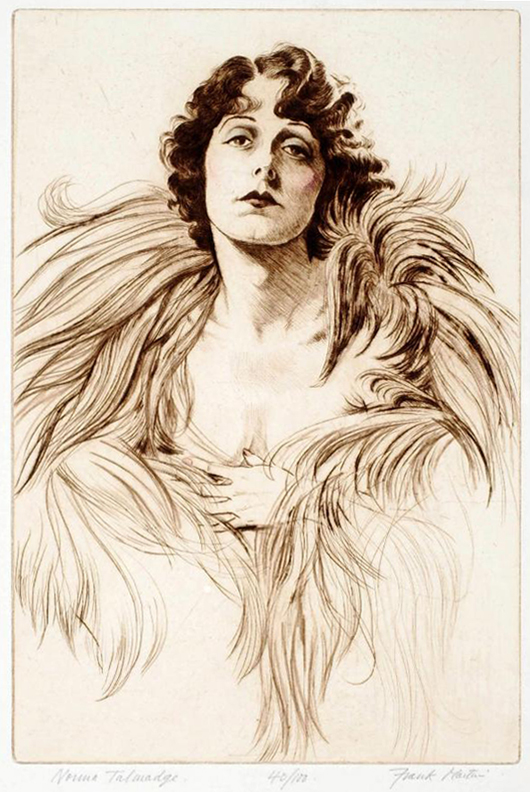 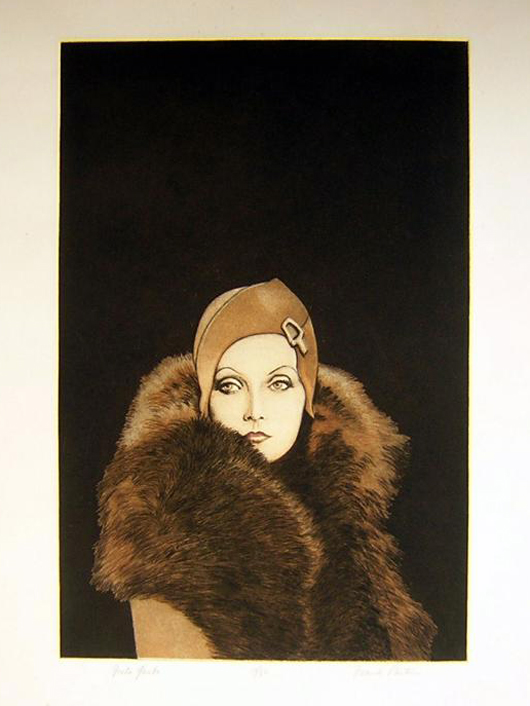 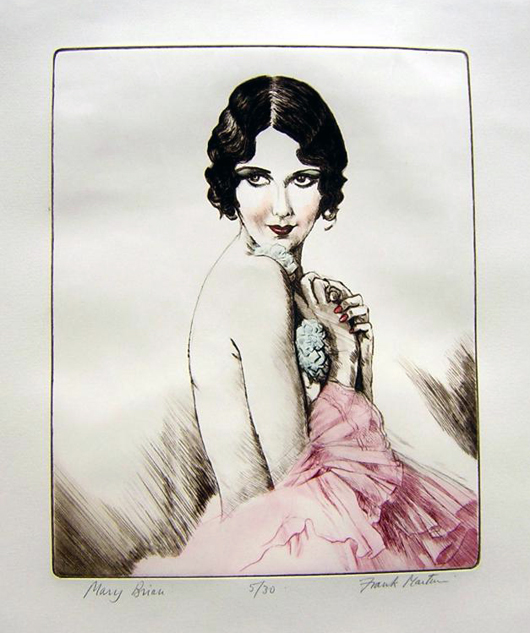 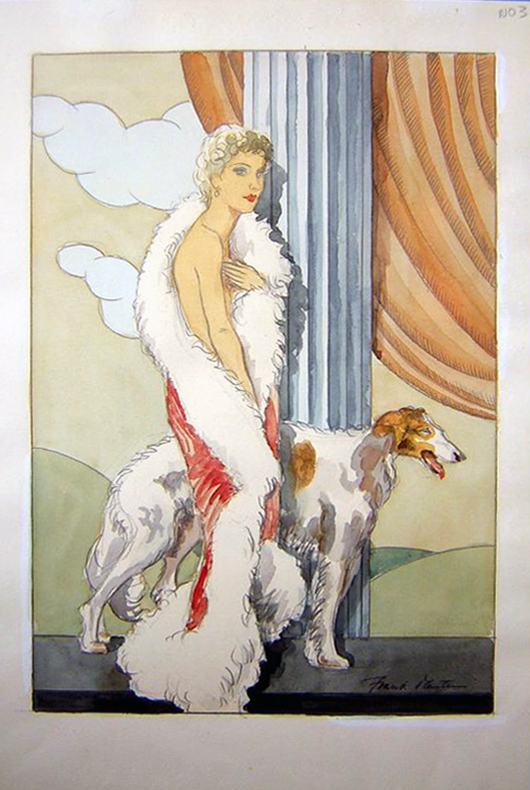 A watercolor by Frank Martin of an exotic Art Deco girl with her borzoi hound. Price: £995. Photo: Candice Horley 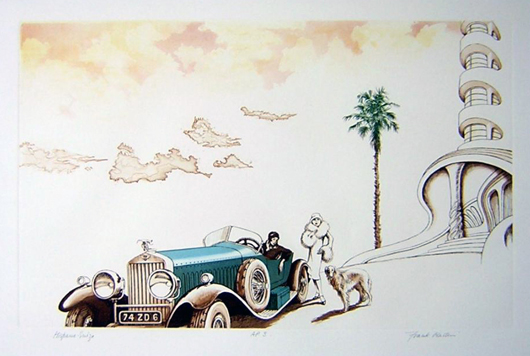