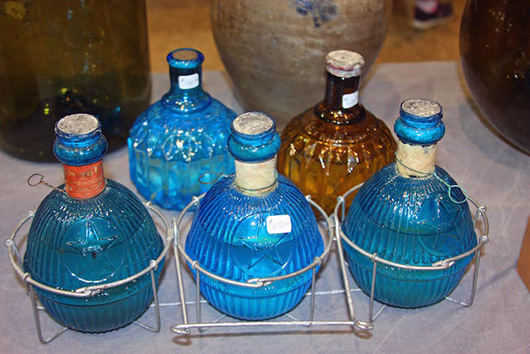 LONDON – How did I get interested in antiques and collecting? Down a hole in a Victorian rubbish dump. Unlikely, I know, but it’s true.

It was the discovery that an area of my hometown, romantically called Fol Hollow, was actually a derivation of Foul Hollow, because a century or more ago, that was where the residents dumped all their waste.

Alerted to the story as a young reporter on the local newspaper, I was amazed to see the clay pipes, pot lids, ginger beer bottles and other collectables being unearthed by the wheelbarrow load. Until then, I thought all stuff that dated from the 19th century was in museums.

The dump had been uncovered when high-grade silica sand had been discovered beneath it. The bulldozers moved in, as did hordes of bottle diggers and after joining them, after a few minutes, my garden fork stuck gold: an embossed glass bottle, strangely with a marble in its neck.

A little research in the town reference library revealed that in the early 1800s, fizzy drinks manufacturers had a problem stopping gas escaping from their products.

In 1814, in a patent application for a bottle-filling machine, one William Hamilton had sketched a bottle with a pointed bottom, forcing it to be stored lying on its side. This ensured that the cork always remained moist and didn’t shrink, allowing the gas to escape.

This remained the common method of bottling aerated mineral water until 1875, when Hiram Codd patented the marble stopper. Trapped inside the bottle’s neck, the marble was forced upwards by the gas as the bottle was filled, pressed hard against a rubber washer in the lip.

It worked famously, so well in fact that when the time came to open the bottle, a sharp rap on the bottle top was required to dislodge it. It’s how the British phrase “a load of codswallop” was coined, apparently.

Soon our house was full of the things – we made a point of collecting only those bearing the names of drinks firms from our hometown – which were quickly joined by other “discoveries” such as clay pipes, pot lids, cobalt blue glass poison bottles – they have ribs and “pimples” in their design so that they could be identified by the visually impaired – and pots which once contained ointment so magical it could cure everything from scrofula to sciatica.

It had been a similar story for 70-year-old Marti Newman, expect she didn’t have the sweat and toil of digging for her treasures. She found them as a young woman out diving off the coast in South Florida.

We’ll be home from Florida by the time you read this, but we met Marti at the annual show and tabletop sale run by the Suncoast Antiques Bottle Collectors’ Association. Not only was she one of the oldest members, she was also exhibiting glass with links to the earliest of all period American glass.

Her first find, she explained, was an antique soda bottle – pop to us Brits – covered in barnacles. Like us, it was enough to start her on a long road of collecting, but now was the time to downsize.

One of her prize pieces was an early flask of a type first made by Henry William Stiegel, at his glassworks in Pennsylvania, which he founded in 1763. It was made of blown clear glass and decorated with charming hand-applied gilt decoration and etching.

Her 19th century example could be mine for $50 (£33) although it would never have survived the suitcase journey home. Actually, I would have preferred her gin flask decorated with a likeness of opera singer Jenny Lind (1820-1887), the “Swedish Nightingale.” It was made probably to commemorate her yearlong tour of the U.S. in 1850, organized by circus entrepreneur P.T. Barnum. Price: $125 (£82).

Or I did until I saw the so-called “back bar bottles” – saloon whisky decanters being exhibited by Paul Van Vactor. He had traveled the 900 miles from his home in Louisville, Kentucky, to show at the fair and the quality of his collection was superb.

The best were decorated in white enamel, overlaid onto the body of the decanter with the name of the saloon where they were used. He tries to concentrate on those from his hometown, although after 45 years of collecting, his show table featured everything from mini, pint, quart named whisky bottles and Kentucky blue decorated stoneware flagons.

Exhibitor Dave Theiben is a Floridian but was making the show part of his vacation. His oldest exhibit was a German, black glass wine bottle with snapped pontil. That’s the rough scar where the object has been broken away from the rod of glass from which it was made.

The pontil mark is important to collectors for dating purposes. Its presence indicates that a piece was blown freehand, while its absence means either that it has been ground away leaving a smooth dimple or that the work was mold-blown and therefore later.

A group of good early wine bottles were on Charlie Livingston’s table. UK collectors pay handsomely for such examples, the earliest among which have a globular body and tall, drawn neck.

The so-called shaft and globe bottle was common in the mid-1600s, but by the end of the century, necks became shorter until, by the early 1700s, they had almost disappeared into the shoulder of the vessel. These are termed onion bottles, while those shaped like today’s bottles began to emerge in the 1740s.

Personalized, individually hand-blown bottles were valued possessions of the rich and were used over and over again. To avoid the owner losing them or them being claimed by another, they were often marked at the time of manufacture with his initials or coat of arms.

Later, the idea spread among tavern keepers, wine merchants and even universities. Many also bear dates, and while they do give an indication of the age of a bottle, they are more likely to relate to the wine’s vintage, or to commemorate important personal events such as a birth or the receipt of a knighthood.

Sadly none of the latter was forthcoming at the show, but Charlie Livingston had good examples of the former, with affordable prices around the $200 to $300 mark (£130-200). We hope to go back next year with more spending money. 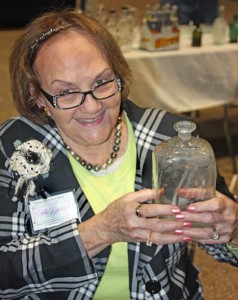 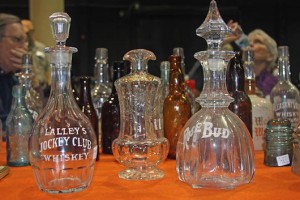 Some of the saloon bar whisky bottles shown by Paul Van Vactor. From the left, they are inscribed Lalley’s Jockey Club, Thorne’s Whisky and Rosebud. 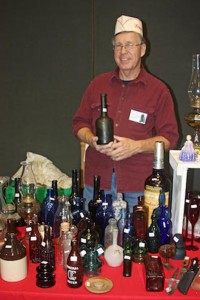 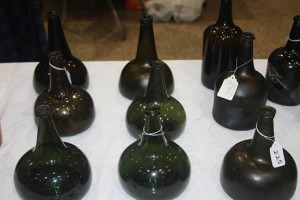 Some of the early shaft and globe and onion wine bottles shown by Charlie Livingston from Tampa, Florida. Those without the natural shine have been lifted from the seabed 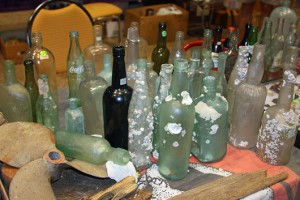 Seabed bottles, some of them encrusted with barnacles. 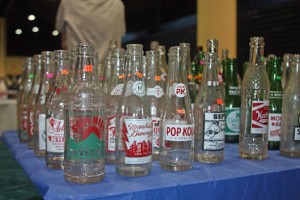 They may not be antique, but collectors will pay for vintage bottles transfer-decorated with leading brands both past and present. 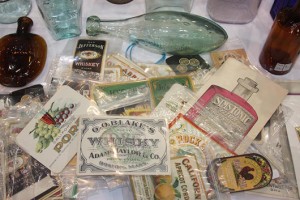 There is also strong demand among collectors for antique bottle labels, which can be purchased cheaply and are easy to store. The pointed bottle at the top of the picture is a Hamilton. Ironically it came originally from Bournemouth.