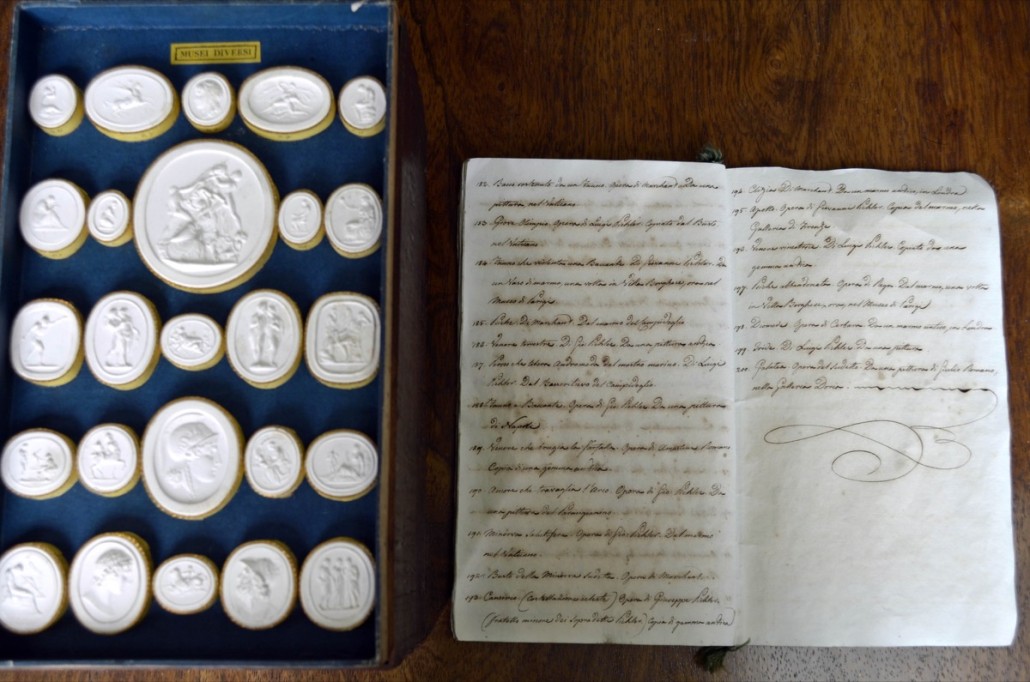 One of the trays containing some of the 200 classical plaster intaglios and reliefs. Alongside is the catalog, handwritten in Italian, describing each one. The collection sold for £2.400. Photo Ewbank’s auctioneers

LONDON – The auctioneer reached Lot 1624 in what had been a three-day marathon of a sale and as the bidding started to spiral, my thoughts turned to how lovely it would be to take a holiday.

Perhaps a sea voyage, some overland travel and a mixture of relaxation in foreign lands with the chance to soak up some of the culture of the people and the places I might encounter on my way.

If I’d been around in the late 18th or early 19th century when Lot 1624 was new – and fortunate enough to have enjoyed the benefits of a private income, of course – I could have taken the grand tour.

In those days, it was a part of a young gentleman’s education to spend anything from six months to as much as four years traveling around Europe studying its art, architecture, history, languages and culture.

Lot 1624: a collection of molded plaster impressions of classical subjects called intaglios, some of which are pictured here, was purchased as someone’s grand tour souvenir. Long before cameras, they would be collected en route as we might buy picture postcards. 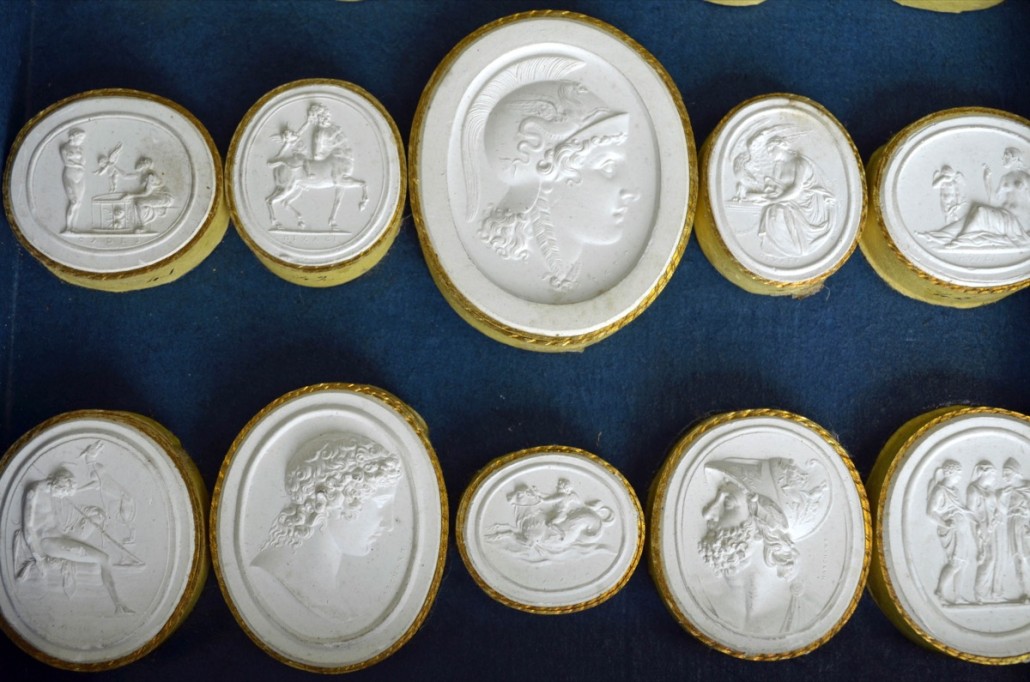 The detail of the plaster reliefs is exquisite. The portrait bust in the center of the top row is Achilles. Photo Ewbank’s auctioneers

With long distance travel a relatively new idea, and before travel agents and package tours had been invented, the grand tour might have been been better named the great adventure. Different versions were graded in terms of cost as well as time available, distance and itinerary.

Some young men of rank went straight to Italy by sea, others by a circuitous overland route with fresh relay teams of horses to pull the coach at every stage. Paris was a favorite starting point, usually followed by Vienna, Rome, Florence and Naples as the ultimate goals of most Grand Tourists, while the truly intrepid reached Greece.

Itineraries were planned with painstaking care so that arrivals in different countries coincided with great annual events. They included Venice’s memorable carnival or the city’s celebration of Ascension Day and the climax of any grand tour – Holy Week in Rome with the Pope blessing the crowds on Easter Sunday.

Learned “governors,” often impoverished dons such as Joseph Spence, Professor of Poetry at Oxford, traveled with parties to act as guides and to explain the intricacies of the Renaissance and post-Renaissance architecture and the art treasures they encountered.

Adventures were many and varied and danger lurked at every turn. Robbers routinely preyed on naive English travelers and dirty, uncomfortable inns en route were the source of disease. Inhospitable police and officials made traveling difficult, although crossing countless palms with bribes of folding money usually did the trick.

But the delights more than made up for the hardships. Sir Horace Mann, British resident in Florence for 48 years from 1738-1786 made a point of welcoming every single British visitor on arrival, as did Sir William Hamilton in Naples from 1764 until the end of the century. The welcome, naturally, was excuse enough for lavish parties and much merrymaking.

Sir William is best known for his marriage to Emma, Lady Hamilton whose affair with Lord Nelson made him one of the best-known cuckolds in history. What is less well known was his penchant for collecting Greek vases and his authorship of many learned books on the subject of Greek history. The grand tour was an inspiration to anyone who experienced it.

Visit Europe today and all you’re likely to come home with is tacky souvenirs, holiday snaps and a suntan. In the 18th century, the great age of the large and imposing country house, young men returned and transformed the decor and furnishings of their families’ country seats with their acquisitions.

Many became insatiable collectors, buying and commissioning works as they traveled to be shipped home, often becoming the first members of a family to acquire great treasures.

They and their descendants subsequently became patrons of the art with the result that English artists, sculptors, wood carvers, furniture makers and potters were encouraged to adopt new fashions and produce pieces capable of blending with their new surroundings.

The great furniture maker Robert Adam, for example, carved his career out of the commissions he received from customers who had made the grand tour during the years 1754-1757.

In 1737, the London Magazine accused a growing number of dealers of “continually importing shiploads of deal Christs, Holy Families, Madonnas and other dark dismal objects” to these shores. This is only the tip of the iceberg, for the 18th century was the start of what we now know as the consumer society.

The legacy today is a fascinating area of collecting, a kind of retrospective search for souvenirs, not all of which are museum pieces or to be found in stately homes. Some continue to slip through the saleroom, and at prices even we can afford.

Today’s buyers of Grand Tour souvenirs should watch for micromosaic panels and jewelry made up of small fragments of colored stone, clay or glass; Italian carved shell cameos, of which Florence was an important center; Italian maiolica pottery; prints of Italian landscapes and topographical subjects; Sienna marble temple models from the Roman Forum; traveling trunks and other fitted luggage; books and maps; bronzes and paintings by lesser English artists, not forgetting the aforementioned Lot 1642.

While magnificent monumental marble sculptures (viz the Elgin Marbles), paintings and works of art were being transported to ports by mule to be shipped home by sea, collections of palm-size intaglio reliefs could be slipped inside a traveler’s luggage.

They were originally carved into the surface of precious and semiprecious stones and used to impress wax seals on letters and official documents but by the early 19th century, the white, cameo-like plaster reliefs were being produced on an almost industrial scale. 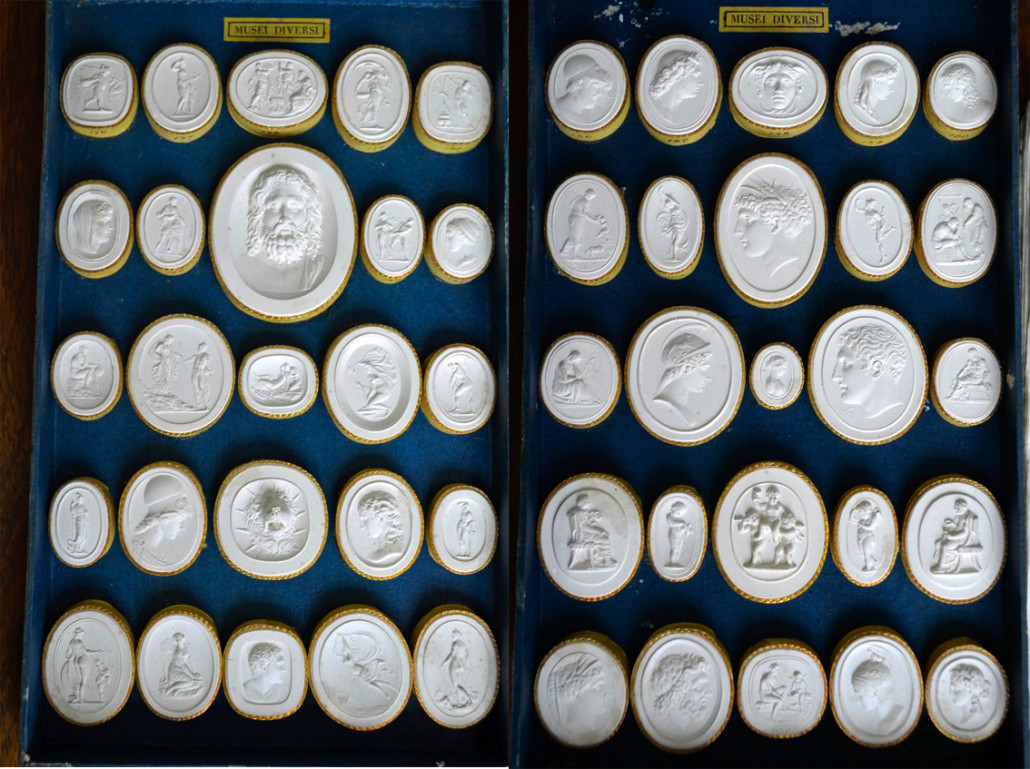 Ancient history in a box: Two trays from the nest of eight containing the plaster reliefs, all arranged symmetrically. Photo Ewbank’s auctioneers 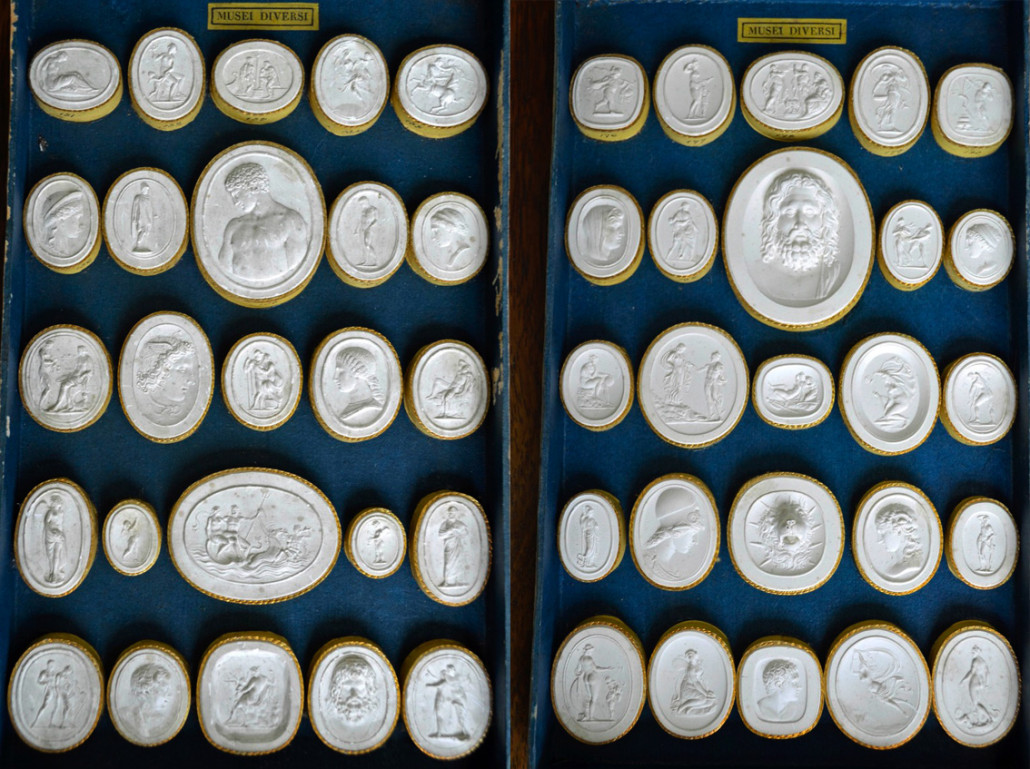 They depict famous buildings, monuments, Renaissance sculptures and other classical subjects copying the originals in museums along the grand tour route and were sold in sets with accompanying descriptions by merchants quick to spot the commercial opportunity.

However, they are becoming increasingly scarce today, particularly now interior designers have discovered them. While they were once sold in wooden cased sets or set into the thick pages of heavy leather-bound books, the fashion now is to hang them in framed groups as stylish wall coverings.

Prices have shot up accordingly.

Lot 1642 consisted of 200 of the reliefs and intaglios contained in a nest of eight boxes titled Musei Diversi. The set retained its hand-written catalog describing each piece.

It was offered with an estimate of £400-£600, but such was the strength of demand, the bidding spiralled to £2,400, paid appropriately by an Italian buyer looking to repatriate them.