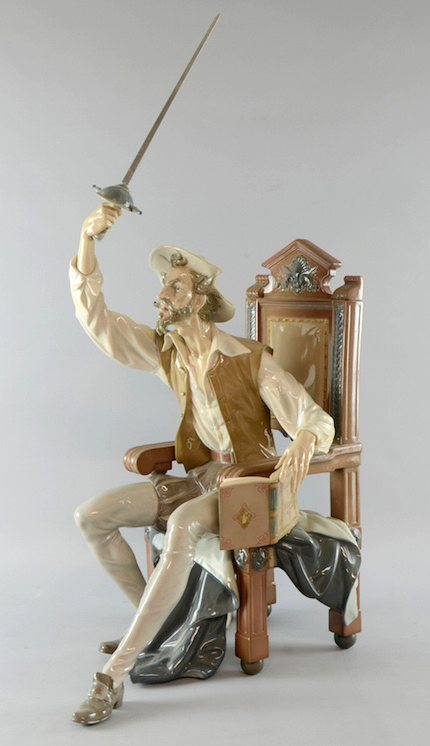 LONDON – Our respective parents were fond of Lladró porcelain, but then we don’t like Marmite. Or perhaps it’s just a generational thing. But before you go dismissing the schmaltzy products made by the Spanish company – it’s younger than I am – read on. It’s a fascinating story.

It starts with brothers Juan, José and Vicente Lladró, who lived in the village of Almàssera, near Valencia, an important center for porcelain and ceramic tile manufacture. Naturally enough, the older two of the three, Juan and José, found work as apprentices in a tile factory there, but they had bigger plans.

In 1951, they built a small Moorish-style kiln of their own, capable of producing tiles. Three or four years later, having built bigger and better kilns able to maintain temperatures capable of firing ceramics, they were selling their products, mostly vases, jugs and figurines, in a shop in town. Vincente was in charge of modeling, while his brothers handled the painting.

By the early 1960s they had built their first factory, growth happening so swiftly that the premises were outgrown time and time again.

After the sixth expansion it was decided that further growth required more space. A large site was acquired outside Valencia and a vast factory that became known as Porcelain City began production in 1969. It took two years to build.

By now exports of the figures that had become so popular, they were flooding into Europe and the U.S. In order to cope with demand, the brothers established their own training school to find and encourage new talent, which, the company continues today.

In the early days of production, it was only Vincente who had trained as a ceramic sculptor. However, he was quickly joined by a number of gifted others. Among them were Salvador Furiō, who concentrated on dogs and hunting scenes; Fulgencio Garcia, who introduced the elongated figures so loved by Lladró collectors and Juan Huerta, whose skills enabled him to model graceful nudes as readily as humorous animal groups that would feel welcome in a Disney cartoon.

Other names worth mentioning are Antonio Ramos, who modeled miniatures, many of which were animals and Salvador Debón, best know for his flower and bird groups and Japanese women.

Lladró is also distinctive for the various finishes to its products, which few other manufacturers can match. Aside from the usual gloss shine of classic glaze, figures are also found with matte finishes, while others have both in one piece.

In 1970, Lladró adopted a new material for its sculptures called Gres, which was developed by the company during 20 years of experimentation. Its recipe remains a closely guarded secret.

Although matte and unglazed like Victorian bisque porcelain, Gres figurines are produced using different methods and clay and have a satin-like sheen.

Some collectors buy only Gres pieces, which have the appearance of stoneware pottery, and hold them in great esteem. Like bisque, the material produces a finish, which mimics the look of flesh. It can be colored accordingly and is usually left unglazed.

One of the most technically remarkable aspects of Lladró is the treatment of costume. The clothing of Gres figurines is picked out in enamels but details like folds lack the subtlety of those models with classic glazed decoration, which produces more precise definition. However, the incredible detail of the lace in parasol, ruff or headdress is achieved in a completely different and hugely painstaking manner.

In each case, real lace or tulle is cut to form the appropriate shape, and sewn together in the same way the garment would be made by a dressmaker. The resulting pattern is then dipped in porcelain and fired, which causes the cloth to burn away in the intense heat of the kiln.

Frames and formers ensure that the desired shape is maintained during firing and that the finished porcelain items can be removed without damage, ready to be applied to the figure at the assembly stage.

A similar technique is required for flowers. Each tiny petal, leaf and stem is modeled and applied individually, making the process equally time consuming and labor intensive. These processes set Lladró apart from other figure makers.

Specialist modelers are employed to carry out the work, but there are inevitably failures during the firing process, so wastage is high, which goes some way to explaining the premium that must be paid for such finished pieces.

As is the case with other specialist ceramic figures, such as Royal Doulton and Worcester, it is limited editions, pieces withdrawn after short runs and figures with unusual color scemes that attract premium prices in the saleroom.

Unlike other ceramic figure manufacturers, however, Lladró’s products are painstakingly handmade and far from mass-produced. But in the end, it’s like Marmite: you either like them or loathe them.

Not everything in the Lladró garden was rosy, though. It appears that in the mid 1960s, three employees decided to break away from their parent company and set up on their own in a nearby factory. Products were of a much lower standard. The Lladró brothers saw this as a threat and set up a rival brand, called Rosal, to choke the opposition.

Legal action followed, which the brothers won, and promptly closed down the breakaway company. Rosal continued under Lladró’s control, subsequently changing the name in 1975 to Zaphir and moving to new, larger premises.

Zaphir subsequently became NAO, still a Lladró brand, distinguished, according to their website, “by the simplicity of their forms, lighthearted subject matters and colorful presentations”

All NAO pieces are created by a team of sculptors at Porcelain City and made at the company’s workshops in Xirivella, in Valencia. But they are not Lladró, so don’t be fooled when it comes to handing over hard cash.

And don’t be confused if you see the name “Daisa” on the base of Lladró figures. That’s the Lladró company which holds the intellectual property rights of the products.

All current and withdrawn Lladró pieces can be found in catalogs, which are also listed on the company’s website, in the “Historical Catalogue” in the case of the latter, and authenticity can be checked by comparing backstamps and incised logos, which are also illustrated there.

Lladró auction values are invariably fractions of retail costs for all but the rarest. These are some of the highlights from a large collection formed in the 1980s, dispersed last week. 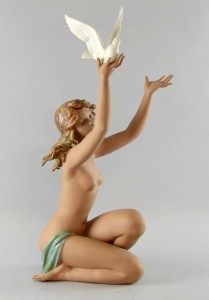 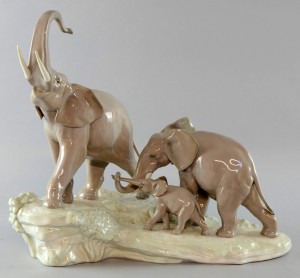 ‘Elephants Walking’ by Fulgencio García, introduced in 1971 and still in production. Sold for £160. Photo Ewbank’s Auctioneers 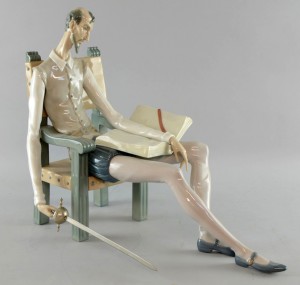 ‘Don Quixote,’ a figure sculpted by Salvador Furió, introduced in 1970 and still in production. Sold for £240. Photo Ewbank’s Auctioneers 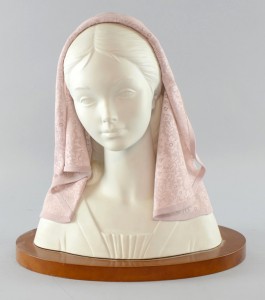 ‘Woman With Veil,’ sculptor unknown, introduced in 1988, withdrawn in 2005. The detail in the veil is amazing. Slightly damaged, it sold for £130. Photo Ewbank’s Auctioneers 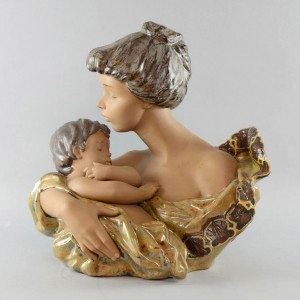 ‘Cherish,’ a Gres figure of a mother and child by José Luis Alvarez. It was introduced in 1992 and withdrawn in 2008. Sold for £340. Photo Ewbank’s Auctioneers 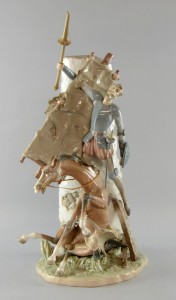 ‘Don Quixote and the Windmill’ by Salvador Furió, introduced in 1986 and withdrawn in 1996. Sold for £700. Photo Ewbank’s Auctioneers

What’s so special about cinnabar? You won’t believe this price