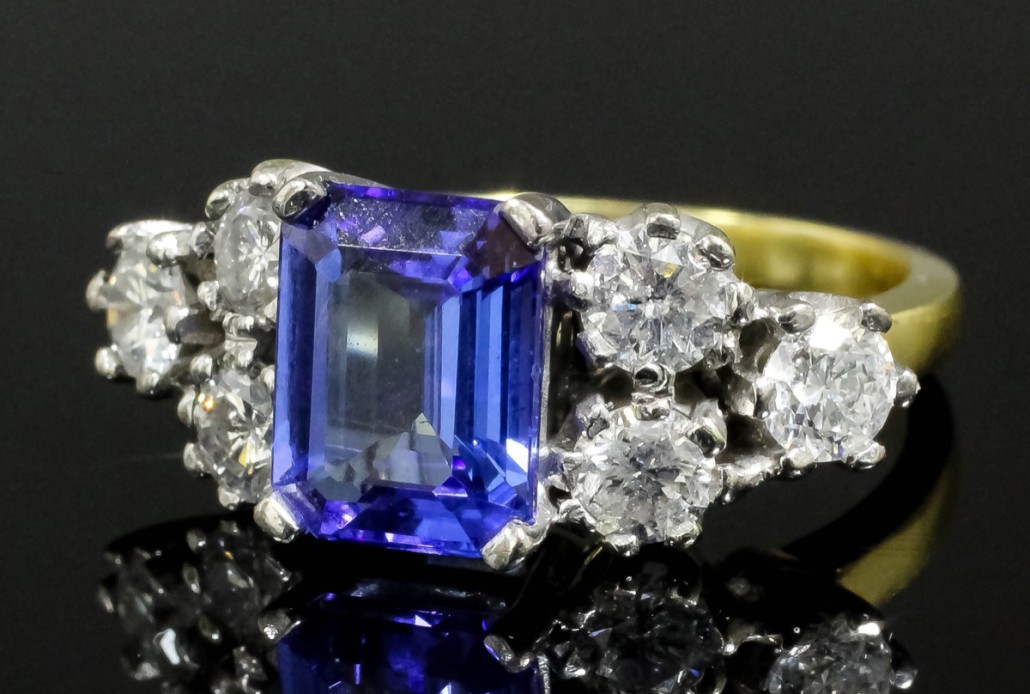 LONDON – Our bejewelled friend suggested we take a look at a particular TV shopping channel. Broadcasting 24 hours a day, seven days a week all year round, it’s a cornucopia of glitzy jewelry, featuring gemstones sourced direct from the mines at bargain basement prices. She said we might learn something.

It had certainly worked for our friend. A customer for several years, she had built a substantial collection of highly wearable rings and bracelets, and it hadn’t broken the bank. More importantly, though, she has become something of an armchair gemmology expert.

So we tuned in. True, the presenters babbling incessantly, almost without pausing for breath, can quickly wear thin. But if you go beyond the nonstop, hard-sell commercialism, it soon became apparent that gemmology can be a fascinating topic for the amateur collector. 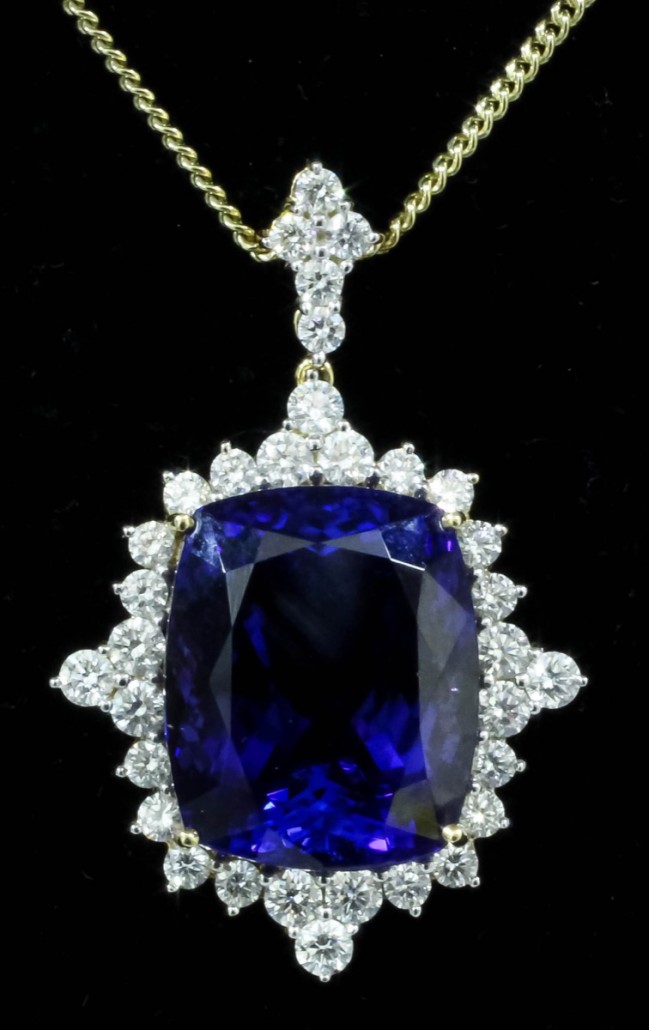 An 18K gold-mounted pendant, the oval cut tanzanite weighing approximately 29 carats, surrounded by 33 small brilliant-cut diamonds. Accompanied by a certificate confirming the tanzanite to be AAA quality, it sold for £3,600. Photo The Canterbury Auction Galleries

It helps that the presenters appear to know what they’re talking about, indeed, one we listened to said she was in the middle of exams to gain an internationally recognised gemmological qualification. Would we buy from it? Probably not, but with the 30-day, no quibble, money-back guarantee the channel offers, there seems no reason not to.

It was the stories behind the gems being sold that interested me most, particularly one found only in one location in the world and said to be many times rarer than diamonds: tanzanite and yes, it comes from Tanzania.

How it came to be discovered, marketed so successfully and now in increasingly short supply makes for fascinating, yet sobering, reading. The scarcer it becomes, the more likely the beautiful deep blue stone is to be faked by the unscrupulous.

Tanzanite is actually a variety of a mineral called zoisite. It ranges in color from blue, purple, green, brown, pink, yellow, gray or colorless, and was first found as far back as the 1800s, but tanzanite is special. 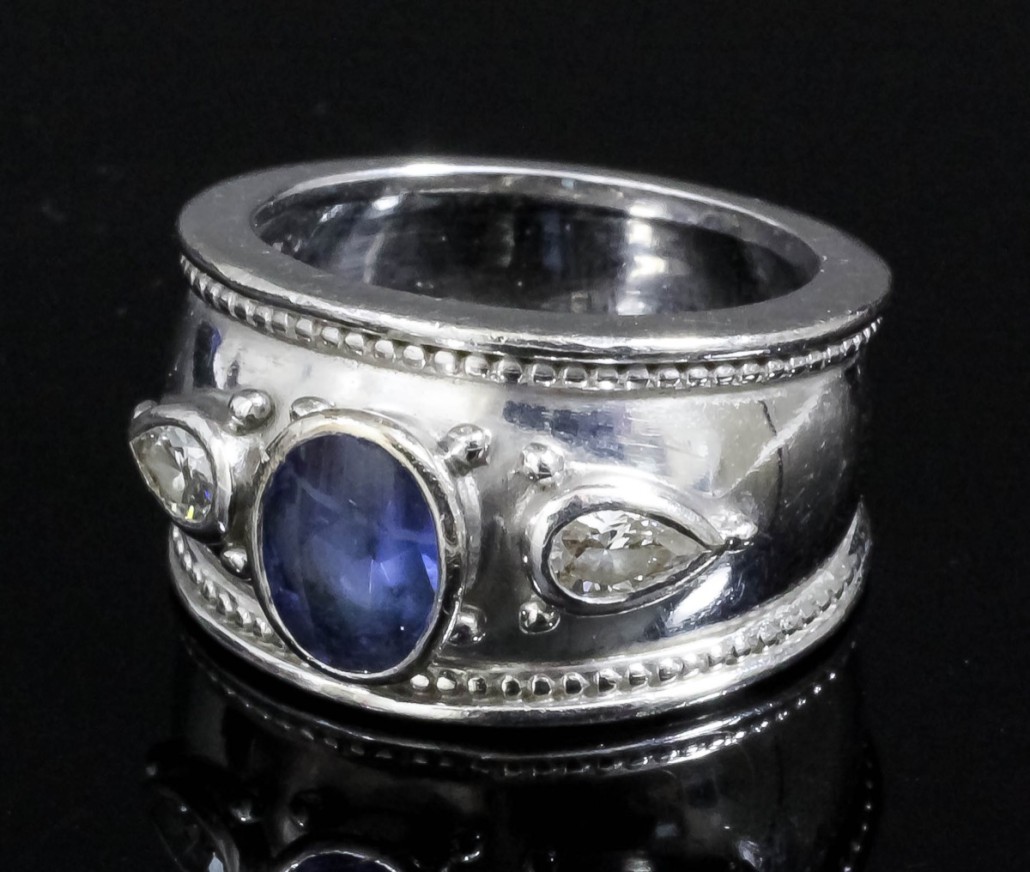 A dress ring mounted in 18K white gold by Theo Fennell, the oval-cut tanzanite of approximately 1.2 carats flanked by small pear-cut diamonds. It sold for £1,000. Photo The Canterbury Auction Galleries

It’s a gem-quality zoisite ranging in color from deep blue to burgundy red through violet and purple and several gem hunters have claimed they were the first to find it.

It was discovered in the Mererani hills in the shadow of Mount Kilimanjaro, Northern Tanzania, as recently at 1967. It was formed probably by an eruption from the volcano, perhaps 500 million years ago.

An Indian tailor called Manuel de Souza, “Mad Manuel” as he was known, was an amateur prospector who made and mended clothes to pay his way around Africa searching for deposits of gold, rubies and diamonds.

In those early days fragments of the gem could be found lying on the ground, which is how Manuel stumbled across what he first believed to be sapphire. Although treacly-brown in its raw state, it is thought that heat from a huge grass fire had turned the deposits into a bright violet blue. 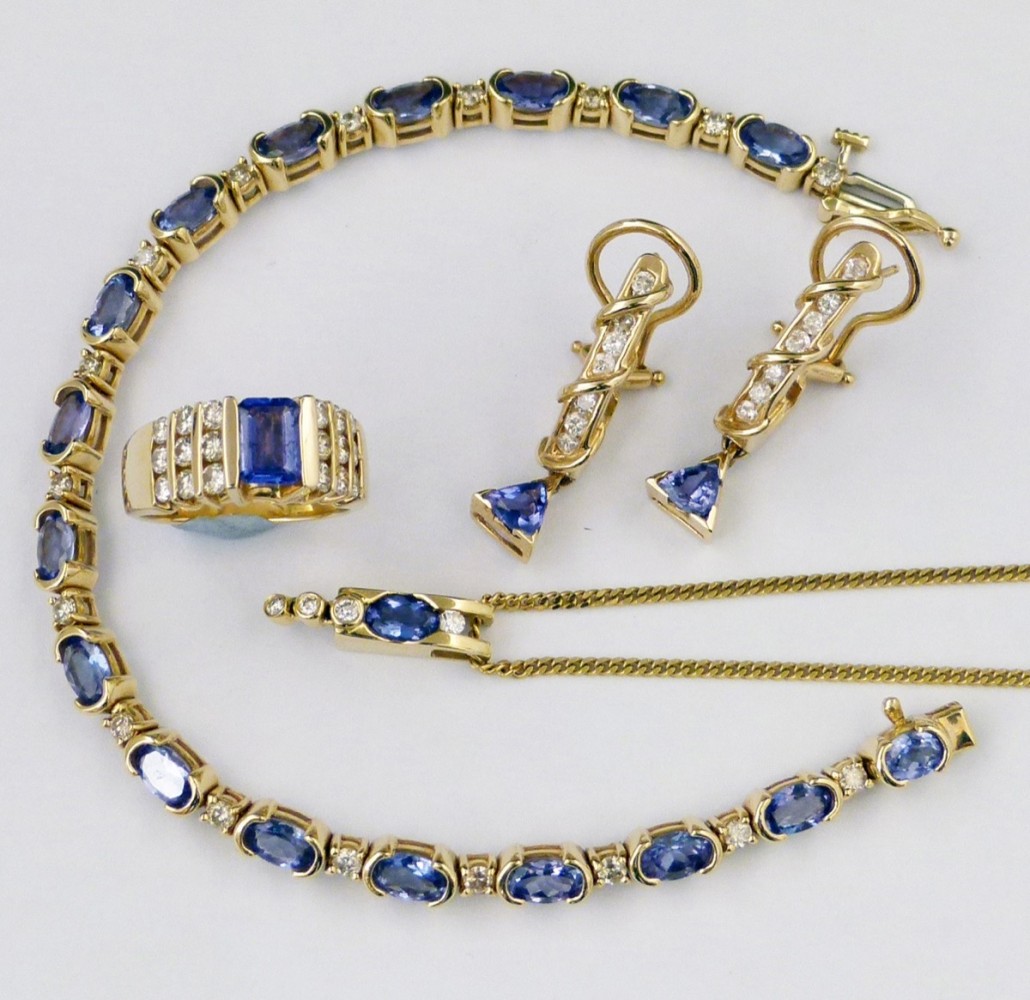 A suite of tanzanite jewelry comprising a line bracelet interspersed by point diamonds; a pair of drop earrings; a ring; and a pendant on a chain, all in 14K gold, sold for £460. Photo Peter Wilson Auctioneers

After registering a claim to mine the area, he showed samples to Dr. John Saul, a geologist based at the time in Nairobi. He in turn sent them to his father, Hyman Saul, who just happened to be vice-president of top New York department store Saks Fifth Avenue.

Saul Snr subsequently showed the gems to Henry Platt, the great grandson of Louis Comfort Tiffany, and Walter Hoving, president of the world famous jewelers and the rest, as they say, is history.

By then officially identified as zoisite by the august Gemmological Institute of America, the gem was named tanzanite by Hoving in honor of its country of origin. It was launched by Tiffany with a range of jewellery in 1978 amid great fanfare as “the most beautiful blue stone discovered in over 2,000 years.”

The imagination of jewelry buyers was instantly fired. Global sales skyrocketed and in 1998 and 1999, tanzanite was declared the world’s most popular colored gemstone. In 2002, it was adopted as the birthstone for December in the first change to the official list since 1912, boosting sales still further.

Tanzanite remains among the top 10 best sellers in the international gem market, but the mines producing it are situated in a tiny area of about eight square miles and they remain the only known source in the world. It is feared they will be worked out in less than 50 years. 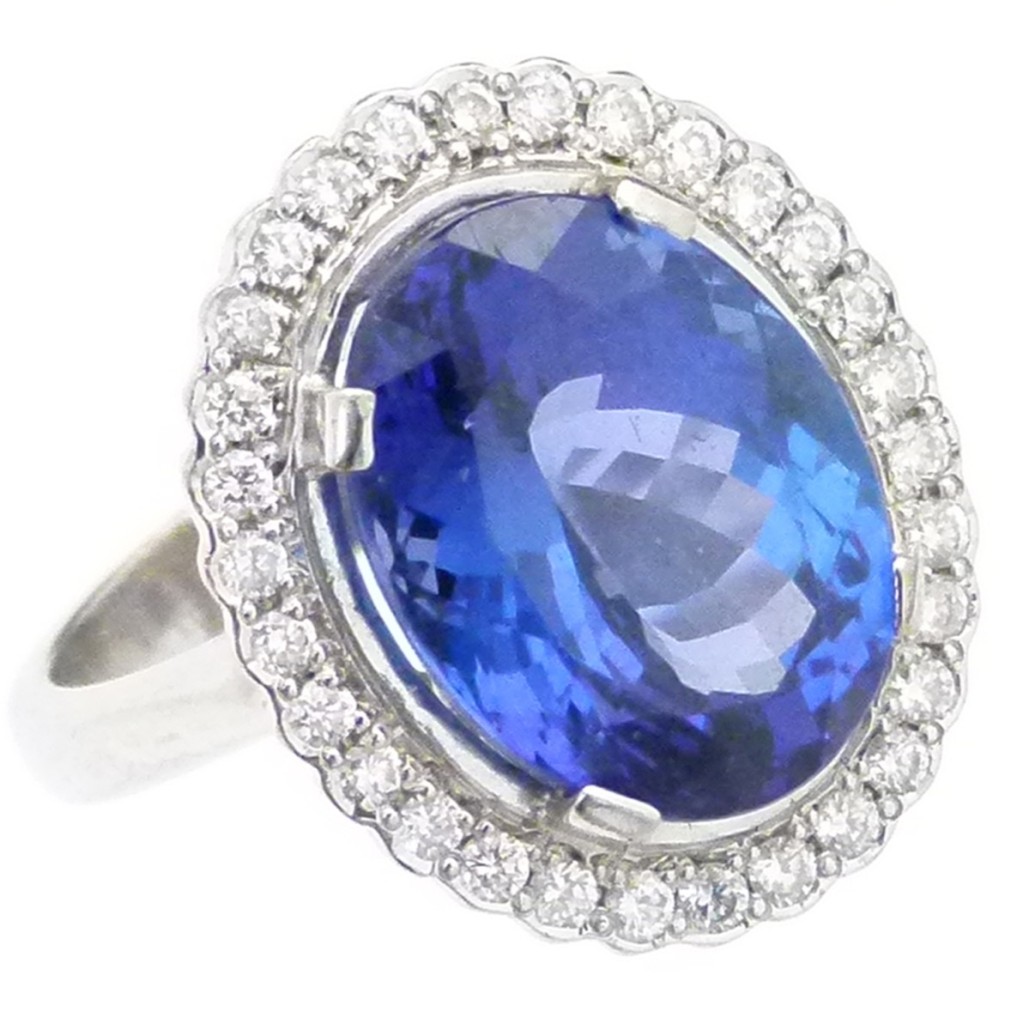 Regrettably, scarcity means higher prices but worse, it has created a draw for the unscrupulous to get rich quick.

In its raw state, the dominant of three colors that make up tanzanite is brown. When it is heated in gemmological ovens, the brown is removed, leaving the blue and violet dominant and as might be expected, the deeper the blue, the greater the value.

This is an accepted process and virtually all the mineral goes through it before it is worked into jewelry. Without it, the beautiful blues for which the gem is treasured would not occur.

Unlike some gems, there is as yet no synthetic process capable of producing natural tanzanite. Should that ever be made possible, reputable dealers would identify any stones that were not natural, as is the case with, for example, rubies and emeralds made in the lab. 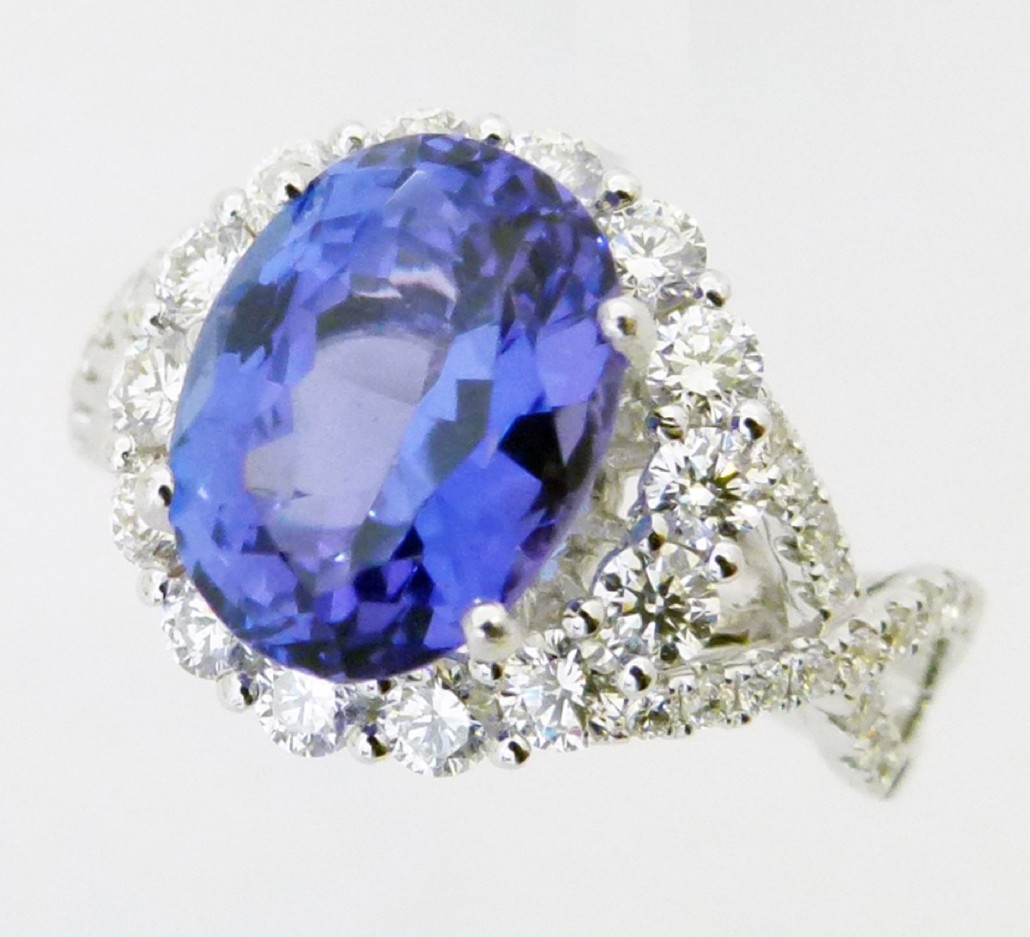 There is no shortage of imitations, however. Cubic zirconia (CZ) best known as a diamond substitute, is now being produced to look like tanzanite, as are other manufactured materials such as laboratory-grown forsterite, coranite, tanavyte, corundum garnet and spinel.

With supplies dwindling, prices rising and demand surging, even blue glass has been passed off as tanzanite. The latest wheeze is to enhance the color of pale tanzanite with a coating of cobalt, which only a highly experienced specialist is able to spot.

Over time the covering is prone to wear, particularly on the edges of stones’ facets, but by then it’s too late.

The answer, of course, is to buy only from reliable sources you can trust. In every case, you should insist on a guarantee from the seller in the form of a written certificate and, where possible, one that quotes a gem’s position on an official tanzanite quality grading scale such as that used for diamonds covering the three C’s: color, clarity and cut.
___