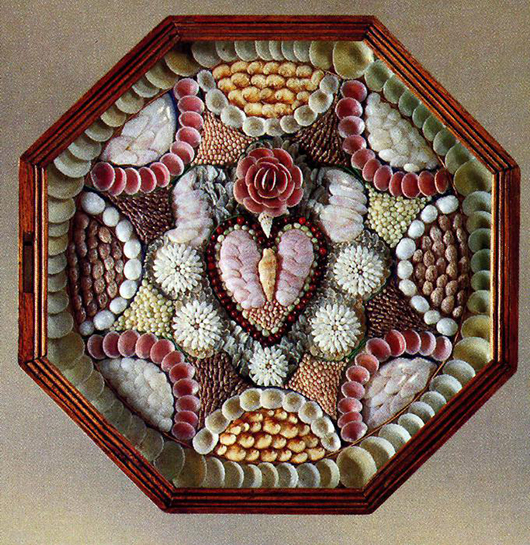 LONDON – Fate found us in Florida for the Christmas and New Year holiday, yet far from the madding Disney crowds. I wrote this with one eye on the sun setting over a nearly deserted beach.

The only crowds there are the shell collectors, out in numbers of at least a dozen after high tide, all bent double searching for that elusive rarity, each equipped with a so-called Florida snow shovel, actually a riddle with a long handle, which takes much of the effort out of sifting through the sand.

It’s not for me. There are two obvious groups of shell collectors: those who find their own, and those who buy from shops and dealers at fairs and trade shows. I remain in the latter camp, but the difference is, I buy only old shells and objects decorated with them. For the most part, it’s an inexpensive hobby with a great deal of scope.

The seashell appears in art right from the days when cavemen first began to paint and draw. Indeed, only last month a mussel shell, was found in Java, decorated half a million years ago. It has a scratched zigzag line and was described by Colin Renfrew, an archaeologist at the University of Cambridge, as “the earliest abstract decoration in the world.”

Since then, artists, silversmiths, jewelers, cabinetmakers, ceramicists, even armourers have used the shell motif to decorate the objects they make. Furniture maker George Hepplewhite’s satinwood conch shell trademark is one of the most readily recognised.

The Victorians were great shell collectors. In fact, they were great collectors of just about anything related to natural history and science, and they revelled in the hobby of creating works of art using found objects. Being inveterate travelers, shell collecting became a universal pastime.

Tons of the things must have been brought back to England from trips abroad and it was not long before shells moved from collectors’ cabinets to be used as a means of decorating homes. In simple terms, this resulted in the appearance of framed pictures made from shells or fire screens and other decorative panels in which shells were arranged in striking geometric patterns.

In extreme cases, the rich owners of grand homes would have an entire room turned into a grotto, the walls of which were covered from floor to ceiling with sea shells.

Sea and marine-related antiques are sources of much to fascinate the collector. One of the first things we acquired when just starting out was a picture made from seaweed, while still on our wish list is one made from sand. The best-known sand artist is Benjamin Zobel (1762-1831) the son of a German confectioner, who became a “table decker” for the mad King George III.

Zobel’s pictures replaced tablecloths at banquets, but the art was transient. Each day, and a little more insane, the king would view Zobel’s latest masterpieces and then ruffle them up and make him start all over again.

Far longer lasting were the shell arrangements made from do-it-yourself kits intended for bored Victorian ladies. Often sizeable displays can still be found, saved for posterity under glass domes, which have served to protect the delicate creations from dust and certain destruction through careless handling. In the same family as arrangements of exotic stuffed birds, they are not to everyone’s liking and can therefore be found at affordable prices.

It’s perhaps too early to mention Valentine’s Day, but easily the best shell arrangements are those made, reputedly at least, by sailors for their sweethearts. They date mostly from about 1860 and are invariably housed in unassuming folding octagonal boxes, usually made from mahogany.

From the exterior, they look like something a fisherman might use to keep his line or artificial flies safe or perhaps a surgeon for his precious instruments. Once opened, however, they are a stunningly colorful and attractive keepsake that tends to remain in a family and be passed down from generation to generation.

One we saw sold recently was a case in point. It was discovered in a cupboard drawer by a family following the death of an elderly relative. The man’s great-grandfather had spent his life at sea and the family was surprised when it fetched £680. Similar to the examples illustrated, it was made up of shells arranged in geometric patterns of contrasting colors, centred by a crimson heart surmounted by a white rose.

The best, though, are those with touching epithets such as “For My Love” or “For The One I Love” spelled out in tiny shells of contrasting color as part of the design. Clearly intended as souvenirs for the sailor with a girl in every port, they were made probably by crafters in Barbados and the West Indies, rather than the bored shipmates on long voyages who inhabit Victorian tall tales.

We began talking to one collector on the beach who was supplementing her income by selling what she found to local shell shops. One of her most lucrative shells was the appropriately named sand dollar, which is popular with tourists because of its markings. The markings are seen by some as religious symbols.

According to legend, she explained, the sand dollar is also called the Holy Ghost Shell and is said to tell the story of the birth, crucifixion and resurrection of Christ.

At the center of the uppermost side of the disk-shape shell is a five-pointed star representing the star of Bethlehem, which led the three wise men to Jesus’ birthplace, while lines seemingly etched into the top surface around it resemble the Easter lily.

Five oval holes found in every shell represent the wounds Christ suffered on the cross, four smaller ones for the nails to His hands and feet, and the larger fifth, the wound inflicted by the Roman soldier’s spear.

The underside of the shell is marked with the outline of the Christmas flower, the Poinsettia, and if broken open, the sand dollar’s teeth are found arranged in the shape of a star.

Individually, these small pieces resemble white doves in flight, which some believe represent the angels who sang to the shepherd on Christmas morning.

One word of warning for holiday-making would-be shell collectors: regulations laid down by CITES, the Convention on International Trade in Endangered Species of Wild Fauna and Flora, both control and prevent the gathering, importing and exporting of some types of shells. Collect antique examples instead. 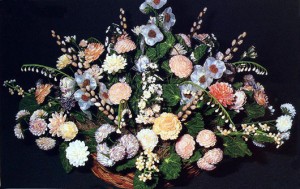 We saw this amazing floral display for sale in one of the many shell shops here. It was prices at $3,500, or about £2,250. Photo: Christopher Proudlove

This shell is over 100 years old and has been turned into a perfume bottle with the addition of a silver topped vial set in its central core. It has a saleroom value of £400-£600. Photo: Woolley & Wallis Auctioneers 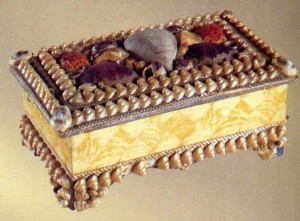 Jewelry boxes set with seashells were popular with Victorian women. This example is worth £30-£50. Photo: Christopher Proudlove 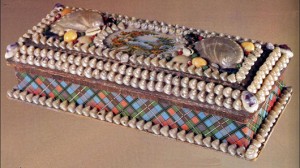 An earlier shell-set jewelry or pen box decorated with tartan paper as a Scottish souvenir. It’s worth £40-£60. Photo: Ewbanks Auctioneers 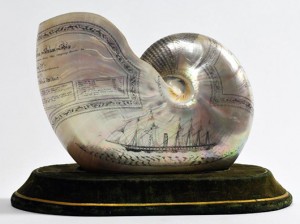 A rare engraved nautilus shell by Charles Wood, made to commemorate the launching of the Great Britain iron steamship by Prince Albert, on July 19, 1843. It sold for £760. Photo: The Canterbury Auction Galleries 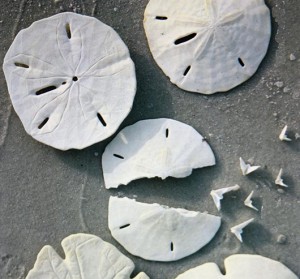 Sand dollars we found on the beach, with one broken open to show the ‘angels.’ Photo: Christopher Proudlove