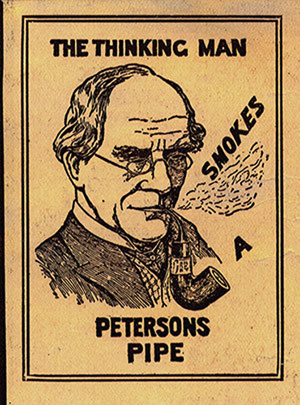 LONDON – I smoked my first cigarette, a Woodbine, in the coal shed, aged seven. A few years later, I surreptitiously took my pocket money and visited the tobacconist in town. Whether or not he believed my story about buying my uncle a pipe, I have no idea, but he ended up with it anyway after my mother discovered it and boxed my ears.

I recall with some satisfaction, however, that he told her I should be congratulated for my good taste. It was a Peterson with a hallmarked silver cap where the mouthpiece enters the body of the pipe. It also had a patented mouthpiece, designed to take the smoke away from the tongue, and a “dry system” body. This features a small reservoir, the purpose of which is to collect moisture and create a drier, cooler smoke.

All this was lost on a schoolboy, but not the world’s veteran smokers. Soon politicians, business leaders, members of the clergy, armed forces, sportsmen, artists and writers were sporting Peterson pipes. Indeed, Conan Doyle gave his Sherlock Holmes a curve-stemmed Peterson, while the advertising slogan writers coined it “thinking man’s smoke.”

The Dublin company continues to sell pipes worldwide, the U.S. being its best customer. Its earlier products are now covetable collectors’ items. It was founded as a tobacconist by German immigrant brothers Friedrich and Heinrich Kapp in Grafton Street, Dublin, in 1865.

Latvian immigrant Charles Paterson joined them that same year with the promise that his talent as a master pipe craftsmen would have discerning smokers beating a path to their door. Paterson invented his dry system in 1890 and his patent mouthpiece in 1898. Both remain in production. The idea that I bought one as a boy still gives me pleasure, despite being a reformed smoker.

Today, as the country wrestles with the anti-smoking lobby and calls for bans on e-cigarettes, more are collecting the accoutrements associated with the habit. I call it smokiana. The list of possible subjects is endless: there are match holders; ashtrays; tobacco and match boxes; lighters; cigarette and cigar holders; vesta cases and so on. Or you could simply choose to collect the oldest of all smoking relics – the pipe itself.

Even here the possibilities are enormous but if it’s an inexpensive collection you’re after, go for 19th century clay pipes. I’ve dug them up in the garden and they don’t come cheaper than that. If you’re prepared to spend £15-£20 apiece, there are some smashing antique clay pipes to be found.

They range from the long and elegant churchwarden type to those of particular historical interest. These latter have bowls decorated with likenesses of the famous. Disraeli, Queen Victoria (especially amusing since she banned smoking within the precincts of Windsor Castle) and Gladstone have all been immortalised on clay pipes.

Kings among clay pipes, however, are actually those carved from a stone called meerschaum, a German word which means “foam of the sea.” For the technical, the creamy white and very soft material is hydrous silicate of magnesium which is found in bands of strata, much like the clay in your garden. Unlike clay pipes, however, you won’t find any should you start digging. The main source of the mineral is Turkey.

Quick to capitalize on its good fortune, Turkey began exporting the mineral to centres such as Austria, Hungary and in particular Vienna, where craftsmen carved a reputation for their skill.

Key to the success of meerschaum is the ease with which it can be shaped and carved. Note the present tense. The industry still exists in Turkey and new meerschaums can still be bought in the shops. Pipes produced between 1820-1900, the period of most interest to collectors, feature carving of the highest quality that will never be repeated.

The stone was first cut with hand saws and then shaped and carved in the most intricate and delicate fashion imaginable. Favorite subjects include Gainsborough ladies of voluptuous proportions, mermaids, actresses, birds and animals; macabre skull and crossbones; and skeletons.

Once carved, the pipe was polished with sandpaper, pumice and French chalk, the final shine being made possible following immersion in hot wax. The usual mouthpiece for a meerschaum was fashioned from amber, a fossil resin found notably on the Baltic coast of Prussia and also used to make jewelry.

Like cheap and cheerful clay pipes, however, their drawback was extreme fragility. Generally they were fitted in plush-lined leather cases to help protect them. This added to their luxury appeal in fashionable Victorian smoking circles.

Connoisseur collectors today demand total absence of damage and perfect coloring that, like patination on old oak furniture, comes with age. A meerschaum pipe is creamy coloured when it leaves its maker; chemicals it contains combine with the wax polish when it is smoked to turn it a rich orange brown color. Prices start from around £40.

London tobacconist Alfred Dunhill is a darling of the smoking collectors’ circuit. His company made some of the most desirable smoking–related collectors’ items that money can buy, notably his unique cigarette lighters.

Dunhill of St James’s started making lighters just before the First World War, in competition, among others, with Colibri, founded by Julius Lowenthal and American Louis V Aronson’s Ronson Company. By the 1930s, they were supplying some of the most luxurious to a distinguished and sophisticated clientele.

During the Depression, cigarettes, like alcohol and cigar and pipe tobacco, came to be regarded as luxury items affordable only by the well-heeled. Cigarette lighters mirrored this and became ever more the fashion accessory of the rich.

Increasingly, they became larger and more showy, often being retailed as one component in a luxury smoker’s set. Designs became individual and flashy and the company’s plush catalogues listed expensive pocket and table lighters that were must-haves.

Among the most stylish were grand table lighters in 9 karat gold or silver including one shaped like a small ball and another that included a wristwatch-sized clock with eight-day movement.

In an amusing play on designs, Dunhill also manufactured a silver plate table lighter called the Giant Unique which was identical in shape to a pocket lighter – but about 10 times bigger. 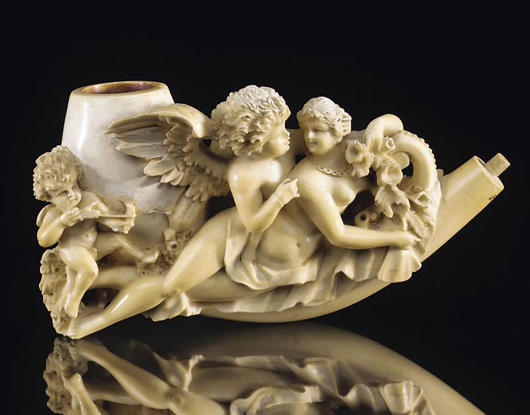 A fine meerschaum pipe bowl dating from 1880 and modeled with Cupid seducing a reclining nude. It’s worth £500-800. Photo: Christie’s Images 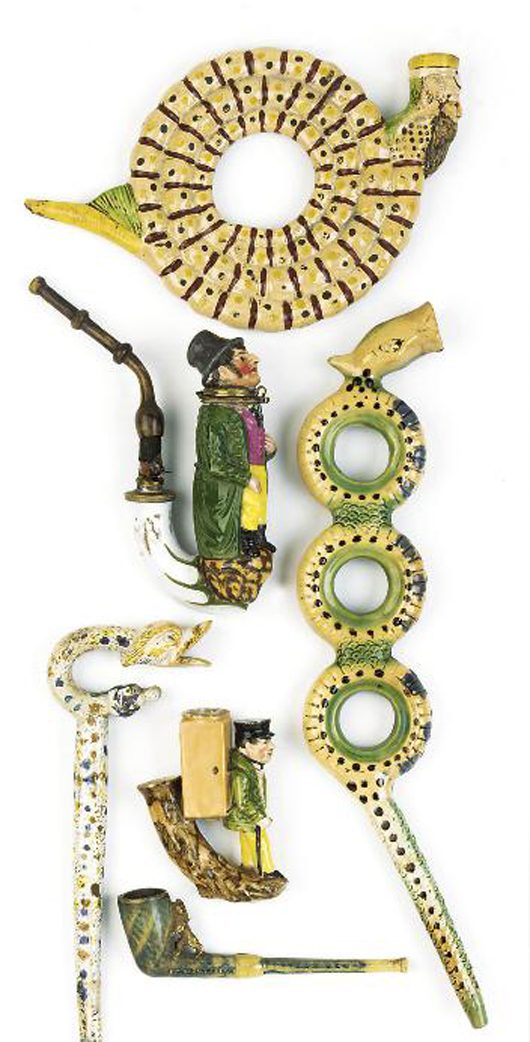 A group of Staffordshire novelty Pratt-style earthenware and porcelain pipes dating from the early 19th century. The example shaped liked a coiled serpent with human head (top) and the one modeled with a swan’s head above the bust of a woman (bottom left) are particularly rare. Each is worth £300-400. Photo Christie’s Images 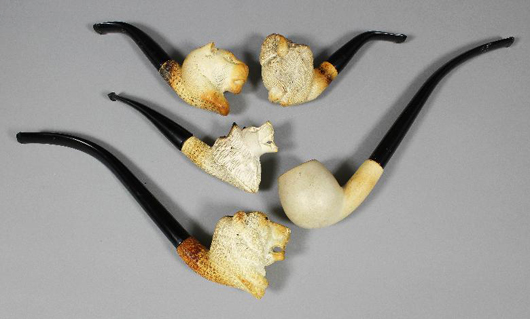 A group of barely used 20th century meerschaum pipes, carved respectively with the heads of a leopard, bison, lion and grizzly bear, the latter with churchwarden stem; the fifth plain, all with fitted cases. They sold together for £160. Photo: The Canterbury Auction Galleries 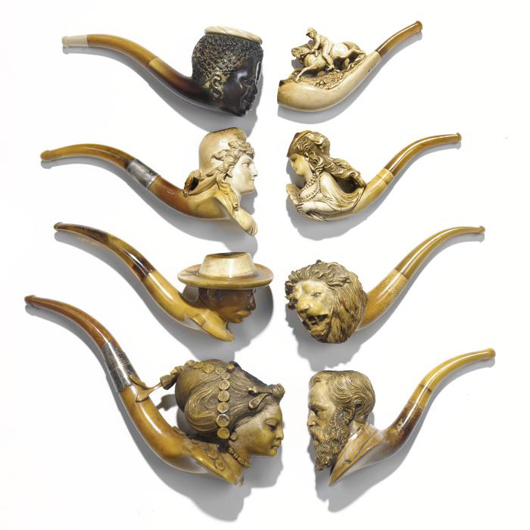 These German and Austrian meerschaum pipes have amber stems and are variously carved with human heads and animals. Saleroom estimates for each range from £100-300. Photo: Christie’s Images 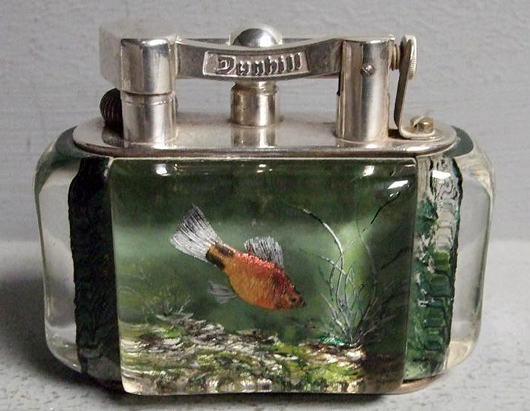 A Dunhill ‘Aquarium’ table petrol lighter, circa 1950, the clear body decorated in reverse with fish among aquatic foliage. It sold for £1,500. Photo: Ewbank’s Auctions