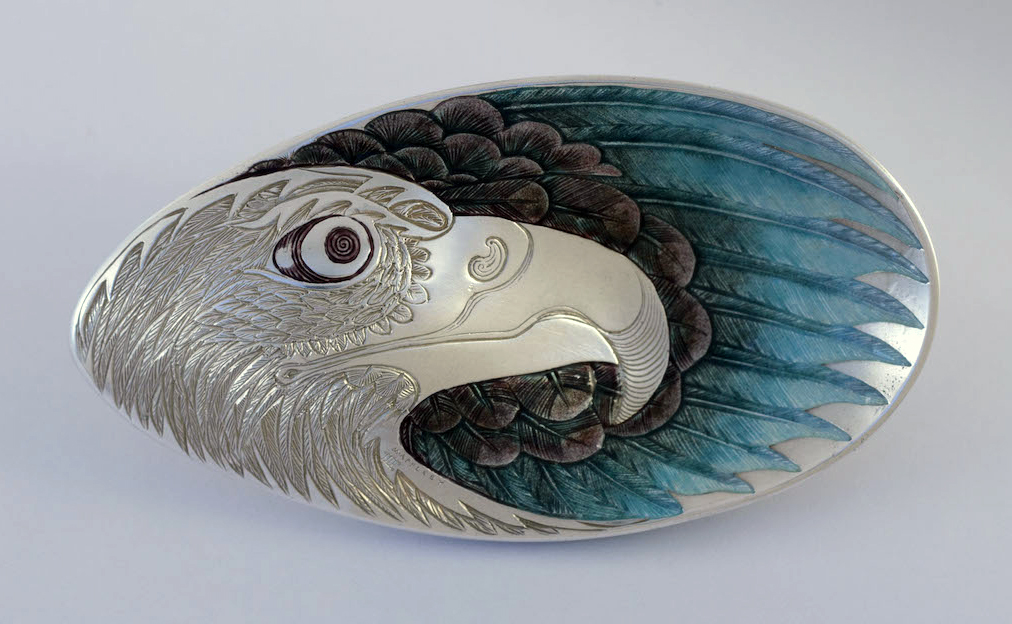 LONDON – Why are spoons for tea caddies often shaped like little scallop shells? Indeed, how come the boxes we keep our tea in called caddies in the first place? The answers to these and other caddy spoon-related questions will be found by visiting Antiques for Everyone, the spring season collectors’ bonanza at Birmingham’s National Exhibition Centre this weekend. Or, you could read on. I suggest you do both.

An exhibition at the fair, presented by the Society of Caddy Spoon Collectors, seeks to trace the development of these beautiful and collectable utilitarian objects from their introduction to the present day.

A George III spoon with shell bowl by Nathaniel Smith & Co. (Sheffield, 1793) will be priced £495 at the fair by Mary Cooke Antiques. 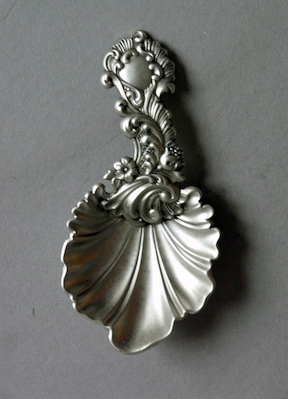 While tea was popular in China as long ago as the seventh century, it took another 1,000 years before European connoisseurs were able to sample its delights, but only if they were rich enough to afford it. Tea traders grew rich on the proceeds of exports, but only after the brew had been tasted. Scallop shells, which would have been prolific around dockside warehouses, proved ideal for scooping out a sample and were often discarded in the tea chests prior to shipping. Their discovery back in Europe was enough to start a fashion.

A spoon modeled as a hand by Joseph Taylor (Birmingham 1806). 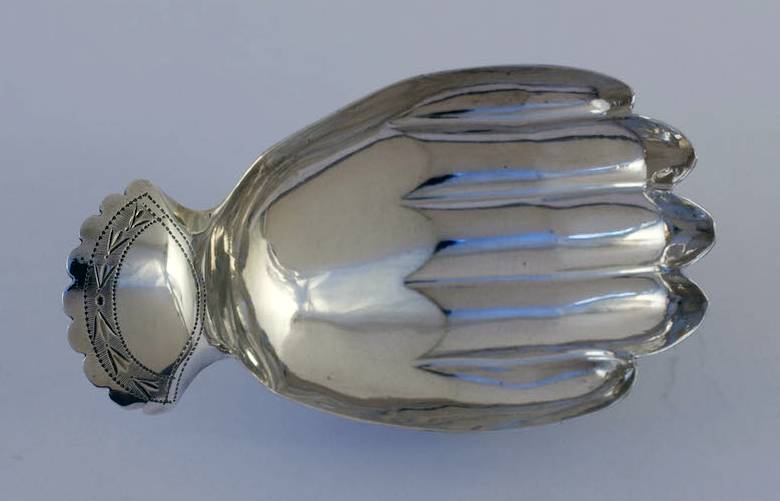 The East India Company’s monopoly on tea trading, which was not lifted until 1833, and the government’s heavy import duties, meant tea was available only to the rich. In 1665, Thomas Garway a tobacconist, and tea and coffee retailer in Exchange Alley, near the Royal Exchange, advertised tea for sale for the equivalent today of around £100 per pound of weight. Such was its value, it was only sensible to keep tea under lock and key away from pilfering servants in a box that took its name from the Malay kati, a unit of weight for tea, of approximately 1 1/3 pounds.

A spoon with vine leaf and grape decoration by Joseph Wilmore (Birmingham 1808). 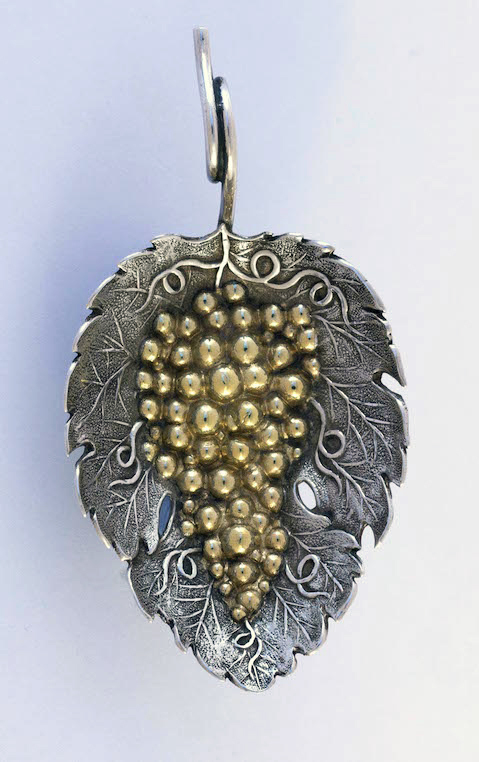 As the popularity of this refined new drink spiraled, a veritable industry blossomed with it producing accompanying implements and accessories designed to make the enjoyment a yet more special social occasion. Caddies were produced in exotic materials and designs but all had common features: two lidded compartments lined with thin foil or paper for black and green tea respectively, each capable of holding holding a kati of tea, and a glass bowl for blending the two. =A shovel-style spoon with bone handle by Bragg & Crockett (Birmingham 1810). 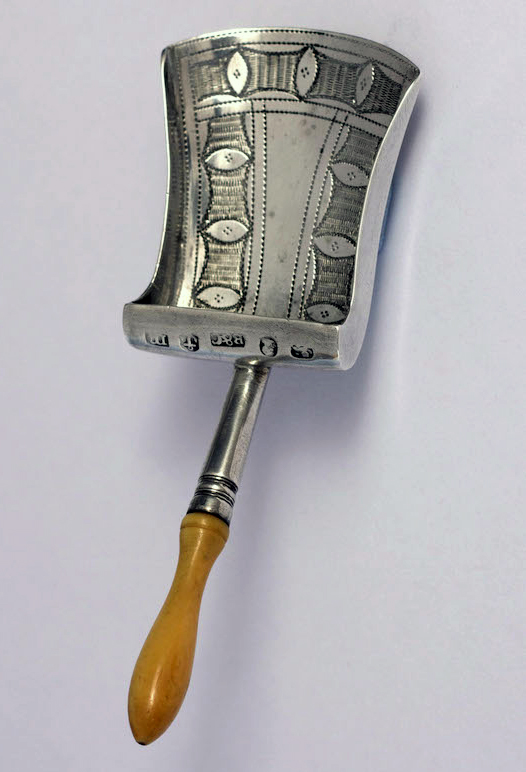 The measurement of how much loose tea to use was important to avoid waste, so the purpose-designed utensil, the caddy spoon, appeared in the 1770s, but not simply to transport tea from caddy to teapot. Fine silver and porcelain impressed guests and an elaborate caddy spoon in precious metal was further proof the wealth and social standing of the owner. This is a highly collectable field and the attraction of a particular spoon may be a reflection of its beauty or rarity, or both. A plain silver spoon by a Scottish provincial maker can often be as desirable and sought-after as an elaborate example.

Famous silversmiths and craftsmen of each period devoted time and energy to the production of these small objects. As the 20th century approached, caddy spoon design followed the artistic movements of the period from Art Nouveau to Arts & Crafts and Art Deco.

British names such as Omar Ramsden, Liberty, A.E. Jones and H.G. Murphy all designed spoons, while the Danish silversmith Georg Jensen and Norway’s David Andersen were famed on the Continent. In the U.S.A., Tiffany and Gorham produced a stream of high quality spoons.

The majority of the spoons in the exhibition will be British, underlining this country’s tea-drinking heritage, but other countries in Europe and beyond will also be represented. The evolution of styles and shapes will be illustrated by examples from the early shell bowls and their Oriental influences, through those mirroring the designs of flatware table silver and fashions of the day.

Fanciful novelty shapes, such as those modeled as an eagle’s wing or jockey’s cap by Joseph Taylor (Birmingham 1798) will also be on display. 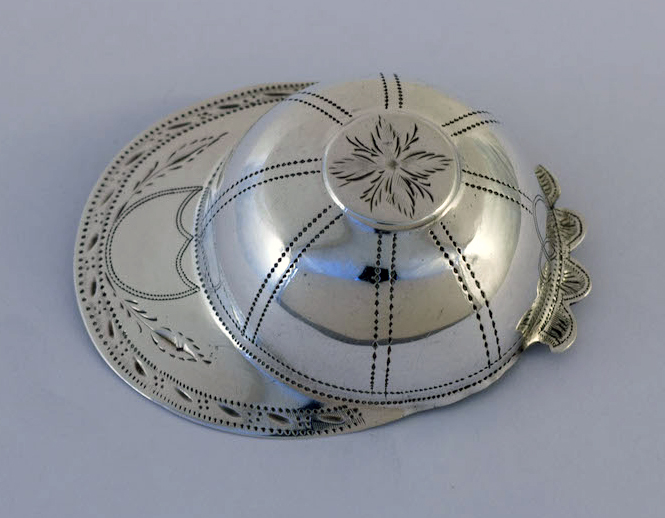 Naturally, most are made of silver, which is sometimes embellished with gilding, enamel, niello and plique a jour decoration. Others will be from the famous alternative to silver: old Sheffield plate, while examples in porcelain, gold, ivory, pottery, glass, treen, mother of pearl, tortoiseshell and other materials will also be on display. =An ornate shell-shaped spoon by George Unite (Birmingham 1900). 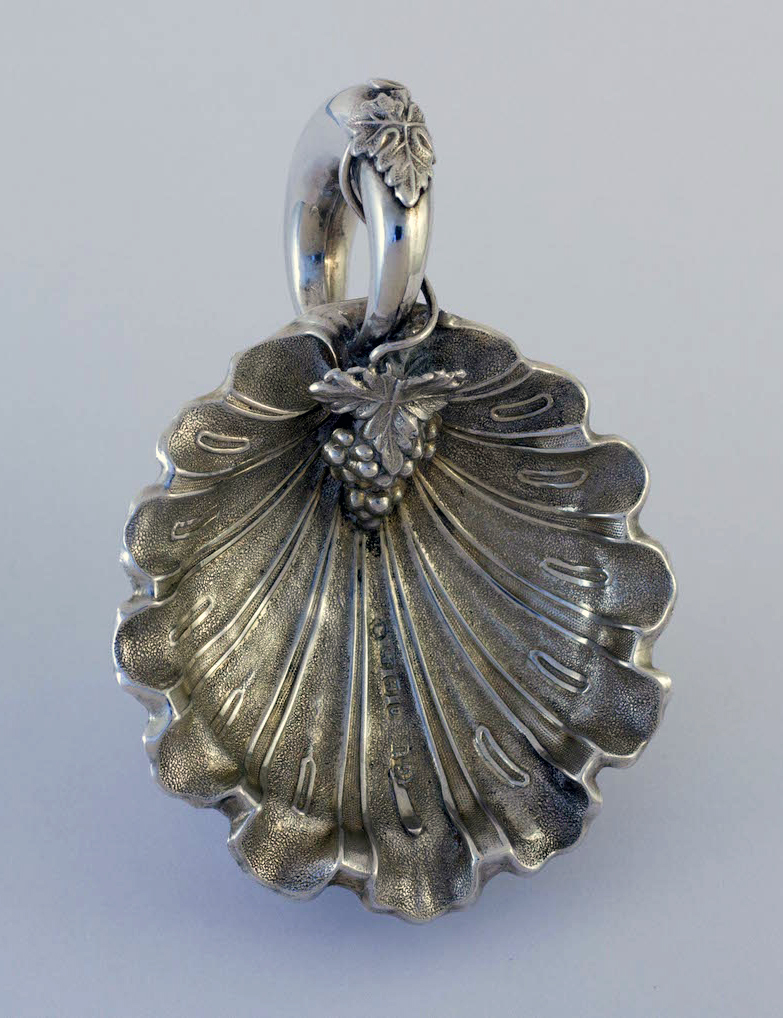 Traditional forms of the caddy spoon continued to be made in pre-Revolution Russia and the exhibition will include a number of such examples together with those with decoration illustrating regional differences across the continent. In the postwar years, caddy spoons continued to attract attention from silversmiths, sometimes for commemorative purposes. Fine examples will be on display by Stuart Devlin, Alex Styles and Gerald Benney, among others. The art of the designer-silversmith continues to flourish today. While many of us now use tea bags and the utilitarian function of the caddy spoon has diminished, the caddy spoon has not disappeared, far from it.

A contemporary spoon made from horn with silver tea motif by Philippa Merriman (Sheffield 2000). 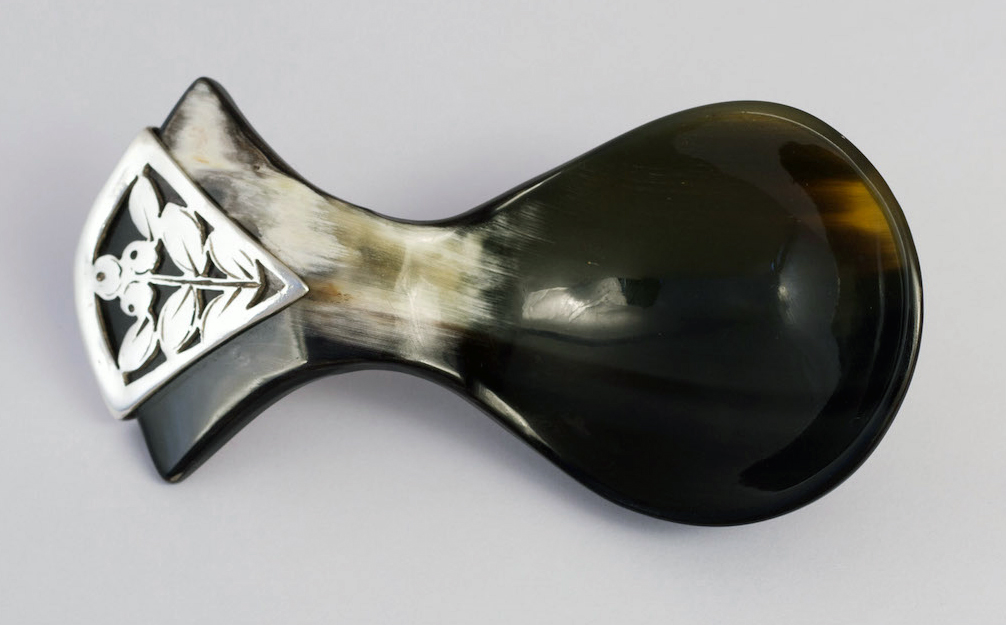 The exhibition, “The Story of the Caddy Spoon c.1775-2015” is being staged by the Society of Caddy Spoon Collectors to celebrate the 50th anniversary of its first exhibition, which was held at Goldsmiths’ Hall in London. The society has commissioned several new spoons in the last 40 years, the most recent designed by Malcolm Appleby and enameled by Jane Short, while society experts continue to research antique examples and examples of attribution and reattribution of makers since their first exhibition in 1965, all of which will be on show. Antiques for Everyone runs from April 9-12 and will be attended by more than 250 specialist dealers offering for sale a huge variety of desirable, rare and unique exhibits – including caddy spoons – at prices from less than £10 to more than £50,000. All items are for sale and vetted to strict criteria designed to ensure buyers can make their purchases in confidence. Entry is £15 including parking, but organizers Clarion Events has agreed to give Miscellaneana readers two tickets for the price of one. Please mention Auction Central News at the pay booth.

“This is one of the major events of the season for art and antiques buyers,” said Clarion’s Dan Leyland. “As always, we welcome collectors from across the world. In four days treasures are discovered, bargains struck and a great deal of business always achieved.”