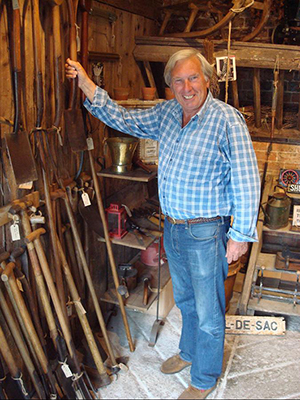 Graham Child with some of his vintage garden tools. Photo Garden Artefacts.

LONDON – Let me make it clear at the outset: I am no gardener. I hate gardening with a passion. Green-thumbed friends, on the other hand, tell me they’re spending their evenings going through seed catalogs, picking out the flowers and vegetables they plan to sow for next season. I’ll buy mine from the greengrocer down the street, thanks.

That’s not to say I’m immune to the delights of gardening though. I’ve spent the last few nights reading up about gardening antiques and I may have stumbled on yet another new way to invest for my retirement. The joy of it is, one man’s dibber is another man’s collecting cornucopia.

The man to thank for my conversion is Graham Child, formerly the head of Sotheby’s furniture department and the author of World Mirrors 1650-1900, a book that remains a standard work on the subject, so he knows a bit about antiques.

Instead of retiring to grow prize marrows, though, Graham has launched a second career as the purveyor of period aids to planting and prettifying the patches around our homes. His business, Garden Artefacts, is based in Cobham, Surrey, but he travels thousands of miles a year sourcing beautiful, rare garden objects, as well as the unusual, the decorative and the downright quirky.

The burgeoning collector’s market for vintage garden antiques, like my garden (a somewhat neglected area), is apparently down to the upsurge of interest in garden history and design. How strong the market has become will be tested when Graham exhibits at the Autumn Decorative Antiques & Textiles Fair in Battersea Park at the end of the month

He explained that until the 16th century, gardening tools tended to be simple, basic and heavy, having evolved from agricultural implements used for hundreds of years. As the centuries progressed, they became more customized and specific.

Paintings and prints from the mid-17th century illustrate the emergence of a wide range of tools such as hedging and pruning shears, cultivating forks and trowels. The Industrial Revolution resulted in the mass-production of tools that were lighter, finer and far more durable. Many are still around today.

Most vintage and antique garden tools are still capable of being used, notably dibbers in various designs. First recorded in Roman times, the pointed implements for making holes in the ground so that seeds, seedlings or small bulbs can be planted have remained mostly unchanged ever since.

In the 18th and 19th centuries, prior to farm mechanisation, long-handled dibbers were used to plant crops in the fields. One man would walk ahead making holes, while a second would plant seeds in each hole and fill it in using a hoe, another ancient and versatile agricultural tool which predates the plow.

There’s a specific and often weird and wonderful tool for almost every job imaginable. For example, daisy grubbers and the invaluable pigtail weeder, shaped like a corkscrew with a long handle, are still perfect for dealing with the most obstinate of weeds.

In addition to interesting sculpture and decorative objects, things to look out for include antique wrought iron, such as gates, fencing, trellises, benches and chairs; zinc-top tables; old stone troughs and urns; terra-cotta pots and planters; chimney pots, weather vanes and vintage signs.

If your passion – or wallet – extends to larger objects, seek out cast-iron village pumps and Victorian water carts, cast-iron seats, and fountains. Some can be used equally effectively in interiors, while original paintings and prints with a garden theme make a fascinating collection or perfect presents for the passionate gardener.

The Decorative Antiques & Textiles Fair runs from Sept. 30 to Oct. 5. It is held three times a year in Battersea Park, across the River Thames from Sloane Square and Knightsbridge. Around 140 exhibitors offer a fashionable and wide-ranging selection of English and European antiques and works of art, 20th century design, furnishing, accessories and lighting. Established over 25 years, it has an international reputation.

Ironically, another ex-Sotheby’s Sussex specialist, Alistair Morris, is the author of Antiques from the Garden, published appropriately by Garden Art Press. Thumbing through its 142 colour and over 500 black and white illustrations leaves you spoiled for choice.

Take watering cans, for example. While most of us have moved on to the plastic variety, pause for a moment to admire the 17th century thumb-operated earthenware version with a perforated base.

In the 18th century, brass and copper versions took over from pot examples and in the early 19th century, tinplate cans were in use. Arguable the best was patented by John Haws of Clapton in 1886, the patent for which reads: “This new invention forms a watering pot that is much easier to carry and tip, and at the same time being much cleaner, and more adapted for use than any other put before the public.” The company continues to make them to the original design to this day.

Charming Victorian handlights, or hand glasses as they were called in the 19th century, shaped like little houses with removable lids are at home today both inside and out in the garden, as are cloches or bell glasses; forcing and blanching pots for rhubarb and sea-kale and – best of all – glass cucumber straighteners and grape storage bottles.

Cucumber straighteners look like elongated glass bottles, the neck of which, when in use, was tied by string to the vine for support. The young fruit (yes, it’s a fruit which grows on vines) was enclosed in the bottle and thus had no choice but grow straight inside it.

Grape bottles, meanwhile, look a little like early baby bottles. The most common is the Copped Hall patent bottle, made by Wood & Son. In use, a section of vine that included a bunch of grapes was placed in the neck of the bottle, which was then filled with water and charcoal. The result was perfectly purified grapes.

And don’t forget the garden gnome. Much derided today, 19th century terra-cotta examples can be worth hundreds of pounds. They even have their own museum, based in West Putford, North Devon. 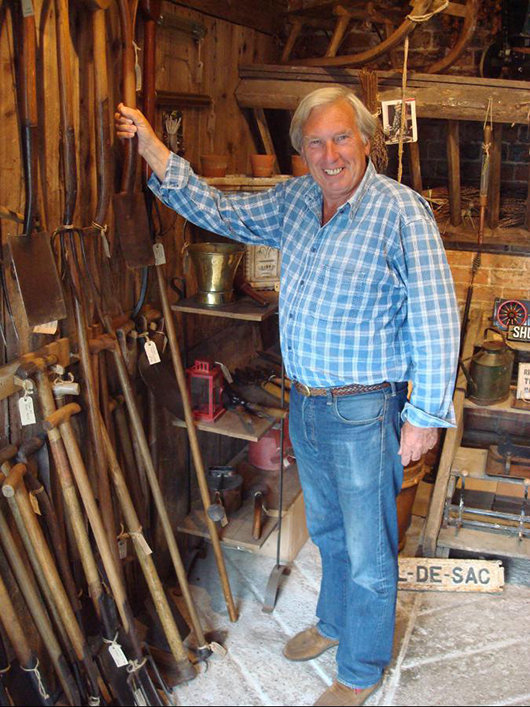 Graham Child with some of his vintage garden tools. Photo Garden Artefacts. 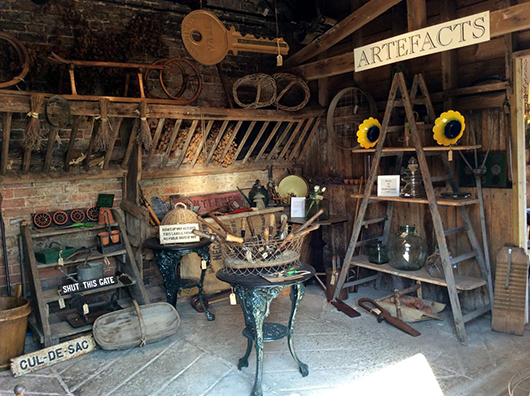 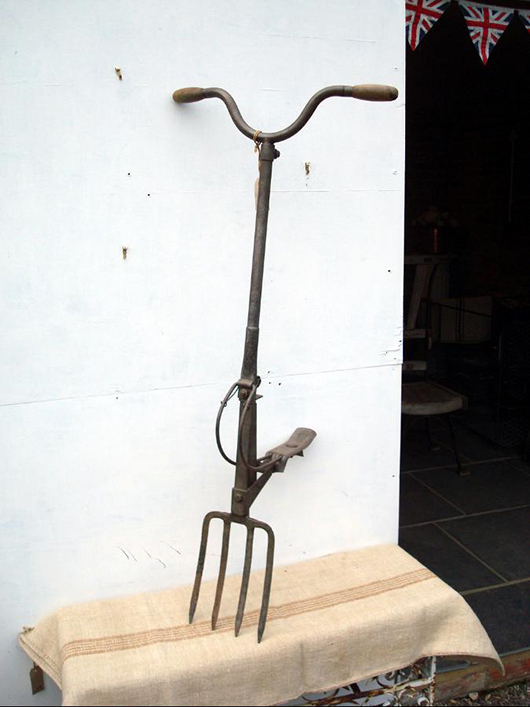 A rare patent digging fork. Step on the pedal and the thing digs for you – almost. Photo Garden Artefacts. 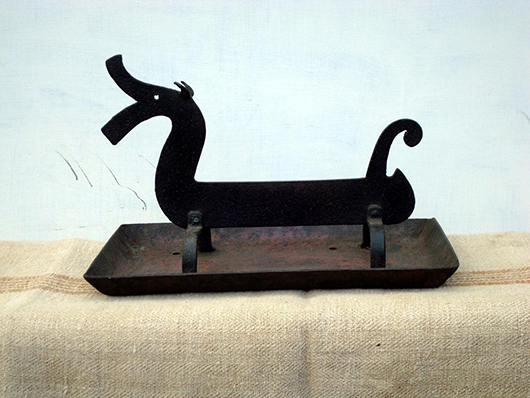 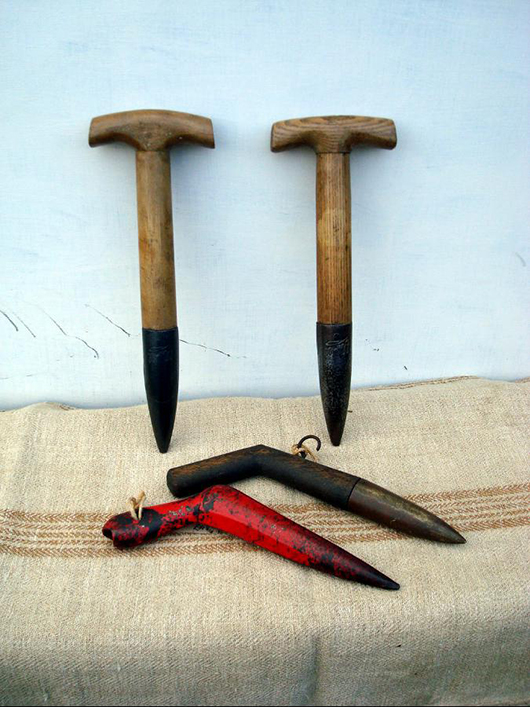 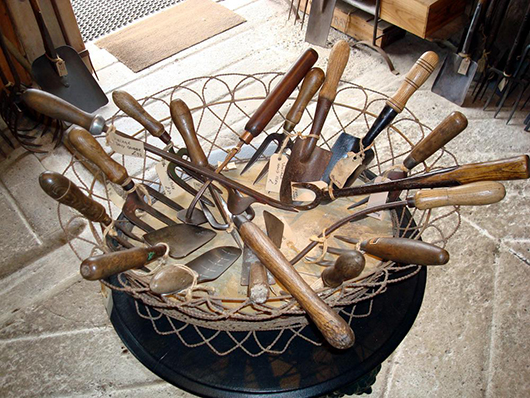 Some of the hand tools in Child’s collection. Photo Garden Artefacts. 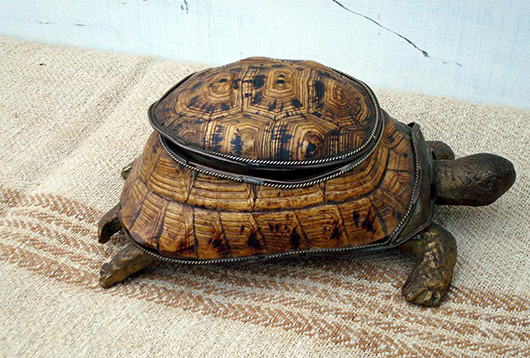 A tortoise lidded box – only the shell is real. The rest of the animal is cast brass. Photo Garden Artefacts. 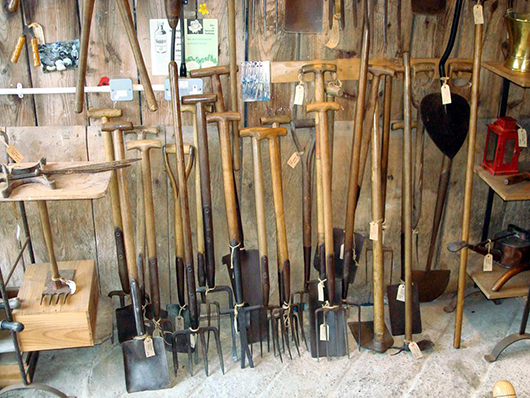 Some of the spades, forks and hoes in Graham’s collection. Photo Garden Artefacts. 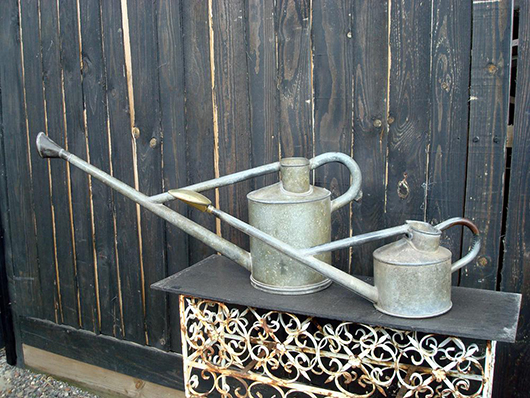 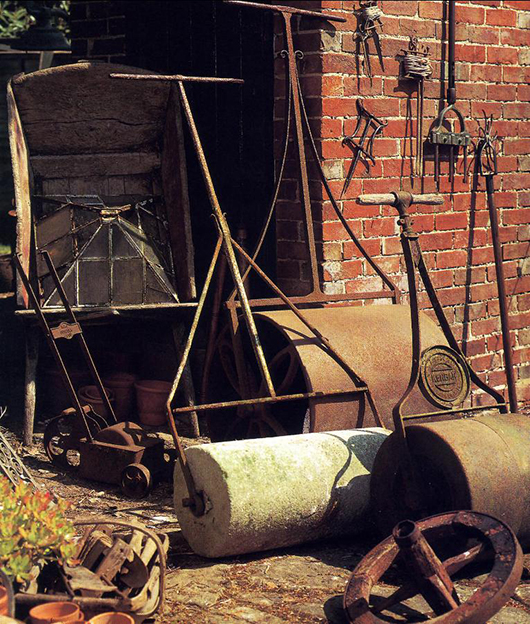 Ready for garden action: a selection of rollers and hanging on the wall, a group of garden lines. A handlight sits in the wooden wheelbarrow on the left. Photo: Alistair Morris. 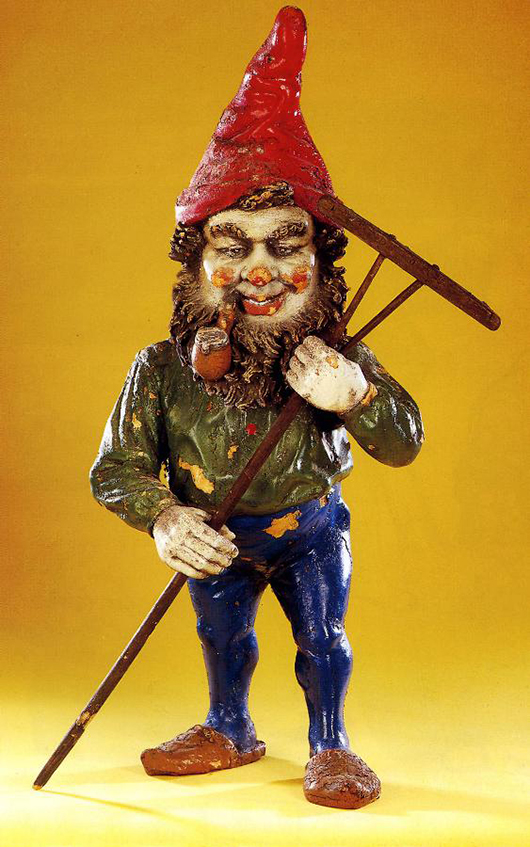 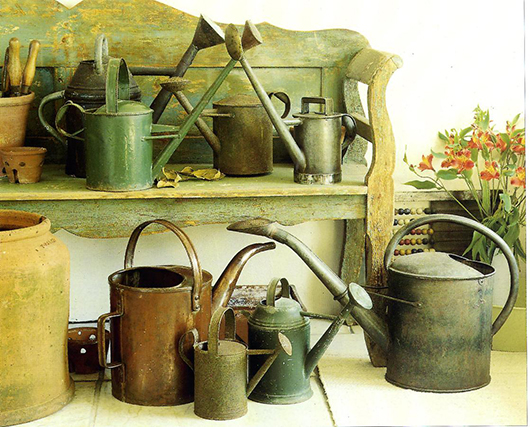 A selection of French and English watering cans including one small enough to be child-firendly, circa 1920. Photo Alastair Morris.