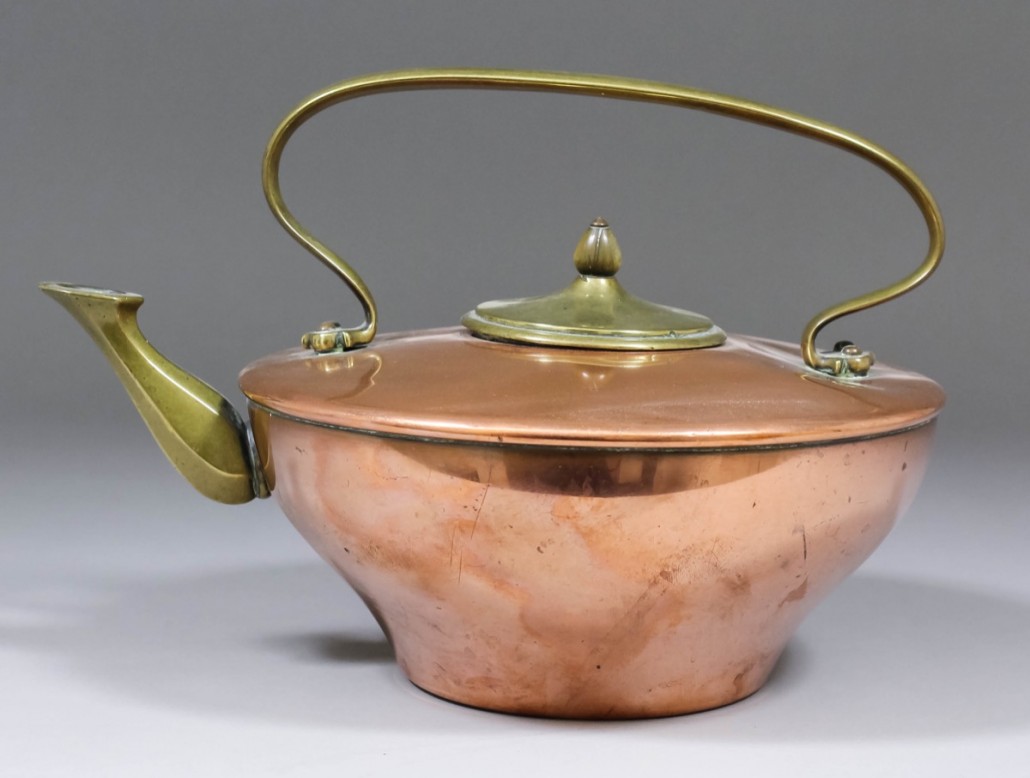 A copper and brass teakettle by Benson with an estimate of £100-£150. Photo The Canterbury Auction Galleries

LONDON – I’ve already written reams about the Arts & Crafts, and so have others all more learned and erudite than me, so there’s no point in rearranging the words. Encyclopaedia Britannica describes it as “aesthetic movement of the second half of the 19th century that represented the beginning of a new appreciation of the decorative arts throughout Europe.”

It continues: “By 1860 a vocal minority had become profoundly disturbed by the level to which style, craftsmanship and public taste had sunk in the wake of the Industrial Revolution and its mass-produced and banal decorative arts.

“Among them was the English reformer, poet, and designer William Morris, who, in 1861, founded a firm of interior decorators and manufacturers – Morris, Marshall, Faulkner and Company (after 1875, Morris and Company) – dedicated to recapturing the spirit and quality of medieval craftsmanship.

“Morris and his associates (among them the architect Philip Webb and the painters Ford Madox Brown and Edward Burne-Jones) produced handcrafted metalwork, jewellery, wallpaper, textiles, furniture, and books. The ‘firm’ was run as an artists’ collaborative, with the painters providing the designs for skilled craftsmen to produce.”

Oddly, a search on the encyclopedia’s excellent website about William Arthur Smith Benson (1854-1924) was less forthcoming, despite the fact that his obituary in The Times described his metalwork as as “almost an inevitable feature of Morris decoration.”

Fact is, Benson gets either a cursory mention, or else none at all, in a great many books and essays about the movement, which makes me somewhat more sanguine about failing to mention him myself until now.

However, when one of his signature brass and glass electric ceiling lights, picked up for a song apparently at an antiques fair in a field somewhere, sells for a cool £23,000, it’s time to take notice. 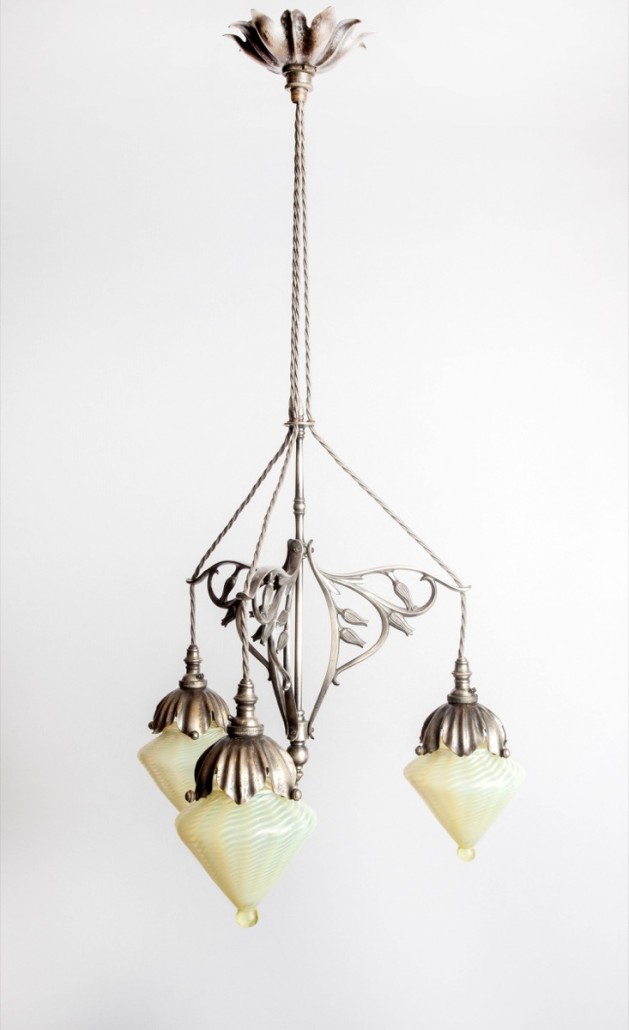 Annoyingly, I’m convinced we’ve seen a number of his lesser works on our antique-hunting trips, indeed we might once have owned one, but there’s no point in dwelling on what might have been. Instead, our eyes will be now forever peeled. I suggest you do the same.

Prices paid by collectors and dealers for products by the luminary pioneer continue their upward spiral. Only last week a rare clock in a fancy brass stand from the craftsman-designer’s Bond Street shop sold for a remarkable £5,600. It was seen last when it was acquired in a house sale in 1941. In April last year, one of only three others like it sold for £3,800 in another auction. 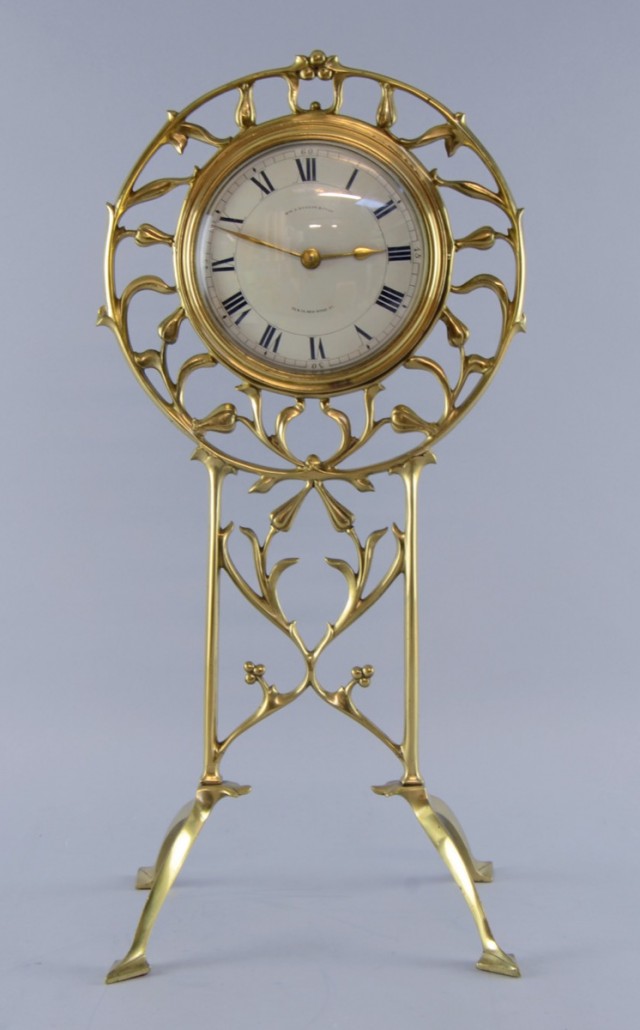 The mantel clock in a Benson brass frame formed by branches and flower heads. It sold for £5,600. Photo Ewbank’s auctioneers

Like Morris and others, W.A.S. Benson, a Quaker, was born into a wealthy middle-class family. His father was a barrister at Lincoln’s Inn and he was one of six children, living in Winchester, Hampshire. Benson studied classics and philosophy at Oxford and a career in his father’s footsteps seemed likely.

However, in his childhood, young William liked nothing more than spending time in his uncle’s workshop. An inveterate tinkerer with a passion for anything scientific and mechanical, the uncle taught him to use a lathe among his other tools and instilled in him a fascination with anything metal.

Hoping architecture would satisfy his interest in making things, Benson secured an apprenticeship with the London firm of Basil Champney & Co., close to William Morris’s workshops, but he was not content. When he met Morris and Burne-Jones in 1880, it took little effort for them to persuade Benson to quit his job and open a furniture and metal workshop. Morris called him “Brass Benson.”

It is believed Benson designed and made props for Burne-Jones’ studio including ship models, crowns and armor that feature in the artist’s paintings and with the factory’s closeness to Burne-Jones’ home in Hammersmith, Benson was soon introduced to his future wife, Venetia Hunt, a friend of Burne-Jones’ daughter and art critic John Ruskin’s god-daughter.

The growth of Benson’s business was rapid. He opened his own shop in New Bond Street in 1884 selling everything from lowly copper kettles, purdoniums (coal scuttles) and fire screens to grand chandeliers, each with the style and panache of the artist craftsman. His 1900 catalog boasted more than 800 items, all made in a new larger factory, opened in 1890 and employing 100 workers.

The advent of electricity and the light bulb was another lucky coincidence for the factory. While many of his light fittings were intended to run on oil and gas, they were easily converted to take wires and soon Benson was designing entire wiring and lighting systems for his clients’ newly built homes as well as churches and public buildings. 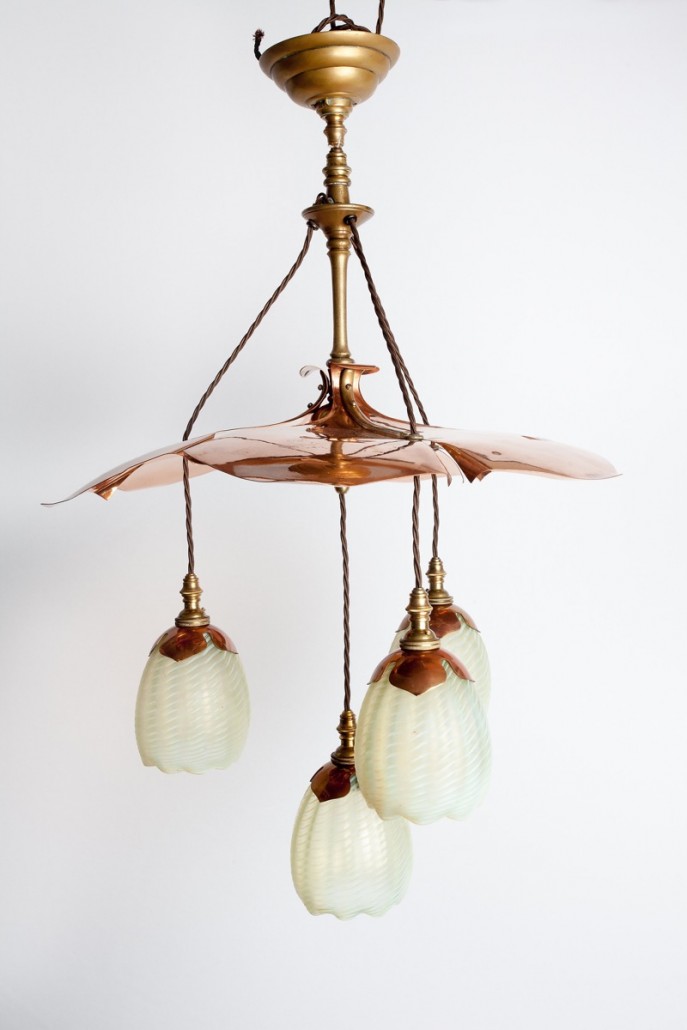 W.A.S. Benson & Co. became a limited company in 1900 and following Morris’s death in 1896, the managers of Morris & Co. sold out to Benson, who put his company secretary in place to run it. Benson also continued to do architectural work for his friends, notably Burne-Jones, and on the outbreak of World War I, Benson & Co. won an order from the War Office for 100,000 hand grenades.

Benson’s metalware is notable for its simplicity of form and its graceful lines. He made no attempt to hide the rivets and bolts that hold pieces together, or the cable that carries the electricity supply. His ingenious creations embrace both the organic and the honesty of what we might call industrial design. 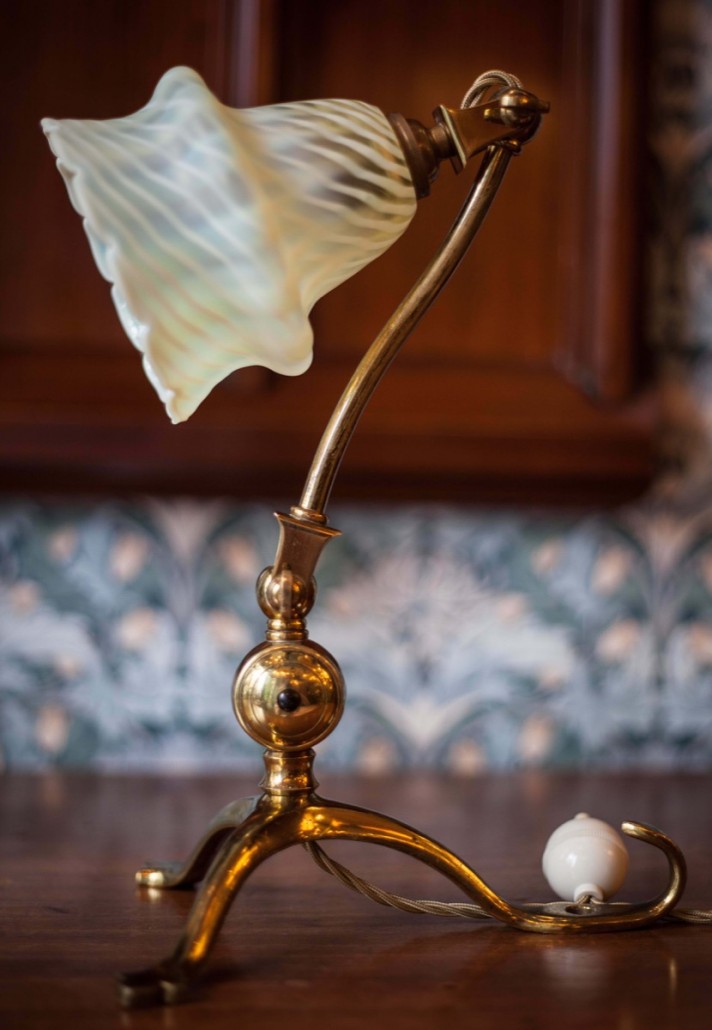 The Meadows Lamp Gallery in Edinburgh has one of the largest stocks of Benson lighting including this simple yet charming desk or bedside light with Powell glass shade. Photo Meadows

Interestingly however, his love of machinery and acceptance of the new put him at odds with purist Arts & Crafts designers who shunned anything that had not been made entirely by hand. Today’s collectors are fortunate to be able to enjoy both.

Look for Benson’s trademarks, which include his impressed initials separated by hammers; his full name and patent and New Bond Street address marks. 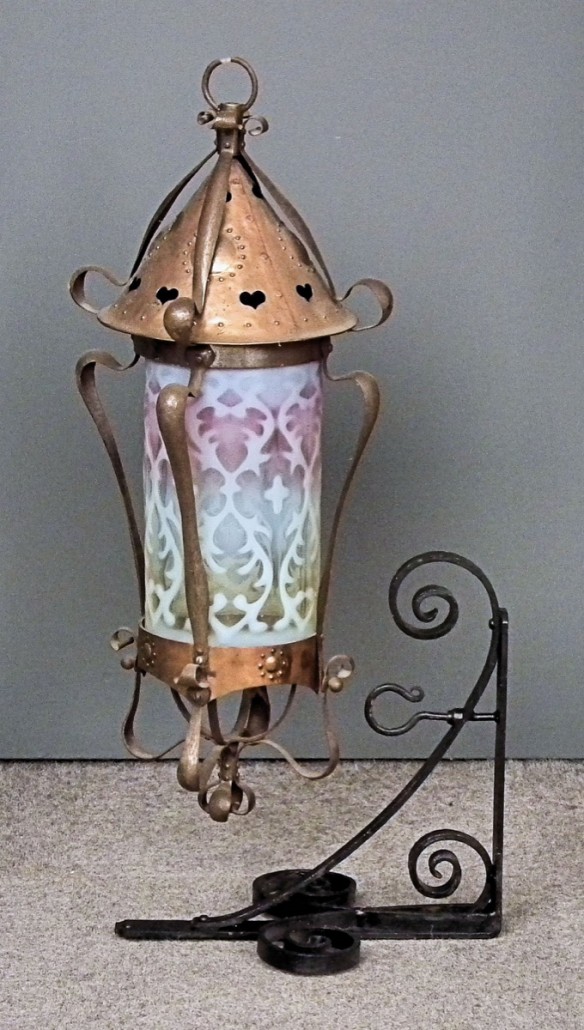 The other joy of Benson light fittings is the beautiful colored glass used for the shades. It was made at the historic Whitefriars works, owned by James Powell & Co., which had been in existence in Fleet Street since the 17th century. 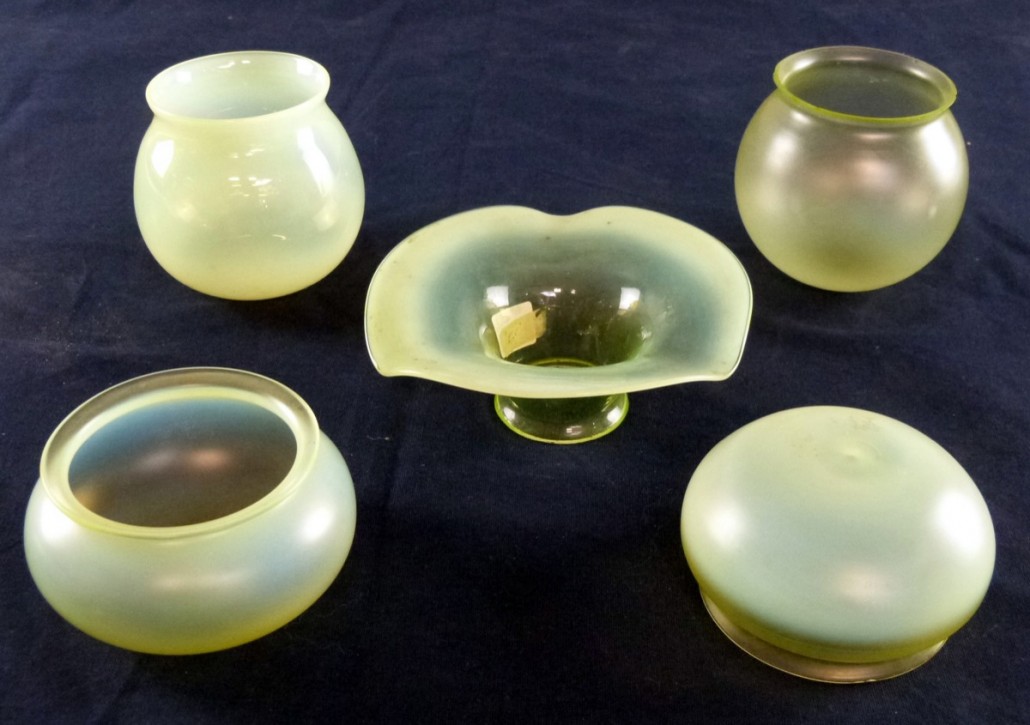 A selection of Vaseline glass shades for Benson lights by James Powell & Co. They sold for £150. Photo Ewbank’s auctioneers

The company passed to grandson Harry Powell (1853-1922) in 1875, bringing with him an Oxford education and a special interest in chemistry.

He introduced heat resistant “new colors from chemical processes and new techniques,” notable opalescent and Vaseline glass, which produced the shades of choice for Benson lighting.