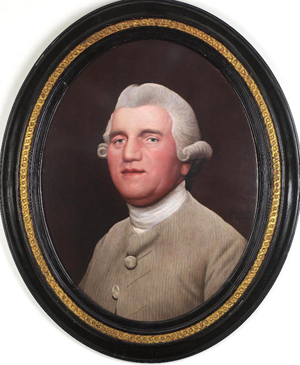 LONDON – I was intending to pass the begging bowl around this week, but thankfully it won’t be necessary. The Wedgwood Collection, a unique record of more than 250 years of British art and history – arguably the most complete ceramic manufacturing archive in existence – was in danger of being split up and sold off to fund a pensions debt. Now a campaign to raising raise sufficient funds to save it has succeed … and in record time.

To say I’m pleased is a gilt-edged understatement. I’m ecstatic. It’s the best antiques-related news for years. Better still, although the collection will be gifted the Victoria & Albert Museum, it will stay in its rightful home, the Wedgwood Museum in Barlaston in the Staffordshire Potteries.

The appeal was launched on September 1 with £13 million of the £15.75 million total already raised thanks to support from the Heritage Lottery Fund, the Art Fund and a small number of private trusts and foundations. The deadline was November 30. It took just 31 days to raise the remainder, almost 30 per cent of which given by private individuals, organizations and foundations in the Midlands.

Within the first two weeks the £700,000 mark had been passed and £1 million a few days later, every individual donation being matched pound for pound by a private charitable trust. Major donations included £250,000 from the bet365 Foundation and £100,000 each from Staffordshire County Council and the Bamford Charitable Foundation, the charitable arm of JCB.

The collection contains more than 80,000 works of art, ceramics, manuscripts and letters, pattern books and photographs covering the 250-year history of Wedgwood. More than that, it is also a unique archive of British politics, society, art, taste and fashion at a time of scientific discovery, intellectual enlightenment and turbulent social history.

Documentary pieces record the development of the iconic black basalt, cream-colored Queen’s ware, and blue-and-white Jasperware; and Wedgwood’s commissions to artists ranging from John Flaxman’s neoclassical designs in the 18th century to Eduardo Paolozzi, Peter Blake and Patrick Heron in the 20th.

Among the most valuable items in the collection are the Wedgwood family portraits painted by Josiah’s friend and protégé George Stubbs (1724-1806) and Sir Joshua Reynolds, (1723-1792) the founding president of the Royal Academy.

The collection had been at risk since December 2011 when the High Court ruled it should be sold to claw back some of the £134 million pension debt the Wedgwood Museum Trust inherited when the UK subsidiary of Waterford Wedgwood collapsed in 2009. The debt transferred from company to the trust because the two had been linked through a shared pension fundThe Barlaston museum’s future is now assured. Stephen Deuchar, director of the Art Fund said Britain had united to save the collection: “This amazing show of public support has made this the fastest fundraising campaign in the Art Fund’s 111 year history,” he said.

“It demonstrates nothing less than a national passion for Wedgwood – its history, its quality, its brand, its continuity – bringing about a potent combination of donations big and small, ranging from £10 gifts via text to six-figure cheques. Huge thanks to the Heritage Lottery Fund and their ticket buyers too. Together we’ve ensured that one of the most important collections in the world can continue to be enjoyed by all.”

Talks are now in the works between the V & A and Waterford Wedgwood Royal Doulton, which owns, manufactures and distributes the Wedgwood brand. The museum will lie at the heart of a major new visitor experience that will be part of a £34 million redevelopment of the factory site, which is expected to open in the spring next year.

Josiah Wedgwood (1730-1795) is the father of English potters. The youngest of 12 children, he was born at his parents’ pottery in Burslem, started school at the age of six, was forced to leave on his father’s death at nine, worked for five years as apprentice in the family pot bank, and was then struck down by smallpox.

It was a cruel blow that affected his legs, making him unable to operate a potter’s wheel. Cast adrift by his family – his eldest brother refused to take him into partnership – he worked for two years for another potter before he met and, in 1754, entered into partnership with one of the most eminent potters of the day, Thomas Whieldon.

Robbed of a career as a potter, Wedgwood concentrated on developing new ceramic bodies and glazes, and by the time the Whieldon partnership expired in 1759, Wedgwood had invented several new products. He started his own business back in Burslem and began to prosper.

In 1762, he met Thomas Bentley, a successful merchant with a wide and cultivated taste and who had the right social contacts and a knowledge of the arts that gave him an eye for design. Wedgwood was quick to recognize the inspiration that Bentley offered and the two formed a partnership that lasted until Bentley’s death in 1780.

It was at this time that collectors became interested in the classical antiquities being discovered in Etruscan tombs. When Wedgwood and Bentley opened their new works in 1769, they called it Etruria and set about developing a ceramic body to make copies of the Greek vases being excavated.

After years of painstaking experiments and trials, in 1774 Wedgwood perfected a ceramic body that he called Jasperware, a fine, dense, highly vitrified, almost translucent stoneware decorated with classical figures in bas-relief. The firm has been making Jasper ware, perhaps better known as Wedgwood Blue (although it comes in other colors), ever since. 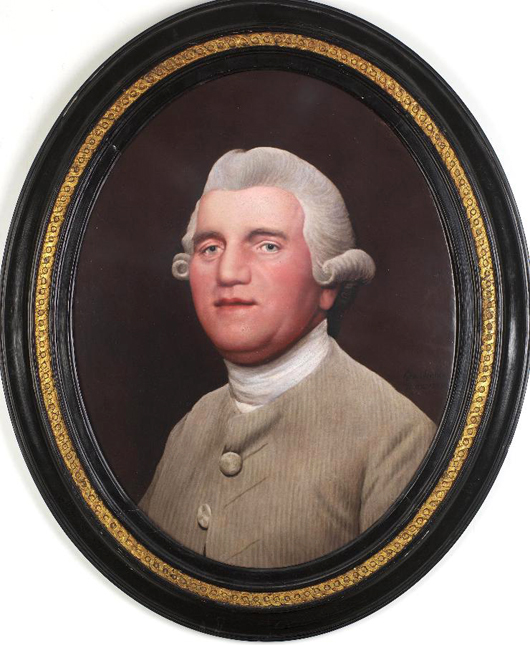 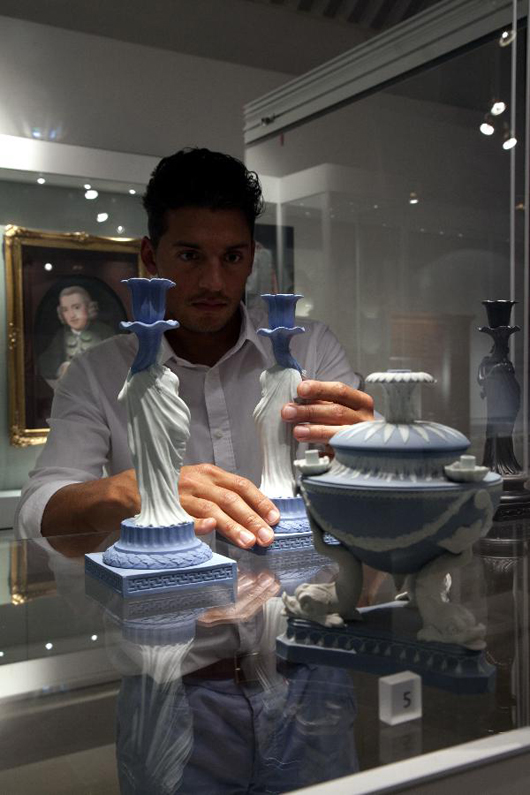 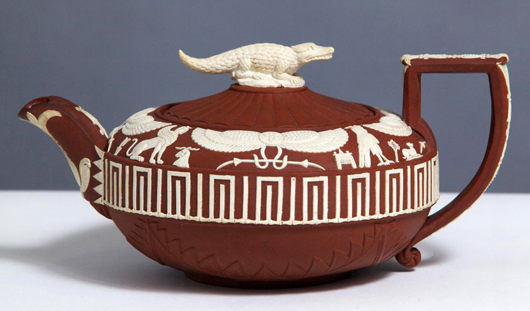 Rosso antico “Egyptiana” teawares with either black or white decoration proved popular, particularly in the aftermath of Nelson’s naval victory at the Battle of the Nile. The crocodile finial is thought to refer to a remark made by Nelson’s mistress, who said that he ought to be made ‘Baron Crocodile’ because of his Nile exploits. Photo The Wedgwood Museum/Phil Sayer 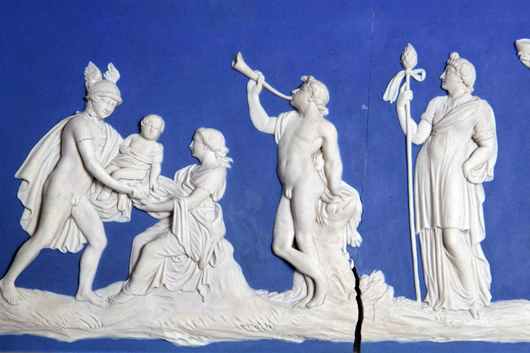 A blue and white Jasper plaque modeled by William Hackwood showing Hermes delivering the infant Bacchus to one of the Nymphs of Nysa. It dates from 1775-80. Photo The Wedgwood Museum/Phil Sayer 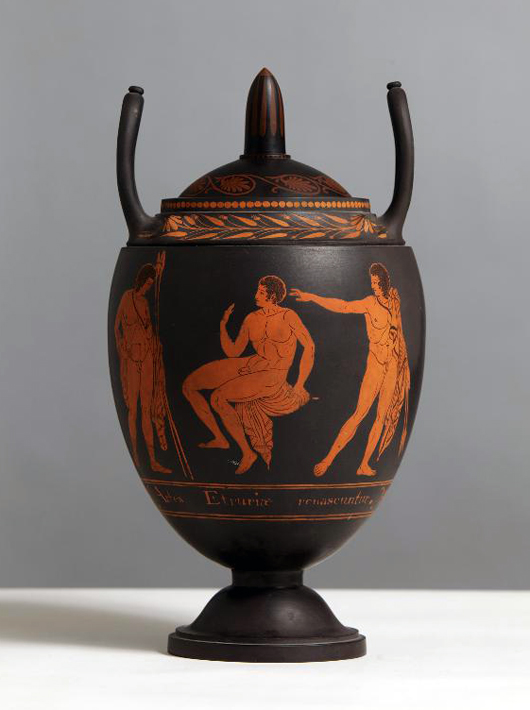 A ‘First Day Vase,’ one of six produced on the first day of production at the Etruria works thrown personally by Josiah with Thomas Bentley turning the wheel and the blueprint for mass-production. Photo The Wedgwood Museum/Phil Sayer 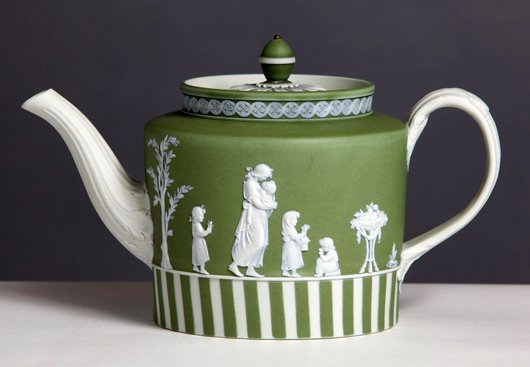 A white jasper teapot, circa 1785-1790, decorated with a pale green dip and white bas-relief figures. Photo The Wedgwood Museum/Phil Sayer 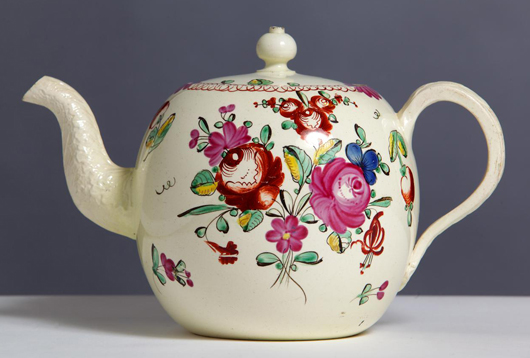 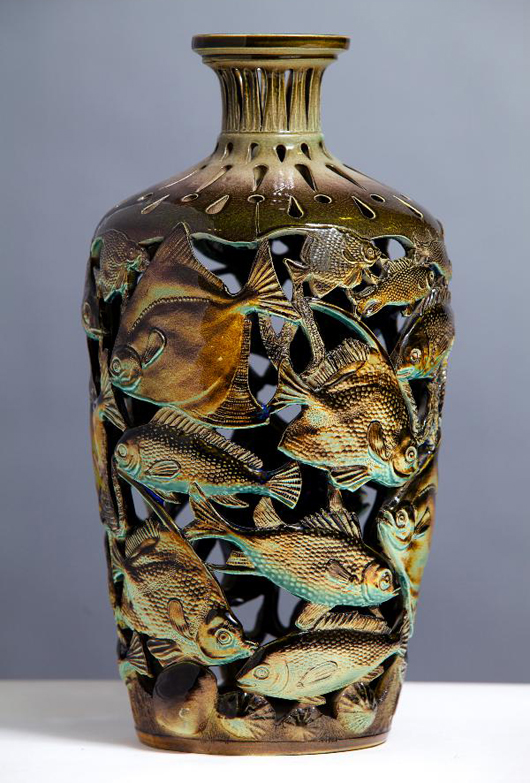 A studio vase by Elwyn James, 1975, each fish painstakingly hand-carved from the bone china body and decorated using experimental glazes to make the scales shimmer. Photo The Wedgwood Museum/Phil Sayer