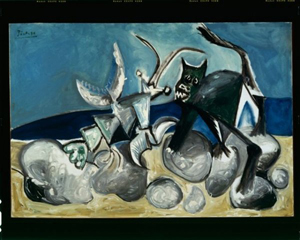 I always get excited when I hear about a new “find” in the world of antiques. It just goes to show there are still things out there that are hidden, just waiting to be discovered.

The other day I was reading about the latest find in the art world, and what a find it was! A collection of 271 paintings, drawings, sketches and lithographs were uncovered at the home of a retired French electrician. The collection’s value is estimated at 60 million Euros.

So what is a retired electrician doing with 271 works of art by Picasso?

He claims they were given to him over the years by Picasso himself, in exchange for installing alarm systems in the artist’s numerous homes. Pierre Le Guennec (the electrician) produced a notebook filled with never-before-seen drawings as well as photographs of numerous other artworks. Some of the works had been assumed “lost” after floods ruined Picasso’s studio.

According to Le Guennec, the gifts were given to him during the last three years of Picasso’s life.

This has to be some of the most exciting news the art world has heard in quite some time. What a find, right?  Or is it?

Three months ago, Le Guennec walked into the offices of the Picasso Administration. For those of you new to the art world, there is a committee that gives the thumbs up or thumbs down for newly found works by certain artists.

Le Guennec surprised everyone with a suitcase filled with 175 different works he claimed were Picassos, and was seeking certificates of authenticity. Claude Picasso had been contacted by Le Guennec several months prior to the visit. Le Guennec had submitted numerous photos of the works, but the photos were not of high quality. Claude Picasso disregarded them, since they depicted artworks that were not documented anywhere.

The works were devoid of dates, which according to Claude Picasso, means they should have never left the studio. However, they did bear proof of a numbering system that was known only to the artist.

Picasso was a very generous person, but as his son noted, Picasso would have signed and dated, and perhaps even dedicated any artwork he gifted to another person.

So where does that leave the collection? Recently Le Guennec was arrested by the French police, only to be released without any charges made against him. The six remaining Picasso family members are taking legal action against Le Guennec for receipt of stolen goods. The French police are also delving into the case further.

Le Guennec stands by his statement that he did not steal the works from Picasso.

From where I sit, and for what it’s worth, it would seem as though these items might have been given as gifts, because as Picasso’s son states, there are no records of most of the items, yet they appear authentic. Playing devil’s advocate, one has to ask why an electrician would have sat on these for so long before having them authenticated. Then again, there is no record of his having tried to sell them. If they are stolen goods, Le Guennec might have been better off trying to get just one authenticated that day at the administration office, as opposed to hundreds.

So many things to consider, not the least of which being – what would happen to the market for Picasso art if all of these should become available?

I have a feeling this is not the last we’ll hear about this story.

Staggering trove of Picasso art turns up in France