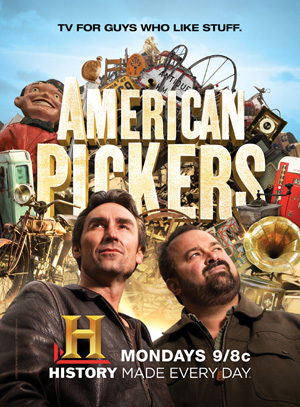 The History Channel has caught the collecting bug and produced two new hit shows for their Monday night lineup.

Pawn Stars, which is in its second season, touts a viewership of 5.7 million viewers. American Pickers, which airs right before Pawn Stars, debuted in January and has already caught the eye of 3.8 million. I’ve watched both shows several times and have to say I find them engaging.

Pawn Stars offers a look inside the world of pawn shops – a place people would not often think of to find antiques (or a place to sell their family heirlooms). I have to admit, I wonder if the show is somewhat “set up,” as I’ve been to Las Vegas numerous times on buying trips, and never have I found the sheer volume of quality goods that seem to walk through the door daily on the show.

I do like the family dynamics to the show,  and the fact that there is another show out there to entertain audiences about the interesting world of collecting. That gets two thumbs up from me.

American Pickers follows the adventures of two guys who “…make a living telling the history of America, one piece at a time.” They travel across the country in search of forgotten antiques and collectibles that can be salvaged and potentially yield a profit.

Amid praise from many, the show has met with some criticism, and I wanted to address that criticism here.

The two main characters of the show are down-to-earth, everyday kind of guys. I wasn’t a huge fan of either at first, but I have to admit, they have grown on me.

What I really love about this show is that it’s completely old school. Back in the day, this is really how business was done.  “Pickers”are dealers who sell to other dealers. They go out and “pick” a variety of merchandise from barns and rural homes to sell to dealers, who in turn sell the items to you.

No one goes knocking on doors anymore like these guys do. The Internet has changed the way the antiques business works in many ways; from where people find their merchandise, to how they go about selling it.  The few pickers who are still out there have all but stopped selling to dealers and now instead consign their inventory to auctions or sell it themselves on eBay.

Many things that were once considered rare are now acknowledged as being more common than originally thought, and you can sell things in your pajamas halfway around the world morning, noon and night. The need for a shop and all the overhead that comes with it is gone.

There was also a time long ago when being an antiques dealer meant you were knowledgeable about the things you bought and sold. With the coming of antique malls and online stores, anyone with a variety of odds and ends picked up at local yard sales and flea markets could display an “antique dealer” sign above their door.

Off my soapbox…these guys are the real deal. They know the history of the things they are buying (and selling), and they really do make their living traveling the country looking for that needle in the haystack.

I’ve read numerous online discussions of people’s opinions of the show. It seems the issue everyone has a problem with is the price the Pickers – Mike Wolfe and Frank Fritz – are paying for the items they purchase. There are a few things to keep in mind:

The bottom line,  it’s great having another show on the air that allows viewers to peer inside the homes and the minds of people who collect. This show is a little history, a little entertainment, and a little bit of luck.  If you’ve been meaning to clean house and you think you’ve got a barn or garage full of old stuff, give these guys a call. But prepare to wait. The rest of America is calling them, too!

Rockwell portrait with fascinating history offered in Fuller’s May 8 auct...
Scroll to top