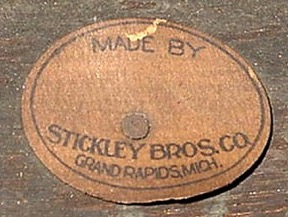 Early label – This oval paper label was used by Stickley Brothers in the late 1800s to about 1916.

CRYSTAL RIVER, Fla. – The name Stickley is perhaps one the most famous and widely respected family names in the history of American furniture. And the most widely recognized of the five Stickley brothers was the oldest, Gustav. I have postulated that Gustav was ultimately responsible for the “American Look” in 20th century furniture. And while Gustav was famous in the span of his brief career and is even more revered today in auction halls across the country, how many pieces of Gustav’s work have you actually seen with your own eyes? How many have you had the chance to examine and appreciate in person what Gustav was trying to project? Even better yet, how many Gustav pieces do you own, or how many pieces did your parents or grandparents own?

If you are like most of the rest of America, including me, the answer is zero. I have been in the antique furniture business for over 30 years and I must admit I have personally examined a small number of Gustav Stickley pieces that were without doubt Gustav’s work. It may the part of the country I live in or the company I keep, but so far I consider myself to be in Gustav deficit.

On the other hand if you want to talk about Stickley pieces I have seen hundreds, maybe even thousands of pieces of furniture that have a Stickley label of some sort on them. Considering the Stickley family history that is not uncommon. There were five Stickley brothers and they all were in the furniture business either singly or in various combinations with one or more brothers. The first Stickley endeavor was a company called Stickley Brothers Furniture Co. in upstate New York under the leadership of Gustav, Albert and Charles formed in 1884. But like many family arrangements that began to come apart rather quickly. Charles left first joining his in-laws to form Stickley-Brandt. Then Albert left to join his brother John George in a new venture in Grand Rapids, Michigan. Gustav meanwhile changed the name of the original company to Gustav Stickley Co. That left Albert and J.G. free to use the name Stickley Brothers for their new company in Grand Rapids, formed in 1891. J.G. left Grand Rapids in 1900 and partnered with brother Leopold in New York in 1902 to buy the firm of Collins, Sisson & Pratt in Fayetteville, New York, to be renamed the Onondoga Shops and later to become the L. & J.G. Stickley Furniture Co. That left Albert alone in Grand Rapids, but he retained the name of Stickley Brothers and the company soldiered on until 1954.

Albert is the one most responsible for the proliferation of the Stickley name. L. & J.G. produced a fine line of furniture but not in the variety and quantity that Albert put out under the aegis of Stickley Brothers. Between 1891 and 1900 when John George left Stickley Brothers muddled along like almost everybody else making primarily Colonial Revival style occasional chairs and fancy tables and dabbled in Mission style as early as 1900. 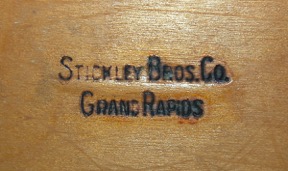 This burned in mark was used off and on throughout the company’s history.

The first Mission style for Stickley Brothers was the Bewdley line designed by D. Robertson Smith in 1902. Drawing on European Arts & Crafts styles it featured floral inlay that contrasted sharply with the angular forms. It was similar to but a predecessor of the Shop of the Crafters work in Cincinnati, Ohio, which opened in 1904. The Arts & Crafts/Mission field was already crowded when the Bewdley line made the scene and the Stickley name was already overshadowed by Gustav. Then in 1902 Stickley Brothers stumbled on the term that would prove to be the company’s hook to history, one that would serve it well for several more decades. The term was “Quaint,” the term used in England at the time for Arts & Crafts style furniture. After a series of paper labels, burned-in marks and gold colored decal the company settled on a brass metal tag based on an Art Nouveau design that said simply “Quaint Furniture.” Another version in 1903 featured an Art Nouveau stand that said only “Quaint.” 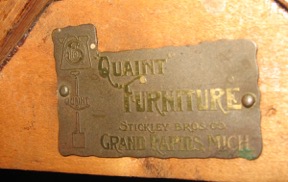 Mission – This brass tag with the Art Nouveau stand was used on the earliest ‘Quaint Mission’ styles beginning in 1902.

By 1903 the new Quaint Mission line was in full production but by then the market was a little oversold. Even as catalog houses like Larkin began to enter the market as early as 1909 Stickley Brothers was already looking for a way out. At first the step out was tentative with a merely a softening of the harsh look of the Quaint Mission line that included turned legs and a few curves and a new name that included Quaint of course. This was the Quaint Arts & Crafts line. The line continued for several more years but around 1910 the next new thing dawned on the company.

The next new thing was just another old thing – European revival styles that were advertised as being “modernized period styles.” And the name? Anything as long as it included Quaint. One variation was the “Quaint Tudor” line complete with heavier English looking furniture with bulb turned legs but with an obvious kinship to Quaint Arts & Crafts. By 1914 another line based on Austrian designs with inset cane panels and cut out decorations called the “Quaint Manor” line.

A slight detour occurred after the introduction of Quaint Manor when the company engaged James Seino and a group of Japanese artisans to being an Oriental painted look to Stickley Brothers. But that was just an aberration. By the 1920 the American Colonial Revival market was too strong to be ignored and the company jumped in with – you guessed it – another Quaint line. This time it was the “Quaint American” line of natural and polychrome Windsor chairs, ladder-back chairs, gate-leg tables and chests based on Colonial designs. 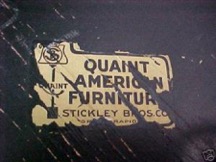 By the mid 1920s the company quit referring to its style lines with specific identities attached to the Quaint label and just called them “Quaint American Furniture.” The company label reflected this shift and by 1926 the label was changed to simply read “Quaint Furniture of Character, Stickley Bros. Co.” and by 1928 it was further simplified to just “Quaint Furniture.” By the mid 1930s the only reference to Quaint in the company label was found in the Art Nouveau style logo that had been employed since 1902. From the 1930s to the 1950s when the company closed Stickley Brothers produced “country” informal versions of American Colonial styles that eventually fit in nicely with the “early American” look of the late 1940s and early 1950s. 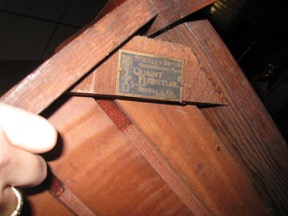 Stickley Brothers demonstrated a remarkable flexibility in the styles and forms if not in the names over its 50 plus years of life and brought a Stickley labeled piece of furniture into a great many American homes, even if it wasn’t Gustav’s label. Of course there is another Stickley label from L. & J.G. Stickley, but that is a story for another day.

Send comments, questions and pictures to Fred Taylor at P.O. Box 215, Crystal River, FL 34423 or email them to him at info@furnituredetective.com. Visit Fred’s newly redesigned website at www.furnituredetective.com and check out the new downloadable “Common Sense Antiques” columns in .pdf format.
His book “How To Be a Furniture Detective” is available for $18.95 plus $3 shipping. Send check or money order for $21.95 to Fred Taylor, P.O. Box 215, Crystal River, FL, 34423.
Fred and Gail Taylor’s DVD, “Identification of Older & Antique Furniture” ($17 + $3 S&H) is also available at the same address. For more information call 800-387-6377 (9 a.m.-4 p.m. Eastern, M-F only), fax 352-563-2916, or info@furnituredetective.com. All items are also available directly from his website.