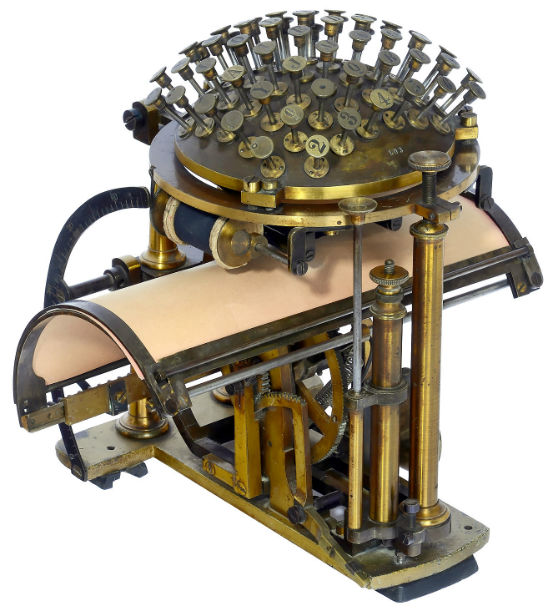 Who was Rasmus Malling-Hansen and how did he come to create the Writing Ball? Was he an inventor, or is this the only thing he made? He was a Danish pastor and also the director of the Royal Institute for the Deaf and Dumb in Copenhagen. He didn’t have an inventor’s background. He designed it with his students in mind, to help them “speak with their fingers.” That was the objective of making the Writing Ball.

The lot notes say Malling-Hansen claimed those who used the Writing Ball could achieve a speed “easily two to three times as fast as normal,” presumably meaning “normal” was handwriting speed. Was the device able to do that? I’m not sure about it compared to handwriting, but compared to other machines that came later, yes, and for two reasons. One, its spherical shape made the positioning of the fingers easier and more natural. Two, the placement of the keys, with the vowels at the left hand and the consonants at the right, made the schematics of the machine easier to grasp. And it was a relatively compact machine compared to typewriters that came later. It also had spring-loaded keys, so the pressure needed to type was less – you didn’t have to work as hard.

What innovations did the Writing Ball introduce that became standard features on later typewriters? The main ones were the automatic carriage return, the space bar, the bell to signal the end of the line, carbon copies and visible writing – when you lift the hemisphere away from the curvature [the beige-colored curved piece below the keyboard] you can see what you wrote on the paper.

Did the Writing Ball debut all these features, or was it the first to bring them together? It was the first one to put them together. His machine was really revolutionary when you look back on it now. It was almost too modern for its time.

How many Writing Balls were made? Do we know? And is the serial number on this one, 103, a clue that helps us figure out how many were made? Yes, it is a clue. Mr. Breker estimates 180 were produced, and 35 survive.

Do we know how long the production run was? In the space of 10 to 12 years, and they were all made to order. You couldn’t walk into a shop and buy one. It took a while [to make one]. Friedrich Nietzche’s, I think, took nine months to be delivered. He ordered his quite late in the production cycle. He was a famous customer, but not a satisfied customer. There’s an article about how his was damaged on a trip to Geneva. He blamed the machine, but it was probably the roads or rails of the time.

How many Writing Balls has Auction Team Breker handled? Our electronic records start in 1999. Since then, we have sold six. Mr. Breker thinks that before 1999, we sold another six.

Does this Writing Ball work? It does, yes. I haven’t used this particular machine, but I have used another.

What is it like in person? I think one of the things that’s remarkable about the design is it’s very organic, the curvature of the top and the keys. The things you see in person are the complexity of the appearance, combined with the function. And it has a beautiful patina. It has a very soft look, like the lacquer you see on an antique microscope or telephone. And it’s not been restored, which you really appreciate it when you look at it. All the keys are original as well. This is all-original.

So, no parts have been replaced? As far as we know, it’s all original and functional.

Is that unusual? It’s quite unusual, and it’s probably [survived so well] because it’s been in one family. When something comes to market from one family or collection, the condition is usually very good.

The lot notes describe the Writing Ball as being in “excellent general condition.” What does that mean here? Auction Team Breker uses a coding system. Mr. Breker coded this as a 2-2. The first 2 means very good, one step down from mint. I don’t think any antique typewriter is mint. The other 2 means it’s in fully functional condition. If you’re inclined, you can write a letter on it. It’s better if it doesn’t need to be restored. In reality, most Malling-Hansen Writing Balls are in museums or advanced private collections. Another element with antique metal is the brass lacquer. The original patina is very sensitive to touch. To preserve it in good condition, you shouldn’t type – maybe a once-a-year special demonstration is enough.

Why will this Writing Ball stick in your memory? They’re all special. This one has a nice family history, which makes it stand out, but they’re all special in their own way. They all have something different about them.

Anything else you’d like to point out about this piece? In the catalog description is a translation of a sonnet that Nietzsche wrote about the machine in frustration: “The writing ball is a thing like me: / Made of iron yet easily twisted on journeys / Patience and tact are required in abundance / As well as fine fingers to use us.” It was nice to include.

It’s funny to see that Nietzche got frustrated by his typewriter in the 19th century. Machines seem to possess a life of their own. They don’t do what we want when we need them the most. The great philosopher had similar problems as we have today with our laptops and iPhones. Modern technology and being alienated from technology probably goes back as long as people have had machines.

How to bid: The Malling-Hansen Writing Ball is lot 0076 in the 150th Science & Technology, Mechanical Music, and Toys auction taking place May 18, 2019 at Auction Team Breker in Cologne, Germany. 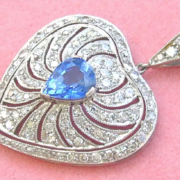 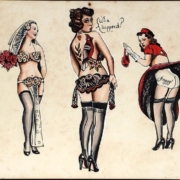 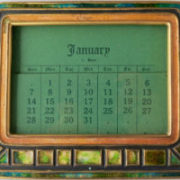 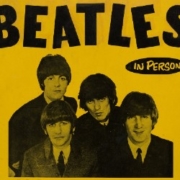 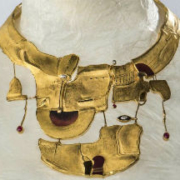