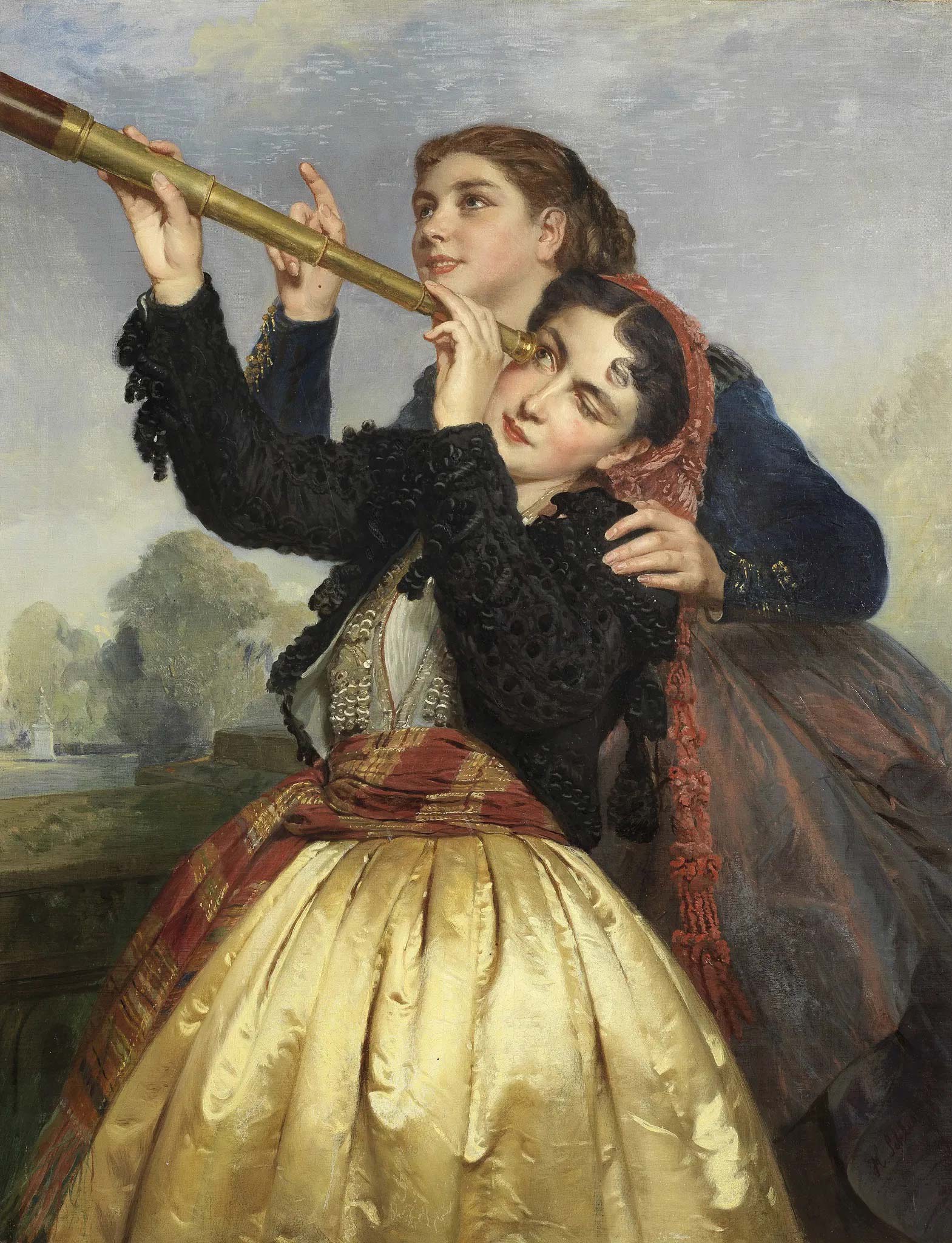 The expert: Martina Fusari, specialist in the 19th century paintings department at Bonhams.

Who was Henri Guillaume Schlesinger? Where was he in his career in 1865. when he submitted this group of works to the Salon? He was born in Frankfurt, Germany in 1814 and studied at the Academy of Fine Arts in Vienna before moving to France. In Paris, he exhibited regularly at the Salon between 1840 and 1889.

Wait, he got into the Salon regularly over a 50-year span? Whoa. The Salon helped him secure good visibility and important commissions. He won a bronze medal [at the show] in 1840 and a silver medal in 1847.

It sounds like Henri Guillaume Schlesinger was not just a skilled artist. He was equally good at figuring out what subjects would earn a place in the Salon lineup year after year. He was known for his lively and sensitive depictions of young women. There’s no way we can prove it [that he explicitly acknowledged a strategy for winning a place in the Salon]. We couldn’t find any letters or diaries in which he wrote, “Yes, of course.” There’s still a lot to be discovered about the artist.

Painting a set of five interrelated works is a huge commitment, especially when you’re doing it on spec, as an entry for an upcoming Salon. Why do you think Henri Guillaume Schlesinger thought that his bet would pay off? It’s a very commercial and eye-catching subject, and he conveyed it in a way that was light and easy for the public to understand. It immediately captured a lot of attention, and it’s impressive because of its size. He illustrated the five senses over five large canvases and put them on display in frames. I’ve never seen something like it before–I’ve never seen such intricate, architectural frames on five paintings like that. And I think he wanted to be criticized [he wanted to cause controversy] because it was a way to be noted. The Five Senses was probably the turning point of his career. Emperor Napoleon III bought it for 25,000 francs. That was more than what the French state paid other established French artists.

In painting the set of five canvases, Henry Guillaume Schlesinger was betting that the Salon would find enough wall space to display them. Most artists were lucky to land one painting in the show, never mind five. Was that a risky move on his part, even though by 1865, he had a decades-long track record of winning a place at the Salon? That’s true, but consider that the size of the paintings at the Salon was pretty large. Artists were pushed to work on very large canvases, and the Salon was the place to do that. It could showcase your abilities, and let you show off and be recognized by the public and by critics. 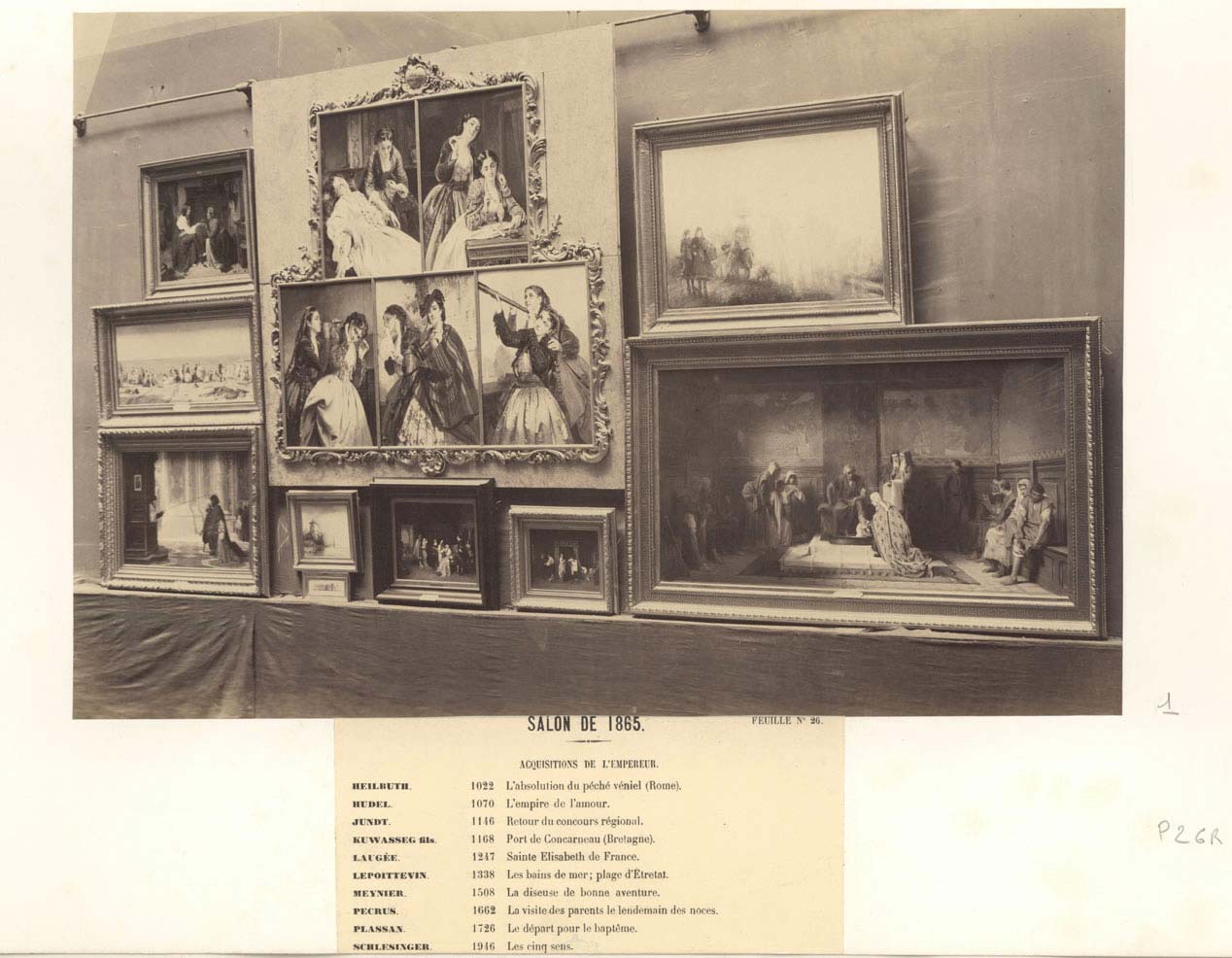 In researching the lot, Martina Fusari located a period photograph of Henri Guillaume Schlesinger’s The Five Senses on display at the 1865 Paris Salon. Image courtesy Bonhams

There’s a phrase we like to say in America: Go big or go home. Was the ethos of the Salon kind of like that? In most cases, yes. They [the show’s planners] wanted to make sure that artists were able to work well on a large scale. It’s not easy. You’ve got to master the skills to do so. That’s why the canvases the artists submitted had to be large.

Still, five canvases is a lot, even if they’re a themed set. They’re five large canvases, but they’re not massive canvases. When you put them together, all in their frames, it’s quite something.

The five senses is a theme that shows up in Western art as far back as the Middle Ages. Rubens and Brueghel the Elder teamed up on a group of five. Rembrandt did his own set, too, and I’m not even bothering to name the artists who depicted all five senses within a single work. What does Schlesinger bring to the topic that lets him make it his own? As I mentioned earlier, I think he tried to make the personifications more accessible to a wider public. There are no complicated references to mysterious symbols. There’s no need for a deep understanding of mythology to read these canvases. Anyone can stand in front of them and discuss what they’re seeing and what the artist wants to do. It’s a really new and modern interpretation of a topic that’s been reworked for centuries. 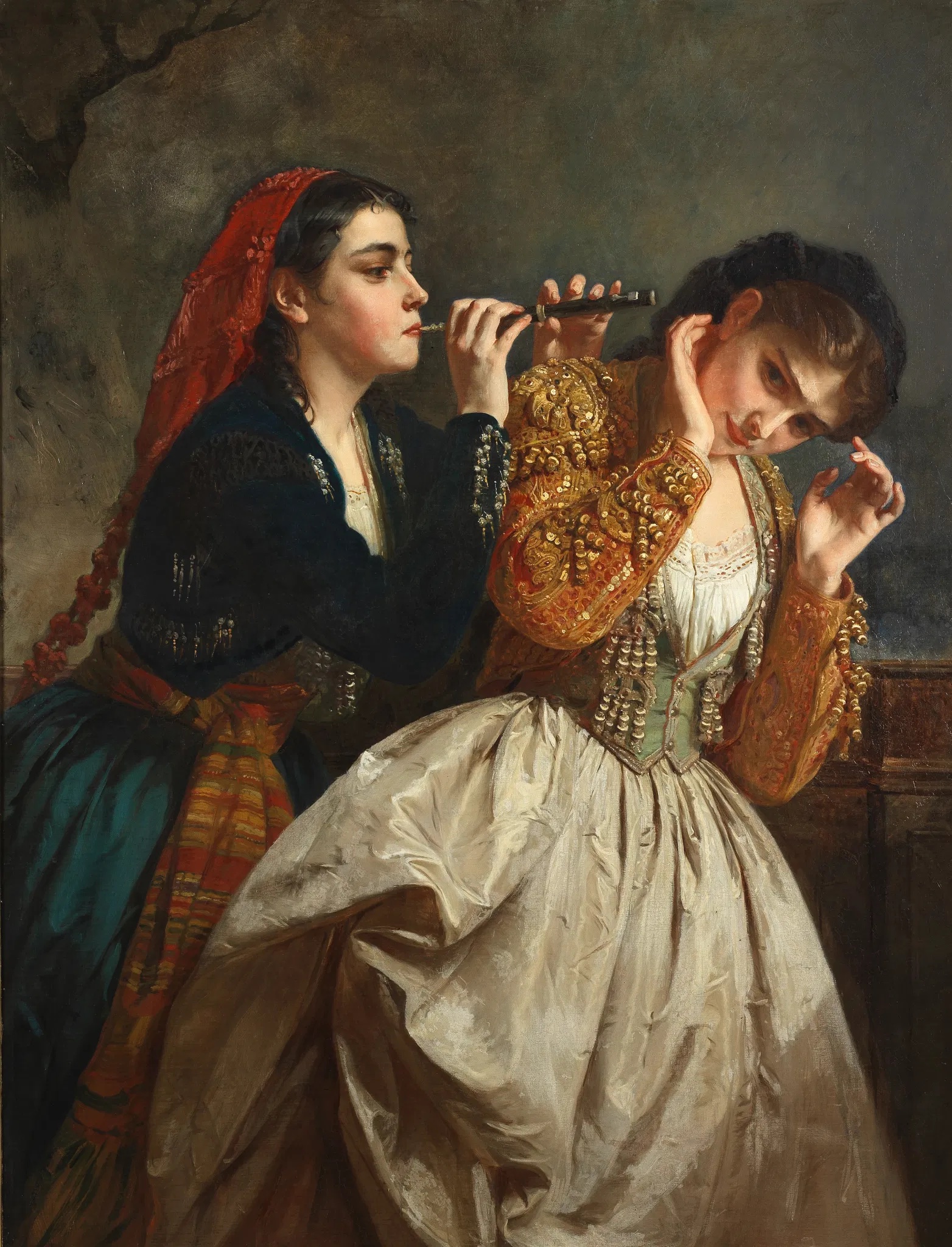 I don’t pretend to be a scholar of images of the five senses, but I’m thinking Henri Guillaume Schlesinger marks his version out by focusing on two young women… They’re very nice, attractive models. One magazine from the time described them as being ladies from Spain and Germany who moved to Paris for work. He used two models to keep the narrative moving, and it let him show off a bit more. He had to build up scenes, and think about how to make them interact to create each of the senses. It makes it more playful as well. It’s a lot of fun to look at. It’s colorful, and nice to the eye.

Did he rely on the same two models for all five paintings? I think they are the same two. It makes more sense for him to keep both for a series of paintings. 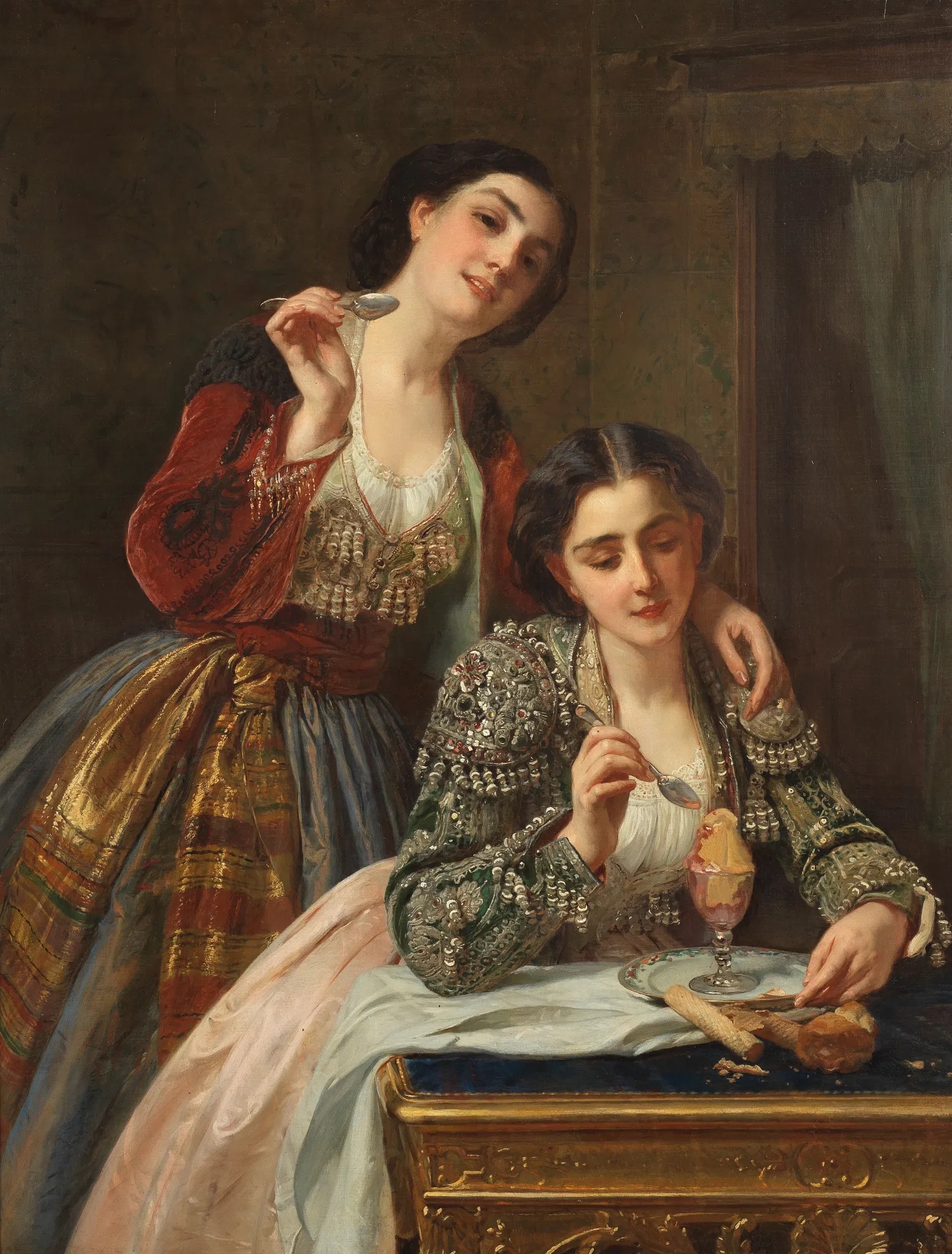 Can we talk a bit about how Henri Guillaume Schlesinger dresses the models and stages the actions and the backdrops? It seems to me that he’s trying to reflect the world of his audience, who either lived like the women in the paintings, or hoped to live that way. For example, he depicts taste by showing the two enjoying a bowl of ice cream. Mass refrigeration was several decades away in 1865, so I’m guessing ice cream was a treat reserved for the rich and elite. I completely agree. Ice cream probably was not cheap at all or easy to find. I think you’re right when you say he wanted the actions to give pleasure to the eyes of the people who looked at them. In a way, he was all about giving pleasure. His rich, lavishly painted fabrics resonated with viewers. They would have been captivated immediately by the colors and the details.

It strikes me, as we speak, that this series is as far away from a religious or history-themed work as possible. It literally shows two beautiful, well-dressed young women indulging in sensory pleasures. Did the paintings draw any criticism for that? At the time, a lot of the [Salon] paintings that won medals were of religious or mythological subjects. In this case, it’s pure genre. In a way, it talks about the tastes of the time. 1865 was five years before the start of the Franco-Prussian War. It’s a specific moment in taste and collecting that goes back to a more frivolous type of genre painting. It’s something easier to live with. It wouldn’t have been popular only ten years before.

Every painting in the Henri Guillaume Schlesinger series features beautiful young women. I’ve heard tell of pendants–portraits painted in pairs–in which the dour old husband and his lovely young bride are divorced by dealers who are only interested in the more salable painting. How impressive is it that The Five Senses is still together as a group of five canvases more than 150 years after they were painted? It is impressive, because I’m sure at some point there would have been pressure to sell them separately. It’s fantastic for us that that wasn’t the case. The artist created the idea and all five are still together with the same narrative, telling the story.

What are the Henri Guillaume Schlesinger paintings like in person? What eludes the camera? When you see them all together, it’s quite impressive. You’re impressed by the quality of the paintings, the brush strokes, the rendering of the fabrics. You’d miss it if you weren’t standing in front of the works. 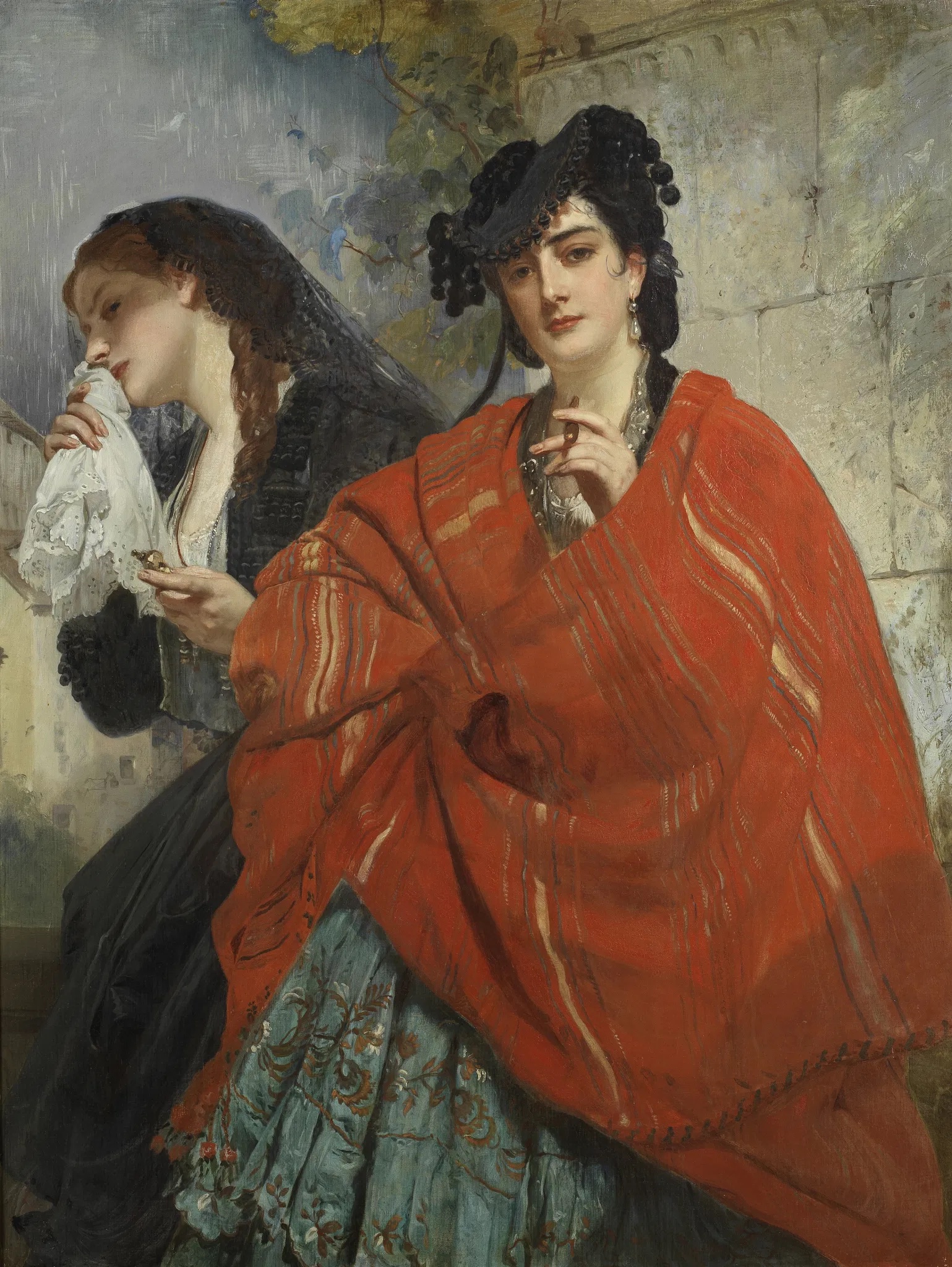 And she’s looking directly at the viewer, almost as if to say, “What are you going to do about it?” I find it very striking and modern for a painting from 1865. It shows how Henry Guillaume Schlesinger is trying to literally create a bit of controversy. He wanted to be controversial, and wanted people to talk about him.

How did the public react to Henri Guillaume Schlesinger’s The Five Senses? Comparing popular magazines against art history magazines and papers, [it’s clear that] people were in love with these canvases.

So, he gambled and won. He succeeded, which is great. 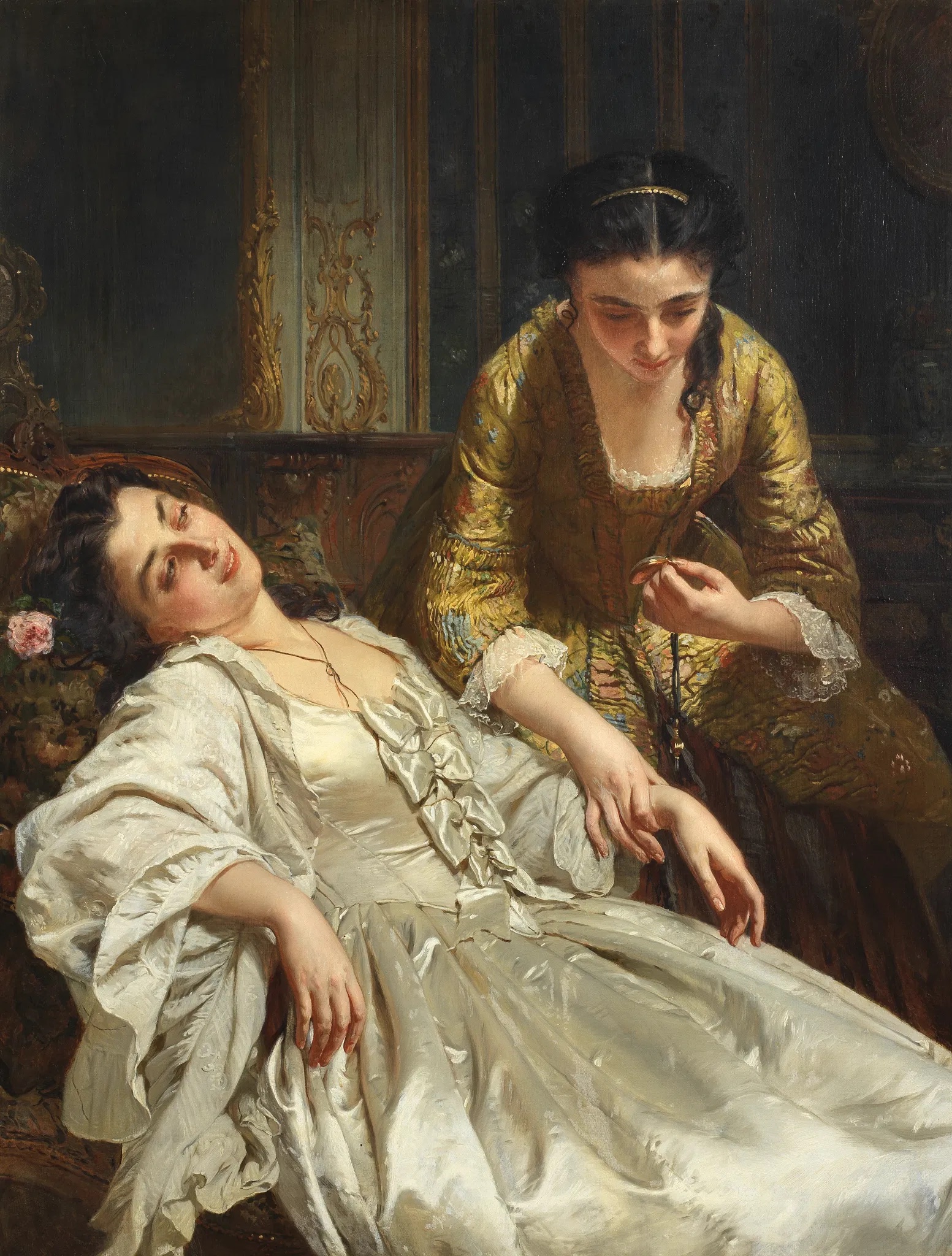 What’s the world auction record for a work by Henri Guillaume Schlesinger? It’s £85,000, for a portrait of Sultan Mahmud II in Constantinople, which sold at Sotheby’s in 2009.

What are the odds that The Five Senses will do better? I think it’s going to be the new world auction record for the artist, given its provenance, its historical importance, its quality, the subject matter–yeah, I think there’s a very good possibility it well sell well above the current record.

Why will this set of Henri Guillaume Schlesinger paintings stick in your memory? I’ve never seen a set of five works. Researching these canvases was something very exciting, and it was exciting to find the photo of them in the Salon in 1865. It was quite a big project, definitely worth the time.

How to bid: Henri Guillaume Schlesinger’s The Five Senses is lot 43 in the 19th Century and British Impressionist Art auction taking place at Bonhams London on March 31, 2021.

Lauren Bacall’s art collection to be auctioned by Bonhams