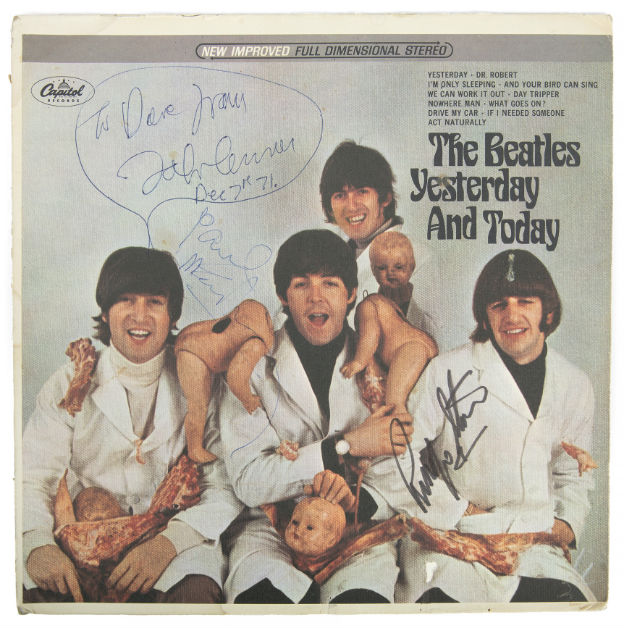 The original ‘Butcher’ cover for the Beatles’ ‘Yesterday and Today’ album, which was hastily replaced, this one once owned and signed by John Lennon.  Julien’s Auctions image

What you see: A U.S first state Butcher album prototype, stereo example, of the Beatles’ Yesterday and Today, which was owned by John Lennon. He inscribed and dated it and drew a sketch on the back cover. Later, the recipient obtained signatures from Paul McCartney and Ringo Starr. Julien’s Auctions estimates it at $160,000 to $180,000.

Let’s start with how this album cover came about. It was offensive in 1966, and many would find it offensive now. How did this image get chosen for the album cover? How did it advance as far as getting a press run of 750,000 before it was stopped and recalled? It was a time toward the end of the Beatles as a group, working together. They were jaded and tired and exhausted [with] another photo shoot, another album. Bob Whitaker shot the photo. Some say it was a message against the war in Vietnam. Another theory was that Beatles albums in the USA were not exactly the same as the format in the UK, and the four guys felt their albums were being butchered.

But it was not shot as an album cover. How did it end up on the cover? I think they got together and decided it would be amazing and send a message, whatever the message they thought they were sending. They were young lads. They had produced a new album every year. They had this experience [the photo shoot with Whitaker], this fun event and decided it would be the cover of the album.

All four Beatles were in favor of putting it on the cover? Yeah, I think they were. Their lives were changing. They wanted something that was almost rebellious in a way, and they went along with it.

Do we know how many copies of the first state version of the Butcher cover – the ones that escaped into the market and were not covered with the replacement shot of the Beatles posing in and around the trunk – exist? Capitol Records sent it to retailers and radio stations and leaders in getting the message out about the upcoming album. Advance copies. Once it was out, [people] started to question it. Capitol Records recalled it. I expect at the time the sentiment of the people who didn’t like it returned it to Capitol Records and wanted a replacement one. 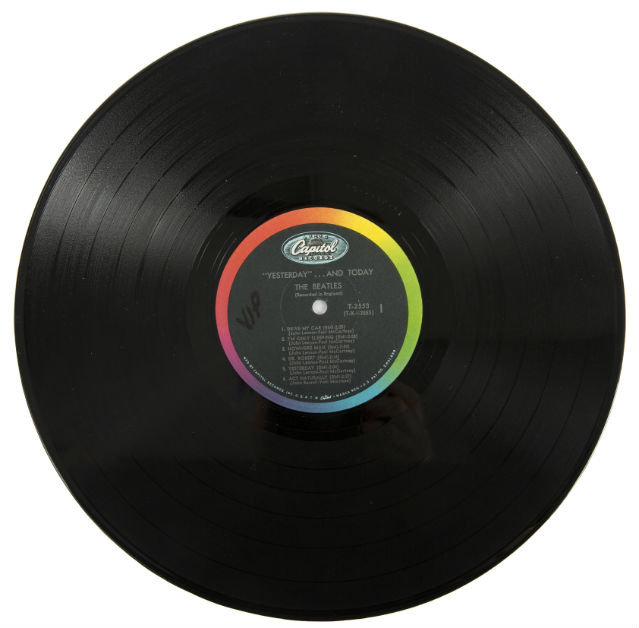 Side One of the Beatles ‘Yesterday and Today’ album, which opens with ‘Drive My Car.’ Julien’s Auctions image

But do we have numbers on how many first state Butcher covers are out there? I’ve seen maybe five in the last 15 years. We also had the original album, the replacement and additional photos related to the whole debacle. [Juliens’s sold the collection as a single lot in 2013 for $38,400 against an estimate of $30,000 to $40,000.]

Do we know how many first state Butcher prototype covers are out there? We do not. But what we should really focus on is it was John Lennon’s first state Butcher prototype cover. We sold Ringo Starr’s copy of the White Album for $790,000. Before that, the highest [the record for the most expensive record sold at auction] was an Elvis Presley record that sold for $300,000. This was Lennon’s, and he had a quote saying the cover was a comment on the Vietnam War – “If the public can accept something as cruel as the war, they can accept this cover.”

So Lennon was a proponent of the cover? Exactly. And the fact that this hung in Lennon’s apartment [in The Dakota in New York City], and it has John’s drawing on it – it’s an amazing part of this.

This is why I want to break it down, because there are a lot of moving parts here. Let’s subtract the Lennon provenance. A first state Butcher album cover prototype is pretty damn valuable on its own. It’s valuable. It’s really important. Collectors love to handle something like that and ideally it hasn’t been handled or opened or played. John Lennon did open and play it.

The John Lennon inscription is valuable on its own. Obviously, John Lennon is no longer with us. Anything signed by John Lennon has value in and of itself. Among the Beatles, he’s the most highly collectible.

The John Lennon artwork is valuable on its own. His drawings sell for a lot. We sold a concept sketch drawing for Sargent Pepper for $87,500 in 2017.

And it’s signed by all the Beatles except George Harrison. [Laughs] Dave Morrell [who received the record from Lennon] was a young guy in 1971. Later, when he saw how the collectibility of the Beatles was going, he thought it would be good to have all four signatures. George Harrison passed in 2001, but he got Paul and Ringo to sign. It’s hard to do [get signatures from the surviving Beatles]. They rarely sign anything these days.

I imagine he tried to get George Harrison’s signature? Surely, he would have tried. Harrison was reclusive, and not as accessible as Paul or Ringo.

If the album had signatures from all four Beatles, would that raise the estimate? No, it wouldn’t. It would factor into the winning bid, not the estimate. Three out of four isn’t bad.

You sold Ringo Starr’s copy of the White Album for $790,000 against an estimate of $40,000 to $60,000. Is the estimate on Lennon’s Butcher cover conservative? When we did the Ringo auction, he was a gentleman to work with. We had everything finished on the catalog, and he asked to meet with us in London. He told us, “I’m going to give you something very special.” It had been in a bank vault for about 35 years. Everyone speculated that John Lennon had the first copy of the White Album, but it was Ringo. He wanted a reserve of $60,000. We said absolutely. We were so amazed by the reactions. It was just phenomenal, a world record. But to answer the question – we placed a conservative estimate. We can’t determine where it will end up.

What are the odds that Lennon’s Butcher cover will break seven figures? [Laughs] I certainly hope so, but you never know. It’s an auction. The sky’s the limit. We’re doing the auction in Liverpool, which adds to the hype. John Lennon’s artwork, the signatures, it’s a prototype of an album that was recalled, it all plays into what goes down on May 9. 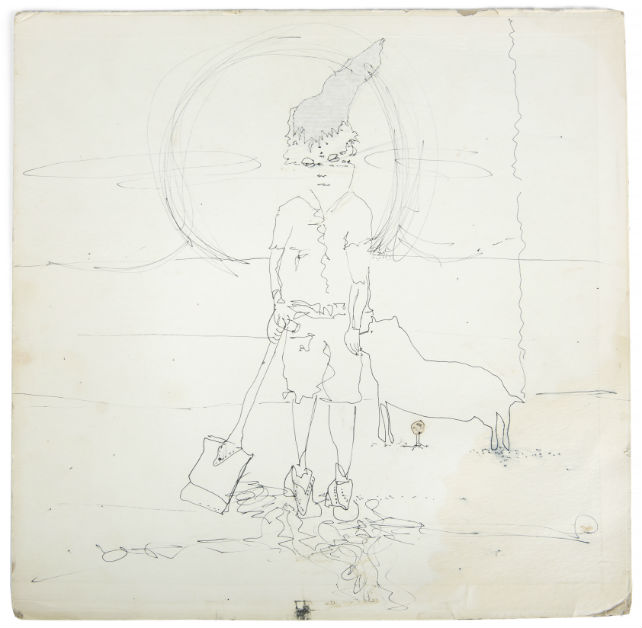 The John Lennon sketch drawn on the back of the album cover. Julien’s Auctions image

Lennon traded this to Morrell for a reel-to-reel bootleg. For those who don’t know, can you explain a bit about bootleg culture, and explain why Lennon would have traded this album for a bootleg? It’s still happening today, exchanging and swapping [recordings made at concerts and other venues]. With Beatles memorabilia, there’s a huge network of people plugged into that. John Lennon was no different. Morrell had a Yellow Matter Custard bootleg. Lennon wanted it.

But we value that Lennon Butcher cover a lot differently in 2019 than Lennon and Morrell did in 1971. Can you explain why the trade made sense to them? Even though the concept of collectibility wasn’t as strong then as now, it was recognized as a collectible album, because of its notoriety. In 1971, people were keeping the cover with the original, controversial art. It wasn’t that unusual back in 1971 not to place a value on an item. They wanted to say they owned it. It was not monetarily driven like it is today. Lennon surely thought that getting his hands on the recording was more important to him at the time. He could get another album cover on his wall if he still needed it. Morrell was not interested in monetary value. He in turn got something he wanted.

Are there any period pictures that show the album hanging on the walls of Lennon’s apartment in the Dakota? I don’t know, but I’m not aware.

Is this the first time it’s come to auction? As far as I’m aware, yes.

The auction is planned for Liverpool. Did you get the consignment first, and then choose Liverpool, or did you choose Liverpool and then secure the consignment? We’ve been working with Liverpool for many years. We’ve done discovery days for the last three years, and we’ve uncovered some really interesting items. We thought it would be cool to hold a Beatles auction there at the Beatles Story Museum in Liverpool. This album came as a result of the call. Once the press release [about the sale] went out, we got the call.

Have you held the album in your hands? I had it in my hands Monday morning [March 25]. This gives me chills. There was so much controversy when it came out. John Lennon signed it, and it was on his wall. Fifty years later, we’re talking about it. I’ve never seen an album like this. There are so many variations of collectibility in one album. There’s so much history, so many stories to be told.

How to bid: John Lennon’s copy of the first state prototype Butcher album cover is lot 266 in Music Icons: The Beatles in Liverpool, an all-Beatles auction conducted by Julien’s Auctions. It contains more than 200 items, and takes place on May 9, 2019.

Important American, Asian artists stand out at Michaan’s May 11
Scroll to top