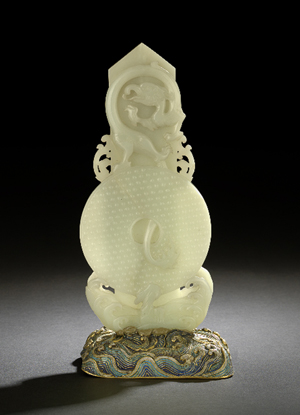 Jade carving is a strong artistic thread that runs through the history of China. Jade artifacts are unearthed at prehistoric sites, powerful Emperors valued the material above gold, and modern collectors are avidly bidding on fine antique examples in auctions around the world.

In his survey Art in China, British art historian Craig Clunas states, “Jade, or more precisely nephrite, was first used by one of the cultures of the Chinese neolithic between 6,000 and 5,000 B.C.E. A mineral of extreme hardness, it cannot be carved with a metal blade, but must be worked with abrasive sand in a procedure of slicing and drilling which involves great expenditure of time and skill. Therefore, at a very early period, it became associated with power: temporal power, in the sense of control over resources, and by extension with spiritual power.”

Major museum collections contain precious jade plaques, pi disks, and ritual vessels from the Shang, Zhou, and Han dynasties of the second and first millennia B.C.  In a late 2nd century B.C. burial site found not far from Beijing, a prince and princess were laid to rest in suits of jade.

Two types of compressed metamorphic rock are commonly called jade. The mineral nephrite, ranging in color from white to various shade of green, was available at sites in China and acquired from sources on the Silk Road trade route. Jadeite in bright emerald green and other colors, found in Burma, was imported into China after 1800 A.D.

Most jade offered for sale today was carved in the 18th and 19th centuries of the modern era. Highly prized are pieces made in a period of intense artistic creativity during the long reign of the Qianlong Emperor (1736-1795 A.D.) of the Qing Dynasty. Still on view at the Palace Museum in Beijing is the largest jade carving in existence. The monumental boulder of mottled nephrite (over 7 feet high) is covered with exquisitely carved landscapes completed in 1787.

Inspired by such masterworks, serious collectors in Asia are searching the world for new acquisitions. Internet access to American auctions has produced a lively West to East trade in antique jade. Like many other firms, New Orleans Auction Galleries now offers a significant number of Asian lots in their general sales. Last October a large collection of jade produced some noteworthy prices, including a carved mountain scene that brought $16,800.

After the sale, president Jean Vidos said, “Over the past several years, the international market has just blossomed. The Internet has leveled the playing field when we’re competing for dollars against the big boys. Not a whole lot of stuff is slipping through the cracks any more.”

“We had Asian buyers bidding on Asian stuff in New Orleans, and that’s a great change from 10 or 15 years ago. Even during the recession, the Chinese have been vigorously bidding on stuff. Although the downturn has affected the economy worldwide, the Chinese have apparently figured out a way to buy. They’re really aggressive buyers and this sale happened to be really heavy duty with Asian.”

NOAG’s Asian specialist Rick Rhodes explained the appeal of the simple mountain carving: “It goes back to the tradition where officials and civil servants always wanted to retire to nature. They wanted to get away from the bustle of the court. So they would have these mountain scenes carved in jade that they could put on their desk and contemplate. They would feel like they were in the countryside. Because these carvings were sought after by the literati, many Chinese collectors of today go after that sort of thing because it’s still a way to escape from the pressures of modern society.”

Success in the jade marketplace brought out more consignments, and a masterpiece emerged from a private collection in central Louisiana in May of this year. The complex 18th-century white jade carving featured a pi disk surmounted by a dragon on the front and a spirit tablet with symbols on the reverse. The lot had a modest estimate of $3,500-5,000 but determined bidding took the carving to a stunning $334,000.

“When selling things at auction, bidding always involves emotion,” said Rhodes. “There were two bidders on this particular piece, one was from mainland China, who had comes all the way over here and spent a whole day looking at the piece, and the winning bidder was from London. Two different sides of the world. You reach literally the entire world. Anyone who has a computer can access the auction and bid live from their computer.”

Rhodes said, “There seems to be a very, very strong market right now for really good quality jade. The Chinese are very discriminating buyers. We have done really well with jade. That May sale also included a beautiful group of a mother monkey with two smaller monkeys. It went for a great deal of money for what it was, $34,440.”

“The monkey group was made from a piece of nephrite with two colors – a dark olive green and a lighter green. The carver was very skillful, the mother is the dark color and the baby on her shoulder is a lighter color – it has a nice contrast to it.”

“Buying jade is a very personal thing,” Rhodes concluded. “A lot of it has to do with your perception of the stone and your experience in handling it.”

Other regional auction house have had similar good results. In response to market demand, Leslie Hindman Auctioneers in Chicago is gathering consignments for their first dedicated Asian sale on October 26. Hindman said, “We’ve done very well, and we’re offering this fall sale because of the interest. She confirms that much of the bidding is coming directly from China, adding, “And some of it’s coming from New York but they’re bidding for people in China.”

Andrew Lick, the firm’s specialist in the field, explained, “We’ve always included Asian pieces in furniture and decorative arts auctions, but we’ve seen enough interest that it would be beneficial to have a sale for Asian works of art. We’ve had good collections of Chinese textiles, beautiful lacquer work, archaic bronzes, netsuke, jade – they’re all coming from private consignors and they’re new to the market.”

“The money flowing into the jade market is coming from mainland China. (Dealers in New York and London interested in the pieces but a lot of competition from China.) I think the Chinese are more comfortable buying pieces that are in the U.S., because there so many reproductions coming out of China right now. If they can purchase something that has been in an American collection for decades, it gives them a greater sense of comfort.”

In February 2009, Hindman’s sold a beautifully carved Qing Dynasty nephrite vase or brush pot for $96,400.  Lick explained, “The piece had been purchased by New York collectors at Spink & Son in London in 1977, and we had the paperwork for it. That was a good example of having the provenance on a piece.”

“We have bidders that fly in from Shanghai for our sales and stay in Chicago,” he said. “They know what they want, but they’re looking at what everyone else in the room is bidding on too. They’re observing other Asian bidders and seeing what’s going where. When they see the excitement of the room go up on a major piece, sometimes they’ll jump into the bidding.”

Lick pointed out, “The white jade and other pale colors are the most desirable right now.  I think that was the reason that yellow-jade lidded vase did well. But as in any other medium, it’s the quality and the age. If you have a very well-carved spinach jade piece, it can be worth just as much.”

Dallas Auction Gallery is another regional firm that has responded to the strength of the Asian market. Following their successful sale of Asian Antiques and Fine Art on March 10, they have scheduled another specialized sale for October 6, 2010, which will feature furniture, ivory, jade, and other decorative arts.

From the earliest human settlements in China to bustling 21st-century society, carved jade continues to fascinate collectors. Admire it, touch it, own it – the material’s mystical appeal is hard to resist. 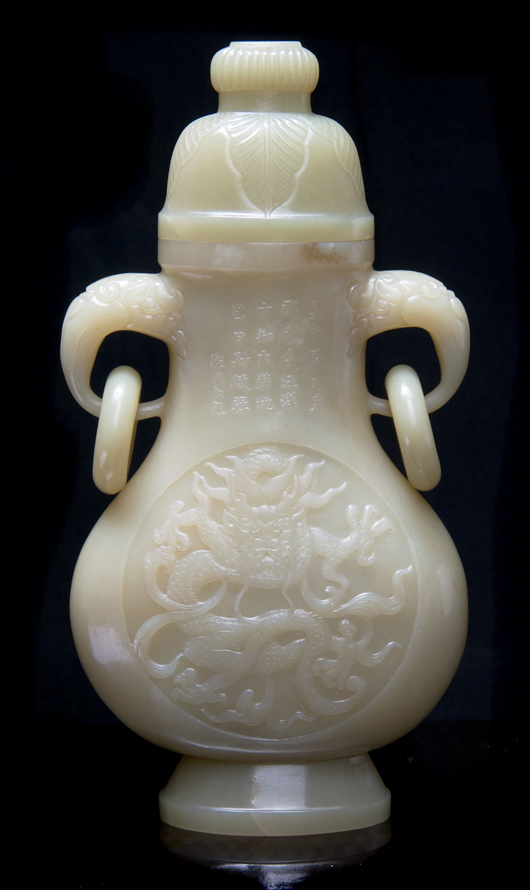 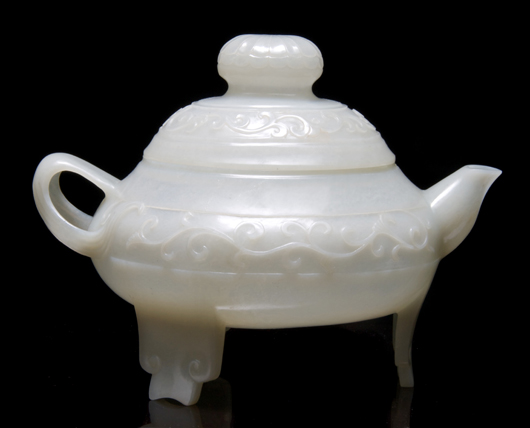 In January, this translucent jade teapot with lotus finial and vines in relief on the sides brought $19,520 at Leslie Hindman’s auction in Chicago. Courtesy Leslie Hindman Auctioneers 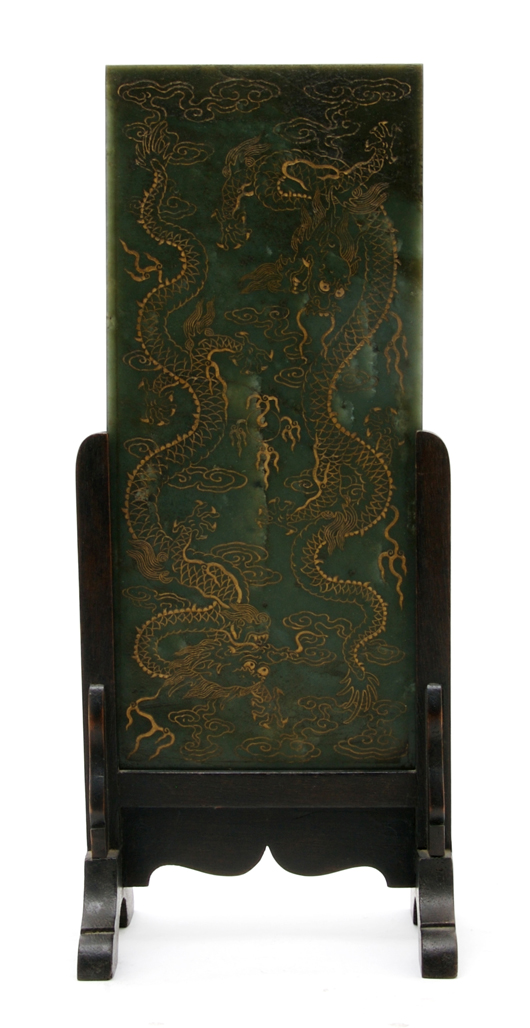 A rectangular plaque of green spinach jade carved with two dragons on either side of a flaming pearl realized $20,740 in Hindman’s October 2009 sale. Courtesy Leslie Hindman Auctioneers 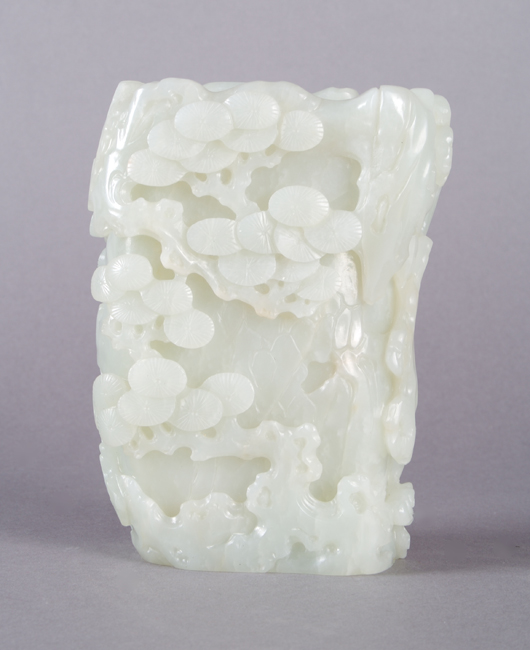 A well-documented provenance adds value to this pale jade vase dating to the long reign of the Qianlong Emperor in the 18th century. Carved with trees and rocks in relief, the object sold for $96,400 in a February 2009 Leslie Hindman sale. Courtesy Leslie Hindman Auctioneers 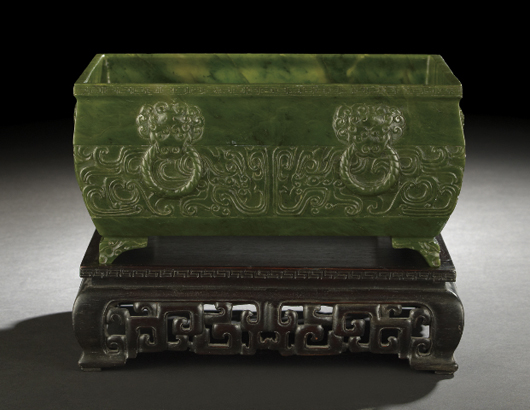 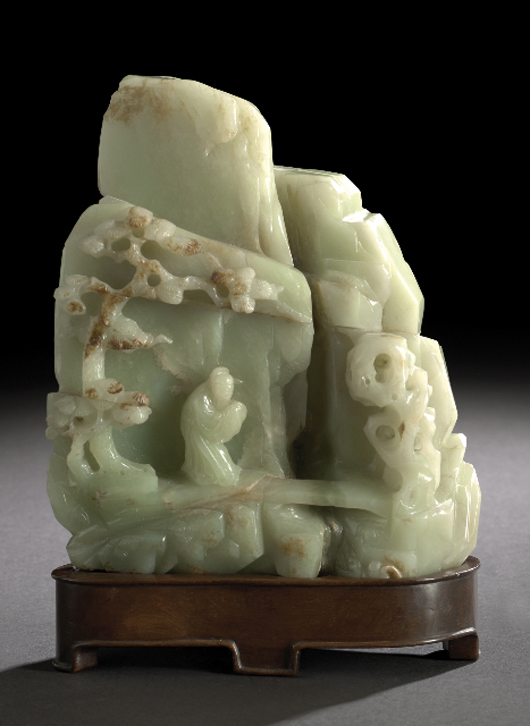 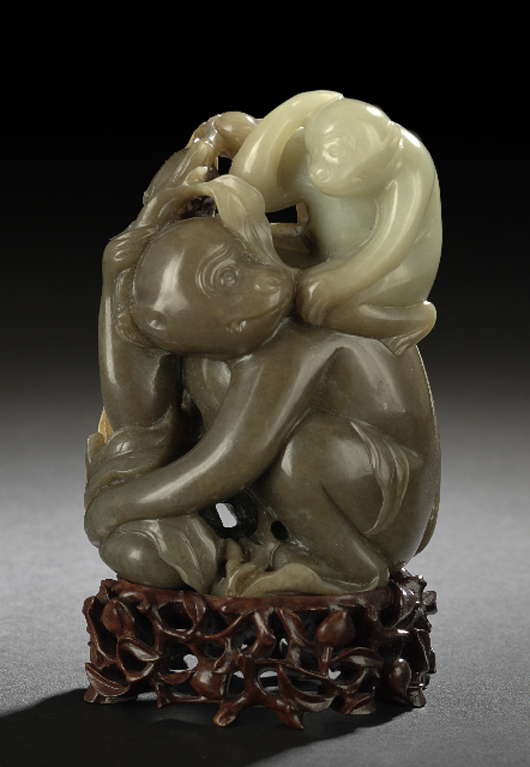