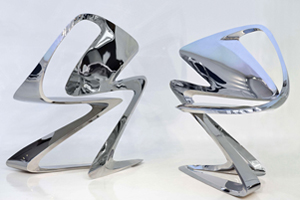 Also on display in the Philadelphia exhibition is one of Hadid’s newest designs – the highly polished Z-Chair (2011) – produced by Sawaya & Moroni of Milan. Courtesy Philadelphia Museum of Art.

PHILADELPHIA – Zaha Hadid is best known as an innovative architect with an international practice. In 2004, she became the first woman to win the prestigious Pritzker Architecture Prize. Her firm in London – Zaha Hadid Architects – was just awarded the Royal Institute of British Architects’ Stirling Prize for the second year in a row.

The winning project this year was the Evelyn Grace Academy in Brixton, England. The firm won last year for the MAXXI Museum of 21st Century Art in Rome. Her first American work was the 2003 Contemporary Arts Center in Cincinnati, Ohio. Viewers around the world will see the London Aquatics Centre she created for the 2012 Summer Olympics.

Hadid, born in Baghdad, Iraq in 1950, is very much a living designer. She received a degree in mathematics from the American University in Beirut and was awarded the Diploma Prize by the Architectural Association School of Architecture in London in 1977. Many Americans know her work from a 2006 retrospective exhibition at New York’s Guggenheim Museum.

Fortunately for collectors, Hadid has far more strings to her bow than just architectural design. A new exhibition , Zaha Hadid: Form in Motion on display in the Perelman Building of the Philadelphia Museum of Art through March 25, 2012, features the breadth of her creative range from buildings and furniture to shoes and jewelry.

Kathryn Bloom Hiesinger, the museum’s Curator of European Decorative Arts after 1700, explains, “The exhibition has about 20 objects or groups of objects in a setting that Hadid herself is creating. As an architect, she sites the objects in the space as if they were part of the architectural program. So everything is carefully placed to relate to her interior architecture and to each other. It’s the first time she’s done such a thing in the United States.”

“We do a design exhibition every year, and we’re supported in that by our affiliated group called Collab,” continues the Curator. ”They’re a group that focuses on product design, so that was an aspect of her work that we wanted to emphasize as opposed just to her architecture.” Collab, a volunteer committee of professionals and enthusiasts supporting contemporary design at the museum, will award Hadid their Design Excellence Award on November 19th.

Hiesinger says, “Hadid envisions the gallery as an active element in the display of her own designs, and will create an immersive environment from top to bottom. She is designing this amazing undulating wall system behind which a video will be projected that shows the whole breadth of her work – architecture master plans and product design. The outer surface of this screen wall serves as shelving for smaller design objects – for example, her Lacoste shoes.”

The Curator concludes, “From a market standpoint, she actually designs for two markets – for the high end gallery market and for limited and mass production. Her works are, at the same time, art objects and functional objects. She makes something you enjoy looking at, something you enjoy living with.”

Prominently featured in the exhibition are Hadid’s furniture designs, which are directly influenced by her architectural style. Beautiful and functional, the furniture on display includes the fiberglas Mesa Table and polished aluminum Crater Table, both from 2007, and this year’s Z-Chair produced by Sawaya & Moroni of Milan.

These brilliant furniture designs have captured the imagination of collectors of contemporary design. Since Hadid is a living artist, however, enthusiasts must make difficult decisions about what to buy now, while the artist continues to create new products.

When Hadid furniture comes up at auction, prices regularly fall in the five and six-figure range. For example, Phillips de Pury in New York sold a black Aqua Table – produced circa 2006 by Established & Sons U.K. – for $110,500 last December. The work was number four of a limited edition of twelve.

Wright auctions in Chicago is another firm which handles Hadid furniture and decorative art designs. Richard Wright says, “Zaha Hadid is among the most influential and forward thinking architects of today. Her importance in the field of architecture makes her designed objects desirable as well. She is innovative and has a distinct style within her industry.”

Wright stresses that buyers should be and are selective when buying Hadid’s furniture and decorative arts on the secondary market: “The application of architecture to designed objects is challenging and in my opinion her success is varied. Hadid’s works in silver are my favorites from her oeuvre.” In 2009, Wright sold a sterling silver TCTHADID tea and coffee service, made in limited edition by Alessi, for $21,250.

He comments, “This work best captures her architectural eye and the fluid nature of her work. Another successful work is the Wave Sofa with the detached back and stylized seat. This form illustrates an early and one of Hadid’s better explorations of interior space via a designed object.” An example of this 1988 sofa design brought $18,750 at Wright in April. 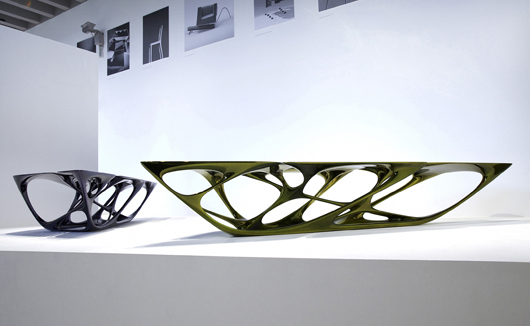 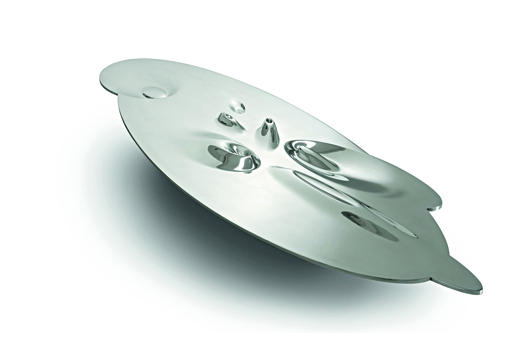 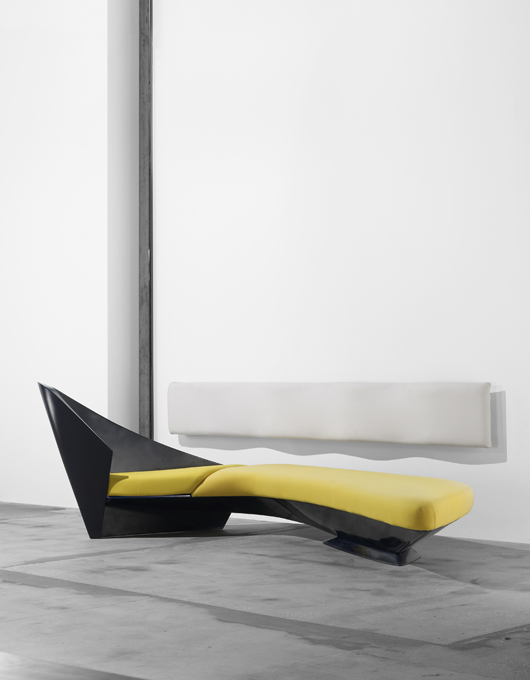 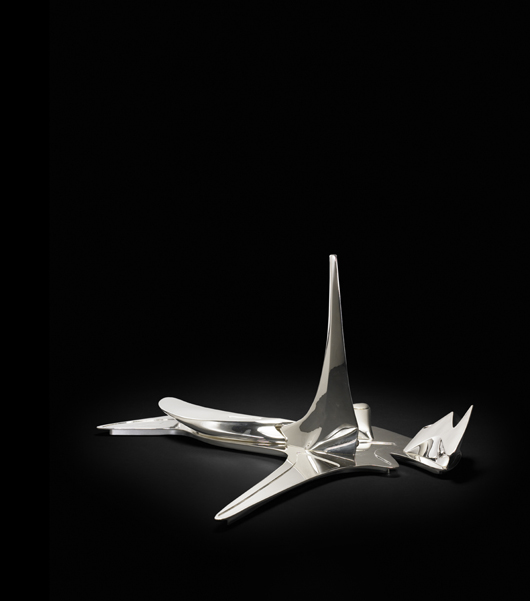 Richard Wright says, “Hadid’s works in silver are my favorites from her oeuvre.” The designer’s TCTHADID sterling tea & coffee set (2003), made in limited edition by Alessi, sold for $21,250 in 2009 at the Chicago auction house. Courtesy Wright. 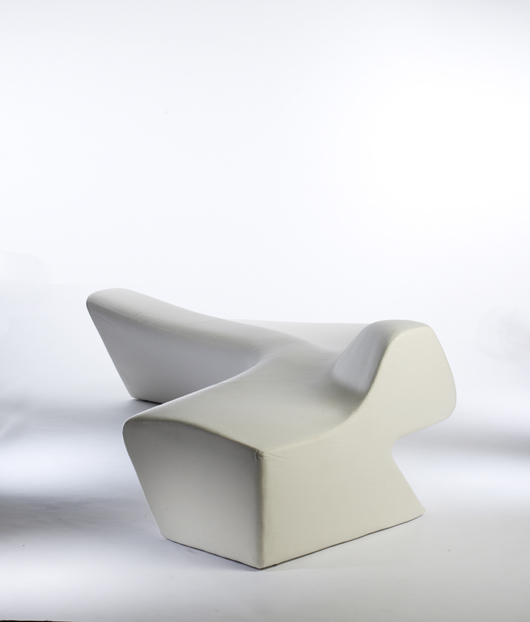 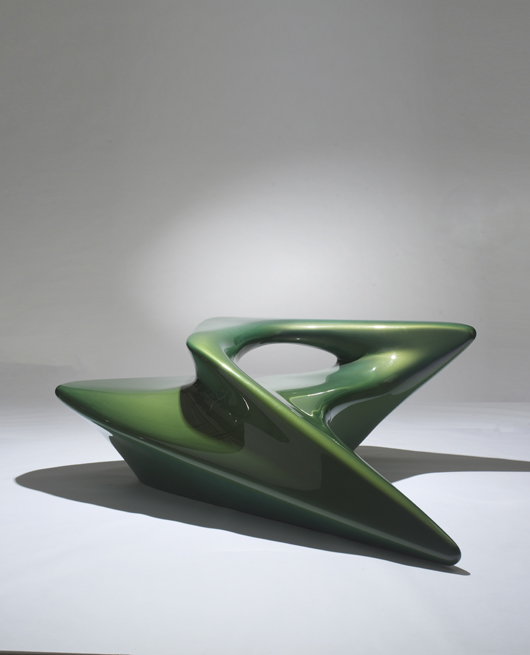