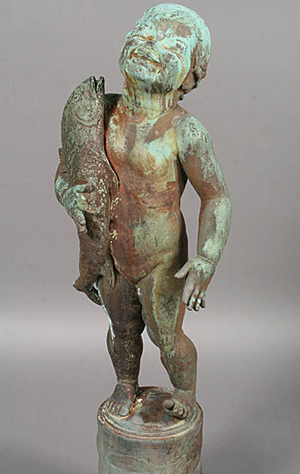 Edith Barretto Parsons (1878-1956) sculpted a collection of charming youngsters holding animals for use as fountain figures. A bronze version of her ‘Fish Baby,’ circa 1920, sold for $9,000 in the spring 2011 auction. Courtesy Kamelot Auctions

Putting up sculpture in the great outdoors is one of man’s oldest compulsions. Religious devotion may have been the first motivation, but politics, aesthetic impact and human ego soon crept in. A pharaoh in ancient Egypt was pleased with the perfectly aligned row of sphinxes he had erected along the temple boulevard. He said, “That looks great. People will be impressed. Put my name on it.” The rest is history. Sphinxes flourished, and collectors still put them outside in the garden today.

Classical civilizations in the Mediterranean established a link between gardens and ornamental sculpture, which has survived to the present. In his introduction to Antique Garden Ornament, the essential reference on the subject, John P.S. Davis writes, “The Greeks and Romans were the first in Europe to create large gardens where not only plants, trees and nature followed man’s designs, but which were also adorned with marble and bronze effigies of gods and heroes. The contribution of these classical sources was to have far reaching effects on gardens throughout the Western world. This influence is still clearly evident in many gardens today.”

Hadrian, the Spanish-born ruler of the Roman Empire, A.D.117-138, set the standard when he laid out the grounds of his villa at Tibur, the modern day Tivoli. Just like modern collectors, the emperor admired works of art he had seen in Egypt and Greece. He constructed water features and grottoes adorned with statuary in various earlier styles. In the 16th century, Cardinal d’Este “collected” sculpture from Hadrian’s backyard to decorate the grounds of his own villa nearby.

The character of public and private gardens in America probably owes its greatest debt to traditional English design. Davis explains: “By the early 17th century, the ornamentation of British gardens with statuary was being used to create a direct link between the house and garden. The garden no longer stood as a separate, individual work of art, but complemented and related aesthetically to the house.”

In other words, a collector might decorate his front hall and a garden pavilion in similar fashion. Davis continues, “At the same time there was a growing interest in the classical marble statues excavated in Italy. Lord Arundel in particular took a great interest in these, and bought a considerable number which he used to decorate his house and gardens at Arundel House.”

Collecting vintage garden sculpture, seating, and containers has become an important specialized field within the antiques marketplace. Kamelot Auctions devotes a spring sale to garden and architectural antiques. The 2012 auction with over 700 lots will be held on Saturday, April 14. In the area of statuary, price points range from five figures for monumental bronze sculpture to $100-200 bargains for simple figures. Everyone can afford a gnome of their own.

Kamelot’s resident expert Jeffrey Henkel says, “The average retail customer who walks into the sale is looking for something that is manageable in scale and weight. The larger pieces are true sculpture, whether you place them in a garden or in an interior setting. The casting is so good on some of those pieces from the 19th century that they could have been used inside.”

The star of this year’s sale, a life-size bronze copy of the Diana of Gabii in the Louvre, will open the bidding. The draped goddess, which carries a $15,000-20,000 estimate, could hold her own in a line-up at Hadrian’s ancient villa.

Henkel notes: “She’s fastening her cloak at the shoulder – there’s something very elegant about it. The surface has gorgeous, gorgeous patina. Perfect – great design, great style, great height. This is destined for an important garden because it’s not inexpensive.”

Note that, although bronze is a traditional material for outdoor sculpture, it should be placed in a secure location because of its value.

Henkel says, “I track garden material all year but in the last three or four weeks, the prices for bronze—human or animal figures—are staggering. There seems to be a positive upward movement in our industry for great examples of garden objects. We try to get collections that have been in private hands. I spend all year searching for those items, but we try to have something for every collector.”

“In this sale, we’ll have bronze, marble, limestone and cast-stone or cement,” Henkel continues. “There’s one collection that came from a Long Island estate, outside of Oyster Bay; it was put together at the turn of the century. They’re very large limestone figures, and I’m thrilled to have them.”

The monumental, classically garbed male and female figures in question are estimated to bring $4,000-$6,000 each.

Animal figures are also popular with collectors. Among the pride of lions in the April sale are a monumental Philadelphia Centennial cast-iron pair, circa 1875 (est. $20,000-$30,000 and an appealing French terra-cotta male, circa 1910, that would fit in any garden (est. $600-$900). One of the more unusual figures, a signed bronze statue of an American Indian chief, 69 inches high, bears a $1,000-$1,500 estimate. Henkel adds, “I personally like the bigger, bolder things which make a statement.”

Choosing a garden figure is most often an affair of the heart, but collectors should begin by learning more about various materials. What will hold up best in snow or heat is an important point to determine. The book by John Davis on Antique Garden Ornament devotes separate chapters to metals including bronze, cast iron and zinc; natural stone, especially marble and limestone; and man-made materials such as Coade artificial stone and concrete.

Experts warn against trying to clean garden antiques. Their weathered appearance is part of their charm and adds value.

Beware the weeping angel and any sculpture with mourning symbolism that may have been lifted from a cemetery. Sculpture also disappears from public parks and private yards, so find a way to secure valuable pieces.

Any statue that cannot survive extremes of temperature should be covered or wheeled indoors during the winter.

Get more inspiration for sculptural groups outdoors in Antiques from the Garden by Alistair Morris, a new edition is available at www.antiquecollectorsclub.com, and in Antique Garden Ornament: Two Centuries of American Taste by dealer Barbara Israel. 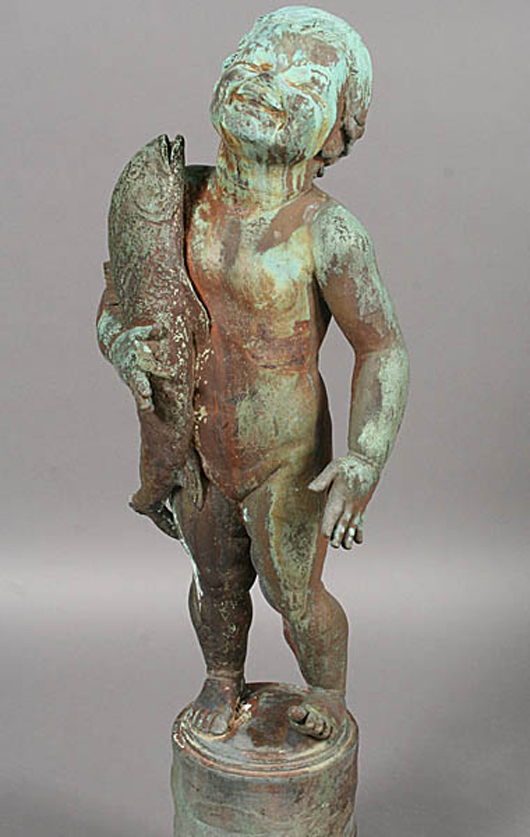 Edith Barretto Parsons (1878-1956) sculpted a collection of charming youngsters holding animals for use as fountain figures. A bronze version of her ‘Fish Baby,’ circa 1920, sold for $9,000 in the spring 2011 auction. Courtesy Kamelot Auctions

An Egyptian Revival figure of a wine bearer, 62 1/2 inches tall, sold two years ago for $4,600. The cast-iron statue, circa 1870, was Continental, possibly French, in origin. Courtesy Kamelot Auctions

This life-size bronze Diana will be offered in the upcoming Kamelot sale of Garden and Architectural Antiques on April 14—estimate $15,000-20,000. The elegant classical figure, a copy of the marble Diana of Gabii now the Louvre, was cast in the 19th century by the English firm of Elkington Mason & Co. Courtesy Kamelot Auctions 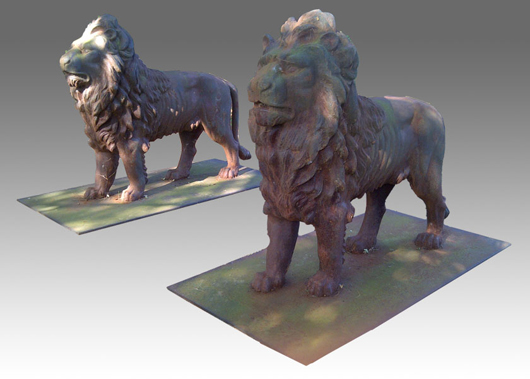 A Philadelphia find, this pair of monumental cast-iron lions, circa 1875, is estimated to bring $20,000-30,000 in the April Kamelot sale. Courtesy Kamelot Auctions

Perfect for the classical garden, a 19th century Italian marble term in the form of a spirited satyr carries an estimate of $5,000-$8,000 in Kamelot’s April sale. Courtesy Kamelot Auctions