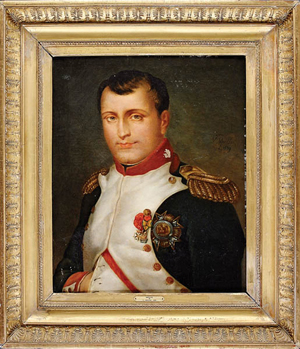 An 1839 oil on canvas portrait of Napoleon in uniform signed by V. Varillaz will be offered in New Orleans in the April 21-22 sale (estimate $4,000-6,000). Courtesy Neal Auction Company

WASHINGTON – The journey of Napoleon from successful general to decorative arts icon is a fascinating chapter in art history. While his attempt to engineer political unification on the scale of ancient Rome ultimately failed, his patronage of a classical style we still call “Empire” continues to enchant collectors.

Just as antiques bearing Napoleon’s image attract attention in the marketplace, a Napoleonic connection will draw visitors to an exhibition. The Hillwood Estate, Museum & Gardens in Washington, D.C. has extensive collections of both French and Russian fine and decorative arts.

The current exhibition, The Style that Ruled the Empires: Russia, Napoleon, and 1812 – on view through June 2, 2012 – brings together paintings, porcelain, glassware, costumes and armor from the period. Scott Ruby, Hillwood’s Associate Curator of Russian and Eastern European Art who organized the show, says, “We’re focusing on the period of the invasion of Russia, and then the subsequent table-turning done by the Tsar on Napoleon, when the Russian army marched on Paris and took the city.”

Princes and Popes had been excavating Greek and Roman antiquities since the Renaissance, while commissioning new works based on these prototypes. Napoleon favored a more robust, archaeological interpretation of these ancient artifacts, which became the Empire style. As he strove to build a political empire, he surrounded himself with classically-themed furniture and paintings that reinforced his goals.

Ruby points out, “It was a way of legitimizing his rule. By associating himself with the great rulers of antiquity, he could become a great ruler in his own time. The interest in antiquity had been alive since the Renaissance. Under Napoleon, there was a distinctive change. Rather than the more feminine style that was favored in the time of Louis XVI, the Empire style employed a more accurately antique style of ornament.”

The fashion was not confined to France but spread throughout the civilized world. The curator continues, “There was a lot of innovation coming from France, but it was also very international. So it was a period when there was kind of an international embrace of this style throughout most of Europe and in Russia.”

In the exhibition, a comparison of French and Russian porcelain reveals that both were equally influenced by classicism. As Ruby puts it, “We have a couple of Sevres plates that we paired with a Russian imperial vase from our collection. It’s really difficult to tell the difference – is it French, is it Russian? They both use antique elements.”Napoleon and his extended family demonstrated a type of physical charisma that would have projected well in today’s televised political world. Although denied modern media, he circulated his image through sculpture, paintings, and prints. His siblings, who shared his Corsican good looks, were given titles and roles to play in his Empire.

The Hillwood exhibition includes a portrait miniature on ivory of his sister Elisa Bonaparte painted by court artist Jean-Baptiste Isabey (1767-1855). Scott Ruby explains, “Her costume exemplifies the fashion at the time; she’s wearing a dress with an Empire waist in a diaphanous fabric. Her hair is done up in an antique style. She was quite a powerhouse in her own right.” As Grand Duchess of Tuscany, Elisa revived use of marble from Carrara in Italy, which was used to make busts of Napoleon circulated in the newly conquered territories.

Empire fashions in costume and furnishings also became popular throughout North America with up-to-date consumers eager to display the latest styles. France was also influential because it claimed a large section of the continent stretching north from Louisiana until the land was purchased by the United States on April 30, 1803.

Napoleon always has been a particularly popular figure in Francophile New Orleans. The city was once considered a possible location for his second exile, but he died before moving there. Collectors eager to own a representative image of the Emperor find that examples frequently turn up at auction in the Crescent City.

Rachel Weathers at the Neal Auction Company on Magazine Street agrees that Napoleon’s portrait can complete an Empire interior: “If you are buying furniture in the Empire style, it makes sense to include Napoleon in your fine and decorative arts – he’s so recognizable. It’s the image that you want to put with that style. For example, you see a lot of portrait busts in gentlemen’s libraries and on parlor mantels.”

She continues, “He’s a romantic hero in a way; his image fits in with high-style classical interiors and completes the theme. Americans have ambiguous relationships with Europe, elitism, militarism, empire and democracy. Napoleon embodies all of these complexities in one handsome equestrian image.”

Weathers also emphasizes that there is no dearth of material, both objects made during his reign and those produced later in the 19th century as his legend grew. She notes, “French artists continued producing works with his visage well into the Romantic era and the reign of Napoleon III. Eugene Delacroix said it best, ‘The life of Napoleon is our country’s epic for all the arts.’”

Napoleon makes an appearance in almost every Neal sale in New Orleans. The upcoming auction on April 21-22 offers the opportunity to buy an oil portrait of the ruler in military uniform as well as a bronze-mounted porcelain roundel depicting the Emperor’s head in classical profile. In the aptly named Louisiana Purchase Auction last November, a fine large bronze of Napoleon on horseback sold for $20,315.

View the fully illustrated catalog for Neal’s April 21-22 auction and sign up to bid absentee or live via the Internet at www.LiveAuctioneers.com. 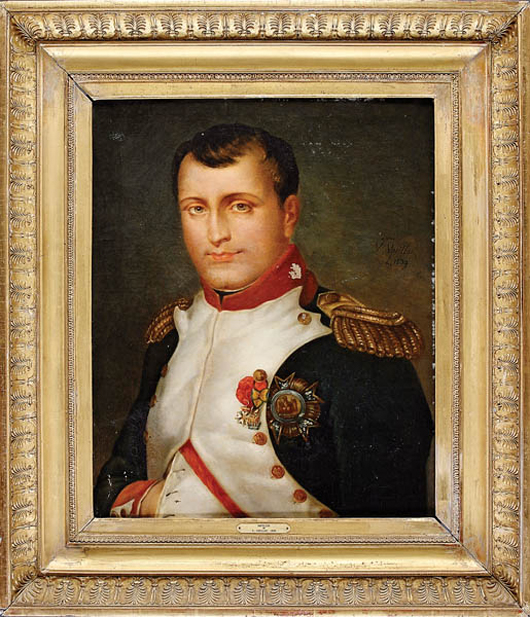 An 1839 oil on canvas portrait of Napoleon in uniform signed by V. Varillaz will be offered in New Orleans in the April 21-22 sale (estimate $4,000-6,000). Courtesy Neal Auction Company 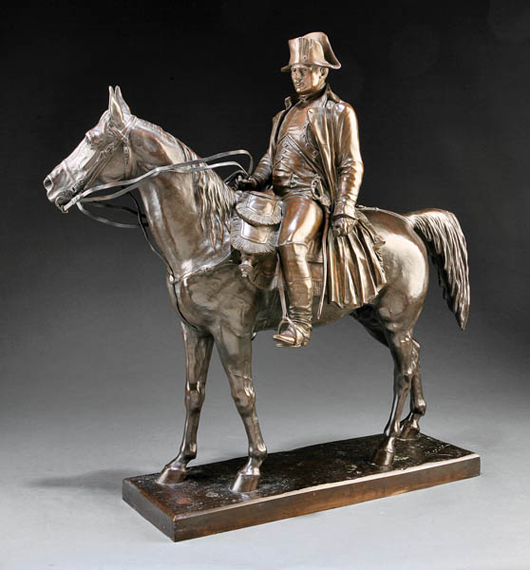 This large bronze statuette of Napoleon on horseback (H. 25 inches) sold at the Neal Auction Company last November for $20,315. The sculpture by Louis-Marie Morise (1818-1883) may have been a study for a monumental equestrian statue. Courtesy Neal Auction Company 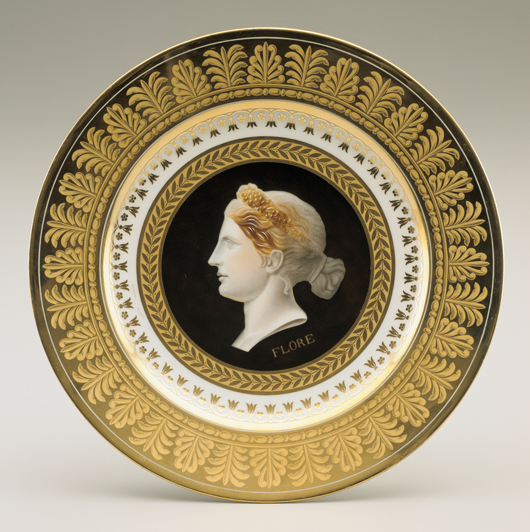 A Sevres plate with the classical goddess Flore, 1813-1814, is among the treasures on display in The Style that Ruled the Empires: Russia, Napoleon, and 1812 at the Hillwood Museum through June 2, 2012. Courtesy Hillwood Estate, Museum & Gardens 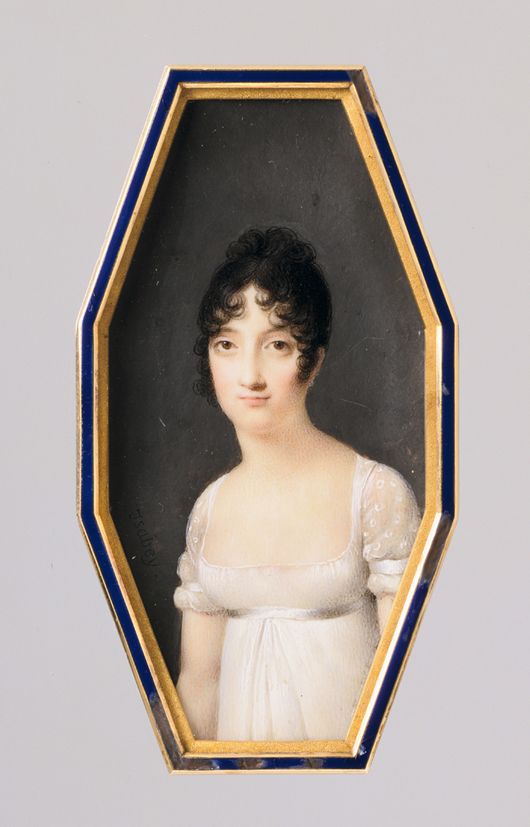 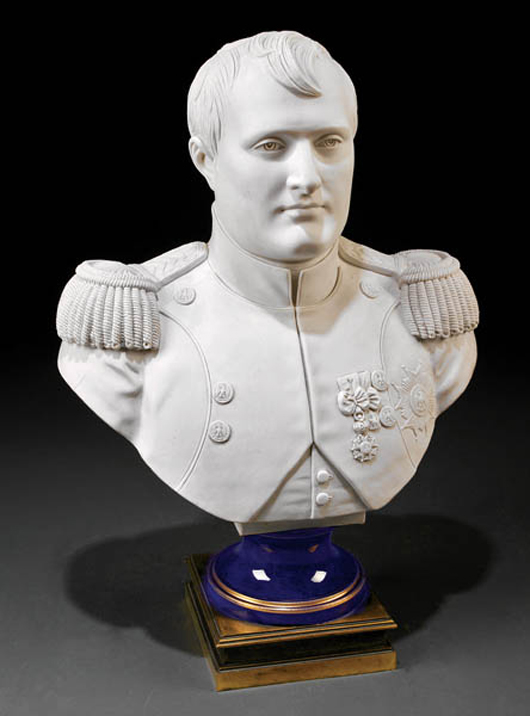 Perfect for a mantel or library setting, this French biscuit porcelain bust of Napoleon, after Jean–Antoine Houdon, sold at Neal’s in February for $5,378.Courtesy Neal Auction Company 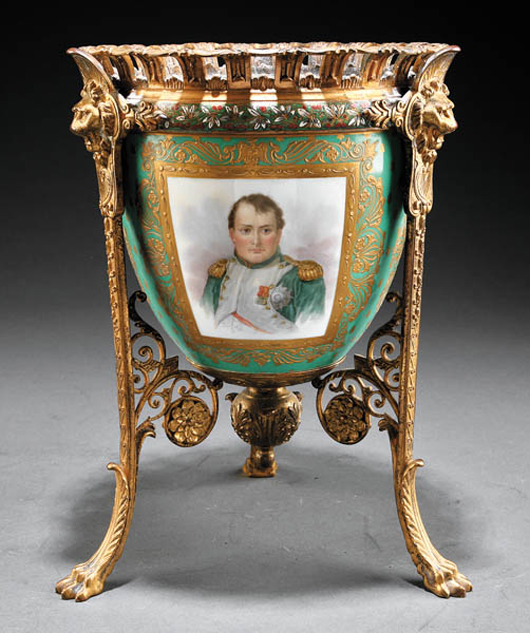 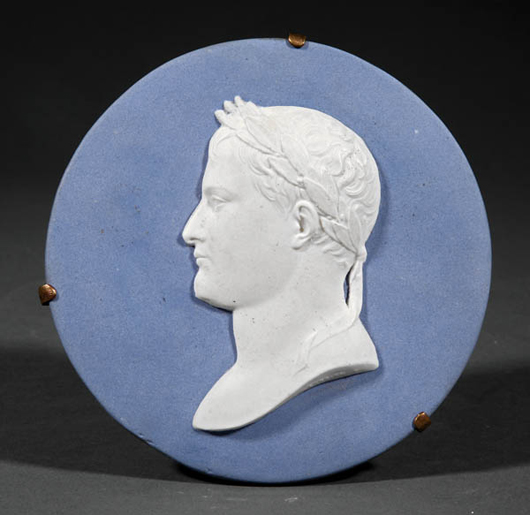