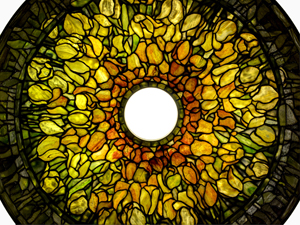 NEW YORK – Today’s collectors can draw inspiration from tales about legendary figures of the past, who assembled glorious collections with enthusiasm and aesthetic discrimination. Anyone interested in antique glass will be interested in the story of New York City collectors Egon and Hildegarde Neustadt who formed one of the most comprehensive collections of Tiffany lamps ever gathered.

Lindsy R. Parrott is the Director and Curator of the Neustadt Collection of Tiffany Glass, which includes lamps, stained glass windows, and a study collection of over 275,000 unused pieces of glass, which remained when the famous studio closed in 1937. The collection’s history, images of highlights, and catalogue ordering information can be found at www.neustadtcollection.org.

The Neustadts originally formed the collection when the “getting” truly was good. Parrott explains, “Dr. Neustadt was absolutely a visionary. He started collecting these in 1935, only two years after Louis Comfort Tiffany (1848-1933) had died. He and his wife were living in Queens. They had come from Austria and were very proud to be Americans. They liked Tiffany glass because it was an American art form.”

Hildegarde Neustadt spied their first example, – one of the daffodil-shaded lamps in the collection – at a second hand shop. At that time in the mid-1930s, Tiffany in particular and Art Nouveau in general were out of style. Ordinary people decorated their homes in the truly forgettable Colonial Revival style, while the more adventurous were experimenting with Art Deco and its successors.

Mrs. Neustadt only had money for the table they needed that day, but several weeks later she returned and purchased the daffodil lamp for $12.50. In Dr. Neustadt’s reminiscences, he recalled that their friends did not think much of the acquisition. The couple persisted in their passion, and the 21st century market for Tiffany lamps, which has seen examples soar past the million dollar mark has proved that the Neustadts’ taste in decorative arts was just about perfect.

In The Lost Treasures of Louis Comfort Tiffany, Hugh F McKean writes about Tiffany’s interest in lighting: “He was fascinated with light and with all kinds of illumination. He loved color for itself. He loved glass for itself. Lamps were one art form that offered an opportunity to satisfy all three interests. He took them very seriously.”

The Neustadt Collection is unusual in that it does not have a permanent home but organizes travelling exhibitions to tour its treasures around the country. At present, The Brilliance of Tiffany: Lamps from the Neustadt Collection, on view at the Memphis Brooks Museum of Art through January 13, 2013, presents more than 40 examples of lighting as well as a display of glass fragments used to assemble the shades. A smaller exhibition, Tiffany Glass: Painting with Color and Light begins traveling next year.

The organization also enjoys an ongoing affiliation with the Queens Museum in the borough of New York where the Neustadts lived. A dedicated gallery is showing An Orchestra of Color: Flat Glass of Louis C. Tiffany with eleven lamps, two windows, and more than 200 pieces of flat glass from the Neustadt holdings. Parrott also co-curated and loaned objects for the exhibition Louis C. Tiffany and the Art of Devotion at the Museum of Biblical Art in New York through January 20, 2013.

Parrott says, “We are very excited about this next chapter of our partnership with the Queens Museum of Art, a partnership we have maintained since 1995. We will have a new gallery when the expanded museum opens in the fall of 2013. The gallery will present small changing exhibitions drawn from our permanent collection. These shows will dig deeper into a particular aspect of Tiffany’s lamps, glass, windows, etc. We will also feature permanent installations dedicated to telling the story of Dr. and Mrs. Neustadt’s collection and Tiffany’s presence in Queens – the original site of the workshop was less than two miles from the Queens Museum.”

Surrounded by the glowing lamps, the Director emphasizes the depth of the superb collection: “I really view this as a teaching collection. We have multiples. For example, we have two identical peony shades. We have three grape hanging shades, all of which are identical but the color palette is incredibly different. Viewers can see how glass selection affects the overall success of the lampshade. These grape lamps have the same model numbers, but the one on the left is much more complex.”

She continues, “All three of these lamps have pond lilies as their subjects, but the lilies are different species. The artists are carefully studying botanic samples and going out into the field. Yes, we have a lot of lamps, but it’s such an important selection.”

In 1983, the year before he died, Dr. Egon Neustadt presented a major gift of lamps to the New-York Historical Society. While some are on display at the Manhattan museum, the complete group can be viewed online under “Special Collections” at www.nyhistory.org.

Tiffany created lighting in a variety of shapes and sizes from simple standard desk lamps to custom orders for chandeliers. At the time they were made, the choice of shade, base, and detailing affected the price, but they were definitely a luxury item. Purchasing a fine table lamp for $400 in 1906 would have been impossibile for a average family when their income might only be $500 a year.

Today’s prices vary as well. Five- or six-figure prices are common for rarer shade subjects. But dedicated collectors who watch auction offerings can find affordable opportunities to bring a Tiffany lamp into their own collections. 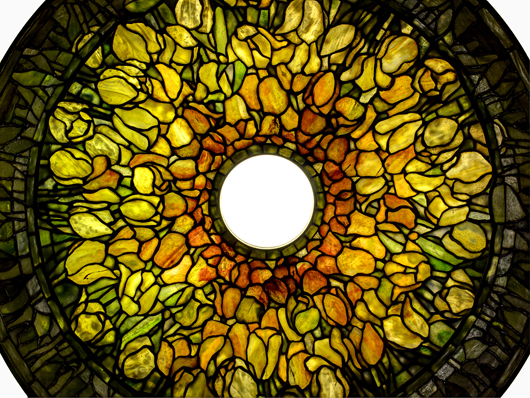 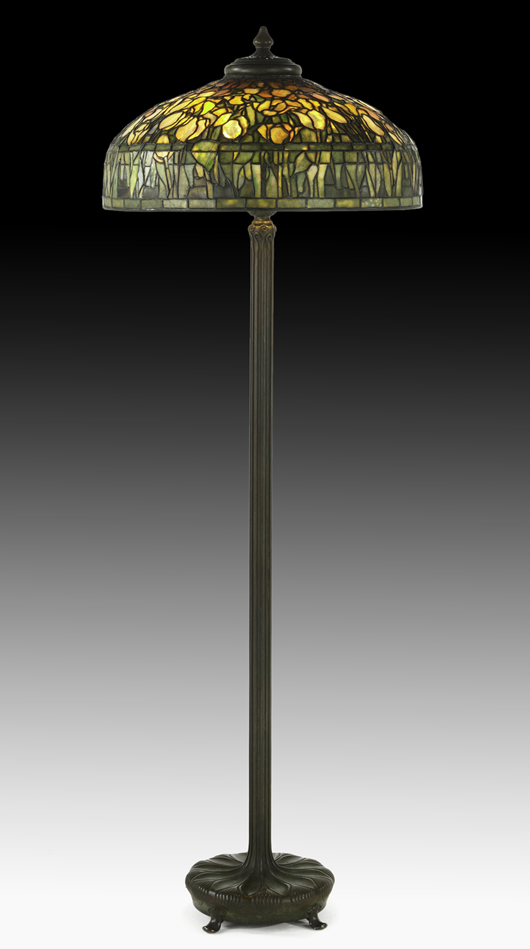 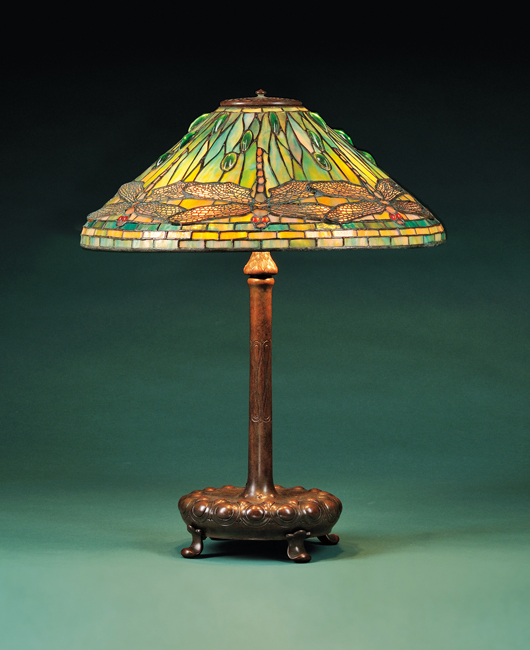 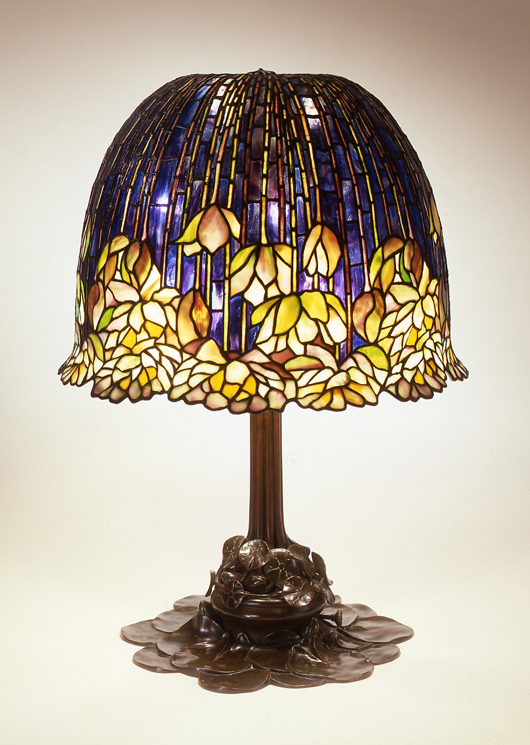 The Neustadt Collection of Tiffany Glass organizes touring exhibitions which dazzle viewers and offer collectors in-depth information about how the beautiful lamps were constructed. A tour-de-force creation on display in the current show, this pond lily library lamp juxtaposes a cascading glass shade above a base of supporting lily pads. Courtesy Neustadt Collection of Tiffany Glass 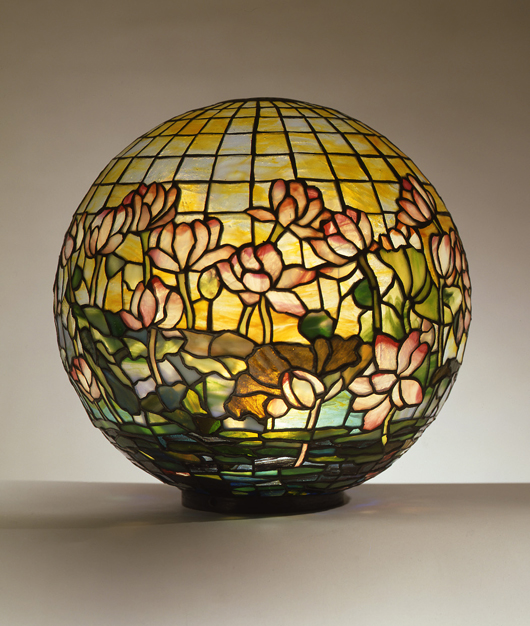 Tiffany glass, both lighting and windows, was often destined for a special setting in a sumptuous interior. This rare Neustadt Collection globe shade with lilies rising from water once graced the newel post of a grand staircase. Courtesy Neustadt Collection of Tiffany Glass 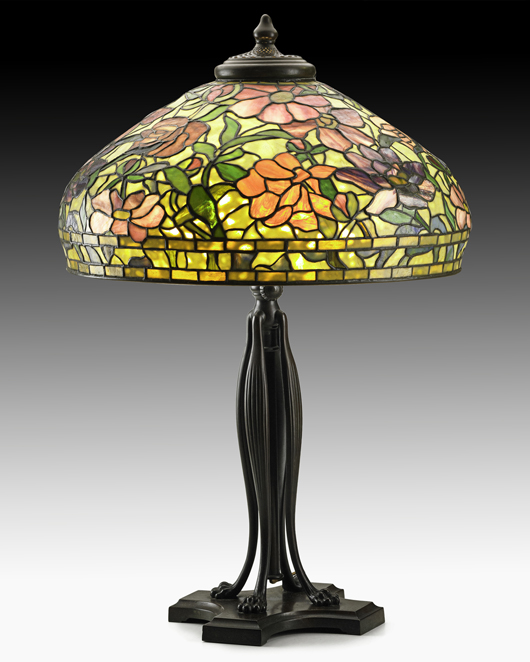 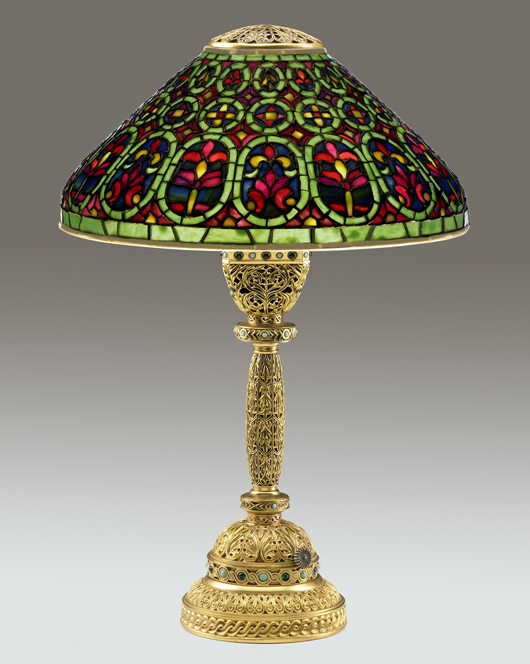 A more-ornate table lamp featuring a jeweled Venetian shade and elaborate base more than doubled its estimate to bring $81,000 at Rago’s in 2009. Courtesy Rago Auctions 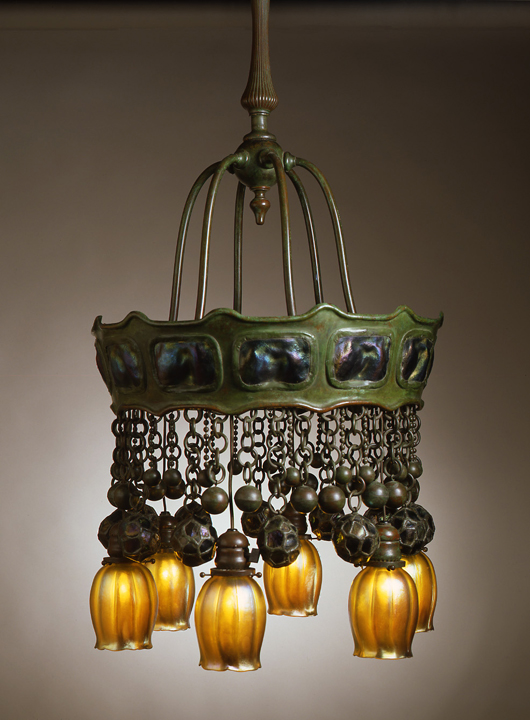 All facets of Tiffany going on display at Winterthur