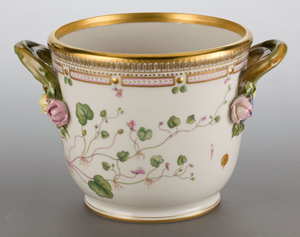 WINTERTHUR, Del. – Winterthur’s new exhibition, Uncorked! Wine, Objects & Tradition will have collectors lifting their glasses in a toast. The show comprehensively covers the influence of wine on history, religion, politics, and entertaining.

In a recent interview, Leslie Grigsby, Winterthur’s Senior Curator of Ceramics and Glass, revealed her inspiration for the long-running exhibition: “The subject has been something I’ve been in love with since I began in the field, down in Colonial Williamsburg. When you look at dishes and drinking vessels long enough and are in love with how they were used, this project grows naturally out of it.”

She continued, “The exhibition fills our two largest galleries, and it includes well over 300 objects – anything from small wine glasses and decanters to sideboards, books from the library, and objects for the garden.”

Uncorked! opened April 28 and will be on display through January 6, 2013. Collectors around the country also can access a “virtual exhibition” online at www.winterthur.org, which includes images of the objects and in depth discussion of the business and pleasure of wine drinking.

Grigsby explained, “We wondered a little bit about whether it made sense to put the virtual exhibition online at the same time that we’re opening the museum exhibition. But then we decided that it was so rich in different kinds of objects that people would look at it and go, wow – I need to go there and see it live.”

“We are not trying to teach them about how wine is made or how to tell the difference between the many wines available today,” the curator said. “We are hoping they will feel the sense of joy that often was associated with these objects. We have quotes from Charles Dickens and from Homer. We have drinking rhymes and a whole set of objects associated with drinking games as well as the more serious objects that show you the variety of elegant wares available.”

Among the many treasures, visitors will find a communion chalice made by Paul Revere, Jr., dated 1768; an English inlaid bottle case fitted with decanters and glasses; English silver wine labels for port and sherry, 1725-1775; and a Hogarth print of “A Midnight Modern Conversation,” circa 1733, which depicts a raucous group of gentlemen around a punchbowl.

On view in the drinking games section is a group of puzzle jugs. Drinkers had to pull from the correct opening and cover the others in order not to be splashed with wine. One English example is decorated with this rhyme in blue: “Here Gentlemen Come try yr Skill, [I’ll] hold a wager if you will, that you Don’t Drink this [liquor] all, without you Spill or lett some Fall.”

One favorite of Leslie Grigsby’s is “Settling the Affairs of the Nation, a late 18th century London print showing the inside of wine shop. She said, “This is in a section we have on the business of wine – selling wine and wine equipage – and the fact that wine helps sell other things. Typically in the 18th and 19th century, there are two different areas of wine sales – people who sell wine and the people who sell wine equipage. And the latter often sell dinnerware which makes sense.”

Viewers of the exhibition will become entranced by the collecting possibilities. Four years ago Heritage Auctions in Dallas established separate sales for fine silver, and antique wine coolers have become highly sought after for display and practical use on the table.

Tim Rigdon, Heritage’s Director of Silver, Vertu, Decorative Arts, and Design, explains the possibilities: “You have the ewers, the stands and coasters, the strainers, the labels – there is a huge variety of material. Just in silver. Often wine paraphernalia has Bacchic and grapevine motifs on the best examples.”

He continues, “Most often, a lot of that material does end up being used, and I strongly encourage collectors to actually use their pieces. In the April sale, there were six coolers in all, three different pairs, each a different size – all made by the same maker.”

“They had a wonderful combination of filigree silver and engraved glass that you get at the end of the Victorian and beginning of the Edwardian period. During the course of a dinner, you could have multiple vintages which require coolers of different sizes. The staff would not only serve at the dinners but also care for the polishing of the pieces.”

“We do two to three dedicated silver sales a year, and wine coolers do incredibly well,” he points out. “A year and a half ago, we also sold a collection of late Georgian and early Victorian English wine ewers and jugs which had been formed by an American who was a long time resident in Hong Kong. English residents in the army or in trade would have all the elegant accoutrements they would have enjoyed back home.”

To view past and future sales of silver at Heritage, visit www.LiveAuctioneers.com. 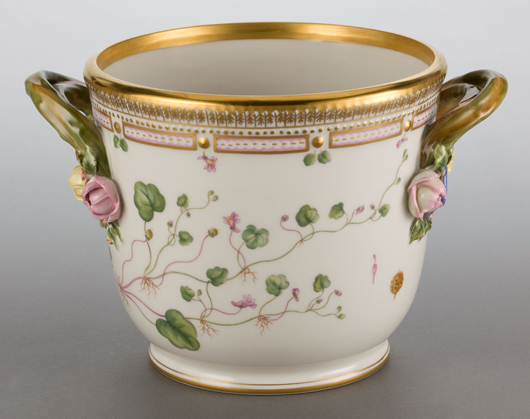 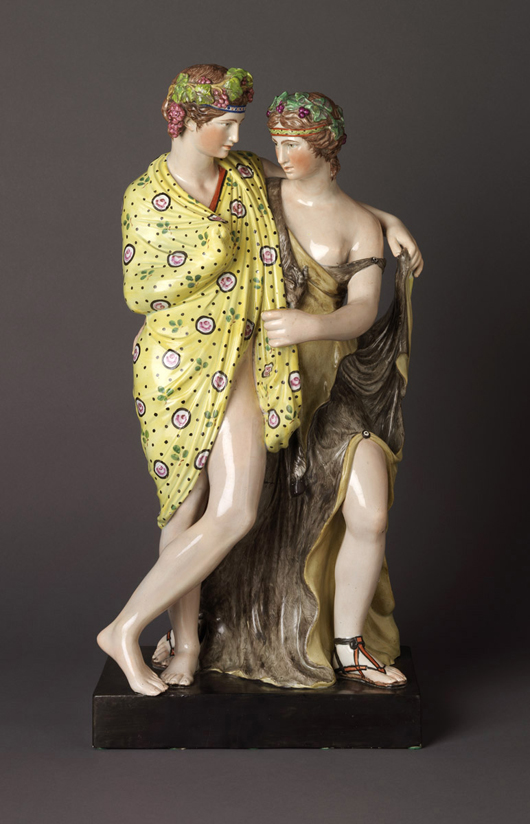 Uncorked! Wine, Objects & Tradition, a major exhibition at the Winterthur Museum in Delaware, explores the history, business, and politics of wine consumption. Among the artifacts on display is this English pearlware group of Bacchus, the god of wine, and his female consort Ariadne dating 1790-1810. Courtesy Winterthur Museum 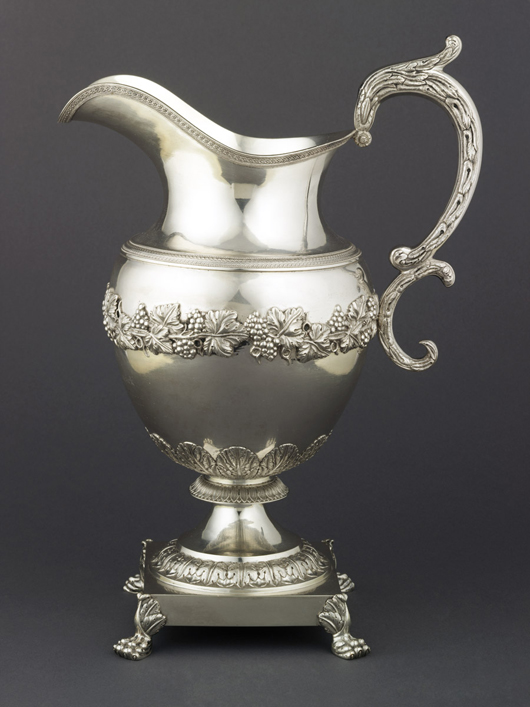 Clusters of grapes and grapevines often ornament wine equipage. On view at Winterthur, this silver presentation pitcher or wine ewer with a grapevine band was made in the workshop of Edward Lownes of Philadelphia and is dated 1827. Courtesy Winterthur Museum 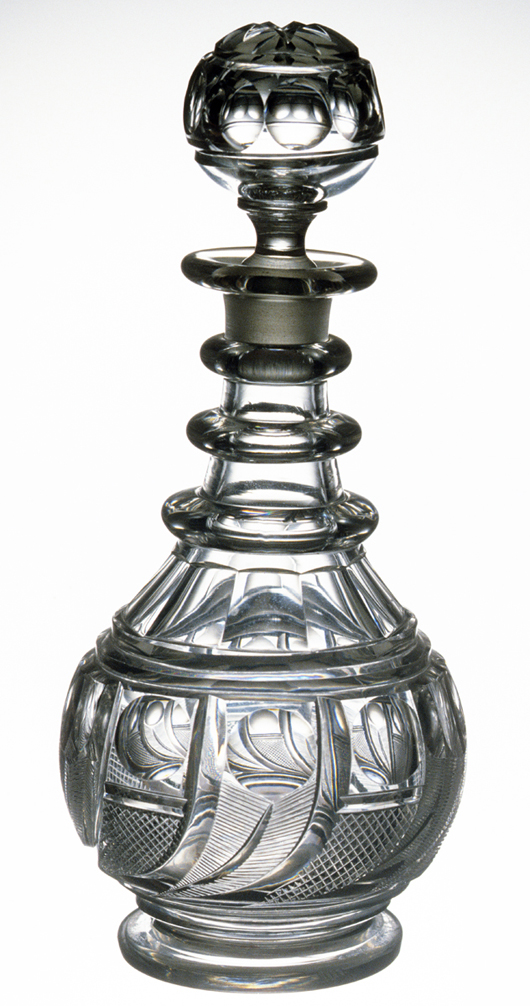 Glass was perfect for storing and serving wine. This American lead crystal decanter, 1825-1840, cut in the peacock eye or comet pattern, is one of several examples in Uncorked! Courtesy Winterthur Museum 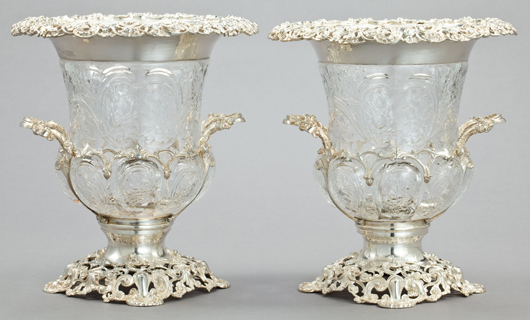 Wine coolers were often made in pairs and came in various sizes to use with different vintages. These wheel-cut crystal containers on a reticulated base by London maker William Comyns & Sons, 1903-1904, brought $8125 last month. Courtesy Heritage Auctions 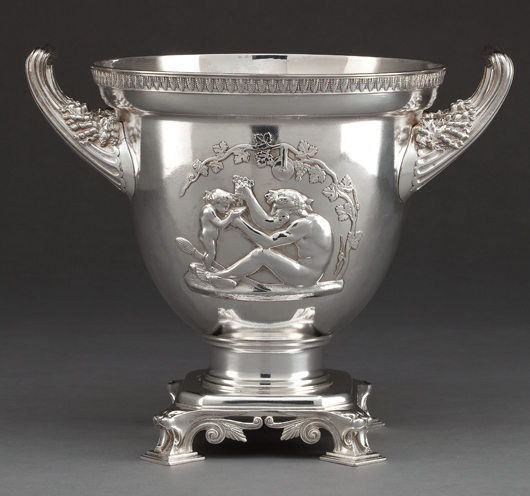 This Tiffany silver wine cooler, 1870-1875, makes its purpose clear: Bacchus serves drink to a putto on either side. The lot sold at in Heritage’s Silver & Vertu auction last September for $6572.50. Courtesy Heritage Auctions 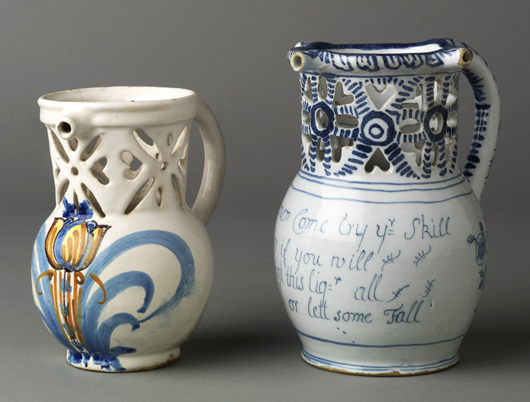 Puzzle jugs appear in the Drinking Games section of the exhibition – the one at left is Dutch, 1650-1670, the one at right is English from Liverpool, 1750-1770. Users had to cover the correct holes with their fingers or wine would splash on the face and clothes. Courtesy Winterthur Museum