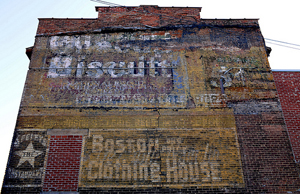 Several advertisements have survived on this building in downtown Schenectady, N.Y. You can see a Uneeda Biscuit ad at the top; the Boston One Price Clothing House at the bottom, and Seeley’s ‘The Star’ Restaurant, an 1890’s eatery, at far left. Photo by Chuck Miller.

ALBANY, N.Y. (ACNI) – They blend into the background, touting products like Pillsbury Flour and Bond Clothing for Men. They exist in big metropolitan areas and in small-town America, with such painted and fading mantras as “Chew Mail Pouch Tobacco” or “Uneeda Biscuit, the Perfect Soda Cracker.” And while the products they pitch may have long vanished from popular consumption, their original advertisements remain visible – almost – on the façades and sides of buildings and barns. To collectors and aficionados, they’re known as “ghost signs.”

I discovered several of these ghost signs on buildings in the Albany-Schenectady-Troy area of upstate New York. Many of these signs have paled to the level of near illegibility; others were painted over so many times, that with decades of elemental and environmental wear and tear, they’ve actually created multiple exposures, as one vintage ad competes with another for space on a plein-air canvas.

One of the most famous sets of ghost signs reflects the National Biscuit Company’s Uneeda Biscuit advertising campaign. While soda crackers were previously purchased in big barrels, where the customer filled up a bag with as many unbroken crackers as they could find, the National Biscuit Company advertised their line of “Uneeda Biscuits” – soda crackers wrapped in special protective pouches – with a million-dollar advertising campaign. Thousands of buildings were painted with “Uneeda Biscuit – The Perfect Soda Cracker.” The campaign was so successful, the signs were repainted over and over again, and today those signs are still visible, even though Uneeda Biscuits ceased production in 2007.

Another famous campaign was for Mail Pouch Tobacco. In exchange for a few dollars a year each, thousands of farmers agreed to have the words “CHEW Mail Pouch Tobacco” painted onto their barns. Nowadays, to have a Mail Pouch Tobacco barn is a status symbol in itself, and many of these barns have been restored, advertising intact, to achieve the status of historical sites. Mail Pouch also painted several brick city buildings in areas where barns were not found. Those ads have survived to this day as well.

Painted brick-face ads eventually were replaced by billboards, whose messages could be updated or replaced as quickly as a construction crew could roll out a new banner. Brick-face ads, on the other hand, had to be fully repainted by hand in order to stay presentable. Amazingly, these brick-face ghost signs often survive because the only way to really remove them is to either paint over them or knock the building down, removing the ad once and for all.

There are several tricks to capturing ghost signs on film. Because many of these ads have faded almost to nothingness, photographing these signs is best done after a late-day rain shower, where the colors have a sharper contrast upon the brick face. Other advertisements are only visible on cloudy, overcast days when one can best capture the ghost sign without direct sunlight burning into the ad.

The best place to find ghost signs? Look up. The tallest, oldest buildings often retain ghost signs that were painted on their facades 100 years ago. In an age before the Internet and billboards, painting an ad on the tallest building ensured that more people would see it from different locations. Sometimes a ghost ad will emerge after years of obscurity. A ghost ad I recently discovered in Schenectady, N.Y., had been blocked by the construction of a newer structure. When that second building burned to the ground, the ghost ad on the first building became visible for the first time in a century.

Copyright 2010 Auction Central News International. All rights reserved. This material may not be published, broadcast, rewritten, or redistributed. 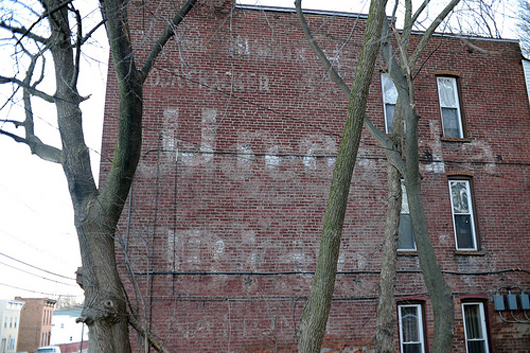 One of several surviving Uneeda Biscuit ‘ghost sign’ advertisements, this one is on an apartment complex at the corner of 4th and Polk Streets in Troy, N.Y. You can make out the words ‘The Perfect Soda Cracker’ in upper left, the early Nabisco logo in upper right, and the words ‘Uneeda Biscuit,’ along with ‘National Biscuit Company’ at the bottom. Photo by Chuck Miller. 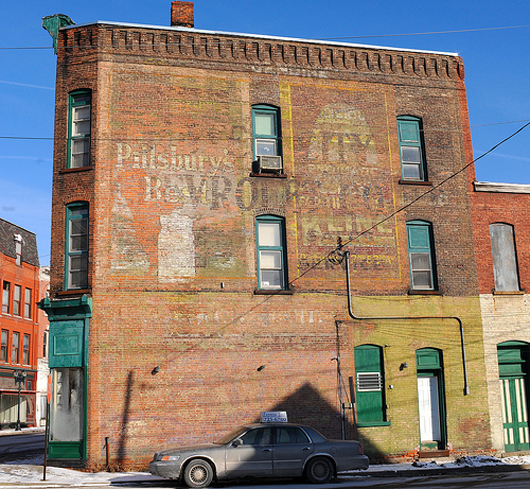 This wall in Gloversville, N.Y. has been repainted several times with brickface ads; the ghost signs that still survive reference everything from Pillsbury flower to the local Chevrolet car dealership. Photo by Chuck Miller. 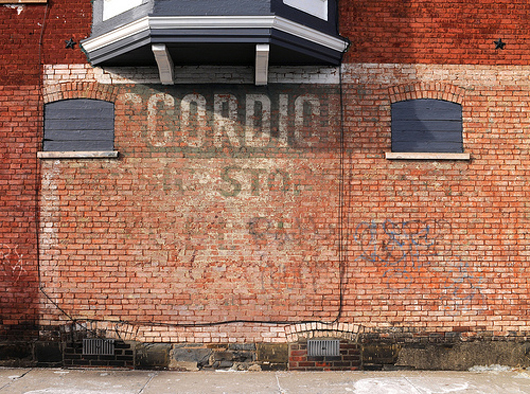 The only remaining identification that this was once a music store on the corner of State and Martin Streets in Schenectady, N.Y. is the remnants of the word ‘Accordions’ as a ghost sign. Photo by Chuck Miller. 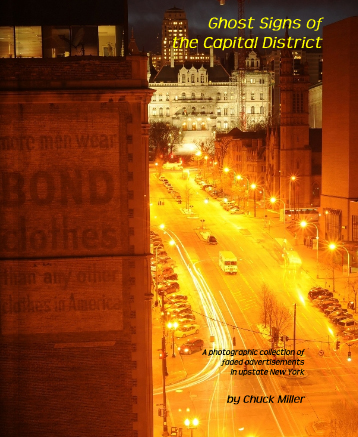 Neon art lights up the night