PHILADELPHIA – Before he got into the auction business, Jeff Kamal was a collector—who soon learned that auctions are an incomparable source of art, antiques and decorative objects.

“I started buying things at auction to furnish my house,” he recalled. “I realized that there were ways I could do a better job of it.”

At the time, Kamal had a successful career in pharmaceuticals. Friends were perplexed as to why he would give it up to launch an auction house.

“People look at auction houses the same way they do funeral homes,” he said. “They think you have to be born into the business and have it handed down to you.”

Kamelot grew rapidly by making the auction process easy for consignors and buyers. The house has a trusts and estates department, which provides top-notch support to banks, law firms, museums, corporations, and estate executors. Lots are staged in attractive room-like vignettes. Free appraisals are offered on most Wednesdays. Kamal, CEO and president, developed an international client pool through LiveAuctioneers.com, where prospective bidders can browse through digital catalogs, place bids and track sales.

To set himself apart from the pack, Kamal established a niche in architectural antiques, especially elements associated with the garden. That strategy quickly took root and blossomed through an annual sale in April, ideally positioned between the Chicago Garden Show and the New York Botanical show.

“It provides the top dealers with a great opportunity to replenish their inventory before the New York show,” Kamal noted.

The 2010 sale on April 24 got off to a cracking good start. The first lot, a Vincenza stone statue of a young man with bagpipes, resonated with bidders to the tune of $5,280, including 20-percent buyer’s premium. That’s five times the $1,000 low estimate.

A pair of Continental Neoclassical cast-led garden urns with ram’s-head handles, estimated at $3,000, fetched $13,800 with premium, taking honors as the top lot of the sale.

Along with such classics as urns and statuary, Kamal likes to offer the unexpected, as in the ancient fragment of a cypress tree consigned by an entrepreneurial Alabaman.

“She goes into swamps and drags out pieces of petrified wood,” he said.

The consignor’s sweat equity paid off, with the tree bringing $1,200, including premium.

Although the high end is strong, Kamal said many consignors are sitting on the sidelines, waiting for the economy to improve.

“The middle of the market is still very difficult,” he said. “A jardinière on a stand that would have brought $400-$600 several years ago will bring $200.”

Still, the cream rises to the top. At the April 2010 garden sale, a fine example of a bronze and iron circa-1910 Oscar Bach conservatory table with marble top brought a handsome $12,000, including premium. Kamal noted that several years ago a similar piece garnered $8,000.

Every auction tells a tale, and the account of Kamelot’s top lot to date is a genuine human-interest story. The coveted item on the block was a bronze-on-mahogany pedestal of a pensive seated scribe titled Nestor the Chronicler, by Russian sculptor Mark Matveevich Antokolsky (1843-1902). The bidder in the gallery was an elderly tailor, whose family had been acquainted with the artist.

“He had saved all his life for this one thing he could cherish,” Kamal recalled.

Bidding quickly zipped past the $20,000-$30,000 estimate, with the tailor and a dealer on the phone from New York competing in an electrifying duel.

“He was tearful—and the people in the audience had tears in their eyes, too,” he said. “Everyone in the room wanted him to win the piece, but it spiraled beyond his grasp.”

In September 2009, Kamelot hosted the aftermath of another drama, a high-profile, no-reserve sale sparked by the acrimonious divorce of billionaires Tim and Edra Blixseth. Bidders from 27 countries registered for the sale through LiveAuctioneers.

The Blixseths lived large, as evidenced by the antiques they collected to furnish the posh Yellowstone Club they built near Big Sky, Montana, including two 1875 sideboards from a French chateau, measuring 12 feet high and more than 13 feet wide.

Kamelot’s reputation as a resource for architectural elements has inspired a few unusual requests. When the Pennsylvania Lottery wanted to depict its mascot Gus the Groundhog as royalty, Kamelot got the call.

“They borrowed a bunch of big, important chairs that look like thrones,” Kamal said.

When patrons of the Philadelphia Art Museum are looking for help in transporting large sculptures and statues, curators frequently suggest asking Kamelot for advice.

“Having a reputation for being able to move heavy things isn’t always a blessing,” Kamal said. 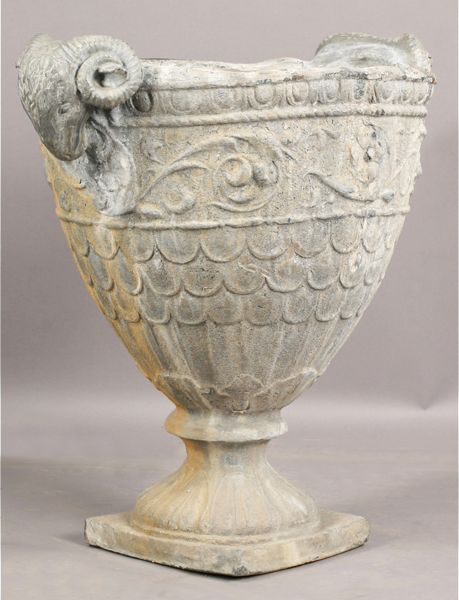 The top lot at the spring garden sale was a set of Continental Neoclassical cast-led garden urns with ram’s head handles. The pair was expected to fetch $3,000 but bidding sprouted to $13,800. Image courtesy Kamelot. 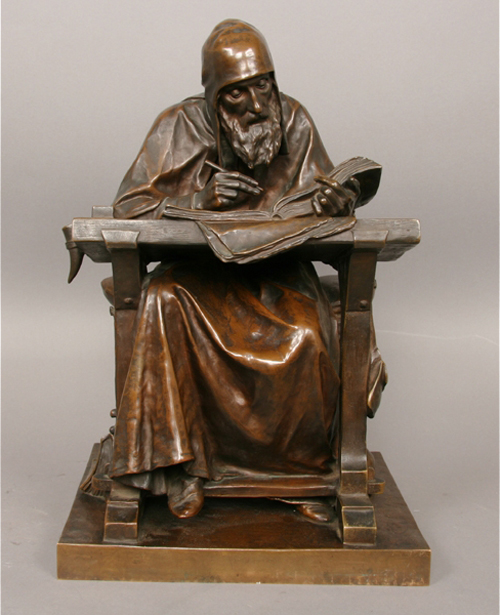 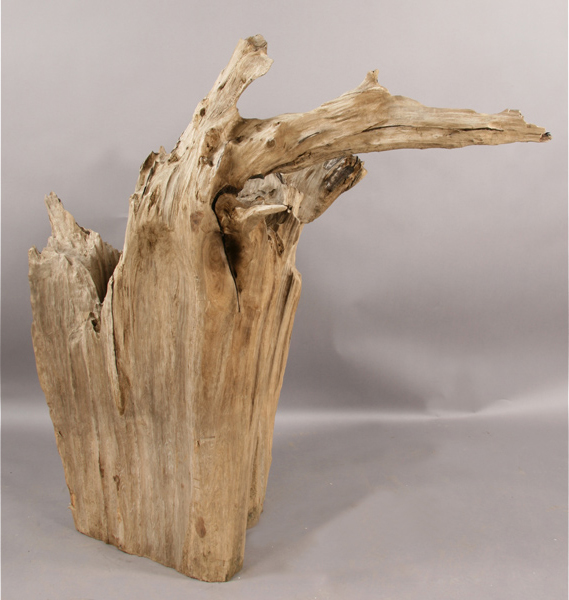 Mother Nature was the artist that created this petrified cypress tree, pulled from an Alabama swamp and sold for $1,200. Image courtesy Kamelot. 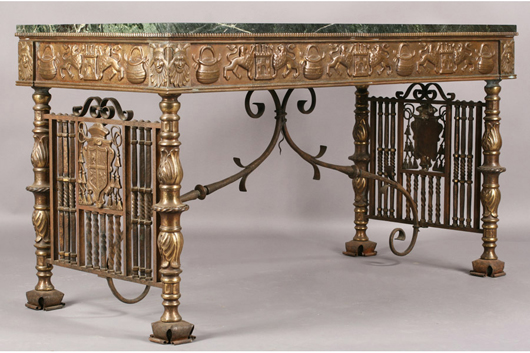 This Oscar Bach conservatory table is decorated with a frieze of lions and castles and supported by bronze legs with acanthus leaf detailing. It sold for $12,000, including premium, at the April 24 garden sale. Image courtesy Kamelot. 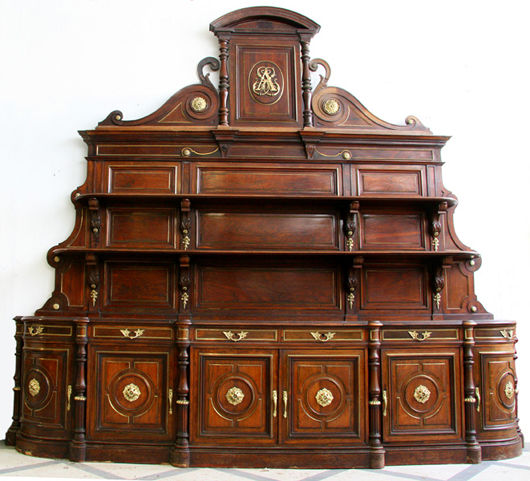 One of a pair of similar monumental rosewood sideboards, this circa-1875 French piece with central cast-iron rosette sold for $7,200, with 20-percent premium, when Kamelot auctioned off the contents of an exclusive club following a billionaire breakup. Image courtesy Kamelot.

Modern paintings, sculpture on deck at Leslie Hindman’s May 16 sale
Scroll to top