Signed Jean Knaeps, Liege (Belgium), this carillon clock with 24 bells has been rehoused in an 11-foot-tall Victorian oak case. Once owned by a clock museum, it sold at Tom Harris Auctions for $45,200. Image courtesy of Tom Harris Auctions.

NEW YORK (ACNI) – Any way you slice it, time is money. The adage certainly holds true for buyers and sellers of antique clocks, especially those who bid online at auctions through LiveAuctioneers.

Auctioneers are finding that collectors looking for higher-grade and scarce models are “winding up” at their sales online though LiveAuctioneers.

“It’s the convenience factor. A person can save time and expenses by staying at home and bidding through LiveAuctioneers,” said Tom Harris of Tom Harris Auctions, Marshalltown, Iowa.

“It you’re the winning bidder you have the expense of shipping, but it costs you nothing to try,” said Harris, who conducts antique and collectible clock auctions twice a year.”

Buyers save both time and money by searching for valuable clocks being offered at auctions.

Soulis believes potential buyers can accurately determine a clock is worth pursuing by examining its listing on LiveAuctioneers.

“You have the ability to post up to 10 images of an item, which can even give some indication of the movement,” he said, referring to the clock mechanism.

“The movement scares a lot of people. They want to see close-ups of the movement – very detailed,” said Jerry Holley, executive vice president and auctioneer at Dallas Auction Gallery. “They want to know if the movement is original to the case.”

Holley said that clock prices in general have slipped in recent years. “A lot of the American-made clocks are fairly common. Prices for the unusual, those in exceptional condition or by a rare maker draw the big buyers,” he said.

Kathleen M. Pica, auctioneer and owner of Auctions Neapolitan in Naples, Fla., said that clocks appeal to two distinct groups of buyers – collectors and individuals who are looking for a clock for decoration.

“For either group it helps to have fabulous-looking shots,” she said.

“Brand is very important. J.C. Brown clocks are very desirable for their cases, but collectors want the original works too,” she said, referring to the 19th-century Connecticut clock maker.

What is the condition of the case?

Has the case been refinished?

If the clock is spring driven, in what condition are the springs?

Are parts broken or missing?

Have decorative elements been repainted?

“Surprisingly the question they don’t often ask is, ‘Does it run?’” said Gordon Converse of Wayne Pa., an auctioneer who has appraised antique clocks on PBS Television’s Antiques Roadshow for 10 years. Many collectors don’t often ask the seemingly obvious question about working order because they often have the ability to get a clock running with a thorough cleaning and oiling.

“They often want to know arcane details like the shape of the weights … to confirm their knowledge of what’s original,” said Converse.

Because clocks were in constant use, they are seldom found in perfect condition – finials get lost, glass breaks and parts stop moving. Collectors are not very forgiving, however, when it comes to condition.

“They measure the amount of restoration and it sells accordingly,” said Converse.

Soulis concurred, saying, “Most clocks have turned over a time or two since being in the hands of the original owner. A lot of people like to work on clocks and not all of them are qualified. Collectors want them fresh. … A repainted dial is the kiss of death.”

Pristine, original condition is the ultimate goal for clock collectors.

“If the cataloging, condition reports and photographs are done right, collectors are pretty comfortable bidding online through LiveAuctioneers,” Cheney said.

Watch for clock sales at these auction houses who us LiveAuctioneers’ Internet live-bidding services:

Copyright 2010 Auction Central News International. All rights reserved. This material may not be published, broadcast, rewritten, or redistributed. 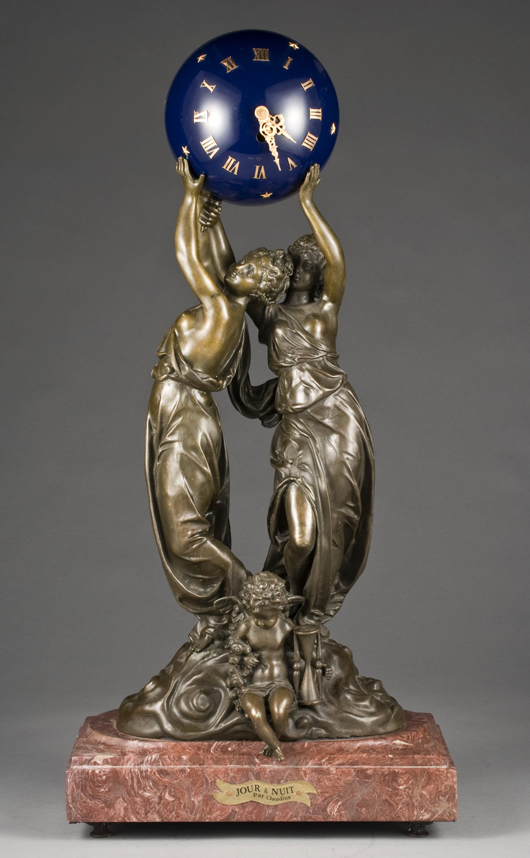 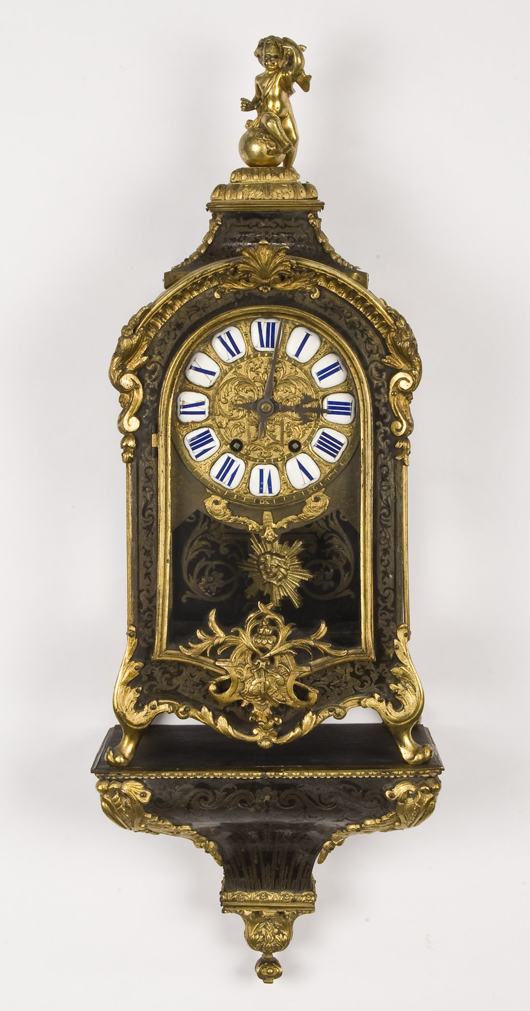 Dating to the second half of the 19th century, this French boulle cased bracket clock in an ormolu mounted case stands atop its matching wall bracket. The clock, which has a two- train brass movement striking on a wire gong, sold for $1,900 in September. Image courtesy of Dallas Auction Gallery. 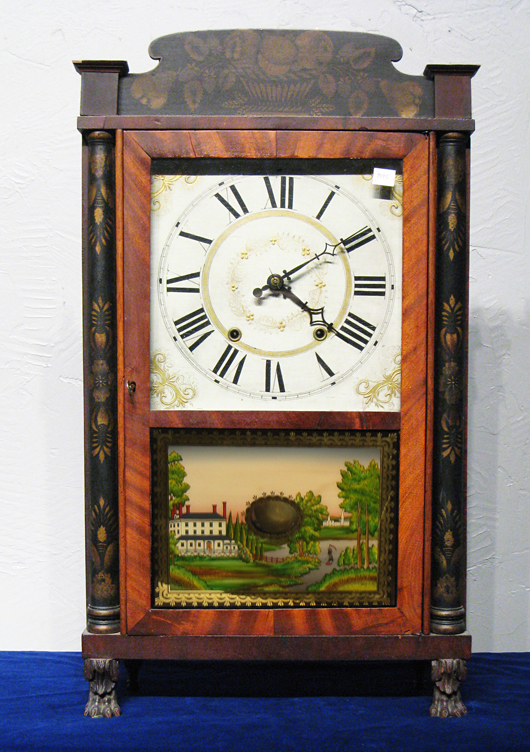 The original stencil decoration and reverse-painted glass remain intact on this circa-1830 American shelf clock. With carved paw feet and a wooden geared mechanism, it sold recently at auction for $574. Image courtesy of Gordon S. Converse & Co. 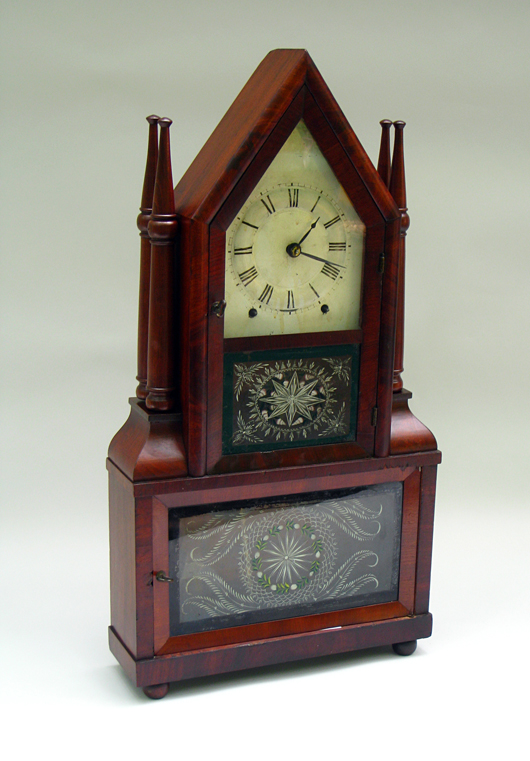 The reverse-painted glasses are original to this rare candlestick shelf clock, which has an ingenious ‘wagon-spring’ mechanism. It sold for $1,840. Image courtesy of Gordon S. Converse & Co. 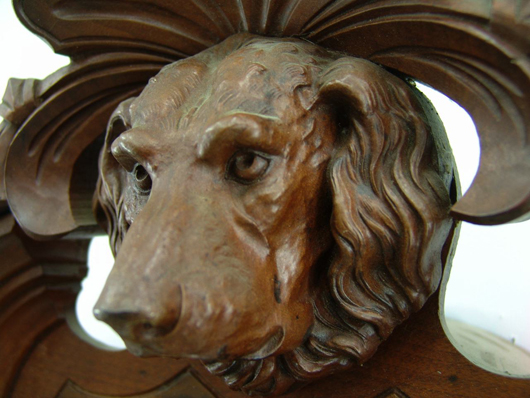 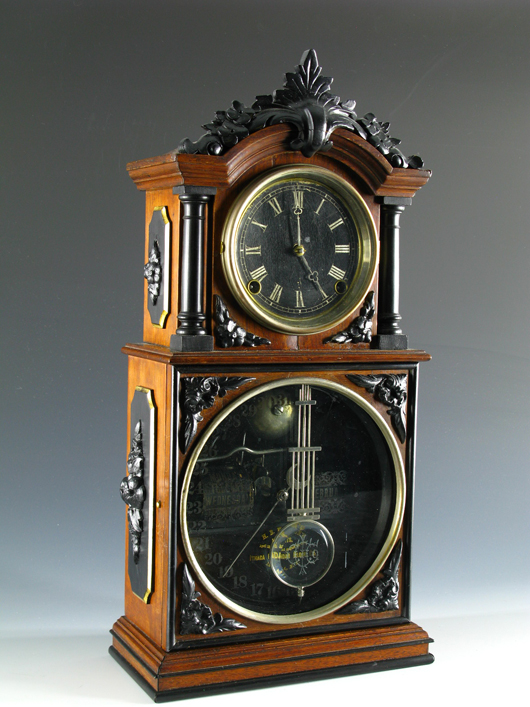 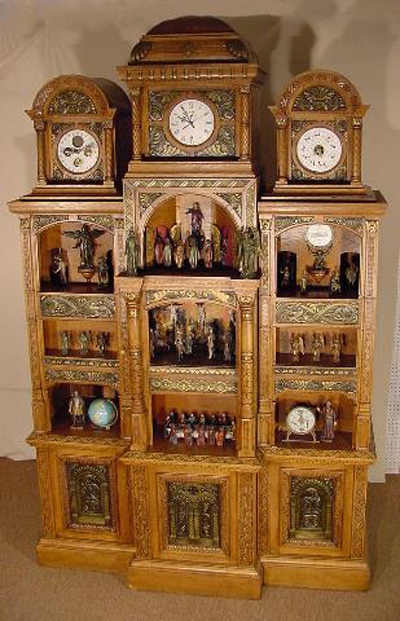