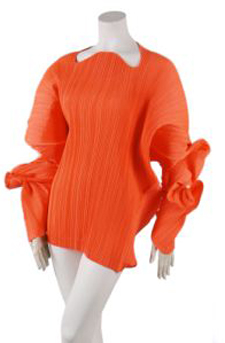 An Issey Miyake orange pleated minidress, sewn using only one seam, sold for $2,196 at Leslie Hindman’s April 19, 2009 auction of vintage couture and accessories, against a pre-sale estimate of $700-$900. Image courtesy of Leslie Hindman Auctioneers.

It’s been awhile since I caught up on the vintage fashion auction market. It’s easily my favorite auction category, because almost every human being “collects” and wears clothing of some kind. Increasingly, whether purchased for a few dollars at a thrift store or for many thousands at auction, vintage fashion is becoming a wardrobe staple for all kinds of people. I think it enlivens us, makes us look more interesting. Surely it saves wear and tear on the earth’s resources.

When Wal-Mart starts having vintage clothing manufactured somehow, please let me know, and I will just throw in the (interesting, vintage) towel once and for all. Meanwhile, I have gathered notes on some upcoming auctions, followed by market insights by Millea Bros. auction house co-owner Michael Millea, Leslie Hindman Auctioneers’ couture specialist Abigail Rutherford, and renowned Los Angeles dealer Doris Raymond.

New Jersey-based Millea Bros. made their presence well and truly known in the fashion arena with a Nov. 21, 2009 auction featuring the personal collection of the late Lucia Moreira-Salles, a Brazilian-born philanthropist and top model on the Paris catwalks during the 1960s. Moreira-Salles – muse to the great couturiers Chanel and Valentino – owned a breathtaking wardrobe of designer fashion. A feeding frenzy ensued once the news surfaced that her clothing and accessories were to be auctioned.

Michael Millea, who operates Millea Bros. together with his sibling, Mark Millea, remarked after the opening session that buyers had shown strong interest in Chanel and Hermes accessories, such as handbags and belts. He admitted to being surprised by the results.

“In particular, I had no idea the Chanel sweaters would do so well. Some were bringing $2,000. I almost didn’t take the sweaters; now I’m glad I did,” he said.

Millea called the auction “a shopping paradise” for many buyers. Commenting on an Hermes handbag that sold over the phone for $18,000, Millea predicted with a smile, “I think some of these things are going to end up in Christmas stockings.”

A few years ago, Doyle New York was a leader in this field, with its regular auctions of couture and textiles. Now, according to Doyle PR head Louis L. Webre, with so many other sources of vintage available to buyers and sellers, this full-service Manhattan auction house presents only large and important private collections when they become available, rather than assembling sales from various consignors.

Fashion historian and author Caroline Rennolds Milbank is Doyle’s consultant for their couture auctions and held a signing there of her new book Resort Fashion: Style in Sundrenched Climates. She noted that vintage jewelry at all levels is booming and that Doyle has added a new category between Costume and Important Jewelry, called simply Fine Jewelry.

Sotheby’s, whose vintage fashion sales were once the province of the visionary Tiffany Dubin, has teamed up with Kerry Taylor Auctions for a beautiful sale coming up Dec. 8 in London, including gowns from Audrey Hepburn’s wardrobe.

Christie’s London calendar, meanwhile, lists The Isabella Blow sale in March 2010. Isabella “Izzy” Blow was a beloved member of the fashion world, a vivid, singular personality who died in 2007 at the age of 47. Details of the sale’s contents are not yet available, but during her career as a Vogue fashion editor and muse-discoverer of milliner Philip Treacy and designer Alexander McQueen, among others, she accumulated a formidable personal collection.

Charles Whitaker offers a mixture of vintage clothing, textiles, and historical clothing and costumes at auction on April 9 and 10, 2010. The sale will feature property of The Historical Costume Museum, Inc, of Miami Florida.

For years, Leslie Hindman Auctions has been holding regular auctions of clothing and accessories at its Chicago galleries, often featuring beautiful collections from private estates. A notable recent example was the wardrobe of Catherine Tiffany Abbott, a cousin of Louis Comfort Tiffany, whose highlights included early-20th-century French couture gowns from which the designer labels had been removed, possibly to avoid customs duties. An unmarked green velvet evening gown believed to be a rare Vionnet design sold for $5,368, likely a fraction of its value had it been labeled.

I spoke with Abigail Rutherford, the talented specialist in charge of vintage couture at Hindman, about market trends. “First of all, we are seeing a lot of interest in very bold and sculptural pieces, especially dresses,” Rutherford said. “Styles that are emblematic of the 1980s are huge at the moment. Buyers love designers from that period like Alaia, Chanel, and Claude Montana, whose designs feature aggressive shoulders, neon colors, and meticulous tailoring…”

Art-inspired clothing and accessories from that decade are sought after as well, with Issey Miyake’s sculptural dresses and colorful, graphic pieces by Jean-Charles de Castelbajac, Moschino and Versace selling very well in the secondary market. The look Abigail is describing is reflected on contemporary runways. She sees “an obvious interface between these looks and new work by designers like Alexander McQueen, and Christophe Decarnin for Balmain.”

Another important trend, according to Rutherford, is the popularity of heavily embellished costume jewelry by makers like the Chanel jewelry designer Gripoix, and Iradj Moini. Big, sculptural metal pieces by Robert Lee Morris are in demand, as well.

Rutherford’s clientele comprises a spectrum of serious collectors and museums – who would frown on seeing valuable archival garments worn as fashion statements – and women who simply love fashion and stock their wardrobes with vintage clothing.

For images and prices from recent Hindman auctions, handpicked by Abigail for this article, see below.

With more than 30 years’ experience, vintage fashion specialist Doris Raymond has built a reputation as one of the most highly respected dealers in the field. Her Los Angeles shop calle “The Way We Wore” is perpetually haunted by stylists, costumers, movie stars, and the kind of teenage girl who raids her grandmother’s closet for Ossie Clark caftans. Doris has provided material for a number of films, including Walk the Line. Her private collection is legendary and her extensive by-appointment archives are used by top designers seeking inspiration.

Raymond shared her view on the current market for vintage fashion: “In the high-end range, it’s all about red carpet glamour,” she said. “In tumultuous financial times, celebrities and socialites are turning to vintage as an alternative to modern haute couture. Vintage examples of Dior, Chanel and YSL are just as desirable and [available] at more comfortable prices than their contemporary counterparts. Also sought-after are Alaia, Leger, Halston and Versace – from within Versace’s lifetime, that is.”

“Similarly, in the middle range, young girls are buying vintage dresses for proms and parties. Looks from the 1950s through1980s are being referenced right now.”

Raymond sees the influence of glamour looks from the 1930s through1950s in the collections of Prada and Marni, whom she says are both showing great 1940s dress looks. “John Galliano’s latest runway show reflects inspiration from the 1920s and 1930s,” Raymond said. “As you can see in any current fashion magazine, all fashion is derived from looks of the past.” She also mentions the contemporary practice among young designers of recycling and repurposing vintage pieces into new designs.

Asked to name a few emblematic items, by decade, that are au courant among serious collectors, Raymond responded:

1960s “Rudi Gernreich! An amazing West Coast designer who is growing in collectibility and [whose designs are] still wearable today.”

1990s “Still up for grabs, but anything lifetime Versace, Romeo Gigli, Thierry Mugler is likely to stand the test of time.”

Doris also mentioned Gripoix’s poured-glass jewelry and “anything else by Chanel – a camellia, a quilted bag…” as being strong sellers now.

Given her extensive long experience, Doris is better positioned than most to predict what the It-Bag set will be clamoring for next: “Softer silhouettes, a la Gigli and Sybilla; and minimalism in both silhouette and surface treatment will continue to be a strong direction. If the economy continues to slow down, grunge will be baaaaack.”

Catherine Saunders-Watson contributed to this report. 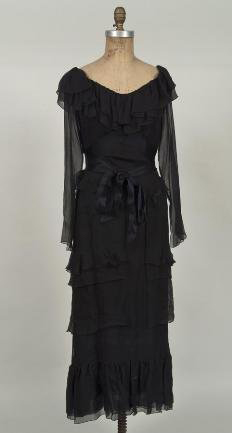 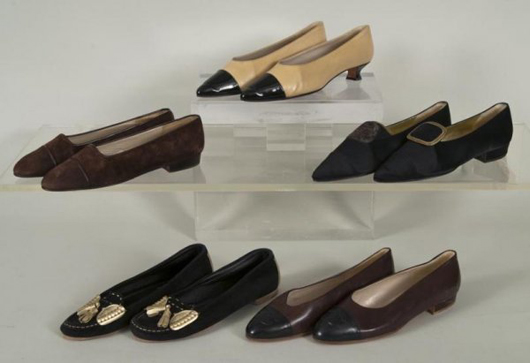 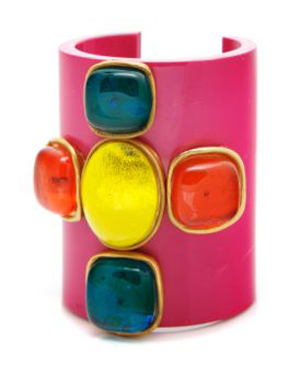 A Chanel pink Lucite and stone cuff bracelet with a poured-glass Maltese cross sold for $1,586 at Leslie Hindman’s Sept. 2, 2009 auction of vintage couture and accessories, against a presale estimate of $700-$900. Image courtesy of Leslie Hindman Auctioneers.

A stamped Iradj Moini gem set crawfish pin, 1983, with lavender, navy and clear poured glass in a gold-tone setting sold for $976 at Leslie Hindman’s Sept. 2, 2009 auction of vintage couture and accessories, against a presale estimate of $800-1,200. Image courtesy of Leslie Hindman Auctioneers. 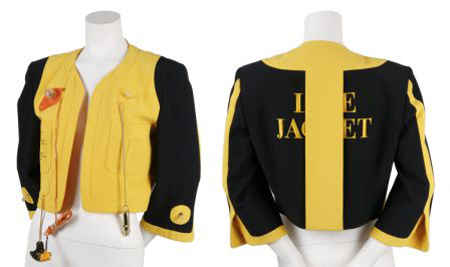 A 1989 Moschino “Lifejacket” from the 1989 Cruise Me Baby collection, labeled Moschino Couture, sold for $1,220 at Leslie Hindman’s April 19, 2009 auction of vintage couture and accessories, against a presale estimate of $1,000-$1,500. Image courtesy of Leslie Hindman Auctioneers.

A sleeveless Moschino Mondrian dress with a round neckline embellished at the front with the phrase “Art is Love,” labeled “Cheap and Chic by Moschino,” sold for $1,342 at Leslie Hindman’s Sept. 2, 2009 auction of vintage couture and accessories, against a presale estimate of $300-$500. Image courtesy of Leslie Hindman Auctioneers. 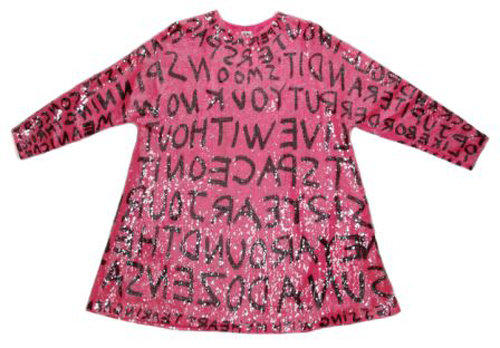 A Stephen Sprouse hot pink sequined graffiti swing dress, early 1984, from one of his first graffiti-inspired collections, labeled “SS84,” sold for $2,074 at Leslie Hindman’s Sept. 2, 2009 auction of vintage couture and accessories, against a presale estimate of $1,000-$2,000. Image courtesy of Leslie Hindman Auctioneers.