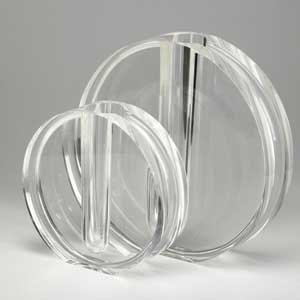 NEW YORK (AP) – Her friends’ Lucite-and-white kitchens were far more inviting than the outdated, psychedelic wallpaper and avocado-colored appliances that greeted Jeannine Anckaitis at home during the late ’80s.

“It was the absence of color that looked so clean, fresh and bright,” she said. “They were clutter-free and seemed upscale. Our kitchen, on the other hand, seemed garish and was overwhelming to the eye.”

It’s been more than 75 years since rival chemical companies came up with a new generation of clear acrylics known in their world as polymethyl methacrylate. Lucite wasn’t the first brand in 1936, but it’s an enduring symbol of mid-century modern style spanning home furnishings and decor, industrial design and retail merchandising, contemporary art and costume jewelry.

“It’s so modern, but it also looks futuristic at the same time,” said Alexis Bittar. “It’s definitely the platinum of the acrylics.”

Bittar is the wizard of Lucite after a 20-year journey from hawking his jewelry on the streets of New York to hand-sculpting masks for Lady Gaga and floral pins for Michelle Obama. “You can manipulate it any way you want,” he said.

Lucite’s qualities – it’s easy to form, glue, cut, tint and fuse with other materials to add texture, color and sparkle – are the things that made it a hit. Lucite handbags from Charles Kahn and other designers in the ’50s now fetch up to $600 or more from collectors.

There were precursors when DuPont put tough, clear-as-glass Lucite on the market for the windshields and canopies of fighter jets, the eyes of submarine telescopes and the gun turrets of tanks. Cheaper to produce than Bakelite, Galalith and Catalin, with a unique ability to conduct light, it moved over the years to a myriad of other applications, from three-story aquariums to the heels of women’s shoes.

“It’s definitely fresh,” said interior designer Benjamin Noriega-Ortiz, who created a sleek living-room set of clear Lucite for the New York City digs of Sean “Puffy” Combs. “I like that it’s clear, so the rooms tend to look larger when some of the pieces are in that material. I also combine it with white or black so it’s a combination of clear and solid. It’s easy to clean. You don’t have to paint it.”

Lucite has its purists. Some wouldn’t consider designing in color, for example, or embellishing it with metals and other bling. Perhaps all those neon Lucite laminate keychains produced by high schoolers during shop class in the ’70s left a bad taste.

Etienne Coffinier, an architect and furniture designer who grew up in Algeria, Holland and Dubai, works solely in clear Lucite.

“It’s a staple of our design,” he said. “We have clients who have huge rooms and therefore they have huge coffee tables. I don’t like to have the huge coffee table hiding the beautiful rug I have designed for them. The best quality of Lucite is that it’s more transparent than glass. It doesn’t scratch so easily, and if it does you can usually buff it out.”

Noriega-Ortiz straddles the divide, using pops of bright solids in chairs or yellow see-through tabletops in the same home as clear Lucite chandeliers, and shaped legs holding up other pieces.

Lucite is great, he said, for combining periods in home furnishings. “We mix it with antiques so it doesn’t compete.”

Ultimately sleek and modern, the designers said, the acrylic – in name and sensibility – has traveled far from the ’50s, considered its heyday, straight through to the ’70s, a period followed by several years of sagging interest revived by a new generation of designers.

“As a sculptor in addition to a designer, I was attracted to the endless possibilities of using Lucite to create new jewelry shapes – a loose-fitting bangle or cuff that wraps around the wrist, a solid Lucite ball on a long chain,” said Isaac Manevitz, creator of the Ben-Amun jewelry line.

“When I started my brand in the early ’80s, Lucite helped pave the way for outrageous fashion jewelry that was more fun than the smaller diamonds that had been so popular in previous decades,” he said.

In suburban Chicago, Wendy Piersall has the bug for vintage, inspired in part by a grandmother who passed down a tortoise-colored Lucite bag.

“My father’s mother was incredibly fashionable, with impeccable taste,” she said. “It’s really one of my favorite pieces of all time. You just can’t find stuff like that anymore.”

In the ’50s home, after the war and its rationing were over, all things “modern, fresh and clean” were appealing, and Lucite swept in, said Chris Robinson, business manager for Lucite International, a Memphis, Tenn.-based division of Mitsubishi Chemicals.

“It was cool to have clear Lucite cutlery. It was in everything,” he said. “Back then it was expensive stuff and arty stuff, so the fancy people were getting it. They were looking for things that weren’t metal, like the things their parents had. Lucite was a material that no one had seen before.” 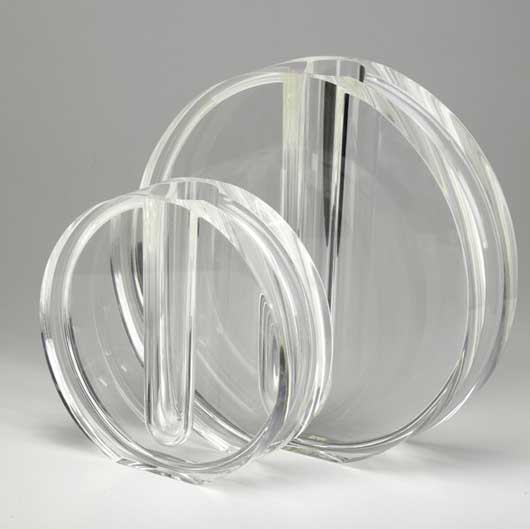 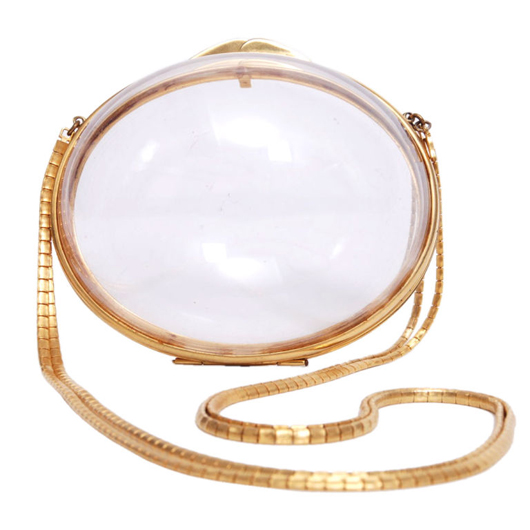