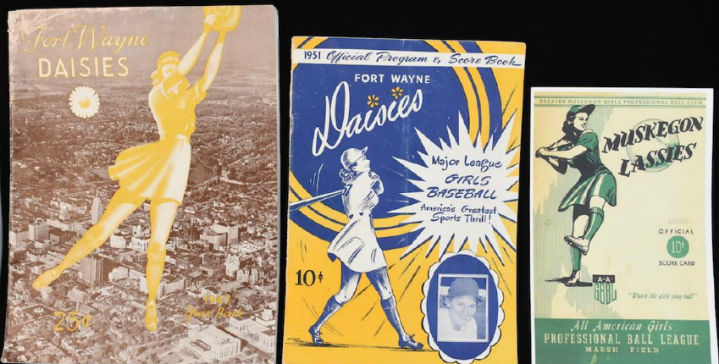 MILLSTADT, Ill. (AP) – Barbara Hoffmann owns a DVD copy of A League of Their Own, but has yet to watch it from start to finish.

She played two seasons for the South Bend Blue Sox of the All-American Girls Professional Baseball League, which inspired the 1992 movie, but even at age 87 still has too much competitive vigor to relive it as a spectator.

“It’s hard to watch because you want to play,” said Hoffmann, a resident of Millstadt. “I don’t even like watching other games because I want to be in the middle of it. It’s like part of me was gone and I couldn’t go back and watch it.”

Apart from some minor Hollywood modification, what she has seen of A League of Their Own is true to her experience—cantankerous managers, long hours on a bus, boarding houses and short uniform skirts that made sliding a risky proposition.

Mostly, she said, her time in the AAGPBL produced some of her fondest memories and most lasting friendships.

It’s been 66 years, but Hoffmann can still run down a list of teammates from the top of her head—with names like Shorty, Pee Wee, Wimp and Jeep among them—as if she was reading them off the Blue Sox’s program.

“After the games we’d stop and eat or, if we had a rainout, we’d got back to the hotel and play charades or something,” said Hoffmann. “It was really a close team. You’re with these girls constantly for all this time. Then, even after baseball, we did things together.

“I still talk to many of the girls who are still alive.”

Hoffman first joined the Belleville Southsiders fastpitch softball league. It was through her St. Louis basketball league, however, that Hoffman found her way to the AAGPBL in 1951. One of her teammates was Blue Sox catcher Shirley “Stovie” Stavroff, a lifelong resident of Madison.

“The players were like the scouts for the teams and it was Stovie who invited me to go to South Bend for a tryout,” said Hoffmann, a 1949 graduate of Belleville Township High School. “Players were to get $100 if they scouted a girl who could make the team. I don’t know if she collected her $100, but I tried out and was on the team that summer.” 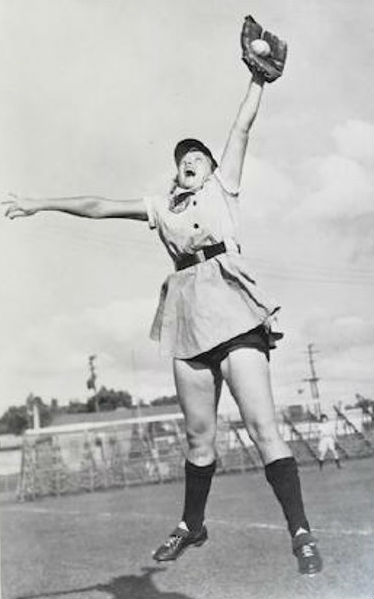 Hoffmann and the Blue Sox traveled the AAGPBL circuit from early May to September, playing a 110-game schedule in cities throughout the upper Midwest and Great Lakes region.

They played with a 10-inch ball instead of the major league standard 9¼-inch ball, and ran bases that were 80 feet apart, instead of 90. The pitcher’s mound—60-feet 6-inches away in the big leagues—was only 55 feet.

The players earned $55 per week, but had to pay for their own meals, even on the road.

“I roomed with another girl in a house that was maybe three blocks from the ballpark. The lady was a widow, so she rented us the room for $6 a week (each),” Hoffmann said. “We got to the ballpark at about 4 o’clock and had an hour, give or take, after the game to get back to our rooms. That was a team rule, but it was enough time to stop and get something to eat.”

A knee injury cost Hoffmann about half her first season and forced a position change from third to second base. She was limited to 49 games, but the Blue Sox went on to win their first AAGPBL championship.

Hoffman batted .192 with five doubles and a triple in 271 AAGPBL at-bats. She belted her only career home run in the 1952 All-Star Game.

“I hit a double, too,” she said. “That was a proud moment. I think the ball was a little livelier by the time I played.”

South Bend was on its way to its second straight championship when mutiny broke out in the Blue Sox dugout.

Jean Faut was the best pitcher in the league, and maybe the best in AAGPBL’s fleeting 11-year history. She also was the wife of South Bend manager Karl Winsch.

That alone didn’t spark the dugout uprising—“Jean was too nice a person,” Hoffmann said, “but it was the source of tension between Winsch and a few of his players. Especially Charlene ‘Shorty’ Pryer.

“In 1951, Karl was like one of the players. He would run the track with us, do the exercises with us,” Hoffmann said. “In ’52, he was just the opposite and some of the girls started speaking out if he said something they didn’t like or agree with. Shorty Pryer and Karl …  how do I say this politely? …  her and Karl didn’t always see things the same way.

“Things kind of snowballed, I guess.”

During a game in Kalamazoo, Blue Sox center fielder Betty Wagoner stood on first base when Winsch called to the bench for Pryer to pinch run.

“Shorty said, ‘Why should I run for her? She’s all warmed up and she’s as fast as I am, if not faster,’” Hoffmann recalled. “A lot of times, we would take our spikes off if we weren’t playing because they’d get to hurt after a while. So Shorty had to put her shoes back on to run for Betty Wagner.

“That’s when there was the big blow up. Karl told Shorty to take a shower and leave the team.”

In protest, Stovroff, Elizabeth “Lib” Mahon, Jane “Jeep” Stoll and Dottie Mueller followed Pryer out the door. Hoffmann took the evening to think about it.

“I don’t remember what was all said, I just remember thinking that what happened wasn’t right.”

Hoffmann didn’t set foot at South Bend’s Playland Park again, not even as a spectator.

Behind Faut’s 20 wins and 0.93 ERA, the Blue Sox repeated as AAGPBL champions, but the league folded just two years later. So did Faut and Winsch’s marriage.

By that time, Hoffmann had moved on to the South Bend Hoosierettes basketball team, which won a national championship in ’56. She also settled into a job at the Bendix Corporation in South Bend, where she stayed for 34 years.

“I started bowling with two of the girls I played baseball with,” Hoffmann said. “We did a lot of traveling later on in the ’60s and ’70s. A lot of the girls were great athletes and were standouts in other sports.”

Hoffmann moved back to southwest Illinois in 2002 to be close to her nieces and nephews and work the local antique circuit. She has a table at the monthly Belle-Clair Fairgrounds flea market.

On the dining room table in her small Millstadt home, beneath the framed photos of her Blue Sox teammates, Hoffmann has stacks of baseball cards and 8-by-10 photos ready for the autograph requests she still receives in the mail.

As she signs one of them and stuffs it in an envelope, she unknowingly confirmed a famous line from the movie she doesn’t think she’ll ever finish watching.

“What I remember is we were all very professional,” she said. “It wasn’t like there was crying going on in the dugout or anything.” 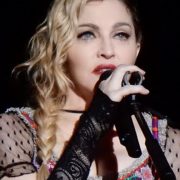 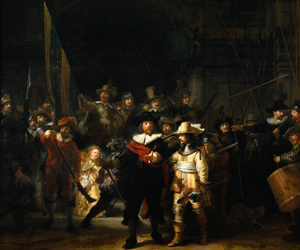 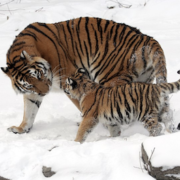 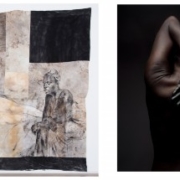 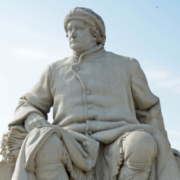 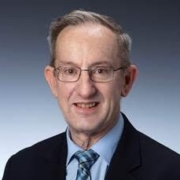