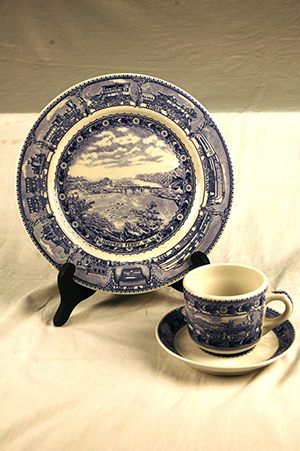 Here’s someone who followed that line of thinking: Leigh Greer, who said, “All my life, when I’ve had dinner parties, my favorite thing was setting the table.”

She turned that passion into a business, setting table after table for fun and profit.

Her shop, Table Seven, opened a year ago in November in Ghent’s vibrant and growing 21st Street shopping district. Greer specializes in tabletop antiques, selling everything for dining and, now, renting things, too.

The very specific niche market she created has caused a clamor for her things. Customers are charmed and inspired by the enticing narrative vignettes she creates with dishes and related accessories.

She does it like this: Antique hotel silver is featured beside a stack of well-traveled suitcases and an old dinner menu from a long-closed restaurant. A book about Grace Kelly joins other objects that play off the color of its jacket or items the movie star princess might have used—a gilt mirror, a dish that says “Monaco.” A few wooden darts with real feathers are tossed into a bowl, setting a manly tone shoulder to shoulder with an antique champagne bucket. There are barware and bridal sections and an array of antique silver eating utensils for tots.

What Greer has always thought of as play is actually masterful merchandising.

Her background is as a preschool teacher, so she has had plenty of practice keeping the attention of a young audience, an art form not unlike harnessing a following of fickle and cash-conscious consumers who still want to put on a good show for guests.

Need a vintage cheese knife? She has it. Want a plate from a hotel where your parents spent their honeymoon or a Navy ship on which your father served? Chances are, she can find it.

Looking to rent 100 cups and saucers and cake plates to go with them? Yes, again.

That very thing, a September tea for 100 at the Woman’s Club of Portsmouth, was her biggest rental order to date.

So how did this all begin?

While growing up in Greenville, S.C., she watched her mother and grandmother tend the family’s antiques.

“My mother and I would go around to antique shows and shops when I was in high school,” she said. As Greer grew up, her mom would preview stores, then bring Greer there to choose.

Eventually, Greer moved here and taught for years at Loch-Meadow Kindergarten at Church of the Good Shepherd on Hampton Boulevard and later worked at her own church, First Presbyterian, on Colonial Avenue.

Along the way, she fell in love with hotel silver and restaurant china. She started indulging her passion, buying a spoon here, a teacup there, thick, storied and sensible pieces by Buffalo, Syracuse and Shenango that had served so many guests so well at so many establishments.

In an antiques shop on Granby Street, nearly a lifetime ago, she bought a hotel creamer from the Waldorf Astoria, the posh New York City hotel. She thought it was just so, so cute.

Soon she assembled a small collection of hotel china and, eventually, had so much of it that about five years ago, when a friend in her Norfolk neighborhood had a Christmas craft show, Greer set up a card table there.

“I took almost all the silver and china I had at the time. I wanted to see if other people liked it as much as I did, and it was very successful,” she said.

Figuring she might make a go of this as a business, she traveled to shows in Washington, Richmond and the Shenandoah Valley, and eventually rented a booth at an antiques show at the Virginia Beach Convention Center. Shoppers snatched up mess-hall china from every branch of service, from venerable places like The Greenbrier resort, from airlines long out of business and ships that had made their final ocean journeys. Buyers were thrilled to find this memorabilia.

But, eventually, all that packing and loading and setting up for two-day events got old.

“It got too hard to decide what to take for shows,” she said, “and, in the back of my mind, I started thinking about it, about having a shop. It was not something I had ever dreamed of. It just evolved. But I’m 55, and they say in your 50s is the best time to start something new in your life.”

Now, after 12 months on the west end of 21st Street, she has had a great response. She settled into an expanding area of retailers that includes restaurants and eateries, another antiques hub that moved here from a few blocks away. It includes Lana Hobbs Wolcott Antiques and Michael Millard-Lowe in the Antique Design Center with American Interiors Ltd. And, coming soon across the street, Greer is delighted to tell visitors, is yet another new neighbor, the upscale Fresh Market, with gourmet grocery shoppers who she is sure will need her pretties.

And there are lots of them, including books with dining themes.

“I buy anything that I think will fit,” she said. She mixes in items to accessorize tables, anything that has to do with entertaining, parties or special occasions. She offers limited and carefully selected new merchandise, such as the 10 different things she chose at this summer’s gift show in New York, items like charger-size paper place mats with colored borders of period dining chairs; sparklers; unusual tea towels; and metal letter tabs that can spell out initials or messages, like “Bon Voyage.”

For serving cheese or appetizers, she carries waxed papers. For football parties, there are paper runners marked off like a playing field. For Thanksgiving dinners, she has paper table toppers that family and guests can write on to say what they are thankful for. This Christmas she’ll feature about a dozen or so different selections of food items, including a Louisville, Ky., bourbon cake and beef jerky in “really cool packaging” that she’s sure will be a hit with men.

Her tabletop rental business began last spring after she did a vintage “Mason-jar look” May wedding reception at Talbot Hall in Norfolk and provided china, silver and paper place mats. More weddings followed, then brides began asking if she had what Greer now calls “froufrou” or flowered vintage china.

“So I thought, well, I’d better get froufrou,” she said, and laughed. By the time the Woman’s Club of Portsmouth called to rent cups and such for their please-pass-the-sugar-tongs, 100-person tea, she had plenty. That thinner china rents for $1.75 per plate. Hotel china, still her favorite, is $2.

She’s networked her way into the local wedding industry to expand the tabletop rental aspect of her business and, in the shop, creates holiday-themed tables for her retail customers.

For Thanksgiving, she imagines hostesses coming to her for paper place mats that look etched with sepia brown turkeys, for big turkey platters, or for grill plates, thick and sectioned off to keep servings of cranberry sauce from running into the turkey dressing like on the ridged Shenango china plates she found that used to clatter down the cafeteria line at a North Carolina elementary school.

For Christmas, she’s stockpiled all her red china and white china with red trim, and ordered vintage-look, tabletop bottlebrush trees. Last year, she set up fantasy tables for six, then did it again with glitter and glam toward New Year’s Eve. Each time, almost everything on them sold. So did nearly all her tiny glass and crystal salt cellars.

And, for a personal touch, she’ll track down more items to fill customer wish lists.

“It’s so much fun when I find things that people want,” she said. “I have several special customers. And when I call them, they’re here within an hour.”

Information from: The Virginian-Pilot, http://pilotonline.com 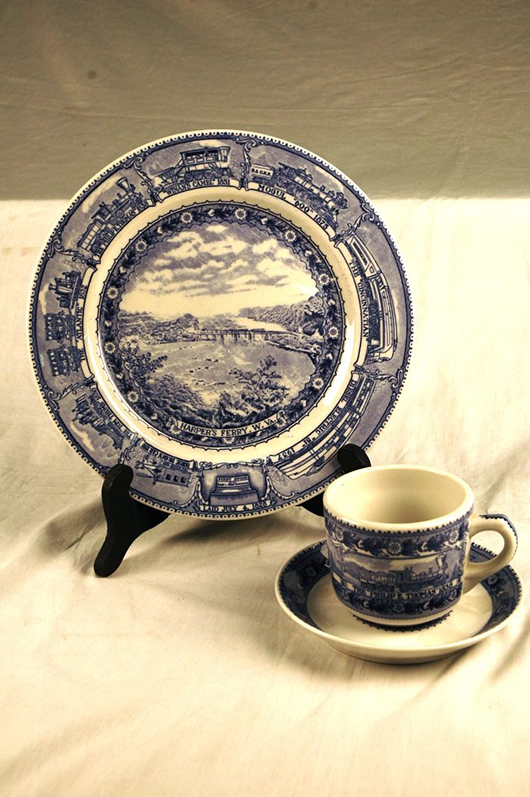 2 killed in crash of vintage fighter plane in Texas

Wang Jianwei selected for commission at the Guggenheim
Scroll to top